Accessibility links
Turn, Baby, Turn: Techniques To Get That Breech Baby Head Down : The Baby Project Since Jolivette Mecenas found out her baby is breech, she's experimenting with ways to get him head down. That includes putting a frozen bag of vegetables where the baby's head is located, using music to lure the baby down, hypnotherapy and what's called a "version," where a doctor rolls the baby.

Turn, Baby, Turn: Techniques To Get That Breech Baby Head Down

Turn, Baby, Turn: Techniques To Get That Breech Baby Head Down 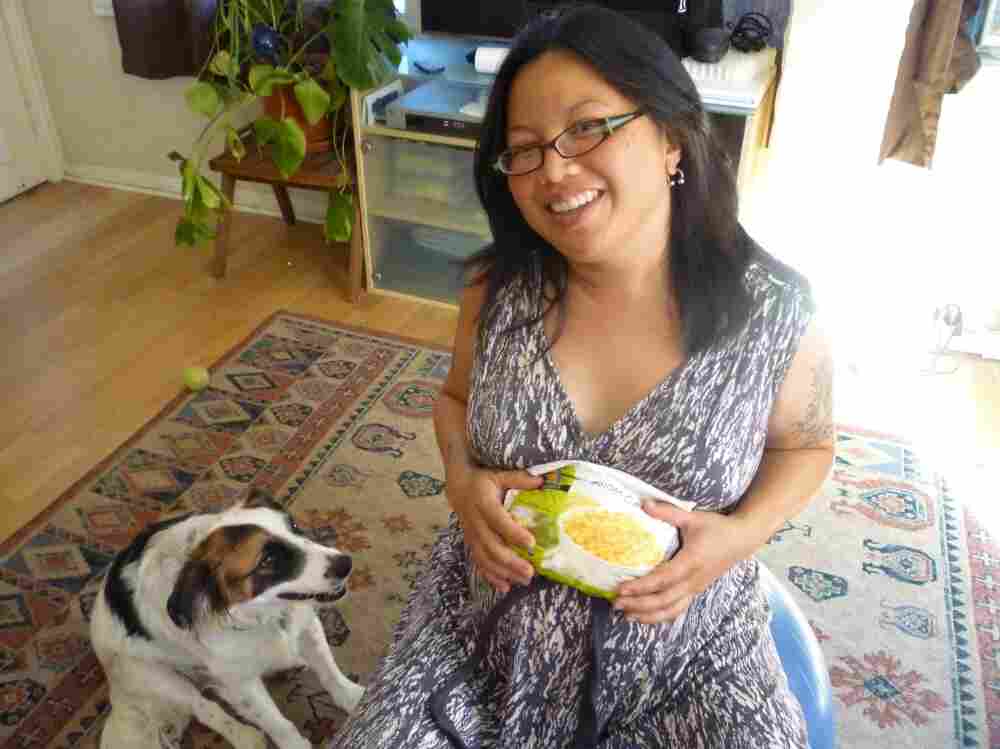 Jolivette sits on a birthing ball and put a frozen bag of corn on the top of her belly, to get the baby to move down. Jolivette first tested out the frozen-veggie technique on her dog. Courtesy of Jolivette Mecenas hide caption 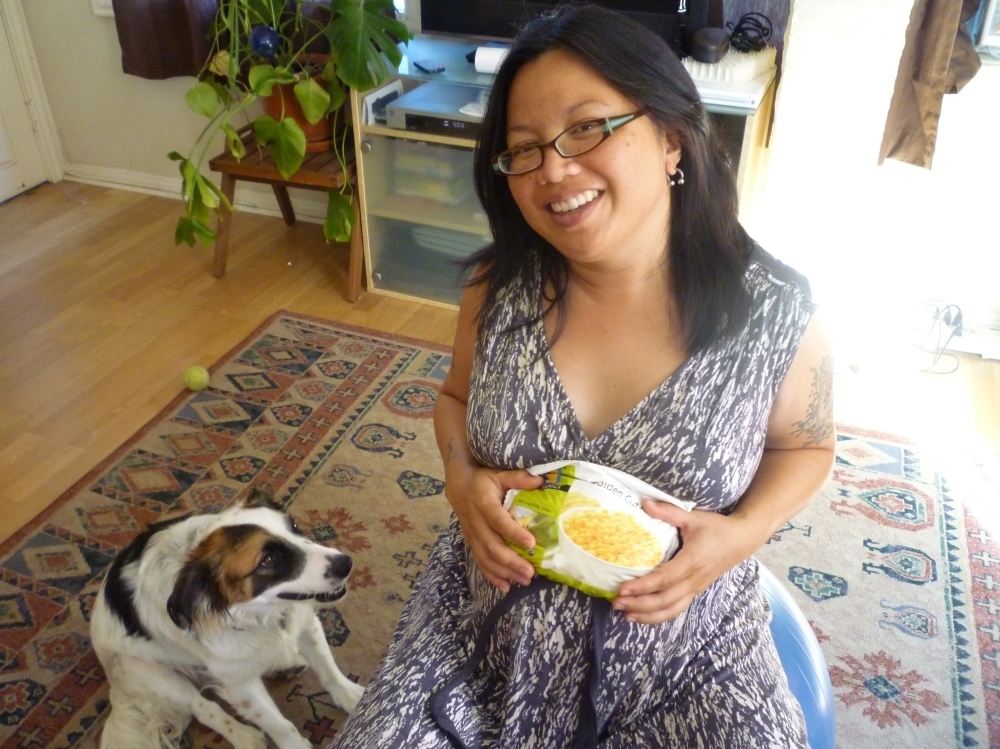 Jolivette sits on a birthing ball and put a frozen bag of corn on the top of her belly, to get the baby to move down. Jolivette first tested out the frozen-veggie technique on her dog.

Jolivette says she planned to continue writing about how she and her partner Charlyne chose their donor, a story she began telling in her last post. But she's postponing that topic to update readers on how the baby is doing these days.

Heart rate is good, amniotic fluids look good...and he's breech! This was news to us. We thought that he had been in the ideal head down position for a few weeks now, but either we (including the hospital midwife) were mistaken or he had turned again. In any case, his head is positioned at the top of my abdomen, and he is presenting buttocks first, which means his rear end is at the top of my cervix — not ideal for a vaginal birth.

In fact, we left the doctor's office that day with two new appointments: the first is with one of the hospital doctors for an external version (more on that below); the second is for a possible C-section in my 39th week (soon!).

Remember my post about our HypnoBirthing birth plan, and the relaxed rainbow-themed natural birth? Well, I also wrote about being flexible, and now it seems we have to prepare for the possibility of a surgical birth, without the rainbows.

I came home from the check-up a bit downhearted. It's not that I have my heart set on a natural birth, but a C-section doesn't sound all that fun. Really, I would love to fast-forward the entire birthing process and just get to that happy scene with my baby on my breast and me and Charlyne beaming at him. Of course, I tell myself, either way it doesn't matter, as long as he's healthy in the end. But it does matter, because it's a factor in this experience that I can't control, which I need to accept. Baby is going to make up his own mind if and when he's going to head on down in the right position. We can, however, help coax him along.

According to several pregnancy books, most babies settle in the head-down position for their descent down the birth canal by 36 weeks. Our little guy is in the stubborn 4 percent or so who remain head-up, despite gravity tugging on his big baby head. After the 37th week, the possibility of babies turning on their own lessens, but there are some techniques to try. I found the educational site SpinningBabies.com, a helpful source of information on fetal positioning.

As I write this I am sitting on a birthing ball (one of those big inflatable balls otherwise known as an exercise ball) with the computer resting in front of me on the couch. Sitting on the birthing ball is great for when you're in labor, but it also promotes good posture during pregnancy. And good posture makes it easier for baby to position himself head down, face down (facing your spine), which is ideal for easier birthing.

The hospital midwife also suggested placing a bag of frozen vegetables on the baby's head, a tip suggested by various online sites as well. The idea is that baby will get uncomfortable with icy veggies on his head, and he'll move away from the sensation, hopefully moving 180 degrees into the position he needs to be in. I tested this out by placing a bag of frozen corn on my dog's head, and sure enough, he hated it and scooted away immediately. Good enough test.

Combining both techniques, I sat on the birthing ball with my spine straight, belly out, legs wide with feet firmly planted, and pelvis open. A bag of frozen corn rested on the hard spot where I could feel the baby's head. Like the dog, the baby started to move immediately. I can't say he flipped around like I wanted him to, but when I touched the same spot on my abdomen 10 minutes later, it was soft as if the baby's head had migrated elsewhere, at least a little. 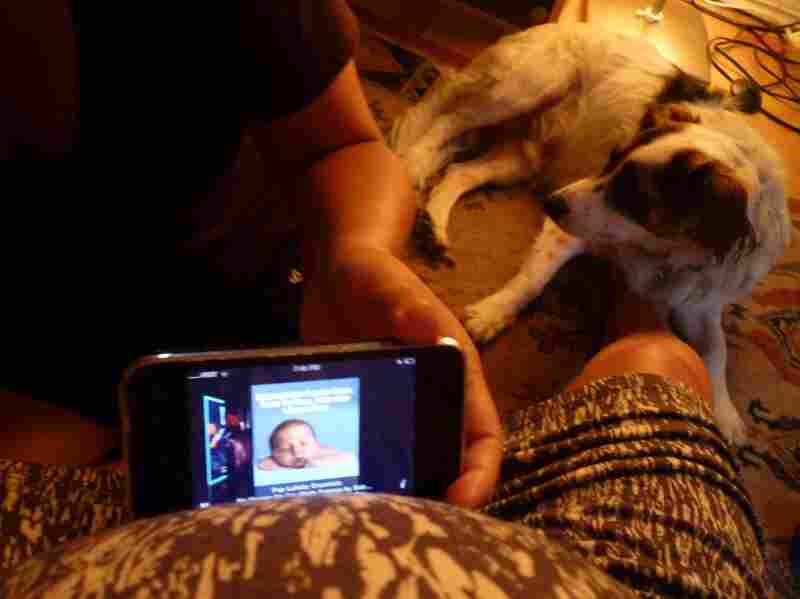 Jolivette's partner Charlyne holds her phone to the lower part of Jolivette's belly. They hope music like Bob Marley's "No Woman, No Cry" and Elton John's "Rocket Man" will lure the baby down. Courtesy of Jolivette Mecenas hide caption 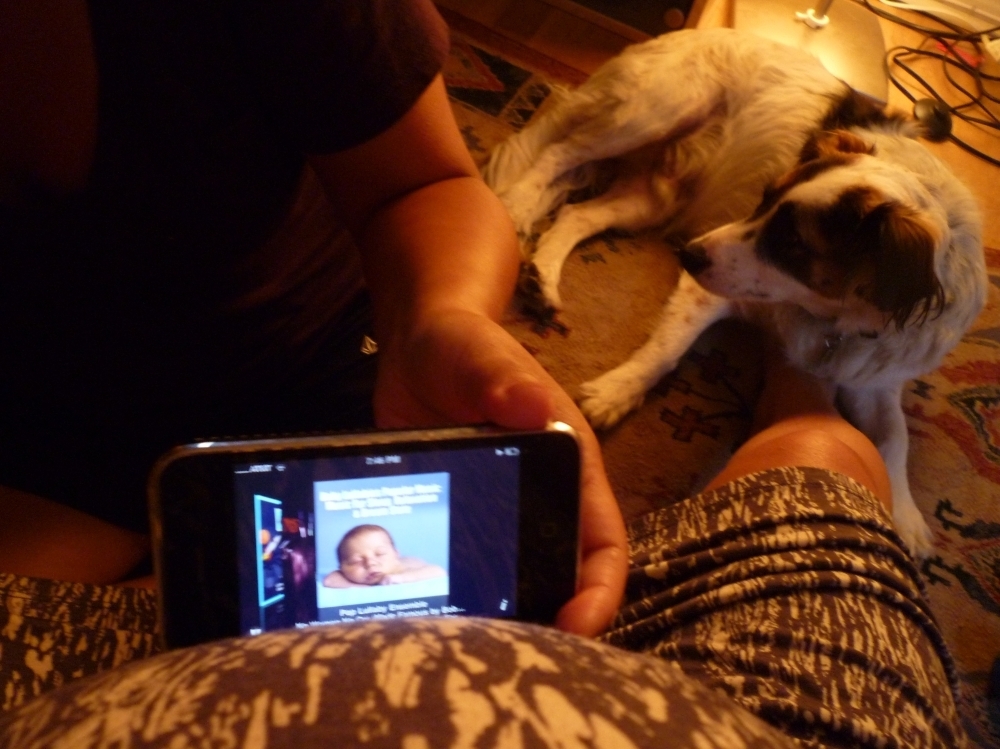 Jolivette's partner Charlyne holds her phone to the lower part of Jolivette's belly. They hope music like Bob Marley's "No Woman, No Cry" and Elton John's "Rocket Man" will lure the baby down.

Later that evening, we tried the next "turn, baby, turn" technique, what I call the "Pied Piper" – using music to lure him down. Charlyne downloaded baby-appropriate music from iTunes: lullaby versions of Bob Marley's "No Woman, No Cry" and Elton John's "Rocket Man." As I sat on the birthing ball, she held her iPhone to the bottom of my belly, near my pelvis, and played what sounds like muzak for babies. The baby seemed to respond equally to Elton John and Bob Marley, squirming gently around. Again, I don't know if he moved in the right direction, but we'll keep trying.

We're also considering hypnotherapy, since our HypnoBirthing teacher is a hypnotherapist. Not sure how it works, but I believe the hypnotherapist helps mom to relax the uterine muscles, and to visualize the baby turning head down. If hypnotherapy works, amen! Because that means I can avoid the external version — or version for short — that I'm scheduled for next week.

A version is when an experienced doctor places his hands on your belly, one hand by the baby's head, the other by the baby's buttocks, and rolls the baby to the head-down position. Mom is given medication to relax her uterus, and the baby's heart is monitored. It's not always successful, and there may be some risks to the baby, and some pain to mom, which made me hesitant. But the midwife urged me to try it because if successful, that means I could have a normal delivery, which in her opinion was more ideal than a surgical delivery, and I do agree. Plus, she assured me that the doctor scheduled to perform the version is top-notch, which made me more confident about the whole thing.

So let's review (indulge the professor in me for a moment, please):

We're keeping positive, and we'll see what works! In the meantime, I'll get started on part 2 of the donor story, promise.