Accessibility links
Parents Sound Off On The Economics Of Child Care : The Baby Project To tap into the hushed discussions about day care that take place alongside soccer fields or among trusted friends, All Things Considered co-host Michele Norris assembled a group of middle-class parents. And some have advice: Be flexible and start thinking about it before you get pregnant.

Pregnancy And Childbirth: Business And Economics 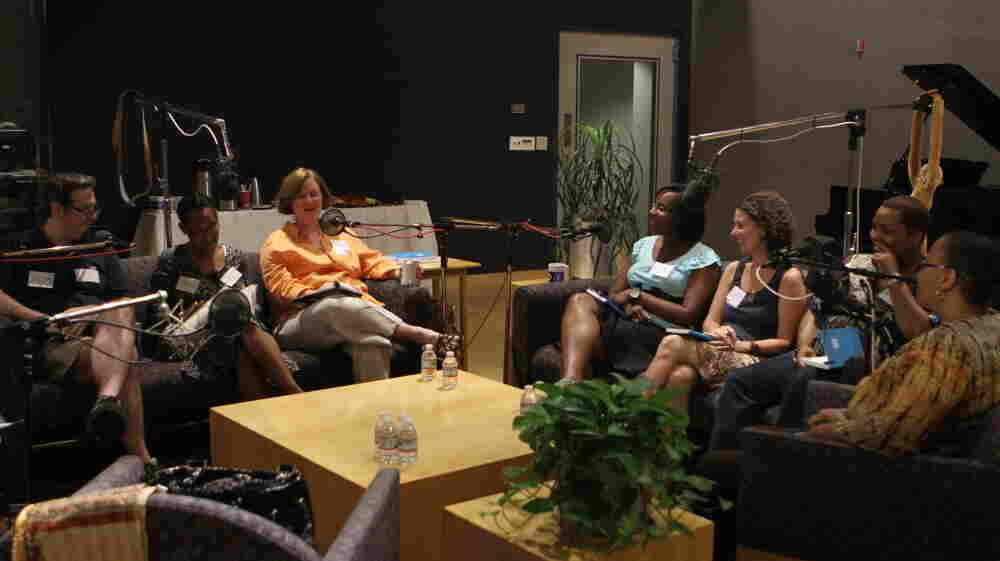 Yesterday, All Things Considered ran the first part of a two-part round table with a group of parents (and one grandparent) to discuss child care. You can get descriptions of each participant on Part 1, which focuses on the emotional decisions of finding care and how it's a juggling act. Part 2 focuses on finances.

To tap into the hushed discussions about day care that take place alongside soccer fields or among trusted friends, All Things Considered co-host Michele Norris assembled a group of middle-class parents. (Part 2 of the conversation airs tonight on All Things Considered.) All are from Washington, D.C., where day care costs can be quite high.

But here's the conundrum: One thing that the group agrees is on is that nannies, babysitters and day care providers don't earn enough money based on what they do. And yet, the group also agrees that care costs too much money.

Adam Graham, a former stay-at-home dad who now works as a high school teacher, says that he put his second daughter, who is now 9 years old, in a Montessori school and it was probably in excess of $10,000 a year.

"I don't know if I paid that much when I went to college," he says. "I'm a little bit older and I went to an in-state school, but still."

Kelly Hruska, who has a 7-year-old daughter and a husband on active duty in the Navy, says she has a lot of friends who have nickle-and-dimed whether it makes financial sense to go back to work.

And some are lucky. The grandmother in the group says she and her daughter and son-in-law have worked out an "ideal situation." Sharon Johnson says her daughter and son-in-law insist on paying her $200 a week, even though she would "keep him for free." Johnson says her daughter says she doesn't want to take advantage of her — they can afford to pay her and it gives them peace of mind that their son is with his grandmother. Johnson says they live across the street from each other, so she can show up in her pajamas if she's late — and she does everything, including laundry and making dinner. She says if she were to provide a day care center, she wouldn't want to overcharge parents.

Sharon Johnson talks about her ideal situation in taking care of her grandson.

For parents who are considering having children, Stacey Ferguson has some advice: "Stop and think about child care right now." She says her "only regret in life" is that she didn't get to stay at home for the first few years of her child's life.

Stacey Ferguson gives advice to new parents and talks about her only regret in life.

Graham also has some advice: "Make sure you're a flexible person. I've learned a lot more flexibility and learned that sometimes something that you may have said 'no' to at the beginning — 'I don't think I could do that' — well, when you have to, you do, especially with child care and taking care of your child. The bottom line is it has to be done, whatever it is. So, be flexible."