Accessibility links
I Had A C-Section And I Loved It : The Baby Project Barrie Hardymon, an editor for Talk of the Nation, says despite her peers' disapproval, she was dying to get her child into the world with a minimum of fuss. 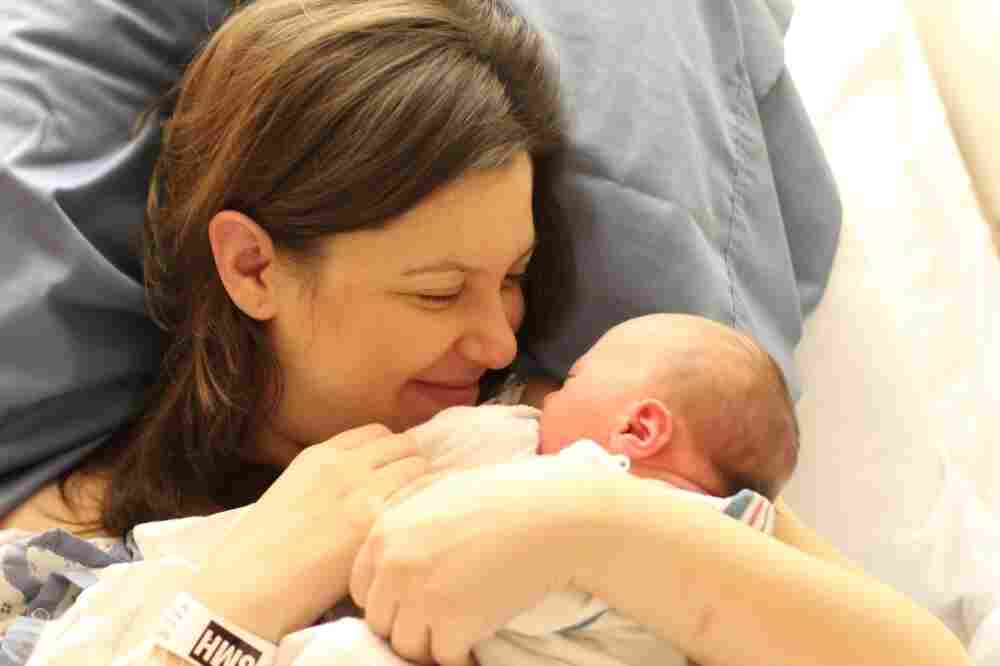 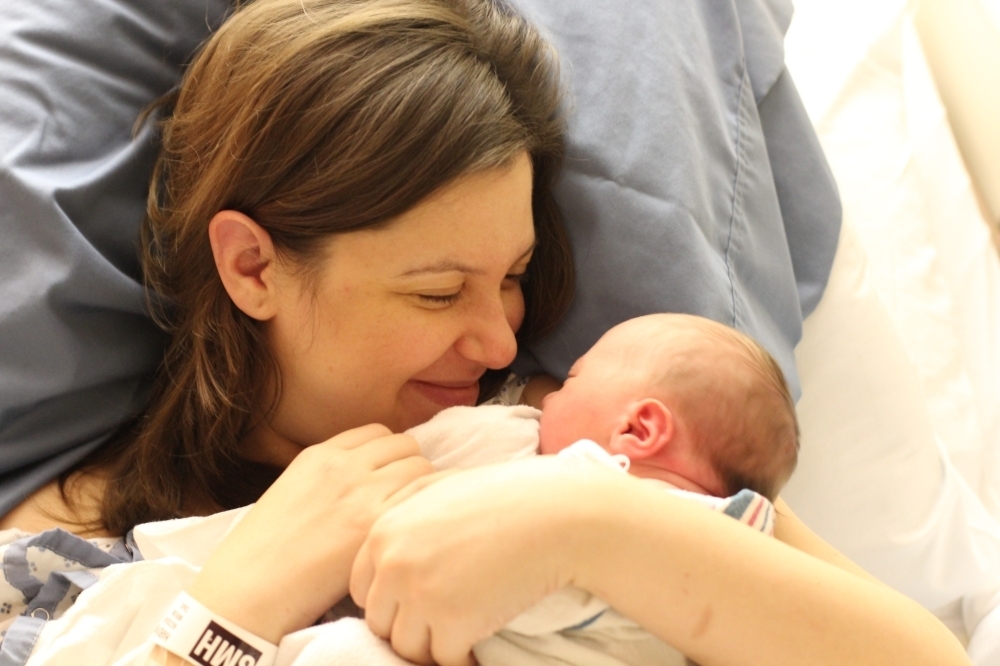 Barrie Hardymon with her newborn son, Hank, in March.

Guest blogger Barrie Hardymon, an editor for NPR's Talk of the Nation, sent us a note arguing that the Baby Project has placed too much emphasis on birth stories that are natural, or planned to be natural. "Birth has become so politicized," she wrote, "that it's not OK to even intimate that you had a scheduled C-section." She wanted the NPR project to reflect a variety of experiences, and so offered us hers — the guilt-free C-section.

There are women who love being pregnant. They feel voluptuous, earthy, secure. I was not one of them. I was nauseated, cranky and terrified.

I first knew that I was failing at pregnancy when I attended a highly recommended prenatal yoga class at a local studio. The room was filled with glowing, curvy ladies, calmly resting hands on stomachs. I sat on the mat and tried to look pleasantly confident. Before the class began, we went around the room and introduced ourselves. (This was not a good start. I had never had to do this in my spin class.) Several of the women were planning home births. I leaned over to one of them and whispered, "But how will you get an epidural?" She looked appalled and scooted a little farther away from me. When, at the end of the TWO-HOUR class, we began dancing in a circle and singing, "beautiful, bountiful me," I lumbered sulking out the door, and wondered if the bar next door would feel funny serving a visibly pregnant woman a beer.

When I got home that night, I thought about all the women in the yoga studio who were planning the delivery of Ricki Lake's dreams — drug-free, ancestors whispering softly in attendance, gentle music playing, a delicate whoosh in the birthing pool.

Many of my friends, my dear friends, have made similar choices. I love and respect them — but reader, this was not my dream. Being pregnant exposes you to a layer of the world you had no idea existed — those whispering, wise women who have done it before. All of them, bless their hearts, have got some advice for you.*

They offer you nausea remedies, pillow recommendations and favorite Tums flavors. But much of their advice has to do with — brace yourself — your vagina. It is impossible to get away from it — any conversation about birth has to do with that enormous trial your nether regions must go through.

For the most part, when I entered these conversations with the wonderful women who offered me advice and support, I felt gratitude. But rarely did I identify with the birthing choices that were the norm for some of my dearest friends. How, I thought as I tucked my yoga mat in the back of the closet where it still sits, was I going to get this baby out of me? At a party, a woman I'd just met asked me what my "dream delivery" was. I mentioned Mad Men's much maligned "twilight sleep." It seemed perfect to me (minus, maybe, the enema): Go to sleep, wake up not pregnant, baby in arms. I received the same appalled look from her that I'd gotten at the yoga studio.

"Don't you care about your birth experience?"

She sniffed and told me that both her children were born without intervention. Intervention! I was dying to have someone intervene — as soon as possible — and get this child into the world with a minimum of fuss. I was clearly destined for at least an epidural, and if there was any way I could get Betty Draper's drugs, I'd be thrilled. 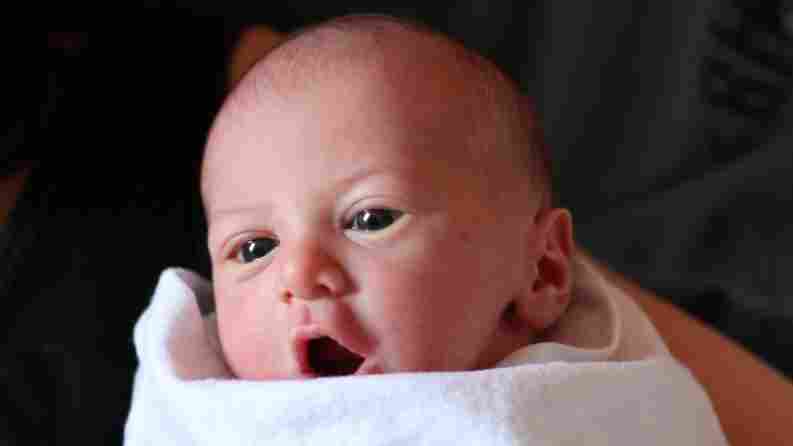 Hank was breech, so Barrie scheduled a C-section — and she says she was happy about it. Courtesy of Barrie Hardymon hide caption 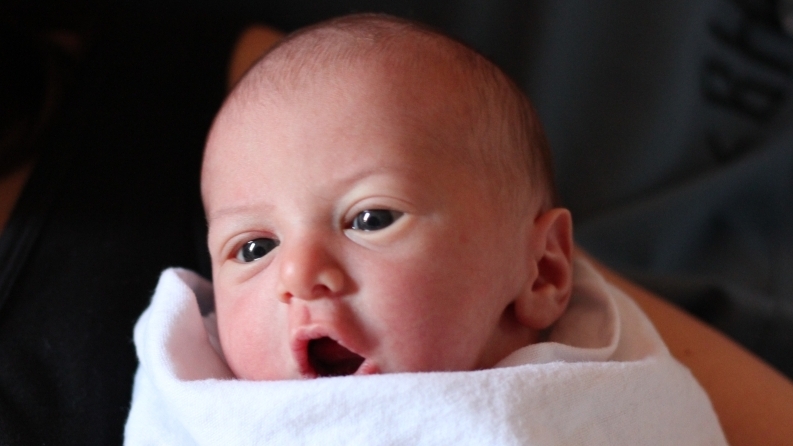 Hank was breech, so Barrie scheduled a C-section — and she says she was happy about it.

And then, at 33 weeks, my doctor had news for me. The baby was breech. Although I was obviously worried about any risks this might create for him, I had to admit that for me it was occasion for enormous relief. I scheduled my C-section right away.

On my BabyCenter "mommy boards," other women reassured me that the baby might turn, and that there were things I could do to help the process along. "That's OK," I wrote. "I'm OK with cesarean." Others told me to try to have the baby vaginally anyway — women had been doing this for thousands of years without medical intervention. Hmm. You know what I bet those women would have liked, as they clutched at twisted bedsheets and screamed for hour upon hour, only to, in some tragic cases, have a baby get stuck in the birth canal? A C-section.

One woman went so far as to say that I was selfish not to even try to turn the baby. "Some babies are breech because they feel their mother's ambivalence. Motherhood," she wrote, "isn't supposed to be easy." Her signature read, "hippie, feminist, home birthing, working mom!" This was really confusing. You mean, we're supposed to start martyring ourselves even before the baby is born? We're still mad at Eve for eating that apple?

Worse, I thought, we're mad at each other. For every woman that whispered a recipe for ginger tea, there was one ready to tell me I was already failing at motherhood — before the baby was even born. I couldn't even get him into the world properly. How would I ever get him to college?

Women who choose C-section, especially those who do it for no medical reason, have more in common than they think with women who choose home birth. At opposite ends of the spectrum, both are accused of being selfish or ignorant, of putting their babies at risk. The two groups would be natural allies for women's choices, if they could only stop griping at each other.

My son Hank was born at 8:44 a.m. on March 1. It took 35 minutes, a lot of tugging, and some mild nausea. I had a good night's sleep and a pedicure before the birth. (Unfortunately, I heaved a little from the nausea when I first saw him, but I don't think he took it personally.)

Bright-eyed and healthy, he nursed well and gained his birth weight back in record time. I weathered the ups and downs of the postpartum hormone drop, and found myself up on my feet within a day and a half. When I got home, I forgot to take my Percocet. The pain didn't feel much worse than the time I took a really hard abs class. (In which, I might add, I did not have to introduce myself at the beginning.)

When people give me a pitying look when I tell them about my C-section, and ask if I had trouble bonding with the baby, I've learned to smile sweetly, and tell them I had the perfect birth experience. After all, Hank and I were clearly bonded even before birth — his breech turn was the first gift he ever gave me. Motherhood, in all its wonderful terror, is hard enough. Better to remember what all we parents have in common — however our babies arrive, the moment afterward, equal parts relief and desire, wriggling, warm and contented upon our chests.

Barrie Hardymon is an editor for NPR's Talk of the Nation.