Accessibility links
2 Chainz: A Pop Star For All Of Us : Best Music Of 2012 He laces his bouncy, terse rhymes with a charisma reminiscent of another musician — Ringo Starr. 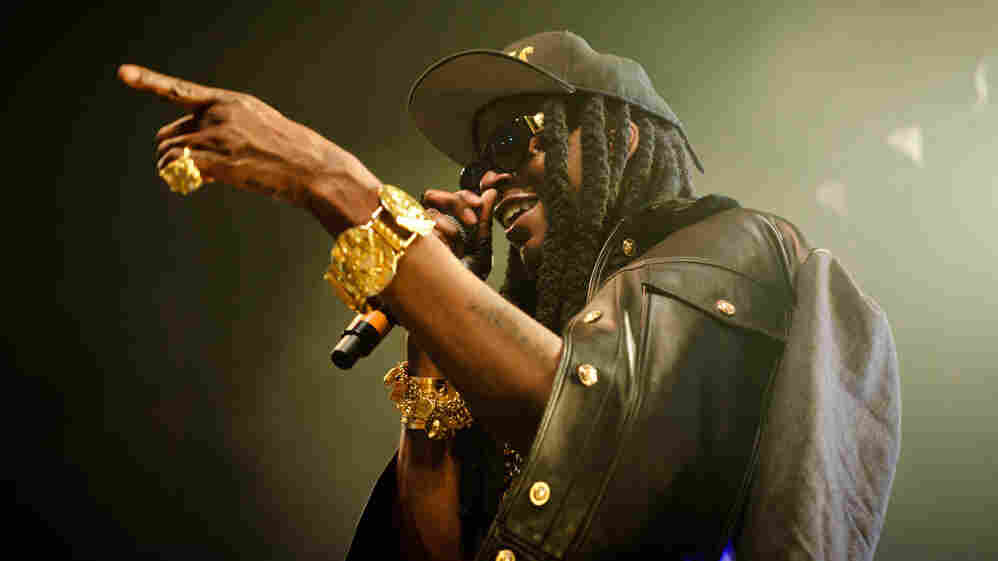 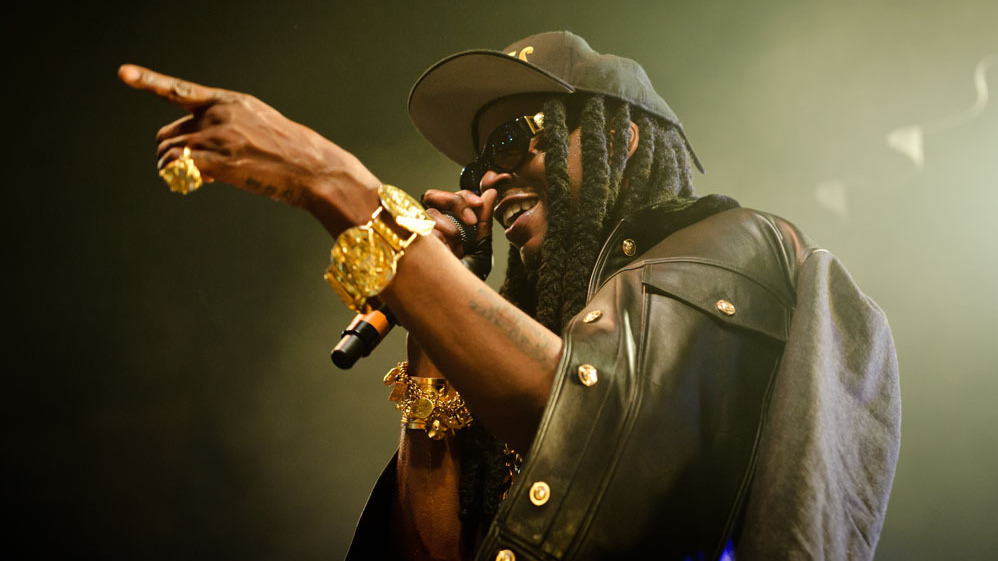 2 Chainz performing in London in November.

Advisory: The videos on this page contain profanity and explicit imagery.

The rapper 2 Chainz stands six feet, five inches tall. He wears dreads down his back and designer threads. Born Tauheed Epps, he has a presence before he ever hops on any microphone. But once he's there he laces his bouncy, terse rhymes with a humility and charisma that reminds one of another musician — a British drummer a foot shorter: Ringo Starr. The success of both artists, one in a '60s rock 'n' roll era and the other in a 21st century rap era, is a testament to people who consume pop music, which is all of us.

Ringo, with his innate ability to combine personality and art, was integral to one of the most creative and influential bands of the last 50 years, though some wouldn't recognize it until years after. He's known more for his friendly smile and carefree attitude than he is for his chops. Across time and genre, it's always been easy to write off the 2 Chainzes and Ringos of the world when the Kanyes and Kendricks and Pauls and Johns stand right next to them. Despite varied opinions on whether the Atlanta-based musician is a technically proficient rapper or not, he certainly had a productive year, appearing on nearly 100 tracks. Not every song was groundbreaking or praiseworthy, but certainly, just as Ringo did over the course of his career, in 2012, 2 Chainz reminded us that we don't always want to be so serious.

2 Chainz began this year at the finish line of an impressive evolutionary process, signing a solo record deal with Def Jam. But we heard his voice most often in group efforts. His most visible appearance was the anchor verse of G.O.O.D. Music's summer banger, "Mercy." The three other rappers on that song — Kanye West, Big Sean and Pusha T — are widely considered to be more skillful rappers, but it was 2 Chainz who stole the show with lines like "ketchup to my campaign, coupe the color of mayonnaise." His first album under his major label deal, Based On A T.R.U. Story, was released in August, to decidedly mixed reviews, though it went gold by December.

Five years ago, performing under the name Tity Boi, 2 Chainz had already hit the Billboard 100. His verse on "Duffle Bag Boy," which featured a then-on-fire Lil Wayne, made it look like his group, Playaz Circle, was about to begin its ascent, but nothing further came from the outfit. In an episode of MTV's This Is How I Made It, 2 Chainz recalls the rush. "It was moving so fast but deep down inside in my heart, I felt like it wasn't my time. I felt like this Lil Wayne's time," he says. "I just knew it wasn't my 15 minutes."

He's changed very little, stylistically, between then and now. He made some slight tweaks to become more mainstream friendly — a slowed cadence, a bit of content cleaning — but preserved his unmistakable Southern twang. The style of music he makes has been moving toward the mainstream as well. Trap music has been carried by the bass-heavy sound of producers like Lex Luger, Mike Will, Zaytoven and Drumma Boy, nudged forward by national media attention and commercialized by pop's big business of the past couple years, EDM.

While all that was happening, there was also a reshuffling of the Atlanta rap scene's major players. Gucci Mane, who largely inspires 2 Chainz's sound, served jail time on several occasions — one sentence began less than a month before his first major label album was released. T.I. too. Young Jeezy slowed his pace, taking three years to release his long awaited Thug Motivation 103 in December 2011. By then the 2 Chainz campaign was in full effect.

His allure is in the accessibility of his songs. What he makes is not so deep into the trap spectrum that it puts off mainstream interest — a pitfall that's limited the reach of his predecessors, like Gucci and Yo Gotti. It's not intellectually demanding, offering more pleasurable music experiences to more people more often. People love to love him. His energy is contagious, and he calls his "big booty" girlfriend "Big Booty."

This year, 2 Chainz's grin infiltrated rap music from coast to coast. He guested on over 70 songs, starting with T.I.'s New Years Day mixtape F--- Da City Up and continuing with artists such as Rick Ross, Curren$y and Gucci; West coasters E-40, The Game and Tyga; East coasters Jadakiss and Meek Mill; Midwesterners Wiz Khalifa, Jeremih and of course the men of G.O.O.D. Music.

In an August Billboard article, Keith Muphy quotes Michael "Sha Money XL" Clervoix, VP of A&R at Def Jam: "I haven't seen anything like this since Lil Wayne reinvented himself. Everybody in the hip-hop world is embracing 2 Chainz just like they did when Wayne was doing features on everybody's songs." Clervoix was responsible for signing the rapper at the top of the year.

Despite the outpouring of support from his peers, his album, Based On A T.R.U. Story, was mediocre at best. Pitchfork gave the project a 4.5 out of 10; the Los Angeles Times 1 out of 4 stars; Rolling Stone, 3 1/2 out of 5; XXL magazine gave it a L on a scale that goes up to XXL and SPIN rated it 6 out of 10. If record sales are any measure of quality, in terms of first week sales, 2 Chainz came in behind Nicki Minaj, Kendrick Lamar, Rick Ross, Meek Mill, G.O.O.D Music and Nas.

Still, commercial radio ate the rapper up. It was nearly impossible to make it through more than five songs without at least 12 bars of 2 Chainz coming over the airwaves. He was the second artist of 2012 to knock himself out of the top spot of the Billboard R&B/Hip-Hop songs chart, replacing "Mercy," with "No Lie," his single featuring Drake. In addition, the rapper saw the chart five other times this year on Juicy J.'s "Bandz A Make Her Dance," his Kanye duet, "Birthday Song," A$AP Rocky's "F---in' Problems," DJ Drama's "My Moment" and Nicki Mianj's "Beez In The Trap."

In a feature published in the Fader two months before B.O.A.T.S. was released, Andrew Nosnitsky reported that the rapper estimated recording six to eight guest verses each week. "Artists pay 2 Chainz to rap on their record because he's hot, and how can he not be hot if he's on all of these records?" Nosnitsky writes. "It's hard to find a corner of the rap industry that hasn't been infected with the need to adorn its tracks with his trademark seething."

He joined Drake on his Club Paradise tour earlier this year, as well as Nicki Minaj's Pink Friday tour. And when all the supporting was done, he did a tour of his own — his first headlining venture. The Based On A T.R.U. Story tour sold out in every city, and was extended for a second leg. He played Jay-Z's Made In America, Rock The Bells, OVO Fest and SXSW, in addition to performances at MTV's VMAs and BET's Hip-Hop Awards (from which he brought home three awards, including Rookie of the Year). He even reeled in three Grammy nominations: Best Rap Performance and Best Rap Song for "Mercy" as well as Best Rap Album for B.O.A.T.S.

Anyone can write a song — that is, connect rhyming words in a coherent fashion and devise a melody — but to create music that actually touches people and resonates in a way that goes beyond the level at which the listener relates to the actual lyrics is something special. 2 Chainz found a lane, and he didn't swerve. Yes, his bio is the every-rapper narrative of frenemies and felonies. His father died shortly before his album release. In spite of his trials, and within a genre where people take themselves very seriously, he makes music that becomes a means of escape for whoever's susceptible, regardless of their socioeconomic status, race or gender. Even when his lyrics sway toward violent imagery or use explicit language, they're so far-fetched or downright laughable that they can't (or shouldn't) be taken seriously. He rarely breaks character.

He has chosen to be catchy and upbeat rather than cool and dark. Complex published an interview with him in August. "My whole story is just about me having a second chance," said 2 Chainz, who's since turned 35. "My work ethic got me right here. People want to hear that s---. They're gonna hear about my daughter and all that real soon, but they wanna hear how you never give up. How you can be an inspiration to others." He's the latest generation's clown prince of hip-hop, whose revitalization this year made him an All-American pop star.