Accessibility links
Lorde Sounds Like Teen Spirit : Best Music Of 2013 The story of 2013's wild-haired teenage pop phenomenon has more than a few parallels with the 1991 emergence of grunge kingpins Nirvana, but recast for the millennial age. 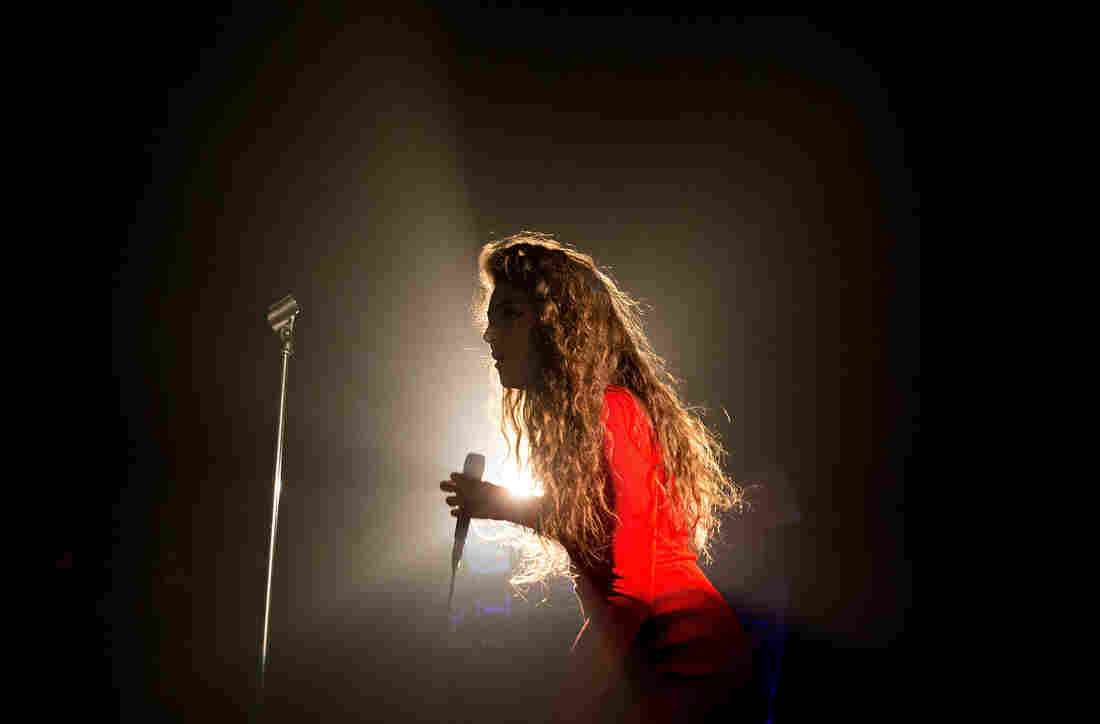 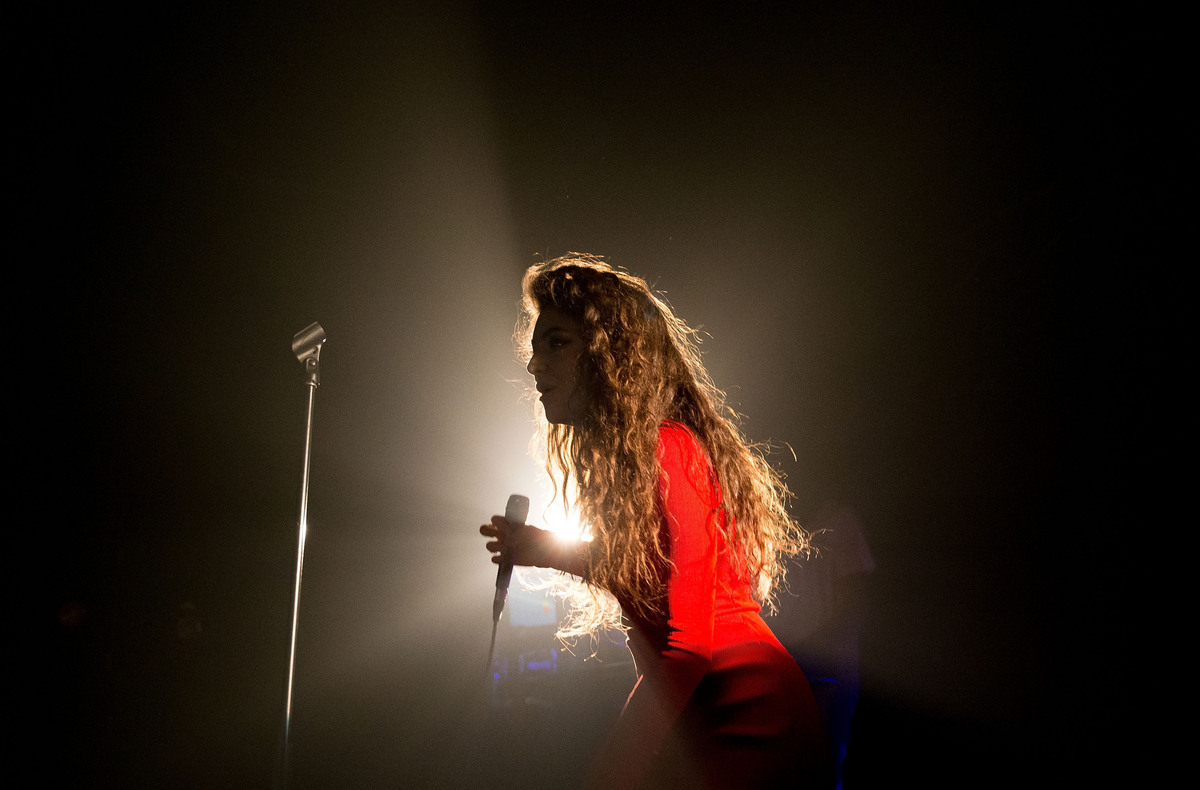 The name Lorde and the phrase "pop phenomenon" go together like black lipstick and pale skin. Last spring the high schooler born Ella Yelich-O'Connor was just another interesting voice on Soundcloud, emanating from New Zealand, of all places, with a sultry voice, intriguingly sleepy beats and lyrics that captured the exquisite ennui of a precocious teenager. Her single "Royals" just spent two months at the top of the singles charts and her debut album, Pure Heroine, is making lists as one of the most talked about, if not best, efforts of the year.

But it's not sales or even media attention that makes Yelich-O'Connor more than just another lucky ingénue with good hooks and a novel look. (In the brand parade of young female pop stars, Lorde rocks Monster High style amidst a shelf full of Bratz, Barbies and American Girls.) Lorde is a phenomenon because of perfect timing. She came along just when listeners were craving what "Royals" famously advocates: a different kind of buzz.

In 2013, the culture's longings and anxieties coalesced for the umpteenth time around youthful excess cooked within a stew of racial tension, class dissatisfaction and identity blur. The mood built all year, hitting a peak in late summer, when the former tween role model Miley Cyrus turned herself into an It Girl by doing what It Girls have always done: flaunting her budding vitality with a shimmy, a tongue-wag and a twerk. As self-aware as she was crass, Miley w-re-e-ecked us by continually identifying new hot buttons and pushing until they were sticky. Her antics helped sell many copies of her album Bangerz, but its genuine musical freshness made a minor impression next to her tricksterism.

Then, fast on her heels, Lorde turned the conversation. After a few months as the new find of early musical adopters, this droll chanteuse became notorious for suggesting that some kids might prefer to stand apart from pop's endless party. In October, "Royals" displaced Cyrus' power ballad "Wrecking Ball" (a pretty killer song, actually) at No 1. "Royals" has since thrived in its contradictory space as both an anti-luxury anthem decrying "gold teeth, Grey Goose, trippin' in the bathroom," and the ultimate expression of class privilege: a bourgeois protest against the common people's aspirational fantasies.

Lorde is bourgeois, there's no doubt. Her nonconformist stance is textbook bohemian. She's a precocious child of middle-class comfort and high education — a "poet's daughter," every feature article on her notes. As a marketable countercultural figure, she's part of a lineage that extends from Kerouac to Dylan to Patti Smith to Michael Stipe to Eddie Vedder, right down to the roots of her wild-child hair.

Musically, though, Lorde is very 21st century, because she doesn't recognize the difference between an underground and a mainstream. The uniformly excellent songs on her debut album, Pure Heroine, gently skew the mainstream sounds of hip-hop and electronic music, opening up a space around the beats for Lorde's voice and her words, which question the very seductions most music that sounds like hers embraces. She has a lot in common with Miley in the way her niche isn't precisely "urban" or "alternative" or "rock": This music doesn't reveal roots, it explores extensions.

As Lorde became ubiquitous –- anointed by Bowie, feuding with Miley's fellow Disney graduate Selena Gomez, dissing and later publicly pow-wowing with Taylor Swift — what she means to the Top 40 became clear. She's the Nirvana of now. If that statement seems outrageous, consider the parallels.

Like Nirvana in 1991, Lorde brought forth something that had been incubating for a long while on the indie scene. Nirvana broke in the wake of a decade of indie bands blending punk and more melodic rock. Lorde follows edgier artists like Grimes and Merrill Garbus of tUnE-yArDs, young female voices finding themselves within a forest of electronically generated sounds. Her birthplace, New Zealand, is even farther from pop's centers of power than was the Pacific Northwest; that's helped her image as a self-generated outsider, though in fact she's had a development deal with Universal Records since she was 13 and wrote Pure Heroine with an older collaborator, Joel Little, who played a role not unlike the one producer Butch Vig had in Nirvana's breakthrough. "She's a child of the cloud," wrote Jon Dolan in his Rolling Stone review. That's Lorde's true regional identity, and it produces a sound evocative of the cyberworld: pulsing ether instead of heavy Northwest rain.

Risky artists change the Top 40 game by the luck of what precedes and surrounds them. Nirvana succeeded where Husker Du and The Replacements imploded; Lorde has benefited from partial successes of tart ingénues like Robyn, Sky Ferreira and Lana Del Rey. Then there's what the "new" sound pushes aside. Nirvana famously displaced Michael Jackson at No. 1. Lorde's arrival in the midst of Mileymania felt to many of her fans like a similar intervention.

Finally, there's the hit itself: a no that blossoms into a yes. "Smells Like Teen Spirit" was an emerging generation's frustrated battle cry, and like "Royals," it decried the pop industry of which it became a part. Hitting hard, "Teen Spirit" revitalized the idea of what rock could be. Sneaking in, "Royals" suggests that pop can have deeper layers. Nirvana lobbed a Molotov into the charts. Lorde released a virus. Each weapon suited its time.

Subversive hits like these tap nerves that listeners otherwise have numbed. Gender and sexuality were Kurt Cobain's great topics: He wasn't what a man was supposed to be, in his semi-rural family, in rock, or in America in general, and so he wrote songs that ripped at the flesh of male and female identity. "A mosquito, my libido," he growled in "Smells Like Teen Spirit." Lorde's protests are less self-critical and at this point less radical, too. But she has the potential to make more complex statements, simply because she's becoming an artist now instead of 20 years ago. Today, both creators and fans are more able to see and — when they're brash enough — act on the connections across genres, tentatively integrating communities.

Her pale skin has proved a problem, however. Unlike in the early 1990s, when the myth of separate but equal realms allowed for rock fans who embraced Nirvana to disregard hip-hop if they chose, 21st-century pop is grounded in that African-American art form, and anyone who doesn't acknowledge that consigns themselves to only marginal relevance.

The cliché about millennials like Lorde is that they don't see race; in reality, they're negotiating the complexities of racial difference and appropriation every day, in the slang they use, the way they move their bodies, and most certainly, the music they make and love. Lorde has often talked about her love of hip-hop, but she also cultivates a distance from it. That choice can be read in myriad ways: as a result of her perspective as a non-American; as a critique of what Kanye West earlier this year dubbed the "new slavery" of mindless consumerism, often celebrated in mainstream rap and pop; or as a young upstart's insensitive dismissal of what people born without the comfort she enjoys see as valuable.

Because the chorus of "Royals" satirizes desires often expressed in songs by rappers and R&B crooners, Lorde has been called racist, or at very least, a clueless coddled kid. The song reignited a familiar conversation about hip-hop's relationship to glamour. Lorde, who's a ridiculously intelligent quote machine, further incited debate by declaring pop's star system unhealthy for girls, dangerous to stars themselves, and generally gross.

In 2013, pop often feels like a free-for-all of appropriation, insult, earnest idealism and incensed response, as kids negotiate contradictory identities that aren't natural but feel right. Kurt Cobain sang about his "little tribe," but while real life remains often tragically segregated, in 2013 the dream world of pop is one of mashups, remixes and blurred lines.

Lorde is one of these hyphenate beings. The cadence of her voice often recalls rap even when she's unsure of her relationship to it. A self-proclaimed feminist, she's also a girl having fun with fashion and the game of public image, like a musical version of the similarly gutsy Rookie magazine editor Tavi Gevinson. That's Lorde's world, too: the feminist blogosphere that is the next-generational flowering of the 1990s riot grrrl and Third Wave movements, more international now, and aware of difference, if not always diverse.

The young women who made up 2013's version of insurgent girlhood — as politically powerful as Nobel-worthy education activist Malala Yousafzai or as Hollywood-constructed as Jennifer Lawrence's embodiment of The Hunger Games heroine, Katniss Everdeen — have a self-possessed poise that feels game-changing. Lorde is bringing some of their seriousness into pop as it begins to show signs of binge fatigue. She has some company: Janelle Monae; Solange; over in country, Kacey Musgraves. A little time will tell if her success opens up a channel for others.

But who, considering pop's current biases, will be able to follow in Lorde's wake? 2013 was a very good year for white artists openly appropriating African-American style, sounds and even literal voices. There was the blue-eyed soul of Robin Thicke and Justin Timberlake; dance dominance from Daft Punk and Avicii, the hick-hop of Florida Georgia Line; the R&B sweetness of Ariana Grande; the backpacker rap of Macklemore & Ryan Lewis. There was Eminem, again. It's difficult to not see this year as another round in the ongoing cycle of appropriation and marginalization that grew out of minstrelsy. That's not to say Lorde and every other artist named in this paragraph doesn't respect and even love African-American culture. But love doesn't always bestow power.

Both "Royals" and the protests it's inspired are about that central subject of power. Not just the chance to live the luxe life, or the luxury of not even wanting it; but also the right to speak, to assume a way of being, even to occupy certain spaces. The song's not called "Royals" by accident; like Ella Yelich-O'Connor's stage name, the title reminds us that first-class living is a concept grounded in the blood rights.

The 21st century is a most confusing time when it comes to class. The virtual world has so much real estate, and we all can feel privileged roaming through it. But where our feet walk and our tired bodies rest, rents are increasing and wages are dropping. The government was shut down in a fight over health benefits. The deaths of Trayvon Martin and Renisha McBride raise bitter debate over who can walk where, and what self-defense means. Whole regions of the country, like Northern California, are being transformed into private compounds for the super-rich. "We will never be royals," Lorde sings, a tinge of melancholy in her voice, and it's easy to imagine people hearing their own fate in her lament. The question worth asking echoes from the end of the chorus: do we still want to live that fantasy?