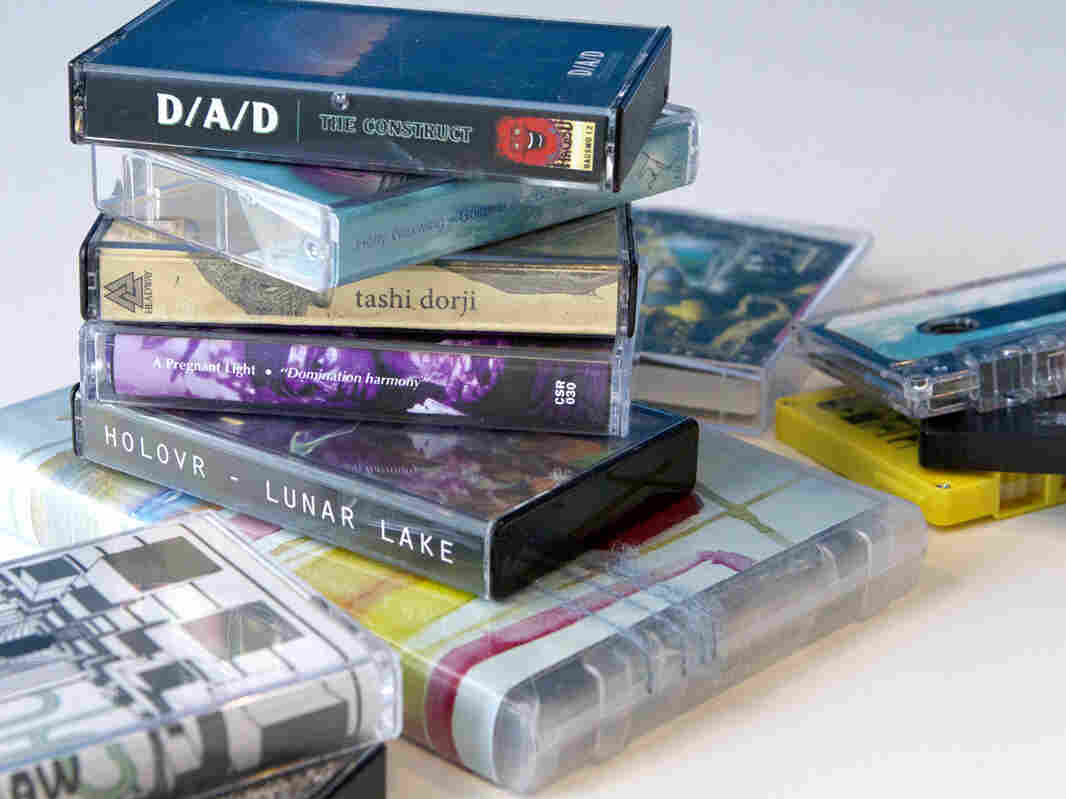 Pitch-shifted soul and a pop song's game of chutes and ladders were among 2013's awesome tapes. Meredith Rizzo/NPR hide caption 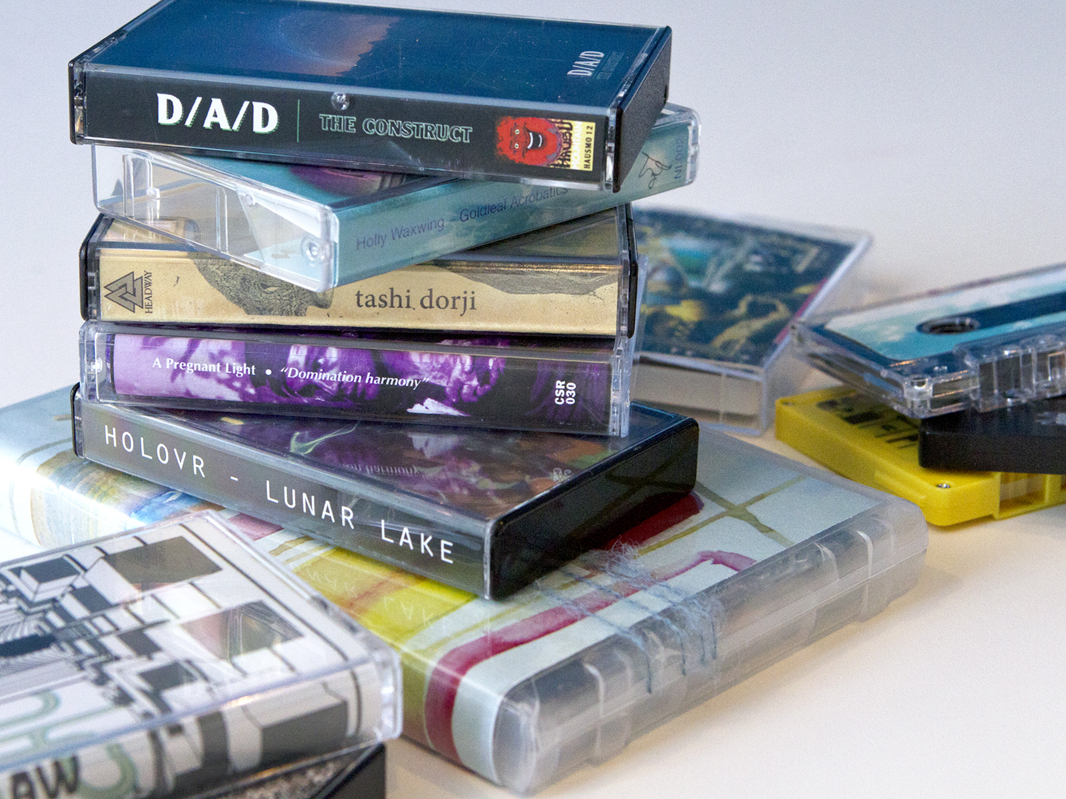 Pitch-shifted soul and a pop song's game of chutes and ladders were among 2013's awesome tapes.

Cassettes have been a medium of choice since I bought my first car outfitted with a tape deck in college (RIP Maude). They force a full listening experience, their dimensions inspire designers in ways that a square doesn't and, for the most part, are cheap. Yes, you can find a $12 cassette, and unless it's a beautiful monstrosity encased in broken glass, it's a rip-off. But in a year when budgetary priorities fell more in the direction of a six-month engagement and wedding, cassettes were the way I connected with music.

Oh, I tried streaming services and received more digital promos than I can possibly ingest. But that tangible thing, that ability to browse stacks of organized and yet-to-be-filed music and maybe rediscover an old favorite by accident — that only exists in iTunes as timestamps, and on Spotify, who knows how to stumble upon anything. Bandcamp comes the closest to filling that void, with options to buy physical media and personal libraries that are just as messy as your apartment's. But the more I tried to cram MP3s and streams into my everyday listening patterns, the more I realized I will never connect to digital music — the "freedom" of not owning anything just a baffling concept to archivist-at-heart like me.

Lately, the cassette format isn't just limited to the bedroom weirdos and black metal deviants, though they're still repping the spools hard. More indie-pop, punk and beat-based producers are in the game, with a few interlopers just taking advantage of the upswing (some always do — see also: vinyl). Niche sites are popping up, too, dedicated to the medium, like Tabs Out, C86'd and and Tape Famous. But tapes also allow for projects like Kill Rock Stars' eye-opening '90s compilation reissues or Auris Apothecary's not-so-secret Nintendo soundtrack series to have fun with the format and incite our inner nerdlings.

So as I still sort out what to make of digital music in an overloaded age, these are the analog pieces of plastic and magnetic tape that made 2013 awesome for me. Want more? Head on over to my blog for the cassettes I hated to cut.

Damian Master has riffs for days. Nearly all of his bands (A Pregnant Light, This Station of Life, Aksumite, Bound Bible, Bodystocking, All Wave, others we probably don't know about) released music this year. A Pregnant Light is Master's own project, with its initial roots in black metal, but has since become a common ground for his wide spectrum of taste. And that can be a tricky thing, especially given the current state of let's-do-every-genre metal. But Domination Harmony asserts Master's attention to how a spacious chord can launch into swirl of cymbals, or how a persistent post-punk riff can dissolve into the background and return like figure eights on repeat. Master continues to keep me guessing, which is why I always come back.

Domination Harmony is sold out from Colloquial Sound Recordings, but is available digitally on Bandcamp.

Taxidermy of Unicorns finds the loose, connecting thread in four of experimental music's most exciting female musicians. It's a thoughtfully conceived four-way split release that understands music as a "communal expression," as curator Lynn Fister notes in an introduction. And, yet, the women here could not come from more different states of composition — there's the folkloric and dreamlike music of New Zealand's Birds of Passage, the pulsing and tectonic drones of Je Suis Petit Chevalier, the highly textured and nearly-orchestral synth-work of Motion Sickness of Time Travel, and finally, Lynn Fister's own project, Aloonaluna, which seems to make pop music for robots. Packaged with a zine featuring the artwork and poetry of the artists involved, Taxidermy of Unicorns is a testament to some of the most outward-moving experimental music made not just by women, but by anyone right now.

Taxidermy of Unicorns is woefully out of print from Watery Starve, but you can stream most of it on Bandcamp and Soundcloud via the artist links provided.

Man Feelings is your heartbeat after a six-pack of the secret Jolt Cola formula the government doesn't want you to know about. Man Feelings is the actual the soundtrack to the hyper-violent, psychedelic cartoon Superjail! Man Feelings is a glitched virtual reality machine at the mall that takes you on a moon safari only to discover you've been Willy Wonka'd to an actual safari. You have no space helmet.

2013 was a knockout year for what I tend to call '80s-style Blade Runner synth jamz: instrumental cyberpunk high on drama and fleet with sequenced fancy. Bandcamp-based labels like Aphasia, Rosso Corsa, Future City, Revolving Door and Telefuture led the way on the digital front, but very few followed up on the music's natural format: the cassette. D/A/D's The Construct is the stuff workout montages are made of, sure, but a tone-perfect memory of that era and those movies. Where others might pound the sine wave for maximum fist-pumpage, D/A/D adds nuance to these compositions, with flourishes that I catch on third and fourth listens. Besides, if she ever heard it, Robyn might eye the one vocal collaboration featuring USA Gold and Sharaya Mikael, "Love Will Make You Stay," with extreme jealousy.

The Construct is available from Hausu Mountain. Follow D/A/D on Bandcamp.

Let's just go ahead and call 2013 the year of our crustaceous hero, Giant Claw. Keith Rankin (a.k.a. Giant Claw, also one-half the stellar Orange Milk label) released four tapes on four different labels, not one following the same vibe or intent. If I was being honest with myself, all four would have made this list. There's the Lynch-ian noir of Music for Film, the goofy side-scroller video game music of Tear in Static and the spastic sci-fi free-fusion of Max Mutant. But the tape that killed me every time is Impossible Chew, a playful and rhythmic romp of synths and sequencers that never lets up on its ecstatic rainbow of happiness.

Goldbeat Acrobatics is sold out from Noumenal Loom, but is available on Bandcamp. Follow Holly Waxwing on Bandcamp.

Opal Tapes is what we talked about when we talked about noisy techno and house in 2013. What gurgled to the surface in 2012 got overloaded this year with every noise kid that downloaded Ableton Live trying his hand at obliterated beats. Granted, some of it was good, but Opal Tapes gathered the best with releases by Karen Gwyer, COIN and my favorite, the debut by London's HOLOVR. Lunar Lake relies on ancient alien textures to drive its corroded techno rather than an overdriven thump, but never layers more than three or four ideas at a time. It surrenders to serenity by subverting the beat.

Lunar Lake is sold out from Opal Tapes, but available digitally on Bandcamp.

Pipes might be a single 14-minute track tape, but in it contains the frightening multitudes of Katie Gately's still-developing voice. And that's just what it is: Gately's voice, torn asunder and reconfigured into something like an ecstatic pop song that can and does go every which way. It'd be a disservice to even describe the insane chutes and ladders game that "Pipes" plays.

When Priests played Fort Reno — the annual, locals-only outdoor festival series here in Washington, D.C. — this past summer, I turned gobsmacked to fellow NPR Music producer Daoud Tyler-Ameen and said, "Holy s---, they got really good on tour." On the simply and numerically correct Tape Two, the wild surf-punk band's dangerous energy finally found its focus. It's got the dead-eye minimalism of post-punk icons Pylon on a Bikini Kill bender — not to mention Katie Alice Greer's chest-knotting voice howling about everything from political writer Lillian Hellman to Stockholm Syndrome.

Tape Two is currently available from Dischord Records, with a third pressing due out soon on Sister Polygon. Follow Priests on Bandcamp.

Going down the research rabbit hole of American Primitive recordings released in 2013, I discovered Tashi Dorji. To be fair, calling what this Asheville, N.C.-based, Bhutanese-born guitarist does "American Primitive" isn't quite right. Dorji works with prepared acoustic guitar (for instance, pieces of paper jammed between strings) and contact mics to illuminate the not-so-guitar-like sounds. But on this self-titled tape, it's all one-take improvisations and no electronics, with an extremely close recording that captures every scrape, pick and crash on the fretboard. The comparisons to non-idiomatic guitarist Derek Bailey are not unfounded, but Dorji's explorations are spirited and don't seem guided by American blues, but perhaps the Bhutanese melodies of his formative years.