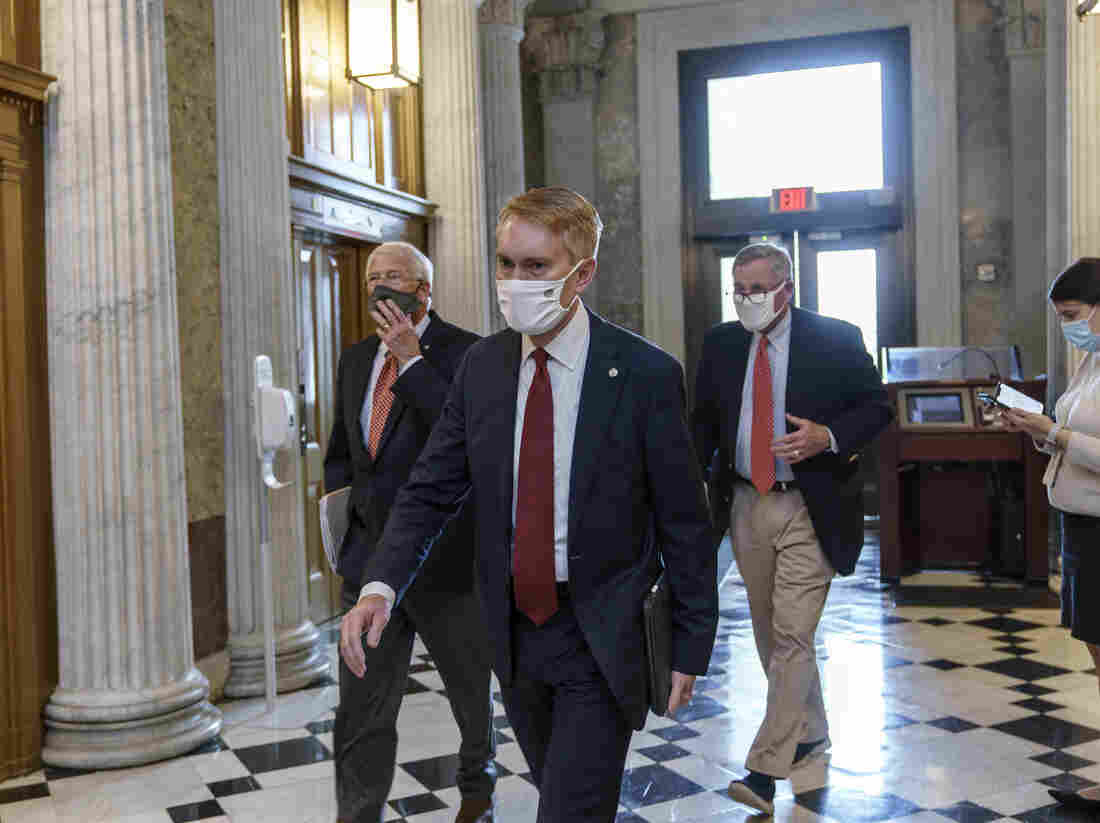 Sen. James Lankford, R-Okla., center, is among the Republican lawmakers supporting a push for President-elect Joe Biden to receive new intelligence briefings as part of his transition to the White House. J. Scott Applewhite/AP hide caption 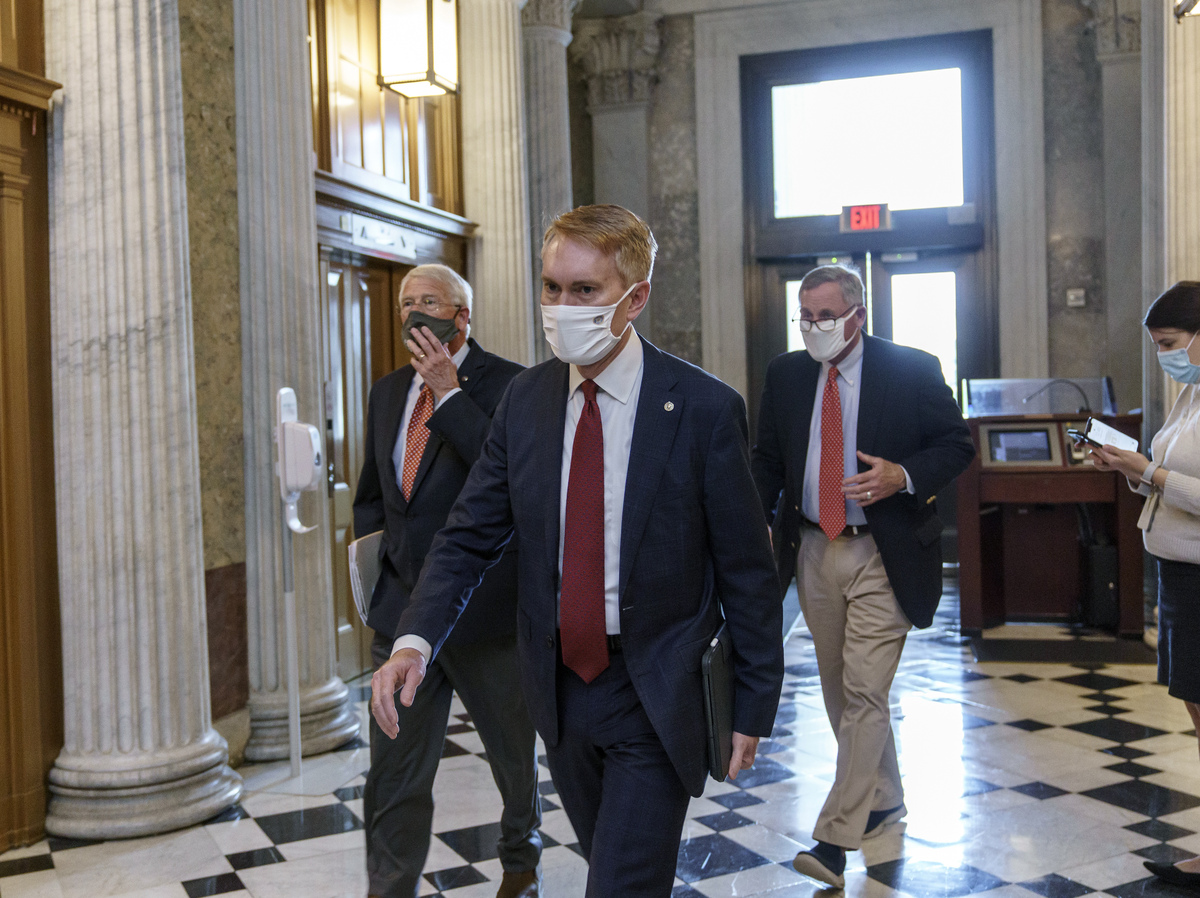 Sen. James Lankford, R-Okla., center, is among the Republican lawmakers supporting a push for President-elect Joe Biden to receive new intelligence briefings as part of his transition to the White House.

Although many Senate Republicans are still resisting recognition of President-elect Joe Biden's election win, they are signaling support for the former vice president to receive intelligence briefings as part of the transition process.

Sen. James Lankford, R-Okla., who had said he would look into the matter as part of an oversight role, said he'll investigate further if the General Services Administration doesn't soon start the new intelligence briefings for Biden as part of the transition process.

The GSA has yet to "ascertain" the winner of the presidential election to trigger additional federal aid and office space.

However, a senior administration official clarified on Friday that ascertainment doesn't have to occur for classified briefings to take place. GSA does not control access to classified information, the official said.

Still, the Office of the Director of National Intelligence, which oversees the president's security briefings, said in a statement earlier this week that it "would not have contact with any transition team until notified by the GSA."

Lankford noted during the disputed election in 2000, both presidential candidates continued to received briefings. And that should be the case now for Biden and Trump, he said.

"We should be in the same posture that we were in throughout the whole campaign, with both of them receiving briefings," Lankford told reporters Thursday at the Capitol.

Lankford had also noted on Thursday that then-President Bill Clinton had cooperated during the 2000 election dispute to allow the intelligence briefings, and it was possible President Trump would not allow it.

"That is that is his decision on that, on what actually happens and I'll actually walk through the process and get that from GSA in the days ahead," Lankford said Thursday.

Biden received intelligence briefings as a candidate, but they were limited and occasional, NPR has reported. Lankford and others spoke about Biden receiving what he did as a candidate but mostly didn't specify whether they thought he should also receive the expanded briefing a president-elect generally would.

The remarks are another reminder of the self-imposed bind for Senate Republicans as they prop up President Trump's pursuit of false claims of widespread voter fraud while also acknowledging a transition for a new president is underway.

Lankford has said that Biden is likely the winner of the presidential contest but said he wants to back Trump's effort to exhaust his legal challenges.

But Lankford also noted a key concern is tied to the 9/11 Commission, which said a lack of cooperation more broadly during the 2000 transition may have hurt preparations that could have thwarted the terrorist attack.

"I think the information needs to be communicated in some way," said Sen. John Cornyn, R-Texas, a member of the Senate Intelligence Committee. "I think he should get the information. ... I just think it's part of the transition. And if in fact he does win in the end, I think they need to be able to hit the ground running."

"I do think they're gonna have to work that out in very short order," Sen. Mike Rounds, R-S.D., told Capitol Hill pool reporters.

Sen. Josh Hawley, R-Mo., agreed Biden should be getting briefings, too.

"At this point, at least, I think he should absolutely be getting intelligence briefings. The briefings he's been getting as a candidate should continue," Hawley told reporters.

Only four Republican senators so far — Sens. Mitt Romney of Utah, Lisa Murkowski of Alaska, Susan Collins of Maine and Ben Sasse of Nebraska — have congratulated the president-elect.

Members such as Collins took the calls to back Biden's transition a step further, saying he should also be receiving additional GSA support. She said it wouldn't preclude Trump from pursuing his legal challenges.

"President-elect Biden should be receiving intelligence briefings right now. That is really important. It's probably the most important part of the transition," Collins told reporters.

"In addition, like any apparent winner, he should have access to office space, federal employees, materials, supplies, whatever, but the standard assistance that the apparent winner receives," Collins said, adding, "because we want the president-elect — assuming he prevails — to be ready on Day 1."

Before the Trump administration official clarified the GSA remarks to NPR on Friday, Lankford had said the GSA could begin to trigger such briefings and other assistance as early as Friday. But he was doubtful the agency would move forward in such short order.

Instead, Lankford said he was planning to reach out to the agency Friday as part of his oversight role. Then, he'll want to look at what the timeline will be to begin the intelligence briefings, again with lessons learned of the Sept. 11, 2001, attacks in mind.

"I want to know what's their process and how they're going to try to make that decision," Lankford said. "So for me, this was just an issue of saying let's learn the lesson of 2000. And let's make sure that both sides are prepared."

Biden said earlier this week that while the briefings would be helpful, they are not crucial, and that his transition plans will not be affected.