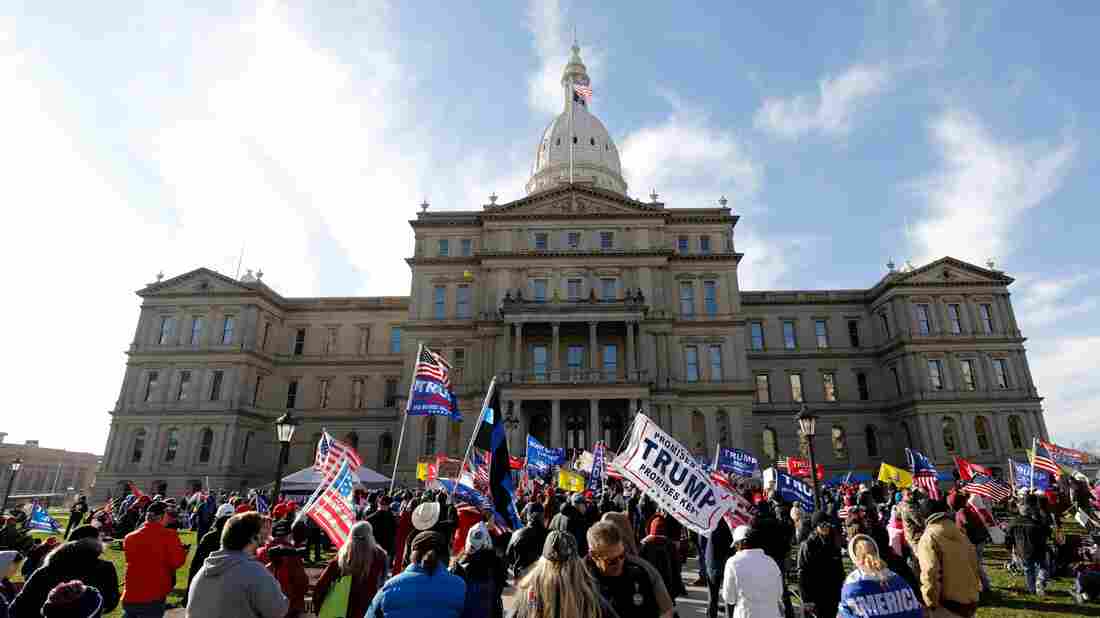 Protesters gather in support of President Trump on Nov. 14 at the Michigan Capitol in Lansing. Trump and his allies have baselessly alleged widespread voter fraud was to blame for the president's election loss. Jeff Kowalsky/AFP via Getty Images hide caption 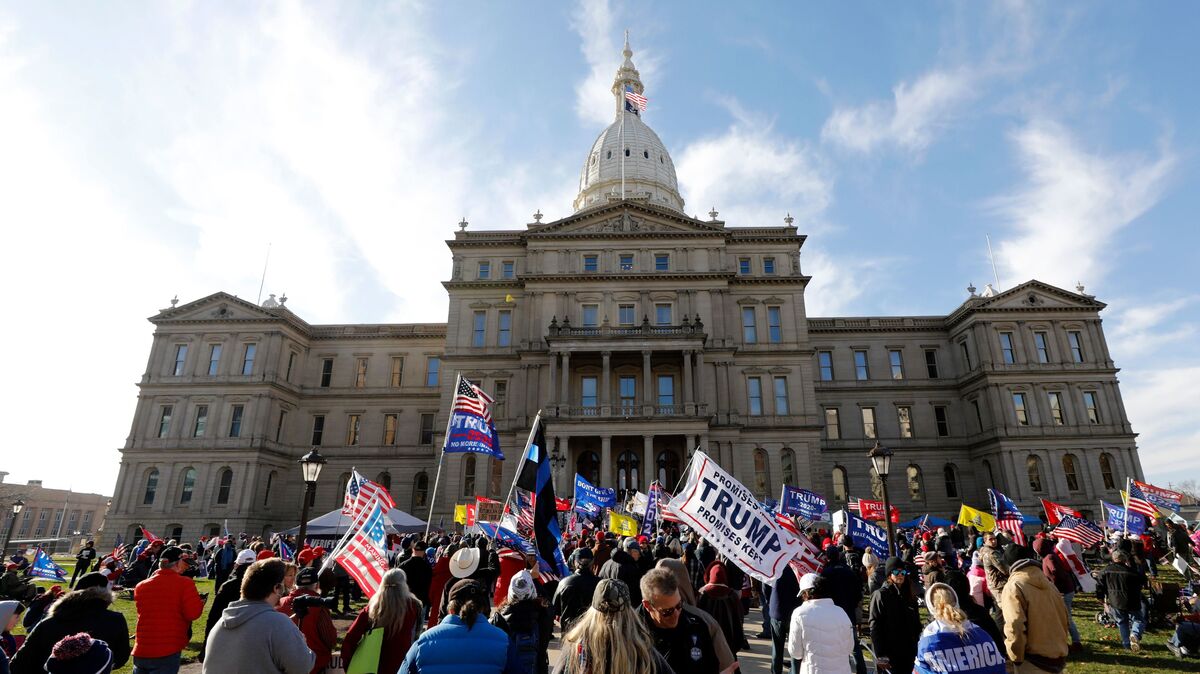 Protesters gather in support of President Trump on Nov. 14 at the Michigan Capitol in Lansing. Trump and his allies have baselessly alleged widespread voter fraud was to blame for the president's election loss.

The Michigan Board of State Canvassers voted Monday to certify the state's election results after weeks of attempts by President Trump, the outgoing Republican nominee, to overturn his opponent's victory. Three members voted in favor of certification, and one abstained.

Two Republican voters on the board, Aaron Van Langevelde and Norm Shinkle, were of particular interest to politics watchers across the nation. Van Langevelde ultimately voted to certify the results, arguing that he saw "no language in the law" granting the board the power to audit the election results.

Shinkle, who abstained, told The New York Times last week he hadn't made up his mind on how he would vote. During the board meeting, however, he complained about what he said was a lack of Republican representation among poll workers and it became apparent that he would not vote to certify.

The road to certification this election cycle has been an unusually complicated affair in the closely watched swing state. Trump had banked on winning Michigan to secure the White House for a second term. He narrowly captured the state in 2016 over Hillary Clinton.

But President-elect Joe Biden was able to flip the Great Lakes State back for Democrats this year, with the former vice president and his running mate, Kamala Harris, campaigning heavily there.

As it became increasingly clear that his path to victory had narrowed in Michigan, Trump employed unprecedented tactics to try and delay the certification process or replace Biden's electors with ones who would vote for him despite the election's outcome.

Last week, the president invited several Republican Michigan state lawmakers to the White House for a discussion, which press secretary Kayleigh McEnany said was "not an advocacy meeting" for Trump's campaign to overthrow the election.

After that meeting, two high-ranking state officials released a joint statement affirming they would "follow the law and follow the normal process regarding Michigan's electors."

The main basis of Trump's legal complaints to overturn the election results hinges on what he and his allies have baselessly alleged was widespread voter fraud. Those lawsuits have been largely thrown out in court or withdrawn by the Trump campaign.

Republicans pushing for a certification delay had argued that votes particularly in Wayne County — the state's largest county, where the majority-African American and heavily Democratic city of Detroit is located — should be audited.

Trump has historically held low favorability among Black voters. The president had also spent months criticizing the process of absentee voting, which a historic number of voters used this year as a result of the ongoing coronavirus pandemic, and urged his supporters to vote in person on Election Day. Trump later complained about the number of absentee ballots that had gone in Biden's favor.

Michigan lawmakers Shirkey and Chatfield maintained that any investigations of fraud should be thoroughly investigated but said as of Friday they "have not yet been made aware of any information that would change the outcome of the election in Michigan."

Biden is ahead in the state by more than 155,000 votes, according to The Associated Press count.

In a statement after Monday's vote, the Trump campaign downplayed the importance of Michigan's certification and vowed to continue to fight to overturn results.

"Certification by state officials is simply a procedural step. We are going to continue combatting election fraud around the country as we fight to count all the legal votes. Americans must be assured that the final results are fair and legitimate," Trump senior legal adviser Jenna Ellis said in a statement, repeating the campaign's erroneous claim of widespread voter fraud.

Despite the campaign's vow, the Trump administration announced Monday evening it will begin the transition process to Biden's presidency.