Accessibility links
Transcript: Kamala Harris On U.S. Capitol Attack And Stimulus : Biden Transition Updates The vice president-elect joins NPR to discuss the attack on the U.S. Capitol, the looming impeachment trial in the Senate and the massive rescue plan the president-elect just unveiled. 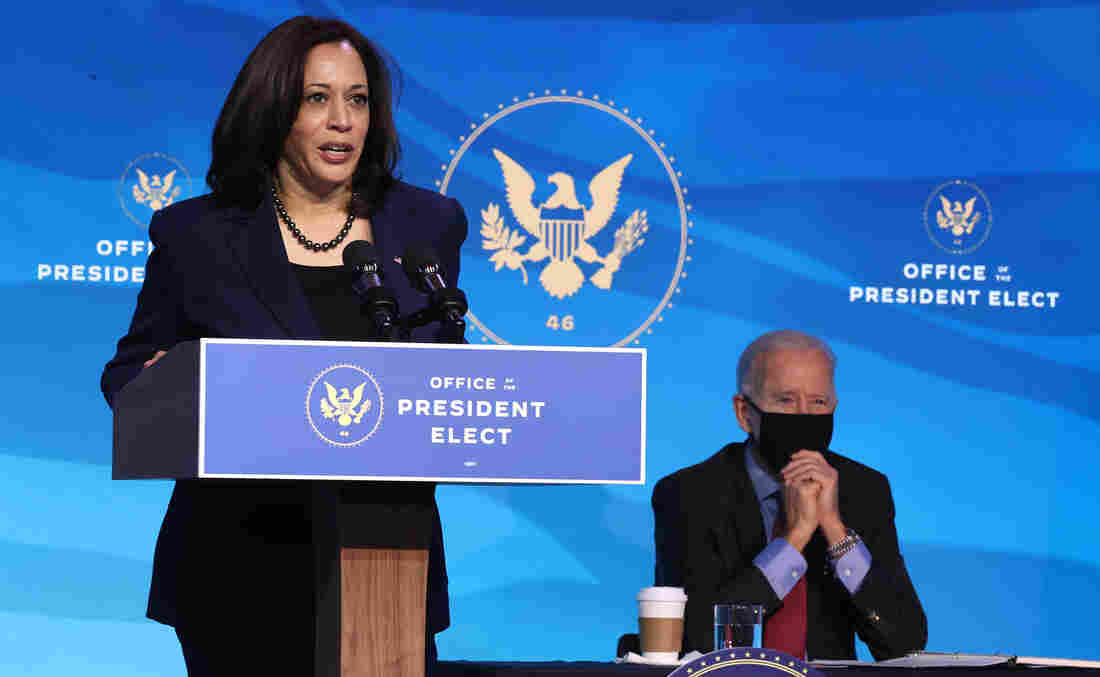 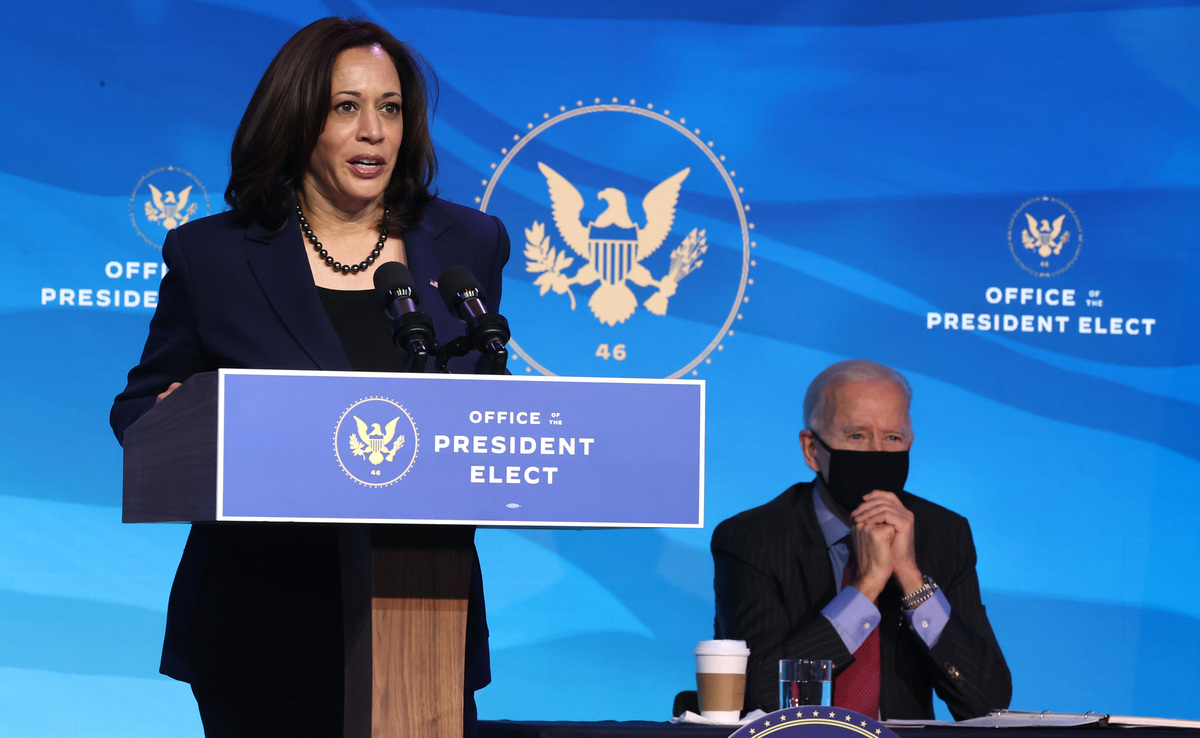 But when Harris takes the oath, the mall will very likely be nearly empty.

A surging pandemic had already led President-elect Joe Biden and Harris to urge supporters to watch the inauguration from home. Now, after a deadly siege of the U.S. Capitol by supporters of President Trump, thousands of National Guard members have been deployed to protect the transfer of power against more violence.

The brazen attempt to block Congress from certifying Biden and Harris' November election victory was unprecedented. But for Harris, the undercurrents of hate and racism it represented were not.

"Sadly, it is not the first time I have seen a demonstration like what you are describing in the history of our country," she added. "And and it is — it is a reminder that we still have a lot of work to do."

Like Biden, Harris is determined to take the oath of office outside, on the West Front of the U.S. Capitol, despite security concerns that have led to the garrison of soldiers inside the building for the first time since the Civil War. "I think we cannot yield to those who would try and make us afraid of who we are," she said.

And, like Biden, Harris is equally determined to move forward with an ambitious legislative agenda despite the fact that the early weeks of their administration will likely also see a second Senate impeachment trial of Trump.

"We know how to multitask there," Harris said. "We have to multitask, which means, as with anyone, we have a lot of priorities and we need to see them through."

Harris spoke to NPR on the day Biden unveiled a $1.9 trillion rescue package that would expand unemployment benefits, issue another round of direct stimulus payments, spend billions on coronavirus vaccination and testing efforts, and raise the federal minimum wage to $15, among many other provisions.

The full interview, including Harris' thoughts on last week's attack and the measure she's calling the Biden administration's "highest priority," is below.

I want to start with last week with the Capitol attack. You were in Washington, D.C. What was that day like from your vantage point?

It was horrific. It was a day that wherein we witnessed an assault on America's democracy, a day when we witnessed the terror that a few can wreak on so many. And it was probably, you know, it will be in history recorded as one of the worst days in terms of an attack on the integrity of our democracy.

You are, of course, about to become the first woman of color to serve as vice president, and I'm wondering what went through your mind seeing racist symbols, Confederate flags, parading through the Senate hallways where you've spent the last four years?

Looking forward, we currently have troops quartered at the Capitol for the first time since the Civil War, there are more frightening details about last week and future threats coming out every day. But President-elect Biden is insisting that the inauguration go forward as planned on the West Front. Why is it so important to you to stick with the planned ceremony and take the oath outside?

I think that we cannot yield to those who would try and make us afraid of who we are. We are, for all of our faults and imperfections, we are a nation that was founded on very important principles and guided by extremely important ideals. And we cannot abandon that. We are a work in progress, but we cannot abandon the appreciation that we should all have for the traditions that are symbolic of our commitment to our democracy, which includes a peaceful transfer of power, which includes what we do to bring in one administration after another in a way that is about upholding basic standards, and in particular, those standards as outlined in the Constitution.

Shifting gears to this proposal that the president-elect laid out, this is a massive bill. It's just short of $2 trillion. Ticking through some of the details — $20 billion for vaccinations, $50 billion for expanded testing, $130 billion for schools to reopen safely. If this is passed and signed into law, how quickly can Americans expect to see life to return to normal?

Let me be very clear that the president-elect and I know this is not going to be easy, but we are putting everything we've got into this, and to deal with it as soon as possible, which is why we're prepared right now to, on day one, push through and get this package, so that it hits the ground and hits the streets and we get relief to the American people.

And that's why we've called it the American Rescue Plan, because right now we see a lot of folks need to be rescued.

That's why we have the direct payment. It's gonna supplement the $600 that came in December with another $1,400 for $2,000 [total]. That's why we are expanding SNAP benefits — we used to call it food stamps. It's about getting support to hungry people and hungry families. And that's why we are saying that we're going to have community vaccination sites, because we need to support local governments and local leaders, mayors and governors, in terms of what they need to do to vaccinate as many people as quickly as possible.

We can't tell you that it's all going to be over on a certain date. But I can tell you this, on January 20th, we're hitting the ground running.

How quickly can this get passed? Democrats have the narrowest of narrow majorities in both chambers.

And the reality of it is that this pandemic, we all know, does not see political lines. It does not ... care about who you voted for in the last election. In that way, it is an equal opportunity offender. And in red states and blue states throughout the country, we are seeing profound damage in terms of the loss of life, the loss of income, the loss of just, normalcy.

And we intend to work across party lines to do what is necessary to get this passed. ... The proposal that we are making is very reasonable. It's about doing things like saying, "Hey, we all need and want our kids to get back to school." Those kids could care less who their parents voted for. We are saying, "Let's get assistance to local leaders and local governments to get these vaccinations going," because why? Vaccines once administered in the arm of the people who need it, it will save life. And we hope and we expect and we will work at the kind of compromise and collaboration that is necessary to get this pushed through, because it's just the right thing to do.

It's your top priority. But there is going to be so much else going on, including now a Senate impeachment trial. So you have not only this bill, you have to confirm the Cabinet through the Senate. There is an impeachment trial. How does that affect everything you're trying to do beyond legislation and confirmations? Just the simple fact that so much of the Biden-Harris campaign was about turning the page on Trump and now he's going to be on trial on the first month of your administration.

We know how to multitask [laughs]. There's a reason that word exists in the English language. That's what's going to be required. We have to multitask, which means, as with anyone, we have a lot of priorities and we need to see them through.

Biden's Plan To Release More Vaccine Is A Gamble. Is It Worth The Risk?

I think a lot of people have a lot of questions about the vaccines right now. This proposal has billions of dollars to fund vaccine distribution, but it's not just funding. There are distribution problems, information sharing problems. There are trust problems, supply problems. What can the federal government do immediately in the coming weeks to start to fix these?

Well, part of it is pass our plan because we are, for example, putting $50 billion into increased testing and tracing, as you mentioned earlier. We need to increase the supply of PPE. And so that is a big part of what we're doing and including using the Defense Production Act, knowing that that's one of the great tools in the toolbelt of a president in times of crisis, a national crisis. And so these are the things that we can do immediately. And I will tell you, the president-elect [and] I have spent a lot of time on the phone and talk with mayors and governors to make sure that we get — and bipartisan, by the way, Republicans and Democrats, mayors and governors, to make sure that we get them relief as quickly as possible so that it gets to the people of their cities and states.

And what are you specifically going to be focusing on in all of this? Of course, when Biden was vice president, he took the lead on that first stimulus package. This is a major stimulus package coming through. Are you going to be a point person in getting it passed or in any of these areas once it starts going to effect, if he does sign it into law?

Let me tell you something, on every decision that we have made as an incoming administration, we're in the room together, Joe and I, the president-elect and I. And on every, you know, I can't even tell you how many meetings we've been in together that range from this to many other topics that are priorities for us. And so all of the priorities are going to be a priority for me and for the president-elect, obviously. And we're full partners in this process.

There's a lot of incredibly serious things going on right now. There's a pandemic. There is this attack on the U.S. Capitol.

There will be a lot of thoughts going through my mind at that moment.

I will be thinking about my mother, who is looking down from heaven. I will be thinking about all of the people who are counting on us to lead and are counting on us to see them and to address their needs and the things that keep them up at night. And I'll be thinking about the fact that we have to hit the ground running immediately to support the people of our country, to support the children of our country, and to help get us out of the crises that we're facing, but also to, you know, let's get on and move forward and do the things that will allow us to grow and innovate and prosper.