Accessibility links
Secretary Of State Nominee Blinken Promises A Reengaged America Abroad : Biden Transition Updates "Humility and confidence should be the flip sides of America's leadership coin," Antony Blinken testified at his Senate confirmation hearing on Tuesday, where he vowed to work for the "greater good." 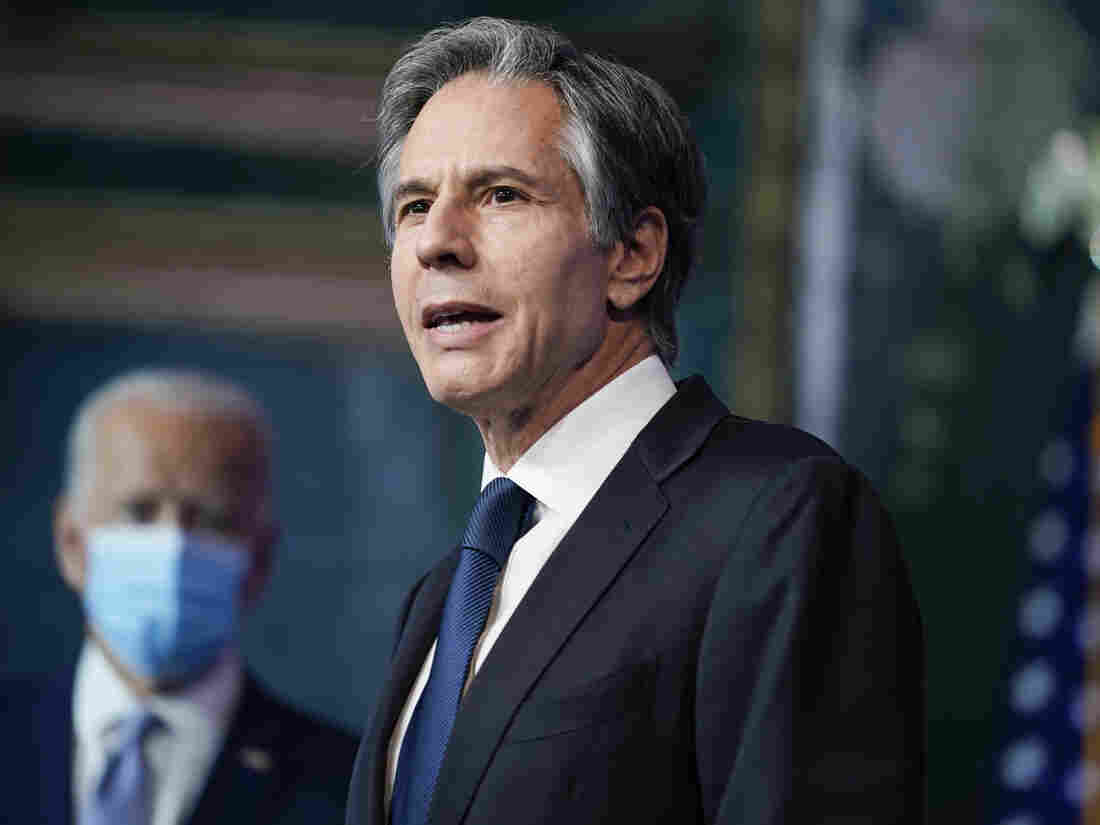 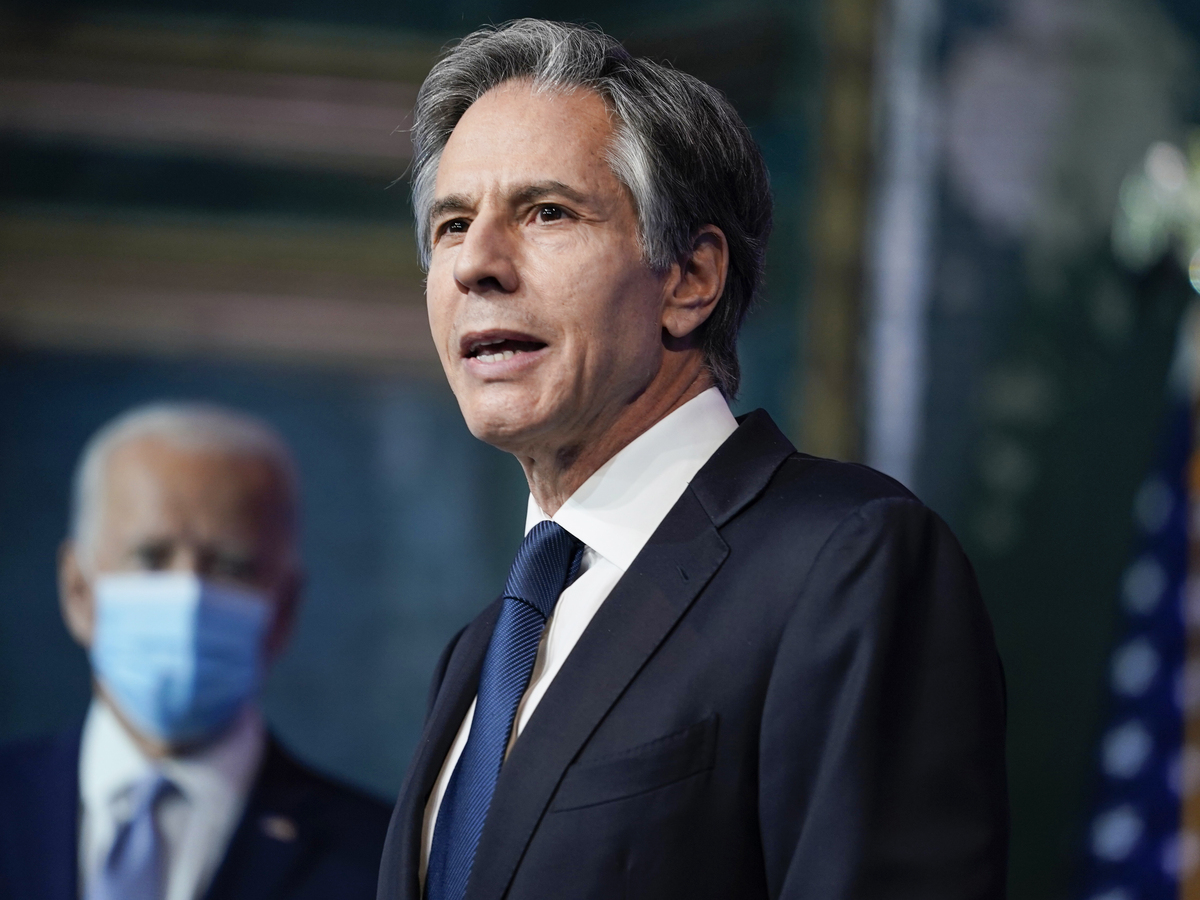 President-elect Joe Biden listens as his secretary of state nominee, Antony Blinken, speaks in Wilmington, Del., in November. Blinken told senators at his confirmation hearing Tuesday, "Humility and confidence should be the flip sides of America's leadership coin."

Antony Blinken, President-elect Joe Biden's nominee for secretary of state, vowed to restore American leadership on the world stage and work for the "greater good" during his Senate confirmation hearing Tuesday.

"Humility and confidence should be the flip sides of America's leadership coin," he told the Senate Foreign Relations Committee. "Humility because we have a great deal of work to do at home to enhance our standing abroad. ... But we'll also act with confidence that America at its best still has a greater ability than any country on earth to mobilize others for the greater good."

Senators questioned Blinken on how he would deal with Iran and China and how the incoming administration would rebuild frayed alliances.

"So I think you will see in a Biden administration that kind of engagement, that kind of leadership," he said.

Blinken said it was important to approach China — which he said "poses the most significant challenge of any nation state to the United States" — from a position of strength.

He said President Trump was right in taking "a tougher approach to China," though he disagreed with the outgoing president's approach. "But the basic principle was the right one."

Blinken has the resume of a diplomat. A Harvard University and Columbia Law School graduate who went to high school in Paris and speaks French, he was deputy secretary of state during the Obama administration. He was national security adviser to Biden when he was vice president and was the Democratic staff director on the Senate Foreign Relations Committee when Biden was its chairman. During Bill Clinton's presidency, he served on the National Security Council.

Biden To Nominate Antony Blinken For Secretary Of State

Sen. Chris Murphy, D-Conn., said Blinken's work to help restore America's credibility and rebuild alliances will be harder in the wake of the Capitol Hill insurrection.

"The mountain that he was going to have to climb to restore America's credibility was a 14,000-footer. It just became a 15,000-footer," Murphy told the Atlantic Council on Friday. Murphy said he's been reaching out to Republicans on Blinken's behalf to pave the way for quick confirmation.

On its first day in office, the Biden administration plans to rejoin the Paris climate accord, restore America's leading role in the World Health Organization and reverse Trump's executive order banning travel from some predominantly Muslim countries.

Aaron David Miller of the Carnegie Endowment for International Peace calls these issues "low-hanging fruit" compared with other challenges Blinken will face. Strained relationships with key allies and rising threats from Iran, North Korea, Russia and China were among the issues senators pressed him on during Tuesday's confirmation hearing.

"You know, looking out at this world, I divide it into migraine headaches on one hand and root canals on the other," Miller told NPR, citing challenges including the coronavirus pandemic, threats from Iran, and North Korea's expanding nuclear and missile arsenal. "It's a world where American power and influence is now challenged routinely by China and Russia, by smaller powers like Iran and North Korea, and where the notion that we are the indispensable power has kind of gone the way of the dodo."

It doesn't mean the U.S. can't lead, but it's going to be a lot harder, said Miller, who has advised six secretaries of state.

It's especially true when it comes to China, said Michael Green, a former George W. Bush administration official now with the Center for Strategic and International Studies. The Trump administration is leaving some initiatives that the Biden administration will probably continue, he said. But it is also leaving problems.

"The withdrawal from the Trans-Pacific Partnership means that the United States is now involved in none of the major economic negotiations in Asia," he said. "Trump and his leadership skipped most of the diplomacy in Southeast Asia, and that's where China is starting to expand its influence. ... And Trump put a lot of tariffs and pressure on U.S. allies that really rattled them."

Biden, he said, will have to restore confidence among allies and get the U.S. back in the diplomatic game.

The president-elect is bringing in some diplomatic heavyweights to help. He's tapped Kurt Campbell, a former assistant secretary of state, to oversee White House Asia policy. Former Secretary of State John Kerry will take a lead in climate diplomacy.

"There are some traditional foreign policy experts who think this is a really bad idea to have too many chefs in the kitchen," Green said. But "given all the challenges he faces," he doesn't see how Biden can avoid it.

In his confirmation hearing testimony, Blinken described his own American story, saying his grandfather Maurice Blinken found refuge in America after fleeing pogroms in Russia.

His late stepfather, Samuel Pisar, a Holocaust survivor from Poland, escaped a death march and was rescued by Sgt. Bill Ellington, a Black GI.

Blinken said in his testimony that Pisar "fell to his knees and said the only three words he knew in English that his mother had taught him: God Bless America. The GI lifted him into the tank, into America, into freedom. That's who we are. That's what we represent to the world, however imperfectly, and what we can still be at our best."