Open Thread: Can This Lyric Be Saved?

Open Thread: Can This Lyric Be Saved? 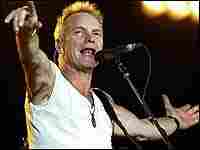 Music critic Jon Dolan went to town this morning on Sting, who topped the list of Blender's 40 worst lyricists of all time.

Sting dragged home the big trophy, courtesy of songs like "Don't Stand So Close to Me" -- which Dolan said seemed crafted for Google Alerts. But Luke Burbank had a bigger problem with Sting's work, particularly with the ballad "Fields of Gold."

After the bump, a snippet of Sting at his putative worst, and a challenge to you, dear reader.

In the immortal words of Sting:

So she took her love

For to gaze awhile

Upon the fields of barley

In his arms she fell as her hair came down

Among the fields of gold

Your mission is to save this lyric. Rewrite it. Recast it. Or defend it with love. Ready, steady, go.