CLOSED: Who Are Ron Paul's Supporters? 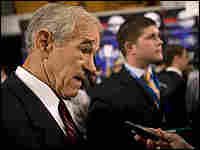 Greetings, Ron Paul fans. You've been an incredibly civil, thoughtful, well-spoken and engaged crowd. Thing is, you're also an incredible crowd -- so much so that we can't keep up with turning on all your comments. As of 8:10 or so a.m. Eastern, we're going to turn off commenting on this thread. If time permits, we'll circle back and post comments that were filed earlier.

And we do hope you'll keep hanging around the Bryant Park Project. You've become part of the show, and we'd really miss you.

Bennett Roth of the Houston Chronicle gave the home view of GOP candidate Ron Paul today. Roth says it's hard to tell where Paul's supporters are coming from, but he argues the most ardent backing is not in Texas but in places like California and Florida.

Roth thinks Paul has become such an Internet phenomenon in part because he connects with a demographic that finds a natural outlet online:

"He appeals to a certain group of people that I'm guessing are a little bit younger, a little bit more male, and certainly very disaffected, who maybe don't get their news from the mainstream papers."

Ron Paul supporters, we'd love to hear who you are.