About That Wolf: A Romeo Update

About That Wolf: A Romeo Update 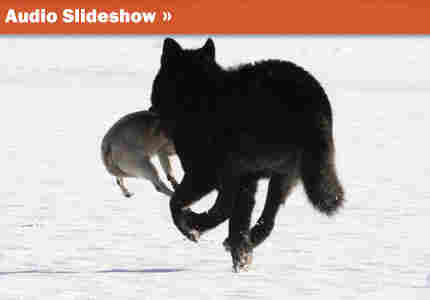 Snow cyclist Jill Homer told us the story of Romeo, the legendary lone wolf of Juneau. Several of you wrote in with ideas for getting Romeo a little companionship.

Now a listener named Harry R. has added a few details. Harry says that the pictures of Romeo with the pug were taken by a local man. (UPDATE: I just talked to the man, and he still wants to be anonymous.) Here's the redacted message from Harry R.:

Romeo is a male Alexander Archipelago wolf, approximately 5 1/2 to 6 years old. I've known him well for 5 of those years. It is thought that he and his (dead) mate were the sole survivors of a pack that had been locally trapped. His mate was subsequently killed after being hit by a cab while pregnant with four almost born pups. Wolves often only have one mate in their lifetime. Solitary wolves are rarely accepted into a strange pack, but sometimes, several strays will band together for companionship.

While rarely seen in the summer, Romeo does live in the Mendenhall Valley area year round... he's just much more visible in the winter. His name was derived from his friendly disposition, and his well-known love for playing with dogs.

Though rumors have circulated, there is no evidence that any dog has ever been injured by Romeo. The pug shown being carried in the picture was owned by the daughter of a local [man]. He had brought the pug and two other dogs into the Mendenhall Lake area hoping to attract Romeo so he that could photograph him. The photographs in question are his... taken by a very fast and expensive Canon camera. In truth, Romeo picked up the pug in his mouth, carried him for about a 1 and half seconds, and then dropped him completely unharmed. The pug flipped to his feet and Romeo traveled about another 10 feet and stopped... end of story. [The man] (minus the pug) was out doing the very same thing the next day with the other two dogs. [He] later submitted these pictures to the Juneau Empire (anonymously) and to the Anchorage Daily News (where he was credited).

Romeo is a true wild wolf, and should be respected as such... but in reality, is far better mannered than many of our local dogs. Over the years, his presence has captivated hundreds of visitors and local Juneau residents. Concerned about his well-being, local Romeo supporters have formed a group called "Friends of Romeo" that look out for his interests and publish up-to-date news concerning his activities. Interested parties that supply an e-mail address can receive a free copy of their latest bulletin.

If anybody has any questions concerning Romeo, I'd be happy to answer them to the best of my ability...