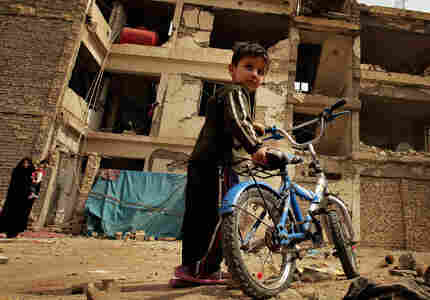 Tony Judt talks about America and the meaning of war.

In a book coming out on Monday, former White House press secretary Scott McClellan says that President Bush misled the nation to war in Iraq and that the president wanted to create for himself a "legacy of greatness." For the record, the White House calls McClellan "disgruntled."

McClellan certainly sounds displeased, at any rate. He writes:

"No one, including me, can know with absolute certainty how the war will be viewed decades from now when we can more fully understand its impact. . . . What I do know is that war should only be waged when necessary, and the Iraq war was not necessary."

McClellan's argument reminds me of a conversation I had recently with someone from the other end of the political spectrum. Writer Tony Judt describes himself as a Socialist Democrat, the kind of political thinker you might find in Scandinavia. Judt has been a vocal critic of the Bush Administration and the war in Iraq, but he's no pacifist. He considers war a valid branch of foreign policy, but only as a last resort.

Judt stopped by a few weeks ago to talk about his new book, Reappraisals: Reflections on the Forgotten Twentieth Century. Among his central ideas is that American policymakers reach for war too quickly, because we have forgotten what war really means.