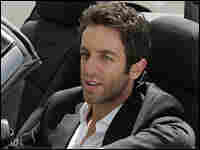 Today we spoke with BJ Novak, co-star, writer, and producer from The Office, which many of us (read: me) consider the best show on network television. (30 Rock may be blatantly funnier, but The Office is overall better.)

Mike Pesca, himself a big booster of the show, spent about 40 minutes talking to Mr. Novak, covering some of the real nitty gritty of the show's production. In the end we cut it down to 14 minutes, with a bunch of clips from The Office mixed in. We tried to make a segment that would appeal to hardcore fans of the show as well as newbies. (Here's that segment.)

But we've also decided to make the raw, uncut version of the interview available here, for all you Office-obsessed fans out there. This version doesn't have the perfect mix, it doesn't have the sound clips of the show dropped in, and it might even contain--gasp!--a stutter or two. But it probably has as much insight into the show as anything you've heard or read. So grab some popcorn and enjoy: