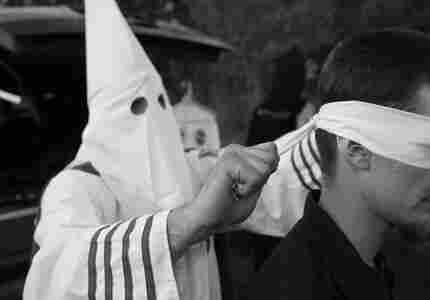 It took me about a month to gain the trust of photographer Anthony Karen. Ironic, considering he's usually the one trying to ease people into talking to him. I saw a photo essay on Mother Jones of his photos of a woman who makes the hoods and robes for her local KKK, the images part of a series Anthony's done on the Klan. I thought he'd be a great guest for the BPP, offering a rare peek behind those hoods and inside the closed rituals of this notorious group.

But Anthony wasn't so eager to get more media coverage. That slideshow opened him up to a whole slew of criticism and nasty comments- claims that he, too, is a racist or that he's some kind of Klan sympathizer. He says excerpts of his interview with Mother Jones for that slideshow were taken out of context, making it sound like he'd either bought into Klan ideology or was naive to their history. Neither is the case.

It's a tough position to be in when you're documenting such a sensitive subject. As a journalist -- whether with a pen, a recorder or a camera -- you're there to document, not to judge. For those outside the profession, it can be hard to reconcile how a person who doesn't share the same hateful ideologies as the KKK can cultivate relationships with them, eat with them, get to know them and even find some of them to be kind and likeable people, outside of their beliefs. But that's journalism on a master level -- suspending judgment, gaining trust, and getting the story. It's hard.

I had to do it in a former job when I was assigned to produce an interview with a former member of the Aryan Brotherhood, the violently racist prison gang. I'm an African-American woman and, at the time, my correspondent was an African-American male. The two of us went down to a Texas prison to meet this guy on death row. As we approached him, shielded behind bullet-proof glass, he stood up, smiled and said, "Ma'am, nice to meet you." Let's just say "ma'am" was the last thing I expected him to call me. I actually found him to be quite nice, despite the tattoos of extremely offensive words about people like me on his body. But whether I liked or loathed him, it had nothing to do with my job as a journalist. So I smiled back, thanked him for talking to us, and got the cameras rolling.