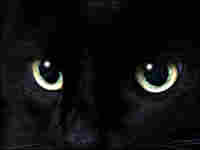 On today's show, we heard from folklorist and psychologist Donald Dossey. Dossey says an estimated 17 million to 21 million Americans have some form of fear of Friday the 13th.

Now, me, personally, I'm about to go get on my bike and ride to Brooklyn. And I have to admit, I'll be thinking about Friday the 13th. Dossey says he tells his patients to relax about it -- advice that works to a point. "You've got to be careful trying to use logic, because logic does not work by the very nature of a phobia," he says. "A phobia is an illogical fear."