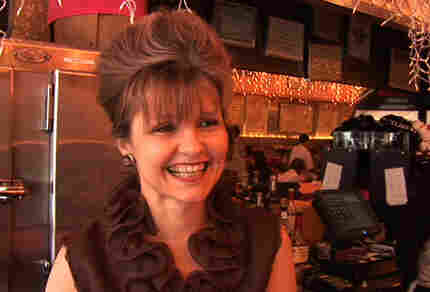 Manhattan's meat-packing district used to be just that: A few blocks in New York City choked with butchers and wheezing freight trucks.

Today, however, the neighborhood is a well-known and trendy spot for some of New York City's fanciest shops and restaurants. (Think "Sex and the City," which some people blame for the neighborhood's demise.)

When I walked around the Meat Market on Sunday, I saw a sign bolted on a building for a long-departed tenant: "Lambs Unlimited." Underneath, people ate brunch on white table cloths to music set by a turntable DJ. On the next block, a Helmut Lang store. Around the corner, Restaurant Florent.

Watch our video (it's also after the jump) about Morellet and the closing of this beloved downtown mecca.

And here's a story that's not in the video, about the only celebrity who ever flummoxed the hostess . . .

When you watch it, you'll meet Florent's dinner hostess, Darinka Chase, who has worked at the restaurant for the last 22 years. Before I met her, people told me I just had to talk to Darinka, "The woman with a beehive." No one told me her name without mentioning her hair. And when we spoke, she told me that a few months back she saw Amy Winehouse at a table.

You should know that Darinka is not fazed by celebrities. The restaurant is frequented by them over the years: Michael Stipe, Madonna, Calvin Klein, many others and the policy is to treat them like everyone else. And that's probably what keeps them coming back.

Back to the story. Darinka sees Amy Winehouse and gets flustered. This star has a different effect on her. All she can manage to say to her is "Hi." Darinka told me in disappointment, "I couldn't even say 'I like your hairdo.'"

The Florent video, in full: