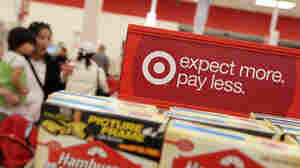 Target Says Some Of Its Gift Cards 'Not Properly Activated'

December 31, 2013 • The country's third-largest retailer, already smarting from a major breach of its customers' credit and debit card data, now says a small percentage of the gift cards it sold may not work properly. 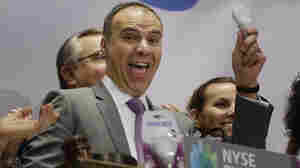 Out Like A Bull: 2013 Was A Banner Year For Wall Street 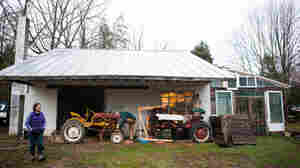 Chris and Sara Guerre are among a growing number of farmers who have made the choice to rent land to farm instead of buy because of increasing property values. Zac Visco for NPR hide caption

December 31, 2013 • Across the country, there's a wave of interest in local food, and a new generation of young farmers wants to grow it. But many aren't buying land. Instead, they're renting it. 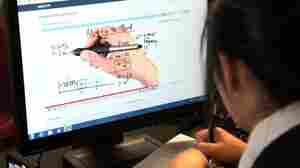 Students at the Oakland Military Institute took several courses offered by San Jose State and the online course provider Udacity this year. The university is now scaling back its relationship with Udacity. Laura A. Oda/MCT/Landov hide caption

December 31, 2013 • In 2012, "massive open online courses" were lauded as the most important trend in higher education. But this year, educators and even students rebelled against the rapid expansion of online learning. Two of the biggest MOOCs say they're making big changes in how they deliver their classes in 2014.

Cabbing Home From That New Year's Party? Expect To Pay A Premium

December 31, 2013 • Planning on celebrating the New Year? If you are worried about driving home and plan to take a cab, you'll have plenty of competition. Cab fares soar during the first few hours of a new year, and then come back to normal around 3 a.m.

Cabbing Home From That New Year's Party? Expect To Pay A Premium

2013 Was A Tremendous Year...At Least For The Stock Market

December 31, 2013 • Stocks in the U.S. had a banner year with all the major indexes finishing with better than 20 percent returns.

2013 Was A Tremendous Year...At Least For The Stock Market 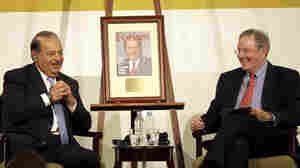 December 31, 2013 • When the North American Free Trade Agreement was being negotiated, supporters promised it would increase the income of Mexicans. And the middle class did grow over the past two decades. But it's clear that the country's ultrarich are its big winners.

December 31, 2013 • The giant coffee chain sent a cease-and-desist letter to the owner of Exit 6 Pub and Brewery in Missouri. Starbucks told the pub to stop referring to one of its dark, frothy beers as "the frappicino." Starbucks noted it sounds a lot like its trademarked frozen coffee drink.

December 31, 2013 • In the U.S. last month, home foreclosures fell to the lowest level since the mortgage crisis began eight years ago. But in Connecticut, and several other states, foreclosures are still rising dramatically.

December 31, 2013 • The Federal Aviation Administration has picked six states which will get to test unmanned aerial vehicles. The sites will begin testing how to integrate drones into U.S. airspace, sharing the skies with passenger planes.

Electricity Use Drops In U.S. For 3rd Year In A Row

December 31, 2013 • According to the U.S. Energy Department, the drop is because big household appliances are more efficient than ever. The department also predicts home electricity use will continue to fall in 2014.

Electricity Use Drops In U.S. For 3rd Year In A Row 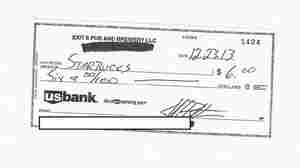 After being told that one of his products infringed on a Starbucks trademark, brewpub owner Jeff Britton wrote the coffee company a check. Exit 6 Brewery hide caption

December 30, 2013 • After a small brewery owner got a letter from a law firm representing Starbucks, he saw a chance to draw distinctions between the two businesses — and to be funny. 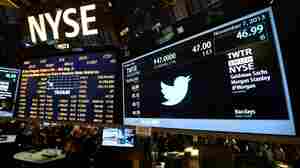 Twitter made its debut on the New York Stock Exchange in November. Both the social media giant and the relative newcomer Snapchat are valued in the billions, but neither company has yet turned a profit. Emmanuel Dunand/AFP/Getty Images hide caption

December 30, 2013 • In Silicon Valley, zero profit and even zero revenue don't make a company a loser. Tech companies like Snapchat and Twitter, which have not yet turned any profit, can be worth billions of dollars based on future potential alone.

Looking Ahead At The Next Top Tech IPOs

December 30, 2013 • Every year, research firm CB Insights offers up a report on the fastest growing and most highly valued private companies in technology — basically, the ones most likely to go public. Audie Cornish speaks with Anand Sanwal, CB Insights' CEO, for a look at the top tech IPO's expected in 2014.

Looking Ahead At The Next Top Tech IPOs

December 30, 2013 • Industry officials say they are on course to boost production to as many as 4 million autos annually. That's good news for Mexico but has many in the U.S. worried, especially as Audi gets ready to build a new luxury line plant in Mexico and not in the U.S.