Freedom to Report at Zipingpu Dam

We'd read reports that cracks had appeared in the dam's wall.

A row of green tents was perched at the far end of the road crossing the Zipingpu Dam Inside was the man responsible for the dam's safety, Mr. Hu. He was fielding calls on a red plastic telephone in this makeshift command center.

We'd read reports that cracks had appeared in the dam's wall following the earthquake, and apocalyptic warnings that if the dam were to collapse, water would surge downriver threatening Dujiangyan, a town of half a million people already reeling from the death and destruction meted out by this earthquake. Now having tracked down Mr. Hu, I was hoping for some official clarification about the extent of the damage.

But to be honest, having worked in China for five years, I was skeptical about my chances. In my experience, getting interviews with officials requires repeated faxes, numerous phone calls, days or even weeks of cajoling or sometimes downright begging.

When Mr. Hu asked to see my credentials, my heart sank. But then he picked up his red plastic phone, and asked for some statistics. And then he started answering my questions. No, he said, the dam was not dangerous. 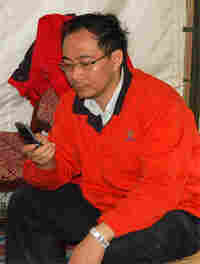 A team of specialists had already conducted an examination. Measures were being taken to lower the water level in the reservoir to reduce pressure on the dam wall. And Mr. Hu repeatedly emphasized that such cracks were allowed for in the dam's design. Sure, he wanted his message out ther, but, strange as it may seem, for me, the simple experience of asking a government official questions face-to-face represents a step forward.

Outside the green tent, I met Ma Jia, a journalist from China Water Resources News, who was scribbling in a tiny notebook. "We heard rumors about the dam, so I came down immediately to check out what was happening," he told me. "My colleagues have gone elsewhere to investigate the situation at other dams."

Walking back across the dam, I came across a local television crew, who had set up a satellite phone there and were trying to do a live broadcast. It's noticeable that the local media are tackling the same difficult questions as the international media; one comment piece in the Economic Observer asks why "elegant government buildings remain intact while dozens of schools crumbled like sand houses."

It seems the Chinese media are being given a freer reign to report on this natural disaster. In the past, the government response to unexpected emergencies has been an instinctive tightening of restrictions on the media. That has been accompanied by an official strategy of denial, cover-up, followed by belated admission.

This time round, difficulties in the relief operation are being acknowledged openly; today the government launched an unprecedented appeal for public donations of hammers, shovels and demolition tools.And the local radio stations here have been asking for medical supplies as well.

Maybe China's leaders have learned from their past mistakes, or maybe they've been watching Myanmar's disastrous response to its deadly cyclone, or maybe they realize a new strategy is needed in this interconnected world of texting and telecommunications.

Whatever the reason, local journalists seem to be taking advantage of the unexpected openness to push back the boundaries. 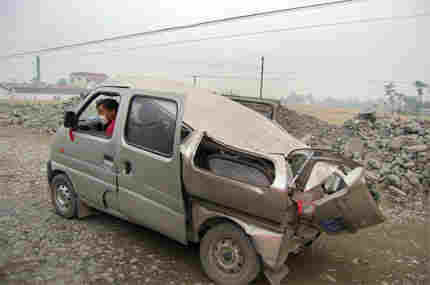 Determined driver pushes on despite a van crushed in May 12th earthquake. Photo by Brendan Banaszak, NPR hide caption