Mom is coming for you!

Link to the story:
Families Frantic to Find Loved Ones in Rubble
May 14, 2008 — All Things Considered 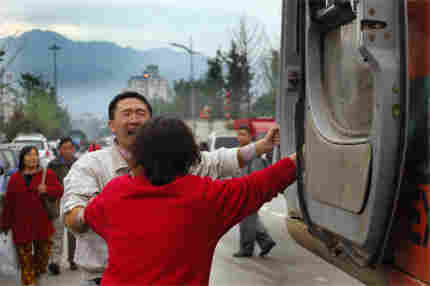 This was the moment we first saw Wang Wei and Fu Guanyu, as they were begging the driver of an excavator to go to their house to try to rescue their son and his parents. Photo by Andrea Hsu, NPR hide caption

We found Fu Guanyu and her husband Wang Wei as they clung frantically to the long arm of a Hitachi excavator as it rumbled through the city of Dujiangyan.They were crying and seemed to be trying to pull the heavy machine, as if they could make it move faster toward their home. Their six-story apartment building had collapsed in the earthquake. Their toddler son, Wang Zhilu, was buried under the debris along with his grandparents. Mrs. Fu broke down as she told me she still had hope their son would be found alive. 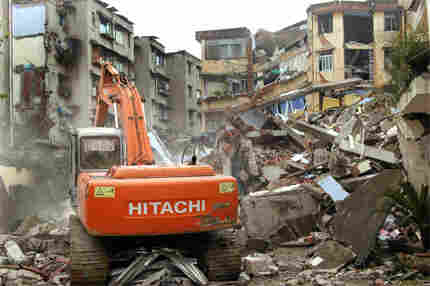 An hour or so later, the excavator was at work on the rubble that was the six story building where Wang Wei's parents lived. Photo by Andrea Hsu, NPR hide caption

She had just left for work on Monday when the earthquake struck. She told me, sobbing, that the boy begged her before she left, "Mom, please don't go." The panicked couple led the excavator through this city of half a million. The Wang family said soldiers came quickly to help them on Monday after the quake hit but they had no heavy equipment. Now the equipment had arrived but couldn't get through the gate into the apartment complex without knocking it down. A local official phoned for permission, permission was granted-and the excavator made quick work of destroying the gate. Mrs. Fu and Mr. Wang rushed toward the remains of their building.

Fu Guanyu watches anxiously as an excavator pulls through the rubble in search of her son and his grandparents. Photo by Andrea Hsu, NPR hide caption

The structure had toppled sideways and collapsed, pancaking on itself. No walls were standing-just massive slabs of masonry-rebar-and bricks-in a pile three stories deep. Mrs. Fu trembled and wept as she watched the claw lift huge pieces of the building aside so workers could get toward the interior. She told me she had climbed up on the rubble pile three times since Monday, calling for her son. When the excavator finished clearing some of the largest pieces, she and her husband clambered up the debris pile, calling out the boy's name- "Wang!" she cried in a trembling voice. "Mom is coming for you!"

But the utter devastation of this building, with no air pockets visible, left little hope that anyone inside could have survived. A long wait began. Eventually, enough rubble was cleared that a woman's hand became visible emerging from the debris, a thin band on the right ring finger. Another family climbed up and made the painful realization that they recognized the ring. The stench of death started to fill the courtyard.

With some bodies now found, the military was called in. Soon, about three dozen military police arrived in green camouflage fatigues and black rubber boots but with no supplies or equipment. Mrs. Fu and Mr. Wang ran out to buy them cotton gloves and white cotton face masks. Other neighbors brought shovels. 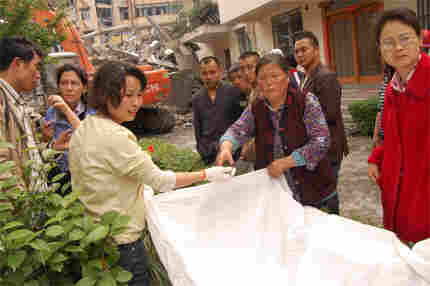 Neighbors bring Fu Guanyu a piece of white cloth, and tell her, we hope they haven't died, but if they did, you can use this to cover their faces. Local tradition dictates that the faces of the dead should not be seen by people outside the family. Photo by Andrea Hsu, NPR hide caption

Friends brought out a white sheet and told Mrs. Fu they hoped her son and his grandparents would be found alive but just in case, they would tear this sheet into pieces so they could cover the victims' faces. 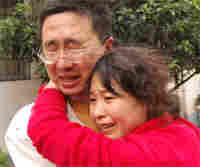 Wang Wei and Fu Guanyu early in the day, as anxiety and fear overtake them. Photo by Andrea Hsu, NPR hide caption

And as the day dragged on, any hope seemed to drain from the parents' faces. The couple began sobbing, holding each other tight. "I should have brought him with me to work," Mrs. Fu wailed, as she sagged into her husband's embrace. "He didn't want me to leave him!" Local officials arrived to tell the family that if the bodies were found, they would be taken away for quick cremation out of fear that disease would spread. But there are so many bodies in this badly-hit city that the local authorities are overwhelmed. Mrs. Fu and Mr. Wang settled in for a long wait. Friends came with bags holding paper money, incense and firecrackers. The paper money would be burned for the victims to use in the afterlife; the firecrackers would ward off evil spirits. In the meantime, waiting. And hoping against all hope.

At 4:40 in the afternoon, a worker came out and said, "We've found a child." The parents went limp. "Was he about two, wearing a striped shirt?" the mother cried. The worker nodded. The parents, along with aunts and uncles, sobbed and clutched each other tight. The mother cried out to the worker through her tears one last desperate appeal, "Did you call out to him? Maybe he had just fainted."

Wang Zhilu, two months shy of his second birthday, was found in the arms of his grandfather, with his grandmother holding onto her husband from behind. All three were dead - three among what are likely to be tens of thousands of people who perished in Monday's earthquake.

Note: Melissa revised this post at on May 14, 2008 at 2:54 p.m. eastern because some readers were unclear whether the family had survived.

Melissa Block adds from Chengdu on May 17th: 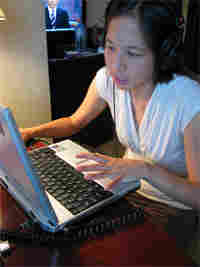 My profound thanks to all our listeners and readers for this outpouring of response to our stories. Please know that there two people who go uncredited but who deserve the lion's share of praise for my reports that you hear on the air and read on this blog.

The first is my longtime producer Andrea Hsu. She's indefatigable, with a keen ear, a sharp eye, unerring journalistic instincts, and above all, a good heart. As a bonus, she's a fluent Mandarin speaker. Andrea is doing all the audio recording for my reports, along with taking all the remarkable photos you see here. I'm convinced she has more than two hands. She's also responsible for editing the tape and carefully organizing and crafting the audio that you eventually hear on the radio or online. There's no question: without Andrea, these stories would never get on the air. 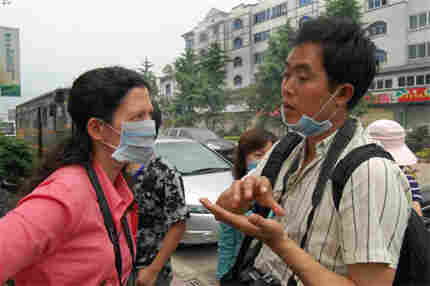 Philip He interprets for Melissa Block in the center of Dujiangyan. Photo by Andrea Hsu, NPR hide caption

The second is our interpreter, Chengdu resident Philip He, who has been by my side all week and has become much more than an interpreter. He has been instrumental in securing the trust of the people I've been able to talk with around Sichuan, which is no small feat.

At a time when there is intense distrust of western media, Philip has been able to reassure residents here that NPR is fair and will present an undistorted view of what is happening. He's also conveyed to them that we have an audience in the US that is responding with a flood of support for the Chinese people. NPR could have no better ambassador in China than Philip.

One last thing you might want to know. About an hour after we left Mrs. Fu and Mr. Wang, whose story you just read and heard, Mrs. Fu sent a text message to Phillip. She thanked him for letting her use his mobile phone during the day we spent with them. And she thanked us for telling the story of their family to our audience. Keep in mind that this is a woman who had just hours before learned of the deaths of her toddler son and her husband's grandparents. At that moment, she was arranging for their hasty cremation. But somehow she found the time to send a message of gratitude to us. That gesture is something I still can't begin to fathom.

Listen to the story:
Families Frantic to Find Loved Ones in Rubble
May 14, 2008 — All Things Considered