Scenes From Beichuan, Old And New

Scenes From Beichuan, Old And New

A few thoughts on our report that runs on All Things Considered today about the city of Beichuan, old and new: some things you didn't hear in the radio story.

I posted earlier about the uncomfortable tension I sometimes feel here: knowing that I have to ask painful questions for these stories, and hating that I'm asking them. This was the case when I talked to the vendor you hear in today's ATC story, Mu Zhenxian. 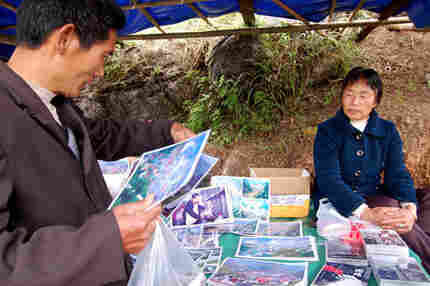 Local vendor Mu Zhenxian lost 16 relatives in the quake. She now sells photos and DVDs of earthquake destruction on a hill overlooking the city of Beichuan. Andrea Hsu/NPR hide caption

Sixteen members of her extended family were killed in the earthquake, their bodies never recovered. Now, she sells earthquake memorabilia to tourists who come to stare out over the shattered city where the bodies of her family members are entombed.

As we talked about what had happened to her family in the earthquake, Mu was quite stoic, pointing out on an aerial photograph where her daughter and her niece were killed. But when I asked her if it bothers her that noisy tourists with snacks and cameras come by to pose for pictures in front of the wreckage, tears began to glisten in the corner of her eye. She continued to talk quietly for some time, wiping away the tears as they slid down her cheek. When she told me she felt responsible for the death of her young grandson who was in her care when the earthquake struck, her voice broke. "I should have been the one to die, " she told me. "The little boy shouldn't have to die."

"It's not your fault," I offered feebly. Small consolation indeed.

Fifteen miles south, away from the mountains, they'll soon be building the new city of Beichuan on a flat river plain. Right now there's no construction underway; they're still leveling the ground. But Beichuan officials promise that by the end of 2010, a city will have risen with homes for 30,000 earthquake survivors.

I went to the worksite with a friendly 22-year-old staffer from the county propaganda department, Wang Shoulei.

A few weeks ago, one of his colleagues from that department, 33 year old Feng Xiang, committed suicide. Feng's seven-year-old son had been killed in the earthquake. As I mentioned in my earlier post, Feng wrote a blog message on the day he hanged himself. It included these exhausted words: "I really find it too painful to be living. Please let me rest." You hear a lot about the pressures these local officials are under to speed up the pace of rebuilding.

Wang Shoulei nodded when I asked him about the stresses. "Yes, some people are experiencing a great deal of pressure, " he said. But Wang and many other officials were brought in to Beichuan from elsewhere, to replace the hundreds of Beichuan leaders who were killed in the earthquake. Wang is from Shandong province - 1,000 miles away - so he's surely not experiencing stress in the same way as someone who saw his city crushed and his colleagues die.

Just before we left, a man in a suit and tie with trendy glasses walked up. I was a little worried we were about to get kicked off the site. Instead, he greeted us with a big smile: "Welcome!," he said. Bai Hua is a builder from Shandong province in the east, sent here to rebuild Beichuan. 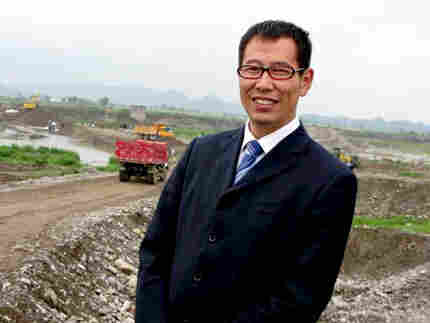 Bai Hua, of the Shandong Good Guy Construction Company, on the site of what will become the new city of Beichuan. Melissa Block/NPR hide caption

The name of Mr. Bai's company translates as the Shandong Good Guy Construction Company, and he seemed like a genuinely good guy. A year from now Bai told me he can envision the muddy, open field we were standing near transformed into a new city, with walkways and beautiful trees and flowers, and, he says, "people leading a happy life."

But first things first. As we left, I asked about the two sets of gigantic poles that have been erected - each maybe four stories high - facing the road. Those are for the billboards, Bai explained to us: supersized testimonials to the new Beichuan. They'll include an inspirational message from Chinese premier Wen Jiabao. Soon, those billboards will greet passers-by, trumpeting the new city that will rise to replace the ruined one. 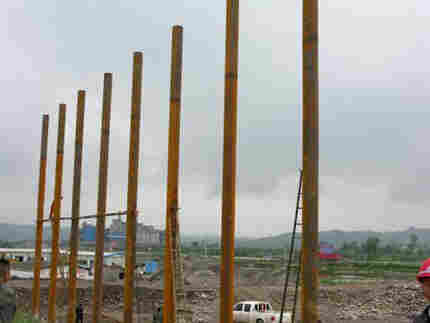 Gigantic pillars form the structure for a super-sized billboard that will promote the new city of Beichuan. Melissa Block/NPR hide caption