Accessibility links
An Accused Killer Seeks An Audience With Everyone : Code Switch The former Los Angeles police officer accused of killing three people and shooting others addressed a letter to Americans airing his grievances. How are we to respond?

An Accused Killer Seeks An Audience With Everyone

An Accused Killer Seeks An Audience With Everyone 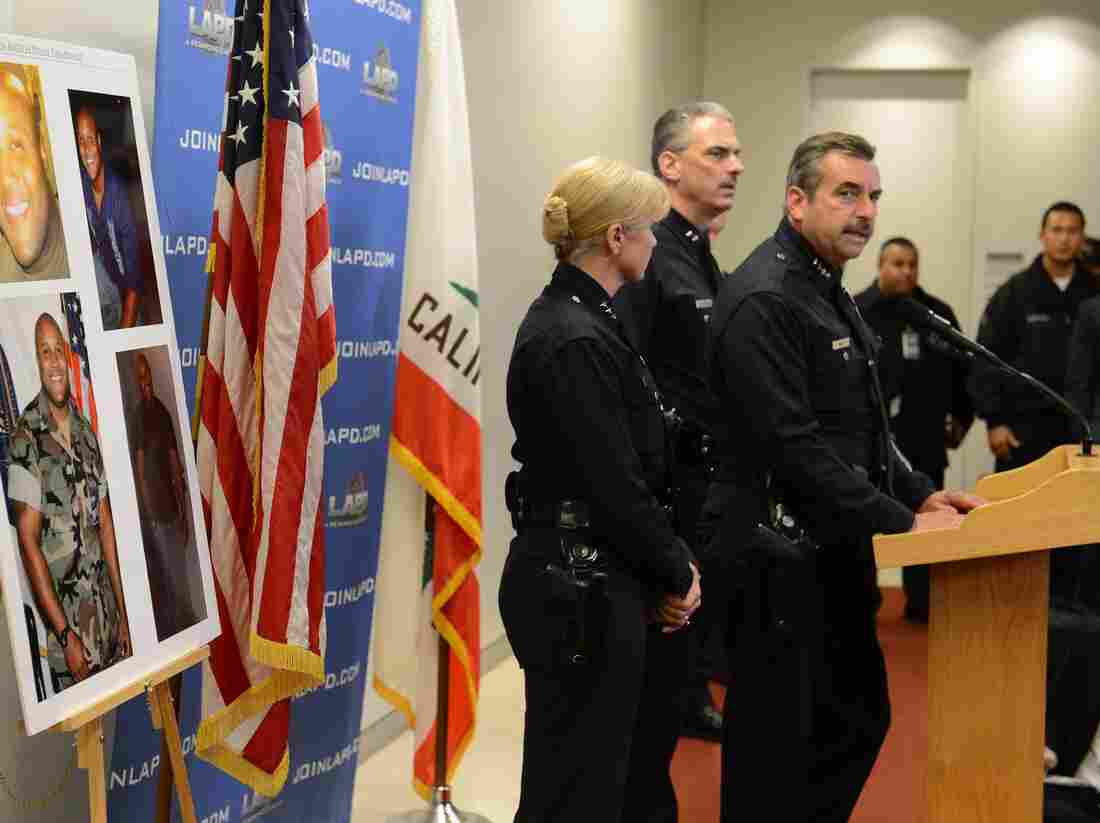 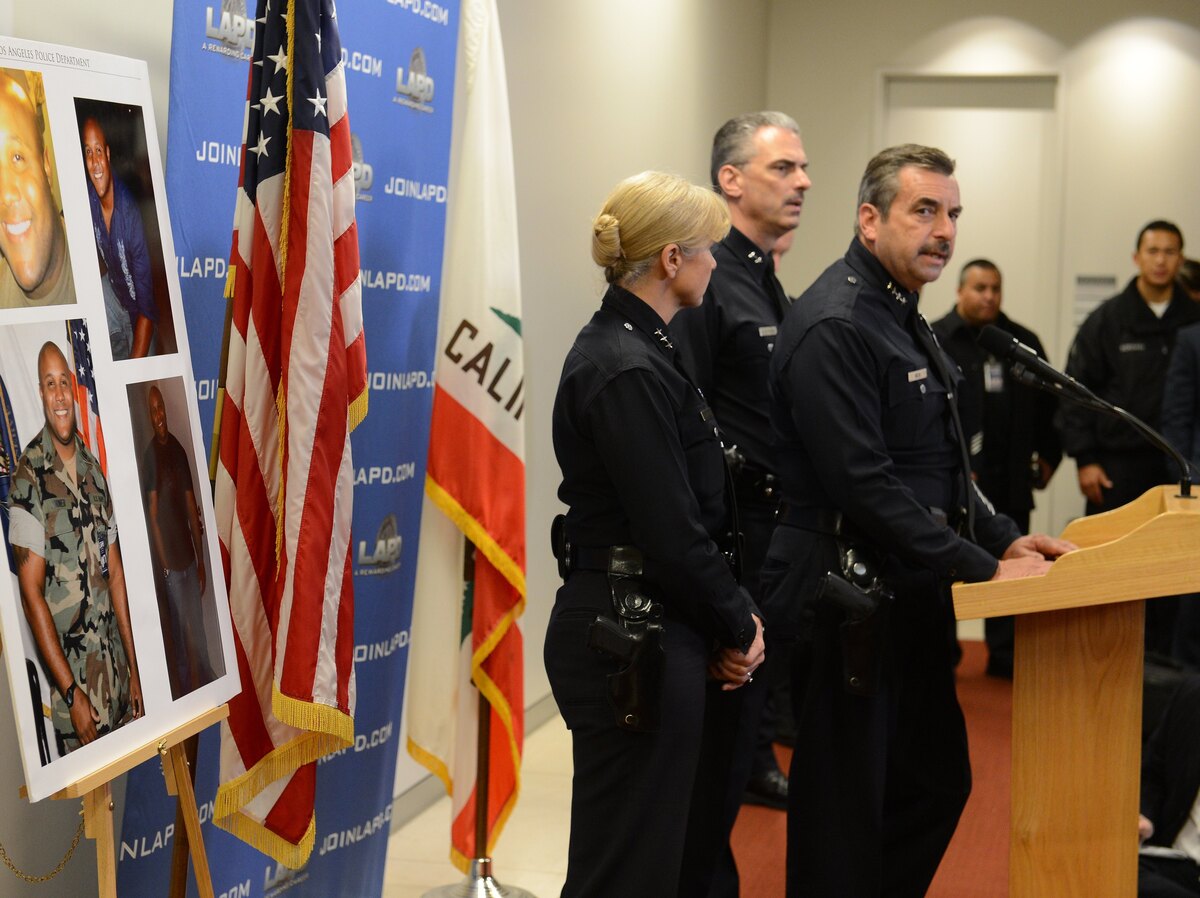 That's the header on a 14-page letter attributed to Christopher Dorner. The former Los Angeles police officer is the focus of a massive manhunt spanning California, Arizona, Nevada and Mexico after he allegedly shot and killed three people — including a police officer — and wounded several others during a shooting spree.

The letter is a fascinating document, full of grievances and digressions. It's not really a call to arms, not really a manifesto. It's more like an open letter, that staple of the aggrieved and indignant, especially in the Internet age.

In it, Dorner says that he was blacklisted and pushed from his job on the force after reporting an incident of police brutality, and he claims that the Los Angeles Police Department is run through with racists.

Dorner addresses the letter to "America," but seems to want to talk to each and every person in it: white cops, black cops, lesbian cops, Asian-American cops, the assistant principal of his high school, his knee surgeon, the director of The Hangover, and countless others. He tells New Jersey Gov. Chris Christie he's a fan and tells Michelle Obama he loves her bangs. And in a moment of dark irony, he calls out National Rifle Association CEO Wayne LaPierre, lamenting that military-style firearms are widely available to the public. Dorner name-checks everyone. But to each group of police officers he names, he reserves an ominous distinction: "You are a high-value target."

Start with people like me, journalists and others in the news media, even this very moment calling your attention to Dorner's missive. We're one of Dorner's main constituencies — he specifically asks us to fact-check him. CNN's Anderson Cooper tweeted that Dorner sent him a package in the mail.

This makes publicizing his message problematic: "It seems he created this manifesto with an eye to having it published," says Eric Deggans, a columnist at the Tampa Bay Times. "I'm worried that it might encourage him."

But Deggans and other journalists said that even if news outlets wanted to ignore messages like these, they can't do so anymore. The media landscape has changed too much.

Kelly McBride, a media ethicist at the Poynter Institute, says that outlets that ignore Dorner's letter run the risk of becoming "irrelevant."

"I think that it's very different now than it used to be," she says. "He created the megaphone. I know it seems like he's talking directly to the media but I don't think it works that way anymore." Multiple news outlets have reported that Dorner initially posted the letter to Facebook.

McBride says she worries that journalists run the risk of becoming overly sympathetic to the LAPD and won't verify the claims that Dorner makes in his manifesto. (She praised CNN, in particular, for digging into and disproving an assertion about an incident Dorner makes in the letter.)

Dorner was also hoping to get the attention of his former colleagues in the police department. His letter is studded with police jargon; the beginning reads like an incident report. Are police officials likely to take seriously his charges of wanton brutality and wrongdoing even though he allegedly killed three people and wounded several others?

They could, says Officer Eisenman, an LAPD spokesperson. (She declined to give her first name.) She said that while she couldn't comment specifically on the ongoing Dorner case, it was "common sense that [those claims] will probably be looked at."

"It doesn't annul the fact of what he's stating," Eisenman says. If there's going to be an investigation of his allegations, it won't be until he's captured, she says.

Saturday evening, after this story was initially published, Los Angeles Police Chief Charlie Beck said he had asked for a full review of Dorner's complaint about his firing, as well as investigations into other allegations in his letter.

Even after all the people Dorner directly names, there are still some audiences left implicit. Charges of police brutality and racism have long been a point of serious friction between local cops and Angelenos. What happens when a letter championing an issue you care deeply about becomes associated with a grisly spree killing?

It's an open letter to everyone in America, and versions of it — both redacted and unedited — can be easily found all over the Internet.

Do you seek it out? Do you read it? How do you handle a letter like this?

UPDATE: A link to a CNN story attempting to verify statements Dorner made in his letter has been changed.