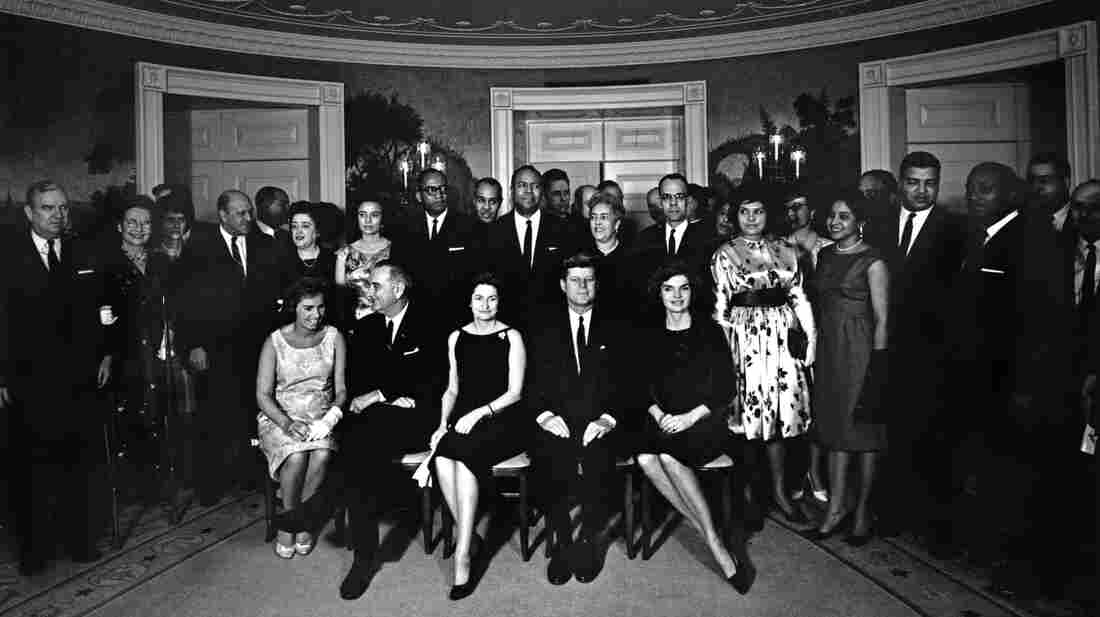 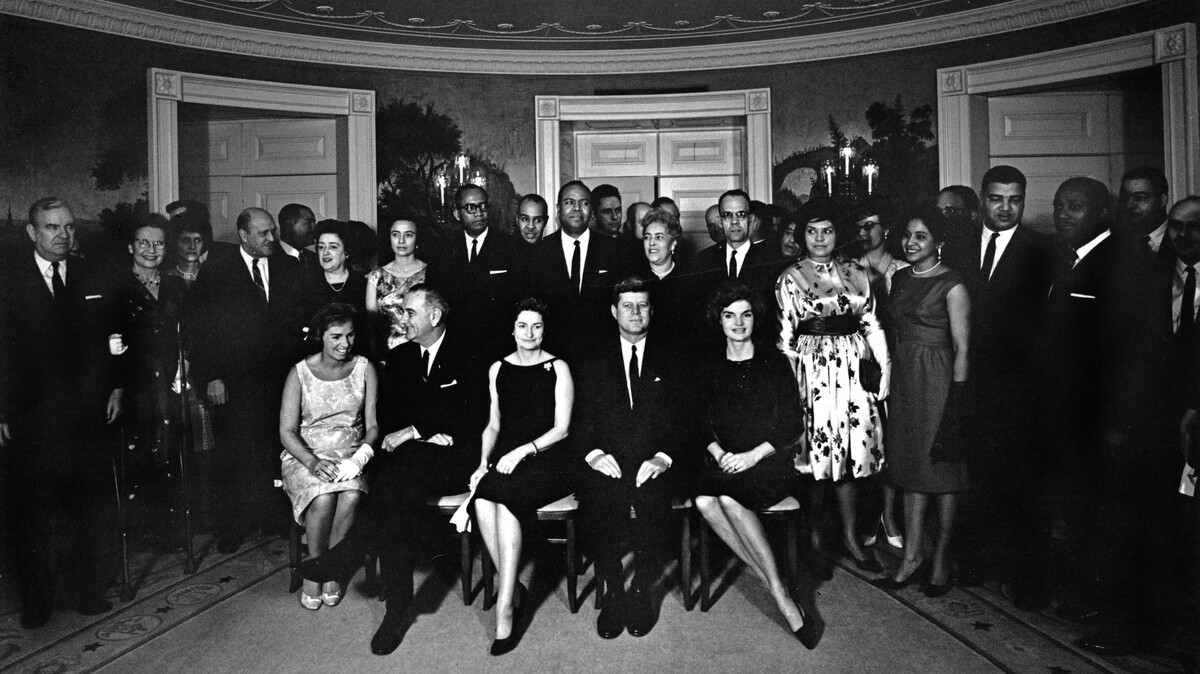 Fifty years ago, the White House was the site of an unusual party.

It was a celebration of the Emancipation Proclamation's centennial, held on Abraham Lincoln's birthday, and many of the guests were descendants of the people Lincoln's historic document freed.

But noticeably absent was the Rev. Martin Luther King Jr. The civil rights leader had declined the invitation after earlier conversations with President Kennedy about segregation had yielded few results.

That frosty winter evening, the White House gleamed with lights as hundreds of black guests made their way up the driveway and into the mansion's brilliant warmth. Inside, John and Jacqueline Kennedy circulated in a vast reception room, shaking hands and chatting with partygoers.

Simeon Booker, considered the dean of Washington's black press corps, chronicles the evening in his new memoir, Shocking the Conscience, which covers his 65 years as a journalist. The party's guest list, 94-year-old Booker says, was like a "who's who" of American blacks.

Politicians such as Michigan Rep. Charles Diggs walked by, greeting civil rights leaders like the NAACP's Roy Wilkins and the National Urban League's Whitney Young. John Johnson, influential publisher of Ebony and Jet magazines, was there with his wife, Eunice.

The presidents of the nation's most prestigious black universities were there too, along with entertainers such as Sammy Davis Jr. and his Swedish wife, Mai Britt.

Booker, who was the Washington bureau chief for Johnson Publications, says the reception was born of frustration.

"Kennedy had been in office two years, but he still had not sent a civil rights bill to the Congress," Booker recalls.

So Kennedy's advisers proposed a large reception to enable him to see some of his important black constituents up close. About 1,000 invitations went out, and people accepted, even though they weren't sure where they were going to stay. In 1963, Washington's finest hotels were still closed to Negro guests — no matter their stature.

Photos from that evening show the relaxed Kennedys at the vortex of elegantly dressed black people, as their Secret Service detail looked on tensely.

Booker said people were swarming around the president and that the party was a resounding success. But one person who everyone thought would be there wasn't: The Rev. Martin Luther King Jr. sent his regrets. 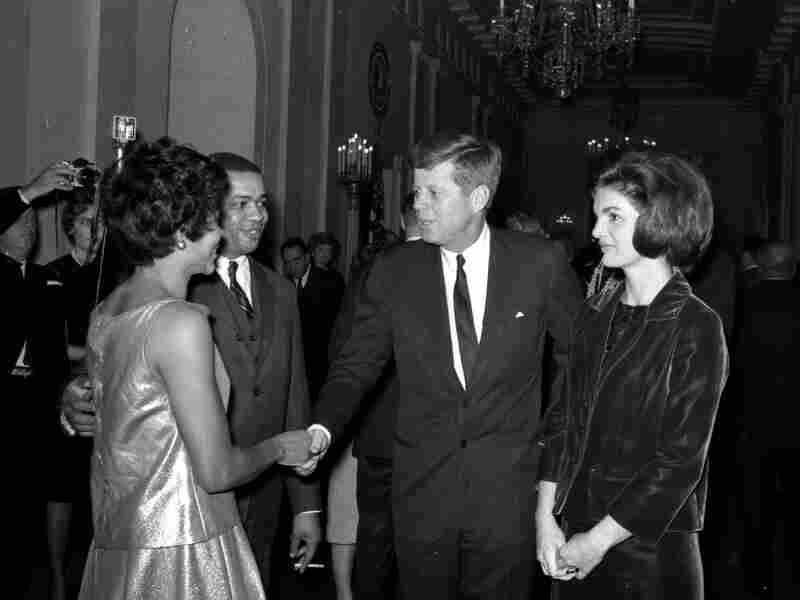 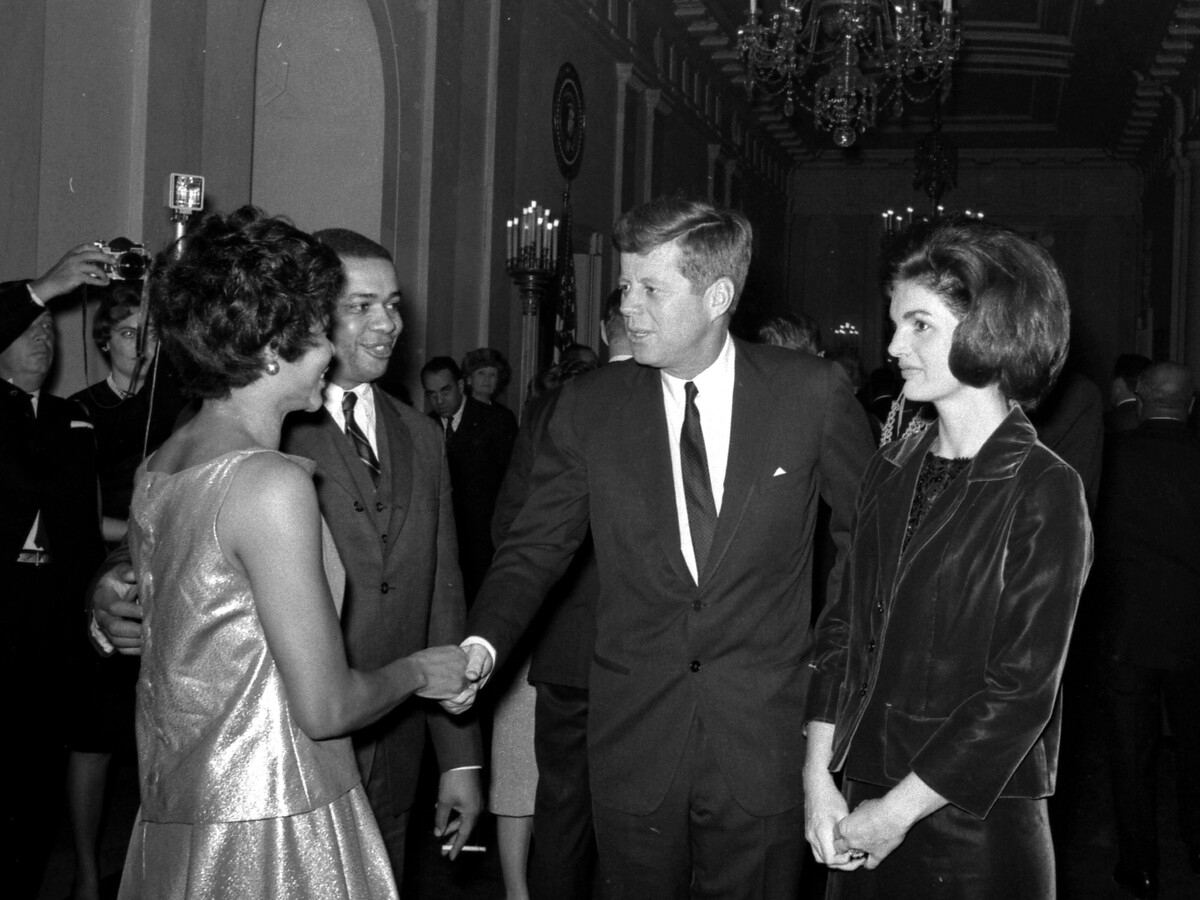 President and Mrs. Kennedy greet Clarence C. Feurgeson Jr., counsel to the Civil Rights Commission, and his wife, at the White House reception.

Historian Taylor Branch has written three award-winning biographies of King. His latest book, The King Years, looks at critical moments in the civil rights movement. Branch says King spent two years trying to get Kennedy to commit to a second Emancipation Proclamation. On a visit with Kennedy a year earlier, he says, King had pointed out a framed copy of Lincoln's document as they walked through the White House and asked the president to issue a new proclamation emancipating black people from segregation.

The president gave a polite, noncommittal answer. Branch says King went ahead and drew up a document anyway.

"He spent a lot of time with his lawyers, labored over it, embossed it, put it in a very fancy, leatherbound folder, had it delivered to the White House — and heard absolutely nothing," Branch said.

Branch says King finally realized he couldn't rely on Kennedy or other politicians to end segregation. He was going to have to push on with his foot soldiers and risk being jailed with them, for protesting their second-class citizenship.

So King and fellow civil rights leader A. Philip Randolph stayed away from the glitzy birthday party for Abraham Lincoln. Booker says it was a strategic move.

"They had no interest in attending a social event while younger blacks, including college students, were being arrested in the South for violating Jim Crow laws," he says.

Black students had begun staging sit-ins at lunch counters across the South, and their elders, initially taken aback by the disobedience, had begun to join them.

In fact, at the very moment the White House party was being held, King was upping the ante: He was drafting plans for what would become the Children's Crusade.

That spring, black students from middle and high schools in Birmingham, Ala., would be brutalized by the city's infamous police with high-power streams from fire hoses and police dogs as they protested segregation. It was a turning point in America's sympathies, and the president knew it.

"Next week, I shall ask the Congress of the United States to act ... to make a commitment it has not fully made in this century: The proposition that race has no place in American life or law," Kennedy said in a June address to the nation.

Kennedy wouldn't live to see it, but it was the beginning of King's desired second emancipation.