Accessibility links
Will Mad Men's Sixth Season Finally Bring Race Into The Picture? : Code Switch As Season 6 of Mad Men brings us at last to 1968, will the show tackle the racial turbulence of the time head-on, or will race merely remain an occasional catalyst for discomfort? 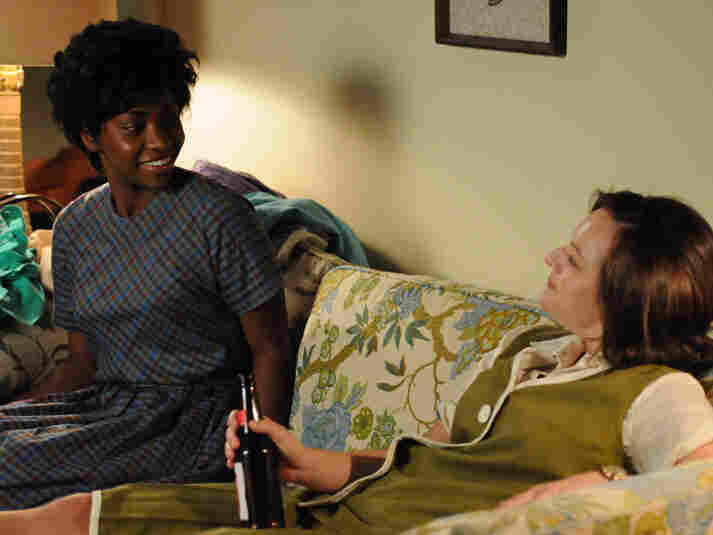 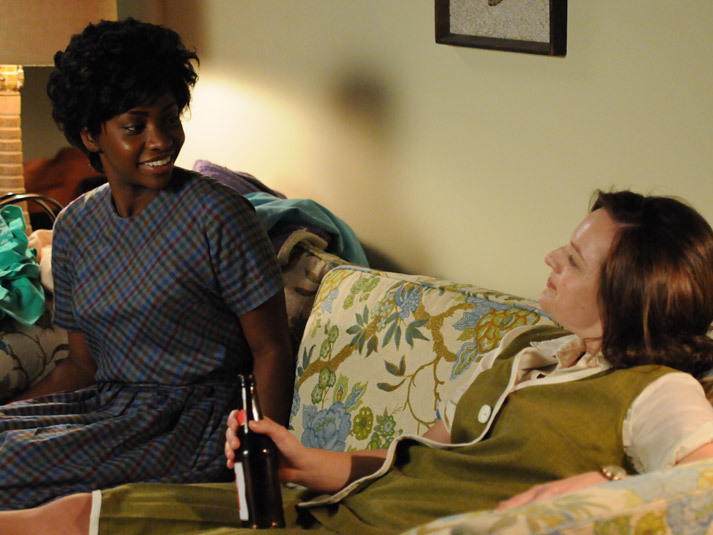 After an interminable wait, we were pretty amped for the return of AMC's "Mad Men" and its myriad vexing questions. Like: Is Megan exactly what Don needs or is she just slowing down his unraveling? Is Betty a soulless woman played expertly by January Jones or, uh, is that just January Jones? And can we please swap Pete Campbell with Sal Romano?

But what we're really curious about is whether this is the season when the racial turmoil of the 1960s finally intrudes on the lives of the folks at Sterling Cooper Draper Pryce. We've had peeks into the changing racial climes happening (sometimes literally) on the streets outside of the office. But for the most part, "Mad Men" takes place in a bricked-off, overwhelmingly white world.

Just to recap, here are some of the show's most memorable moments dealing with race:

(Any that we missed? Remind us in the comments.)

Opinions about race on the show basically fall somewhere between two poles. On one side, there are the folks who argue that the show's treatment of race is true to the world of "Mad Men," which is set in the interior lives of characters who don't have much meaningful contact with black folks. Plus, any of the treatments of race that we recounted above have been sensitive, subtle and served the characters well. The scene in which Lane turned away the black applicants , for example, nicely illustrated his fundamental uptightness. "It's a funny, uncomfortable moment, and one where the show sees Lane in a way he can't possibly clearly see himself," Alyssa Rosenberg wrote over at ThinkProgress.

On the other side, there are the people who say: but seriously, it's the '60s! You can't harbor this show's ambitions for societal comment and yet avoid that period's biggest, most consequential story. Race informed so many parts of American life; wouldn't even these colossally messed-up WASPS have felt the earth shifting beneath them? Couldn't a person of color be given something resembling an interior life? SCDP could take on a client that needs messaging for a pro- or anti-Civil Rights platform — they've had political types as clients before — which pushes folks to take sides. There's a lot of ways into this epic historical moment that wouldn't feel forced.

It's a debate the show's creator, Matt Weiner, has engaged on several occasions, and he's been vague about whether the show's world will always be so monochromatic. (Weiner is notoriously buttoned-up about what may or may not go down on his show.)

History gives Weiner a pretty solid cop-out. On "The Charlie Rose Show" last year, Weiner said that the whiteness of the show reflects the times, and pointed out that even now, Madison Avenue remains pretty white and pretty segregated. (Gayle King, who was guest-hosting "Rose," agreed with him.) Weiner then sort of patted himself on the back for not having the show be some kind of racial "wish fulfillment."

"I don't think people understand what that impact is, to have a world leader [In Martin Luther King], an international figure who is an African-American who is telling the truth and poetic — Don hears the speech, 'I Have A Dream,' and he turns off the radio," Weiner said. " It's just a news event [to him]. They don't even know. If I was telling a story of the black experience, it would be very different. But I'm very proud of the fact I'm not doing this guilty thing."

Tanner Colby, writing for Slate, echoed that sentiment, and said that everyone at SCDP was so busy fronting or trying to advance that they didn't have the psychic energy to be too forward-thinking about black people. "The success of the agency and everyone in it depends on pretending they belong to a social class that they don't, a class that in the 1960s did not include black people," Colby wrote. "That is why there are no black people on Mad Men."

But as Racialicious' Latoya Peterson pointed out, that class didn't include gay people either, and we still get some meaningful glimpses into the lives of several secondary and tertiary LGBTQ characters. "Most of the analysis of LGBTQ themes focuses on Salvatore, but there are other gay characters around the margins, who again, still have the ability to illuminate their condition," she wrote. "Remember Joan's roommate, the one who drunkenly confessed that she had done all she could to be near her? Joan politely downplays her request, and continues as if nothing was ever confessed."

Over the final two seasons of Mad Men, we'll be watching to see which way the show goes — whether the writers decide to wrestle with race forthrightly or whether they continue to deal with it as a grace note. We could make this a drinking game: if you're on #TeamGraceNote, take a swig everytime one of the show's tertiary characters of color reveals something insightful about our not-so-sainted central players. If you're on #TeamGoHard, take a swig whenever race is the fulcrum of genuine, plot-affecting conflict.

Oh, and if you're rewatching that scene with Dawn, Peggy and the purse, everyone should take a drink.

Fly your flag in the comments.