Accessibility links
Brad Paisley's 'Accidental Racist' Sparks At Least One Dialogue : Code Switch The song was an instant hit all over the Internet, though not (perhaps) the way its creators intended. 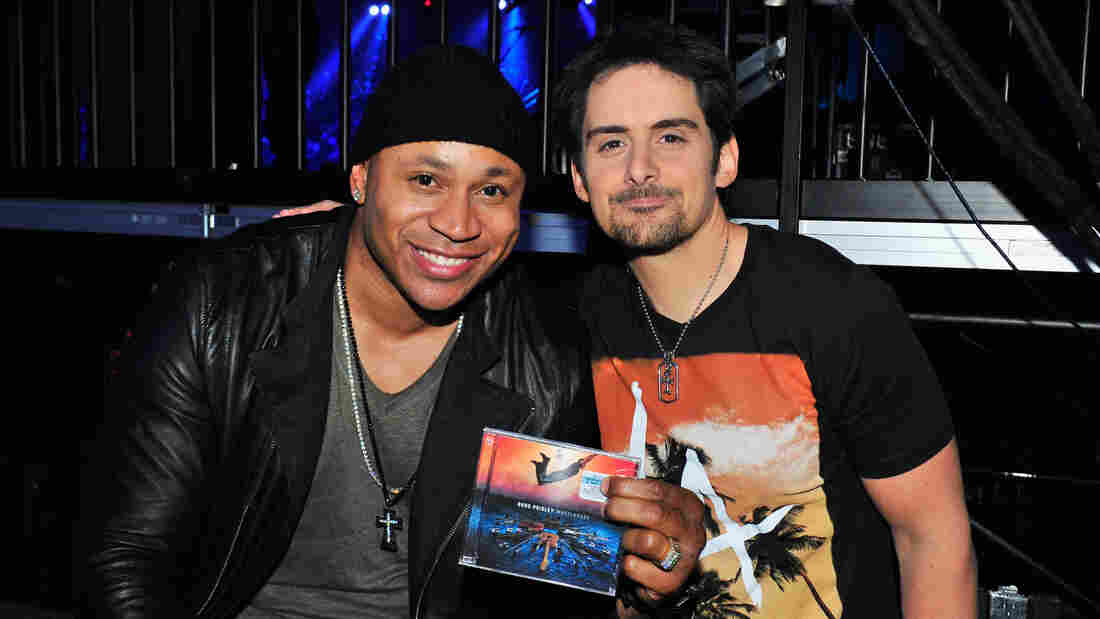 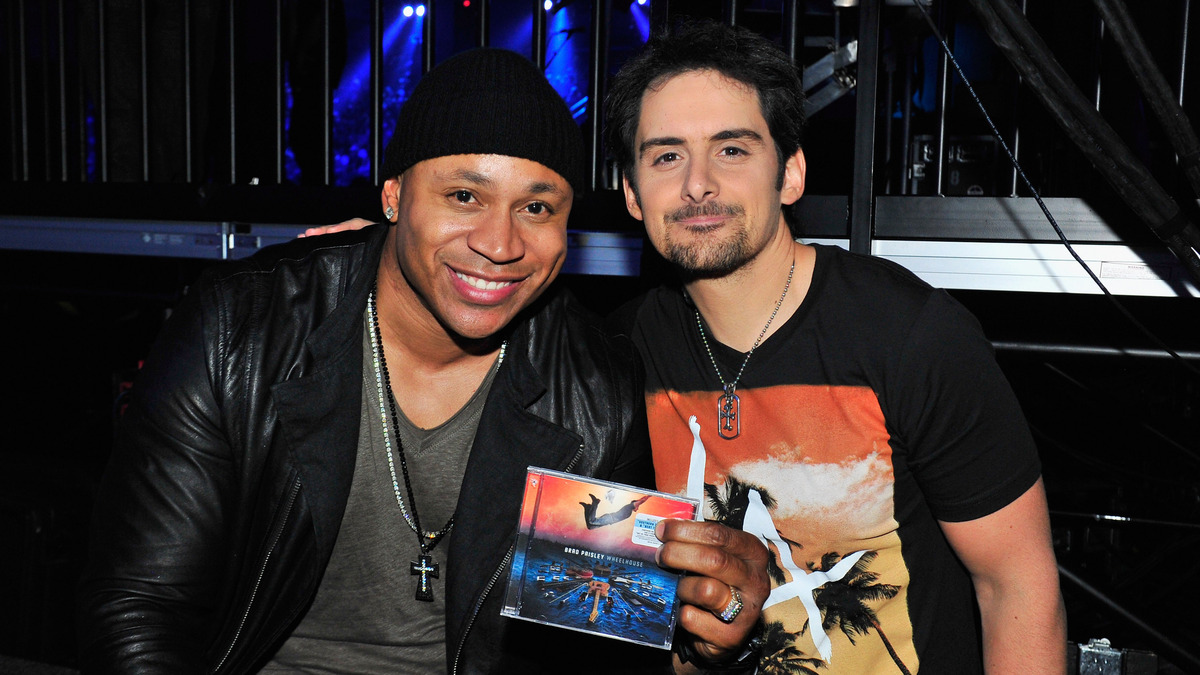 "It can't be a coincidence that 'Accidental Racist' came out the same day Code Switch launched," @Melanism tweeted at us on Monday.

And it did seem a little convenient. No sooner do we unveil our little race and ethnicity blog than Brad Paisley and LL Cool J release a hip-hop and country collaboration, asking whether black folks and white folks can come together and overlook each other's differences. We won't spend too much time on the song's racial politics, but you should probably know that LL Cool J's verse begins, "Dear Mr. White Man."

The Internet, as it is wont to do, went bananas.

Sometimes a piece of pop culture comes along that so captures the popular imagination that you're compelled to mull it over. And Paisley told USA Today that he intended the song to spark discussion. So in that spirit, here's a dialogue about "Accidental Racist" between Code Switch lead blogger Gene Demby and team leader Matt Thompson:

MT: Among my particular corner of the Internet, the predominant reaction to "Accidental Racist" seemed to be either impish delight — "I can't believe the Pop Culture Goddesses have given us such a masterwork of camp to heap our snark upon!" — or Southern politeness — "Um, they meant well." (Fellow Code Switch blogger Kat Chow distilled some of the main reactions for us in another post.)

Most folks, though, seemed to agree that it was at least a well-intentioned, if cringeworthy, gesture. Which we see a lot of in conversations about race, right? How does one respond to such a gesture?

GD: @Melanism was right, there's something suspicious about Code Switch launching the same day that the Internet discovered this tiny nugget of glory. It's kind of a softball over the plate. Can you think of another instance in which the Lost Cause made a bid for commercial radio play?

Luis Clemens, our editor, was pretty adamant that this was some kind of elaborate joke. "This is all an elaborate and knowing gag meant to provoke a real conversation about race unlike the pseudo-discussion in the song," he said. "Think of it as a Derridean act of derring-do."

But nope — Paisley and LL insist that it's the real thing. So if it's a well-intentioned mess, aren't their intentions a little dubious?

MT: There's probably a mix of intentions, at work, right? I mean, Mr. Paisley and Mr. Cool James had to know that there was going to be a reaction. A lot of reaction. You don't tread into 'Solve Racism' Land lightly. Paisley's tweet yesterday indicated as much.

So you can take it at face value, and many folks did: this is a serious effort to bridge cultures, to extend a hand and try to embrace someone else's humanity.

Of course, this is a commercial work as well as an insta-meme, so I know the question arose for some folks of whether the primary motive was publicity, which has certainly been achieved twice over, I think.

But all indications from his tweets and post-Monday appearances suggest that Paisley is for real.

GD: Regarding the "serious effort" bit, though: can music explicitly about building those bridges ever be effective at doing that? Every example that I can think of — Michael Jackson's "Black or White," Paul McCartney's "Ebony and Ivory" — is so cloying and earnest that they're hard to take seriously. How come we just can't kick it side-by-side like these piano keys?

I'll say this: this song is different from those in that it's at least trying to grapple with our nation's racial history, even if that history gets flattened into a bunch of false equivalencies. ("If you don't judge my gold chains/I'll forget the iron chains"? Yikes.) Those other songs were basically like: bump all that history noise, let's all of us go for some pizza!

This does not redeem the song, of course. But there's at least in "Accidental Racist" something to grapple with, to push back against or argue for. Granted, that's a pretty low bar.

MT: Whatever, "Black or White" was a work of genius.

Like "Ebony and Ivory," though, "Accidental Racist" does have the feature (or bug, depending on how you look at these things) of getting stuck in your head incredibly easily.

This issue of being an "accidental racist" is fodder for its fair share of discussions at places like Reddit (which is, as we know, the very best place on the internet to talk about race). Here's a thread on the worst incidents of accidental racism people have experienced or heard about, and here's another. Is there some value to having the perspective voiced, at least?

As Luis suggested, by releasing something earnest and kitschy enough to allow folks to laugh at it, are Paisley and LL giving us a slightly less tense on-ramp to talk about Things That Should Be Discussed?

GD: But it isn't less tense! Don't let those plaintive guitar strings get you all twisted up, Matt. LL is basically playing The Black Friend, buying into all of Paisley's premises, and absolving him of any kind of responsibility for rocking the Confederate flag, which is obviously an incredibly polarizing symbol. Paisley's all I wish people would stop tripping, I'm just trynna do me and represent. And LL's all Word, my friend! At the end of the day, aren't we all just trying to represent? Paisley was quoted in USA Today as saying, "It's real interesting to hear LL say, let's let bygones be bygones and the past is the past."

That's the most simplistic approach they could have taken to this subject matter.

MT: I agree that LL's role in this is pretty interesting. Could Paisley have done a track like this without having a black-person imprimatur?

GD: So look. LL is a hip-hop pioneer, and he's had one of the genre's longest, relevant careers.

But his prolonged moment in the sun has been dotted with just as many what-the-hell-is-LL-talking-about moments as it has been with signature lyrical moments. Remember, this is the same cat who once rapped that making love "is like pink cookies in a plastic bag being crushed by a building." He once told us that the brim of his baseball cap was like a shark's fin. (Uh, wrong direction, Cool James.)

And then there's the entirety of his infamous verse on the classic "Flava In Ya Ear (Remix)." Here's a sample:

Um damn, Hollis to Hollywood, but is he good?

LL's career has been important and he's still somewhat well-regarded. But he is so not above this kind of thing. This is definitely one of his periodic excursions into WTF-ness.

MT: Fair point. If you're an LL fan, you might either be mystified, delighted or unsurprised by this, given his discography.

I wonder how this song is playing among Paisley's fans? Our colleague Karen suspected he wasn't getting a lot of love from them on this one, but Kat definitely found plenty of folks standing by their man and standing down the haters on Twitter.

GD: I've seen an argument that goes: "If you" — "you" being black folks — " wear your X, I'll wear mine." The X they're referring to is from the Malcolm X paraphernalia that was everywhere in 1992, so apparently the people saying this haven't been outside since the Clinton administration. (That's also what's so funny about LL's "do-rag" line. Folks are still wearing those as fashion in 2013?)

Being a hip-hop fan kind of inures you to all kinds of Five Percent Nation jargon and iconography that's always floating around in the ether, even as a lot of it is confounding if not just outright noisome to folks. I wonder if the Confederate flag feels similar to Paisley, if he realizes how divisive a symbol it still is.

MT: We never really answered my original question — we have all probably been victims or perpetrators of possibly-clumsy-but-well-intentioned overtures, both related to our race or ethnicity and not. (Hair often factors into these, especially for black folks.) What's the best way to respond? I guess it depends on the context, of course, but is there any way to spin these gestures forward into a net positive for the world?

GD: A lot of people will probably say that this song has gotten people talking, and so that's an unalloyed good. But the kind of conversation it kicks off is what really matters. From what I've seen, most of the response has been composed of snark and eyerolls.

MT: My favorite possible outcome from this situation will be if "Accidental Racist" succeeds "Baby Got Back" as our ironic racial karaoke party jam for the ages. It's kind of a ballad, so it might bring down the room, but I am dying to try it. The very next time I go to a karaoke bar, I'm heading straight to the letter P in the "Songs By Artist" book, tipping the DJ, and getting my White-Man-From-The-Southland on.

GD: This song is begging for that treatment. It's physically impossible to recite LL's lyrics — "RIP Robert E. Lee but I've gotta thank Abraham Lincoln for freeing me, know what I mean" — with a straight face. And think of all the Django moments at the karaoke bar.

MT: If you start reciting lyrics to the song, this post will never end, Gene. I think Rembert Browne at Grantland took care of the lyrical exegesis.

You can find Gene Demby on Twitter at @GeeDee215. Matt Thompson tweets at @mthomps.