Accessibility links
Five Reasons Why People Code-Switch : Code Switch Pretty much everyone shifts between different languages or ways of speaking in different context. From hundreds of stories you sent us, here are some of the common motivations behind it. 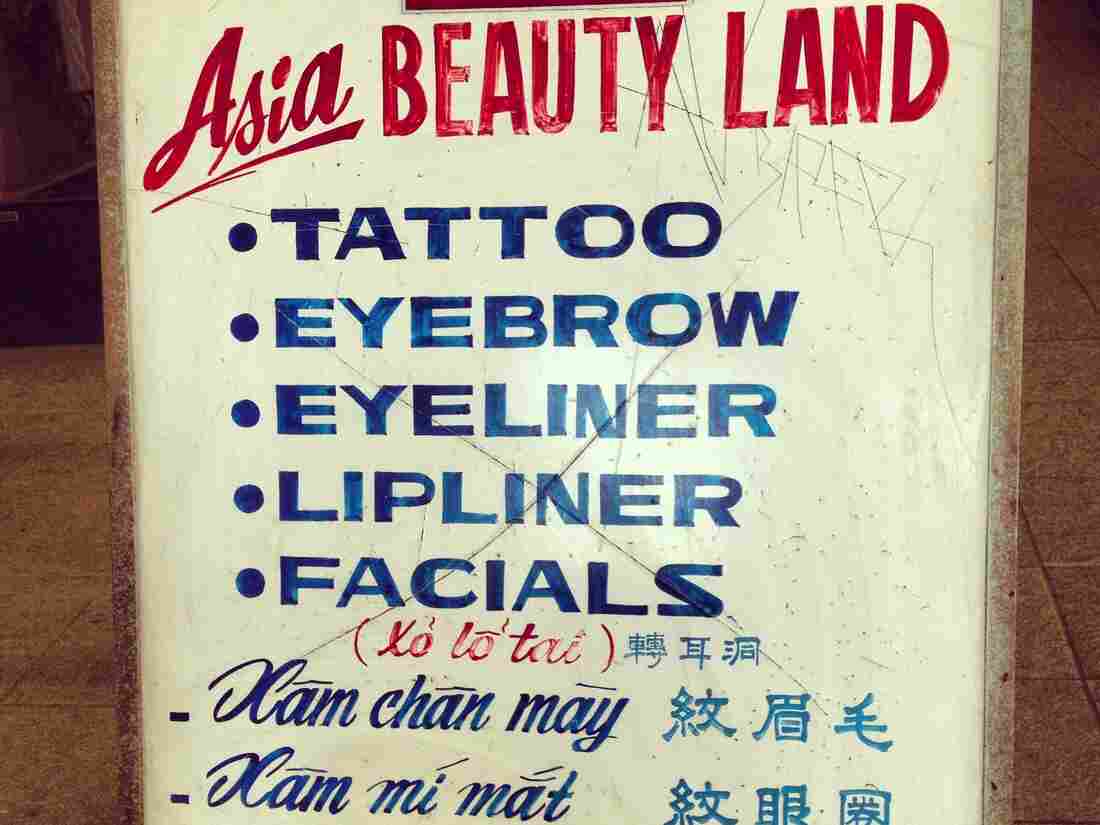 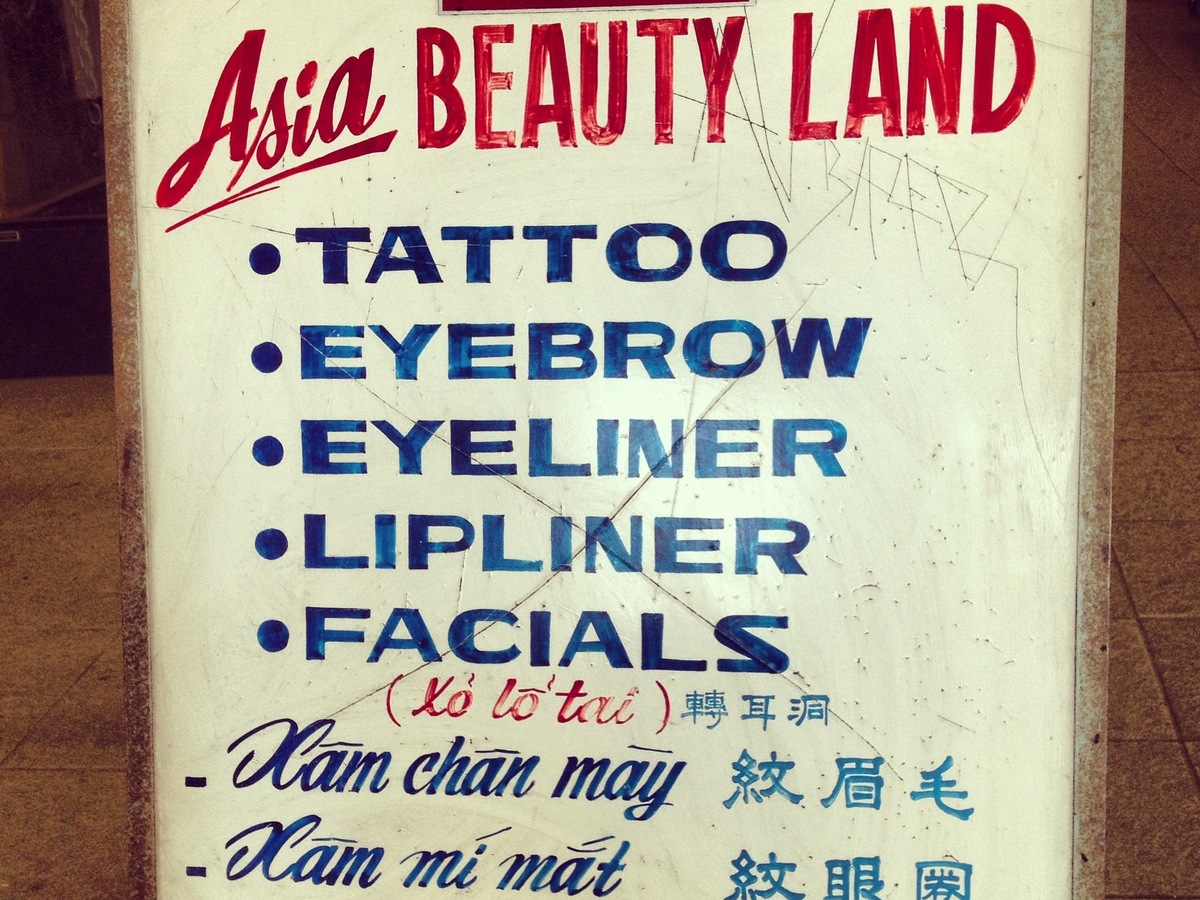 A sign in English, Chinese, and Vietnamese in Chinatown, Los Angeles.

Monday, April 8, marked the launch of Code Switch, our new blog covering race, ethnicity and culture. To commemorate the blog's launch, all week we solicited stories about code-switching — the practice of shifting the languages you use or the way you express yourself in your conversations.

People sent us hundreds of stories illustrating the many ways we code-switch and the many reasons for doing it. Five of those motivations came up again and again in the stories we read:

1) Our lizard brains take over: The most common examples of code-switching were completely inadvertent; folks would slip into a different language or accent without even realizing it or intending to do it. One such story came from Lisa Okamoto, who told us she was born and raised in Los Angeles by two parents from Japan, a place she's visited all her life. This trip was particularly memorable (warning, profanity euphemisms ahead):

If you ever watched the original Ring movie, I think you will understand this: the Japanese take horror stories pretty seriously, but in a very creepy quiet way. I find Japanese horror movies and haunted houses to be ten times scarier than the American counter-part.

I went back to Japan with a friend during the summer of 2009, the height of haunted house season in Japan. (The Japanese have this concept that the summertime is the best time to tell scary stories, because the chill you feel from fright will cool you down during the humid months.) My friend loves scary stories, and she wanted to go into a haunted maze when we were visiting Yokohama. I protested and protested but eventually she convinced me to go through the haunted maze, instead of making her go through it alone.

The premise of the haunted maze was the following: The setting was a haunted middle school, where a little girl named Mi-chan died a tragic death. She died so suddenly that she didn't properly enter the after world, and her spirit was still lingering at the school. You were supposed to go through this maze with an amulet, find Mi-chan, and place it on her so that she can properly enter the afterlife.

We were handed a flashlight and an amulet prop, and entered into the maze. I already knew I was getting myself into trouble, but I didn't expect how scary it was going to be. It was terrifying. Periodically, you would hear quiet scratches and taps on the walls of the maze, with a voice saying, "Watashi wa Mi-Chan" - translation: I am Mi-Chan.

I was talking in Japanese when entering the maze, but I started losing control because I was just so scared. Eventually, I started code-switch-screaming English profanities — "OH MY F-ING GOD, GET ME THE F OUT OF HERE!" — etc., etc. You can fill in the blanks with your imagination. I consider myself fully bilingual, but I realized at this moment that, when I'm in a fight or flight/survivor instinct situation, my mind switches to English. (This is probably because I've lived in the US all my life, and never lived in Japan.)

I was yelling and screaming in English throughout the whole maze, and still hearing the "watashi wa Mi-Chan" voice here and there. But suddenly the voice said, "Watashi wa Mi-Chan... watashi wa... I am... My name is Mi-Chan," in the most awkward, Japanese-accented English possible. The staff had taken such pity on my rude profanity-stricken fear that they also code-switched for me. When I heard that awkward English, I literally fell to the floor and cried and laughed at the same time. I was so scared, but the English took me by such surprise, and I felt the oddest combination of release.

2) We want to fit in: Very often, people code-switch — both consciously and unconsciously — to act or talk more like those around them. While this can be effective, it can also be perilous, as John Davis told us:

I am a Spanish teacher in a high-needs school in Nashville. I grew up in a homogenous town in rural Pennsylvania. Foreign languages came easily for me, so I majored in Spanish and minored in French at the University of Pittsburgh. When I moved to my school in Nashville, I had to learn another language: Southern, African American English. I entered my learning experience with fervor. My students taught me almost as much as I taught them in my first years. Now that I am well versed in the language, I have trouble code switching back to Standard American English.

One day my principal walked into my room and asked me, "Mr. Davis, I didn't receive your editions to the School Improvement Plan." I replied, "Nah, you flaugin' bruh, I put that on your desk yesterday." My boss froze, with his jaw dropped and one eyebrow raised. After a moment he shook his head and said, "you're spending too much time with the kids." "My bad."

In our pitch to users for stories about code-switching, we asked jokingly whether anyone learned Farsi to eavesdrop on their in-laws. And sure enough, in came this story from Amy Proulx:

Yes, I actually did secretly learn Farsi to snoop on the in-laws. I married an Iranian-Canadian, and after torturing myself trying to learn through the standard language tapes and computer programs, I sort of gave up, and instead, started watching Iranian soap operas. Oh the drama, the intrigue, the suspicion and suspense! What a way to learn Farsi, through the vice of sappy television.

My bad habit lead to good Farsi skills, but my handle on slang and colloquial language was the real kicker. When at a memorial ceremony for my late-father-in-law, I proceed to intone a rather dramatic, but reasonably common Shi'ite prayer (courtesy of my TV watching). My brother-in-law, in the middle of this most dramatic and somber moment, nearly fell over laughing. He declared that I proclaimed this Shi'ite prayer with perfect diction and pronunciation, and that I was a model of a perfect daughter and sister-in-law. I was in the in-crowd with the in-laws, thanks to soap operas.

3) We want to get something: A lot of folks code-switch not just to fit in, but to actively ingratiate themselves to others. We can not tell you how many dozens of stories we got from people who work in service industries who said that a Southern accent is a surefire way to get better tips and more sympathetic customers. Apparently everyone who works in a restaurant picks up "y'all" immediately upon arriving at their job. If you can pull off the right accent in the right context, you can get all kinds of favors, as this story from Patti Hollingshead illustrates:

We lived in Ireland some years ago and noticed there were often two prices for goods and services — reasonable prices for the locals and much more expensive costs for others (Americans). It was not easy, but I practiced my Irish accent until we qualified for 'local pricing'. Still, they would often ask me where I was from, as my accent was anything but flawless. But I'd come up with the name of some obscure town hundreds of miles away, which explained my 'odd' Irish accent and usually satisfied them. Once, to my, "Ack, I'm from dahn twards Clara Bog," the guy responded in Gaelic.

I had no idea what he was saying. I continued to smile, laugh, and nod at what I hoped were appropriate times as he excitedly talked on and on. Finally, another English speaking customer entered the shop and he flipped back to English then whispered to me, "We need to be careful here (in Northern Ireland) about speaking Irish." "Oh, aye," I replied.

I pulled my wallet out to pay for my my flowers and he held up his hands, "No, me lass, keep yer money. 'twas a pleasure speakin' to ya."

4) We want to say something in secret: We collected many sweet stories of people code-switching in order to hide in plain sight, a habit most common among people in love. Because this tactic often relies on assumptions, it can get one in trouble, as Veronica Rodriguez can attest:

I am from Venezuela and speak Spanish and English fluently and without an accent in either language. However, I look what most would describe as "Middle Eastern," this means that not only do people assume that I am from Turkey or Lebanon and try to speak to me in Farsi or Arabic and become very disappointed when I don't, but many times Hispanic people assume that I don't speak Spanish. This ultimately leads to someone speaking very candidly around me thinking that I cannot understand what they are saying.

I also speak French fluently enough to get myself into trouble. Living in Chicago during college I encountered lots of interesting people on the L. We often chose to comment on some of these people in French rather than English or Spanish since it was far less likely that someone would understand us. One rainy afternoon a very nice-looking man ran into the train, and my friend and I made some comments to each other in French about how handsome he was. To our surprise, he answered back, "Merçi!" — in perfect French.

Suffice to say,we were both extremely embarrassed and decided that maybe we would keep our comments to ourselves from then on.

5) It helps us convey a thought: Certain concepts need that perfectbon mot to come across effectively. Many people switch languages or employ colloquialisms to express particular ideas, as in this story from Jennifer Monahan:

I ... work in a bilingual school, and my coworkers and I code-switch constantly. Here ... code-switching centers around lexical gaps: Nonprofit fundraising is a very American idea, so the French speakers tend to switch to English when that's the topic. Same with technology; if I learned about a piece of equipment or software in English I have a hard time discussing it in French. It's not just a language proficiency issue, my coworkers who are native French speakers follow the same pattern. So we tend to talk about "le smartboard" or "un programme de planned giving." And some concepts just don't translate. French kids eat lunch in the school cafeteria; the notion of bringing lunch from home is, well, foreign. So is the notion of having a designated container to bring your lunch from home. So we all refer to "le lunchbox."

The reasons people code-switch and the ways in which they do it are far more numerous than the few examples we've listed here. While many people told us they code-switched to fit in, for example, several also told us they did it to stand out. What the stories reiterated most of all, though, is what our colleague Gene Demby pointed out in his inaugural post: No matter your race, ethnicity, class or cultural background, you probably do it.