Accessibility links
Seeking Oakland's Soul In The 'New Oakland' : Code Switch Oakland, Calif., was a hub of African-American life on the West Coast. Today, it's one of the most diverse cities in the country. How has that shift affected its culture? 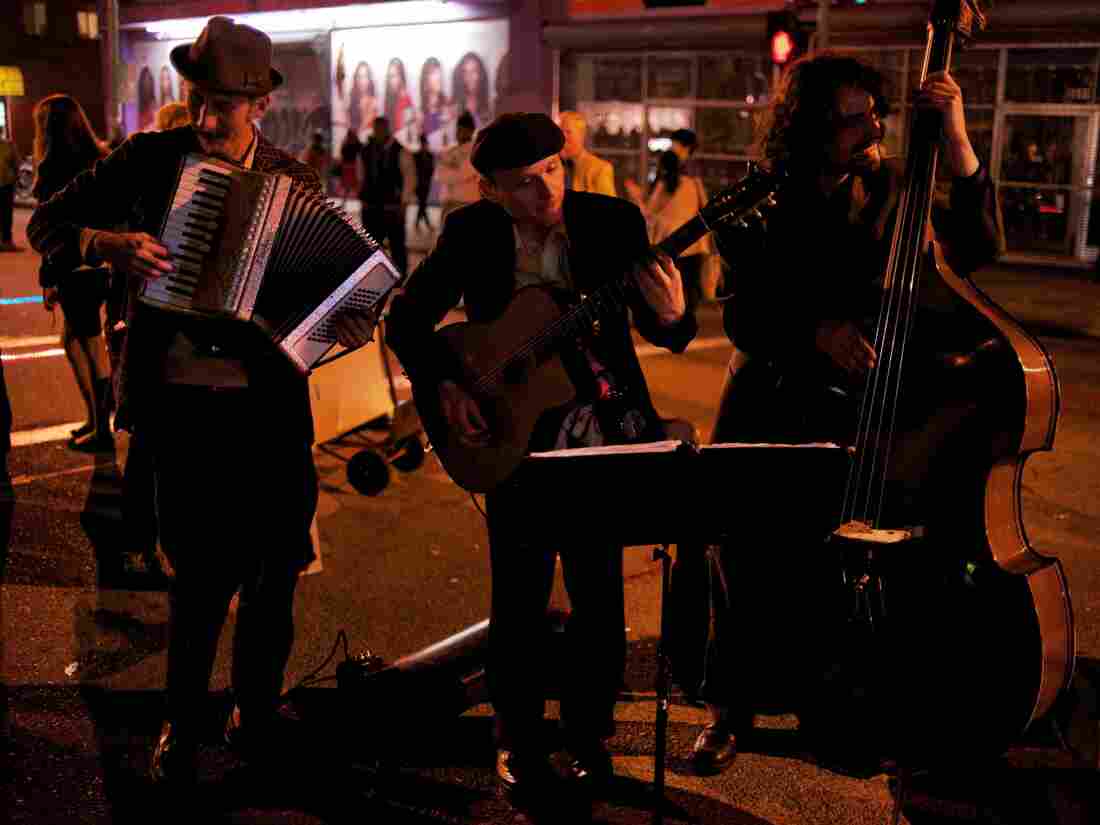 Ten years ago, you wouldn't have seen a sight like this — three white guys playing old-timey music — on the streets of downtown Oakland on a Friday night. Shereen Marisol Meraji hide caption 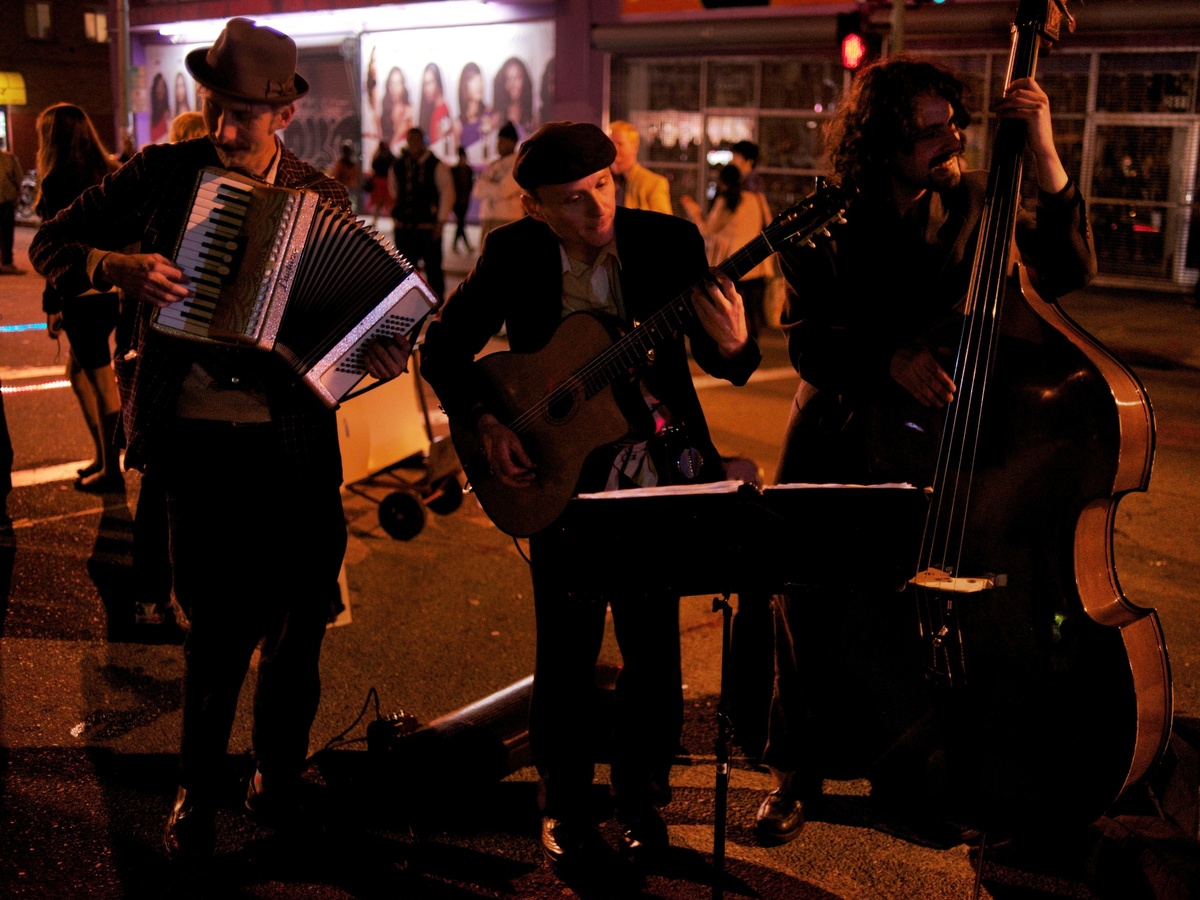 Ten years ago, you wouldn't have seen a sight like this — three white guys playing old-timey music — on the streets of downtown Oakland on a Friday night.

Oakland, Calif., was once a hub of African-American culture on the West Coast.

In the 1940s and '50s, Oakland was home to an entertainment corridor nicknamed The Harlem of the West. In the '60s, the city gave birth to the Black Panther Party. By the '80s, black folks made up nearly half of Oakland's population.

Today, Oakland is one of the most diverse metropolitan areas in the U.S. — it's now 34 percent white, 28 percent black, 25 percent Latino and 17 percent Asian. But some worry that diversity will dilute the city's black cultural identity.

This is an issue affecting cities across the country. Atlanta, Washington, D.C., and Newark, N.J., have all seen their black populations decline.

When I lived here 10 years ago, I never would have expected to find what I did in Oakland in March — a trio of mustachioed white guys playing old-timey music smack in the middle of Telegraph Avenue on a Friday night.

But, now? That kind of thing goes down on the first Friday of every month. Which is where I was, walking with hordes of people, eating food truck grub, popping in and out of hip bars and art galleries. 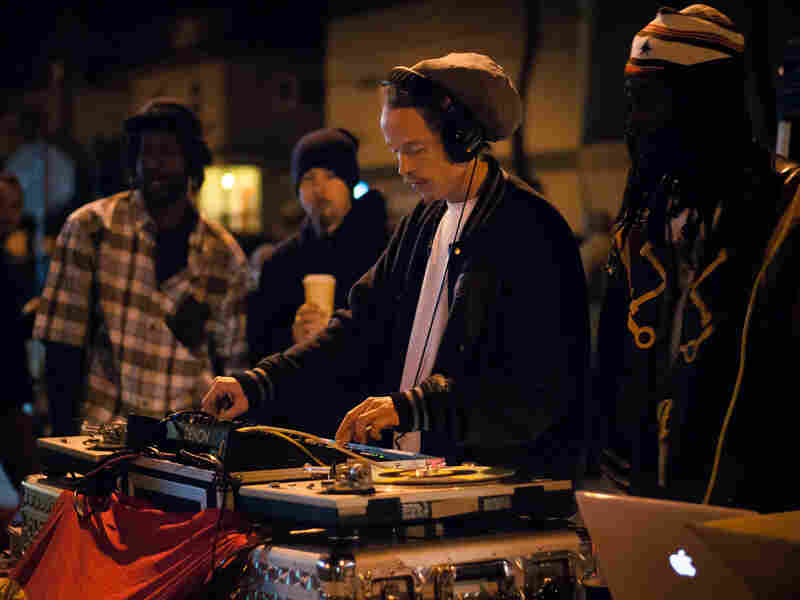 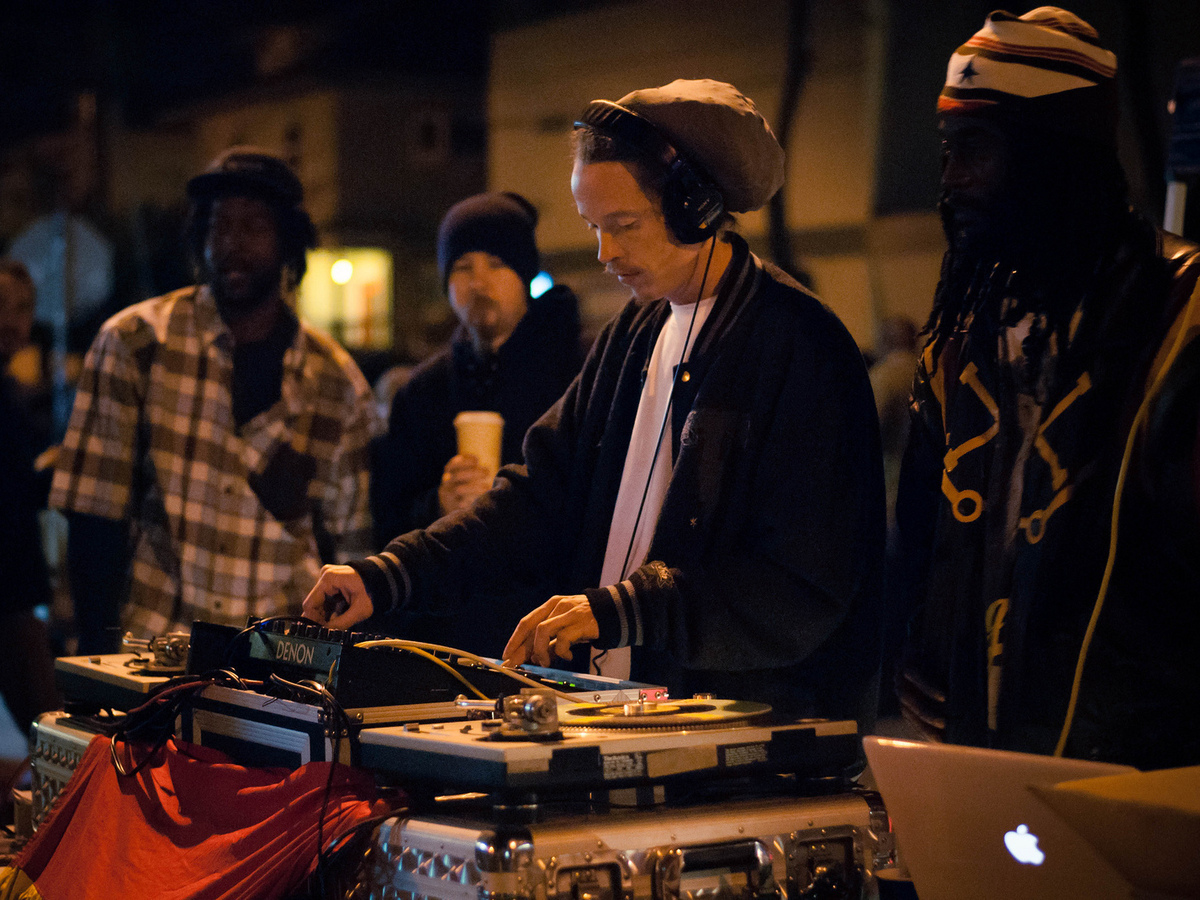 A DJ plays for a crowded street at Oakland's Art Murmur celebration in February.

This event, known as "First Fridays" or "Art Murmur," takes place in a part of Oakland that once was called Downtown. But after redevelopment, it's now Uptown.

"This is very new Oakland," said Chris Riggins, who performs stand-up comedy at Art Murmur every month. "But the only issue we're having right now is getting new Oakland to accept old Oakland."

Riggins explained: "When I say 'Old Oakland,' what I mean is really the people that were born and raised here, that often get forgotten. And that's basically black and brown people in Oakland. Because right now we're having a big gentrification, [and] a lot of people that aren't from Oakland — that wouldn't come to Oakland 10 years ago — are moving to Oakland."

And the people from old Oakland? They're moving out. Parts of Oakland that were affordable are being revitalized. Gentrified. People are leaving neighboring San Francisco because the rents are crazy high. That's pushing Oakland's rents up.

But violence is also up. The murder rate here jumped 22 percent last year.

Everything stopped for a moment at March's First Friday to honor Kiante Campbell, an 18-year-old student shot and killed the previous month. Three-quarters of the murder victims in Oakland are black, like Kiante.

Those two factors — higher rents and crime — are triggers for the nearly 25 percent drop in Oakland's black population over the past two decades.

Dave "Sweets" Ward is one of the black Oakland natives planning his suburban escape. He doesn't want to raise his daughter around all that shooting.

Ward's dad, "Sweet Jimmie" Ward, was one of the most successful bar and nightclub owners in Oakland for decades. "Let's say Michael Jackson is the king of pop — let's just say Sweet Jimmie is the king of the nightlife," said his son.

Sweet Jimmie reigned over Oakland nightlife until 2006, when he sold Jimmies, one of Oakland's largest black-owned-and-operated clubs. (He has since passed away.)

"I mean, he owned the building, the property — he owned it," Ward said. "No renting, no leasing, all his."

Sweet Jimmie came from Louisiana in the mid-'50s to work as a longshoreman. Many African-Americans in Oakland have ancestors who moved from the South to work in the shipyards.

Longshoreman by day, bartender at night, Sweet Jimmie opened his first bar in 1969 on Telegraph Avenue. Back then, Jimmie's patrons nodded their Afros and nursed cocktails while they listened to blues greats like Bobby "Blue" Bland.

Black Panthers and the blues: You can't get more old Oakland than that. But when I asked Dave Ward what his dad, Sweet Jimmie, would say about Uptown Oakland in 2013, Ward said, "He couldn't say nothing but that it's beautiful ... but ... it ain't for black folks."

Today, on the former site of Sweet Jimmie's, sits a place called the New Parish, with a crowd that looks very new Oakland: white, Latino, Asian and black, but a lot less black than the city used to be.

The club's owner, Michael O'Connor, is a San Francisco native with Irish roots. O'Connor said Sweet Jimmie's building was empty for a couple of years before he bought and remodeled it. Old Oakland now houses new Oakland. He hopes the two can co-exist.

"If we want to have a successful Oakland, it's got to be diversified," he said, "but I think that there still and hopefully there will be always a dominant thread going through that fabric of African-American and black culture."

O'Connor said Oakland has the potential to maintain its strong diverse identity — something San Francisco lost. He says it helps that what he calls "identity politics" are no longer en vogue.

"We went through a period of time in the '90s where there was a lot of white guilt," he said. "I think that all races can over-analyze what they are and who they are — 'I'm this and I'm going to teach you a lesson,' or 'I'm this and I feel guilty because of history.' But when you're out at a show on a Friday night, those things aren't that relevant."

I spoke with Oakland natives born in the '90s who never knew there was a Sweet Jimmie, don't know much about the Black Panthers or the blues, and don't really think of Oakland as having a black cultural identity.

It's just not that relevant to folks such as Antoinette Allen, a high school senior.

Antoinette is black, and her new favorite jam is an R&B song by a group of Pacific Islanders raised in Oakland. The song's video was filmed on Oakland's International Boulevard. The vocalists croon to their love interest in front of a Taco truck called Tacos Los Amigos:

This is Oakland in 2013. Some say it's the heart of multicultural America; others tell me it's losing its soul.

But whatever it is, it's changing fast.