Accessibility links
Ethnicity, Religion And The Tsarnaev Brothers : Code Switch Much of the chatter around the Boston Marathon bombings has been concerned with the Tsarnaev brothers ethnic background and its possible implications. 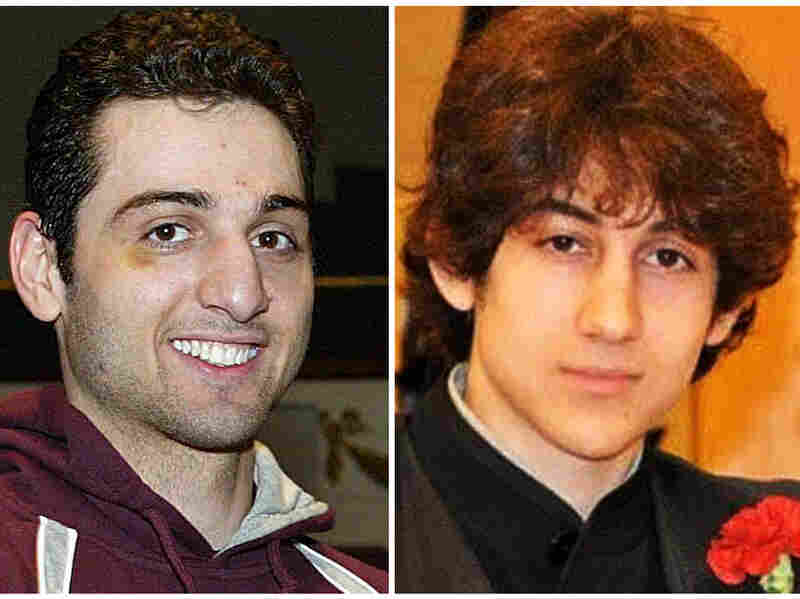 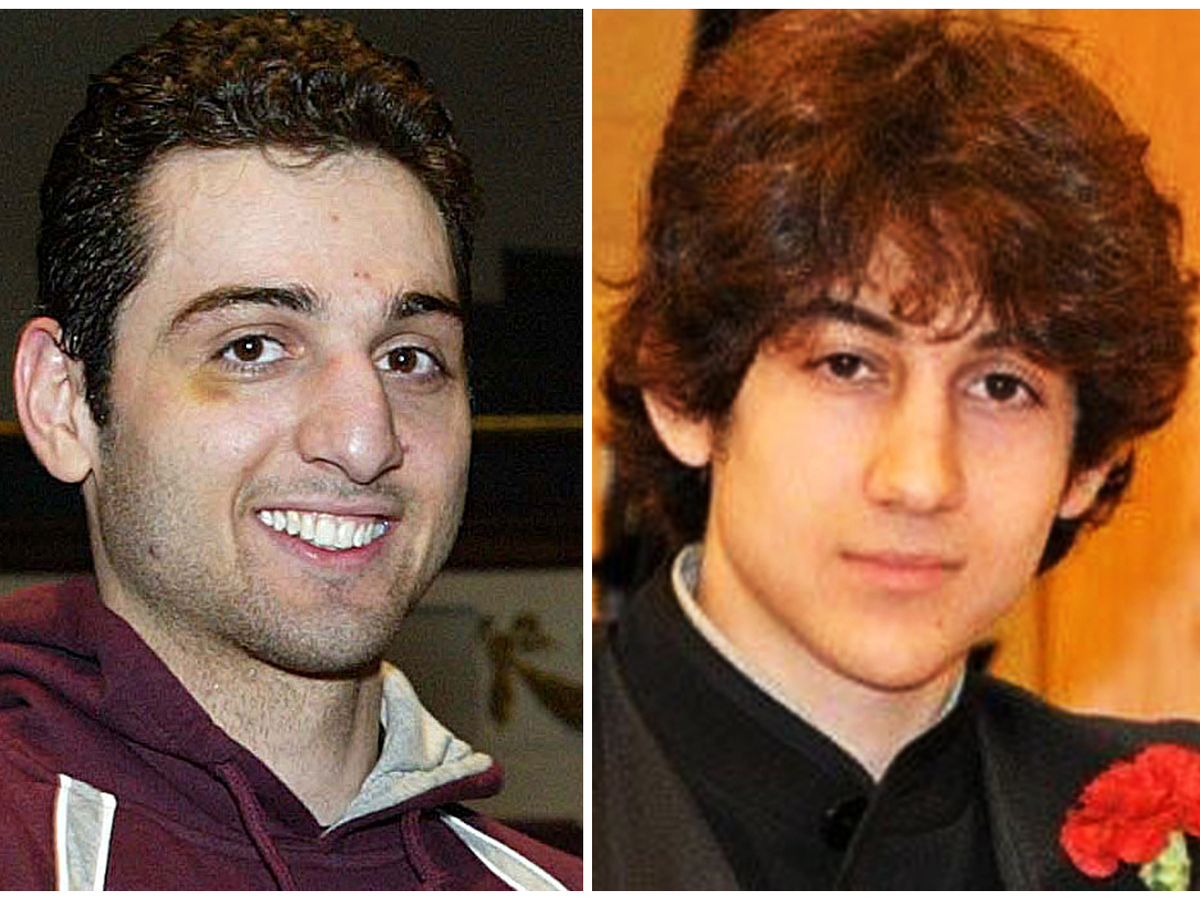 This combination of undated photos shows Tamerlan Tsarnaev, 26, left, and Dzhokhar Tsarnaev, 19. The FBI says the two brothers and suspects in the Boston Marathon bombing.

A week after the marathon bombings in Boston, we're still trying to make sense of just what motivated the Tsarnaev brothers, the two suspects in the attacks.

One big question that's been central to a lot of conversations we keep seeing: just what race do the Tsarnaev brothers belong to? Joan Walsh at Salon writes that if we use the rubric of the U.S. Census, then the pair, of Chechen descent, are white.

These days, though, Americans of Russian or Chechen descent are unambiguously categorized as "white" by the U.S. Census Bureau, which says it counts as white all "people having origins in any of the original peoples of Europe, the Middle East, or North Africa. It includes people who reported 'White' or wrote in entries such as Irish, German, Italian, Lebanese, Near Easterner, Arab, or Polish." As I wrote Friday, the anguished outburst of Ruslan Tsarni, the brothers' uncle in Maryland, was the quintessentially American cry of a newcomer wanting to be identified as a good, patriotic American – not necessarily as white, but certainly not as suspicious "other."

But the historian Jelani Cobb, writing at the New Yorker, says that their uncle's expression of collective guilt — that the Tsarnaev brothers' alleged actions had brought shame to Chechens everywhere — was an acknowledgment that few Americans would view the Tsarnaev's actions in isolation.

According to the most recent available data, only five hundred and ninety-six people identified themselves as being of North Caucasus origins on the 2000 census. But a casual glance at the front page of the New York Post, not to mention the immediate presumption of guilt directed at a Saudi national, himself a victim of the blast, confirms the bleak logic of Ruslan Tsarni's thinking. There's a pragmatic understanding that even if one doesn't feel guilty for the actions of random individuals with whom you happen to share pigment or faith or language there are surely outsiders who will assign it to you nonetheless.

The anthropologist Sarah Kendzior wrote that a lack of familiarity with Chechens or the Caucasus region didn't prevent people in the news media from creating scary stories about them out of whole cloth.

Knowing nothing of the Tsarnaevs' motives, and little about Chechens, the American media tore into Wikipedia and came back with stereotypes. The Tsarnaevs were stripped of their 21st century American life and became symbols of a distant land, forever frozen in time. Journalist Eliza Shapiro proclaimed that Tamerlan Tsarnaev was "named after a brutal warlord", despite the fact that Tamerlan, or Timur, is an ordinary first name in the Caucasus and Central Asia. Her claim is equivalent to saying a child named Nicholas must be named in honour of ruthless Russian tsar Nicholas I - an irony apparently lost on New York Times columnist Nicholas Kristof, who made a similar denouncement on Twitter (to his credit, Kristof quickly retracted the comment).

That fear of being assigned blame was an immediate concern of Haider Javed Warraich, a doctor of South Asian descent who was near the site of the explosions last Monday. (Some early erroneous news reports described a suspect in the attacks as a "darker skinned male.")

As a 20-something Pakistani male with dark stubble (an ode more to my hectic schedule as a resident in the intensive-care unit than to any aesthetic or ideology), would I not fit the bill? I know I look like Hollywood's favorite post-cold-war movie villain. I've had plenty of experience getting intimately frisked at airports. Was it advisable to go back to pick up my friend's camera that he had forgotten in his child's stroller in the mall? I remember feeling grateful that I wasn't wearing a backpack, which I imagined might look suspicious. My mind wandered to when I would be working in the intensive care unit the next day, possibly taking care of victims of the blast. What would I tell them when they asked where I was from (a question I am often posed)? Wouldn't it be easier to just tell people I was from India or Bangladesh?

The playwright Wajahat Ali writes that he feels no compulsion or desire to apologize for the actions of the Tsarnaev brothers, with whom he shares a broad, diverse faith.

The Tsarnaev brothers' criminal and perverse actions do not speak for me or the overwhelming majority of Muslims. I am not compelled to apologize for them or explain their actions. Muslims are not a monolithic, Borg-like collective, who possess a shared consciousness, specializing in counterterrorism knowledge with a telepathic understanding of the perverse mind-set of radicals in their "community." This is like asking Republican Christians to apologize for Timothy McVeigh or expecting young white males to explain why individuals like Adam Lanza, Jared Loughner and James Holmes used assault rifles to unleash terror on innocent civilians.

Meanwhile, Andy Rosenthal at the New York Times suggests that the debate over the legal logistics of dealing with Dzhokar Tsarnaev — debating whether to Mirandize him or label him an enemy combatant — is wrapped up in what he says is our legal system's very different approach to violence perpetrated by Muslims.

The federal government managed to hunt down, arrest, charge, try, convict and execute Timothy McVeigh without junking due process...

But now Senator Lindsey Graham is calling for Dzhokhar Tsarnaev to be classified as an enemy combatant and "held and questioned under the law of war," without a lawyer.

What's the difference? The Boston Marathon bombings are closer to the colloquial and legal definitions of terrorism than the Aurora shooting, but not the Oklahoma bombing, or the Arizona attack.

The real difference is that Mr. Tsarnaev is a Muslim, and the United States has since the 9/11 terrorist attacks constructed a separate and profoundly unequal system of detention and punishment that essentially applies only to Muslims.

Mr. Graham and others who are demanding that prosecutors treat Mr. Tsarnaev differently from Mr. McVeigh are not even trying very hard to disguise the fact that they're drawing distinctions based on religion and ethnicity.