Accessibility links
Deferred Action: A Bird In Hand For Young Immigrants : Code Switch An overhaul of the country's immigration laws by Congress is not yet a done deal. One change already in place prevents the deportation of young adults brought to the country illegally as children. 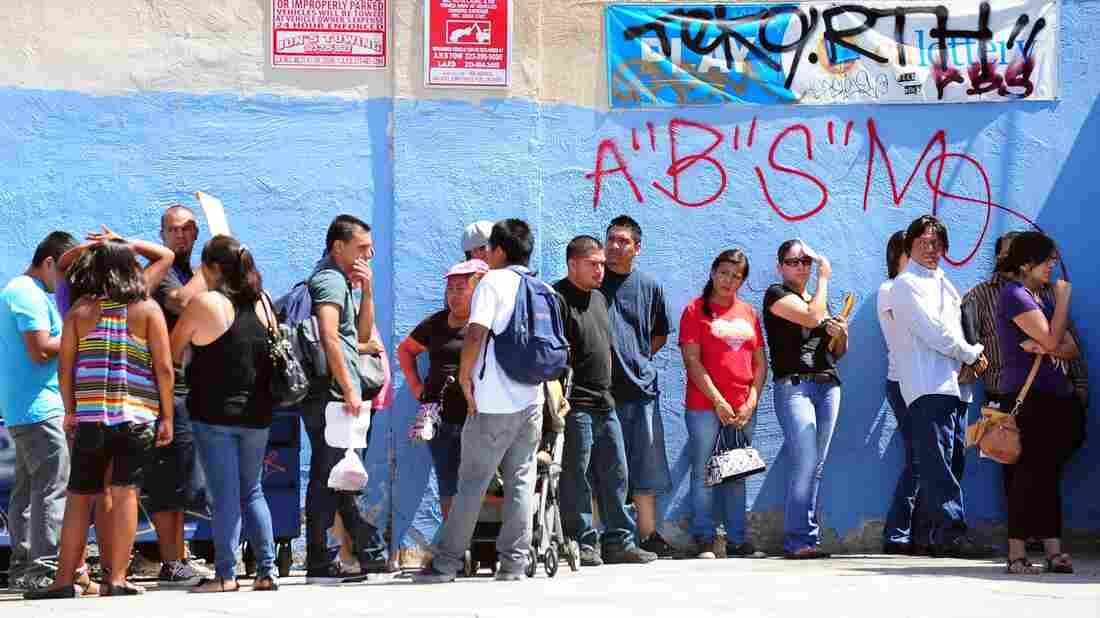 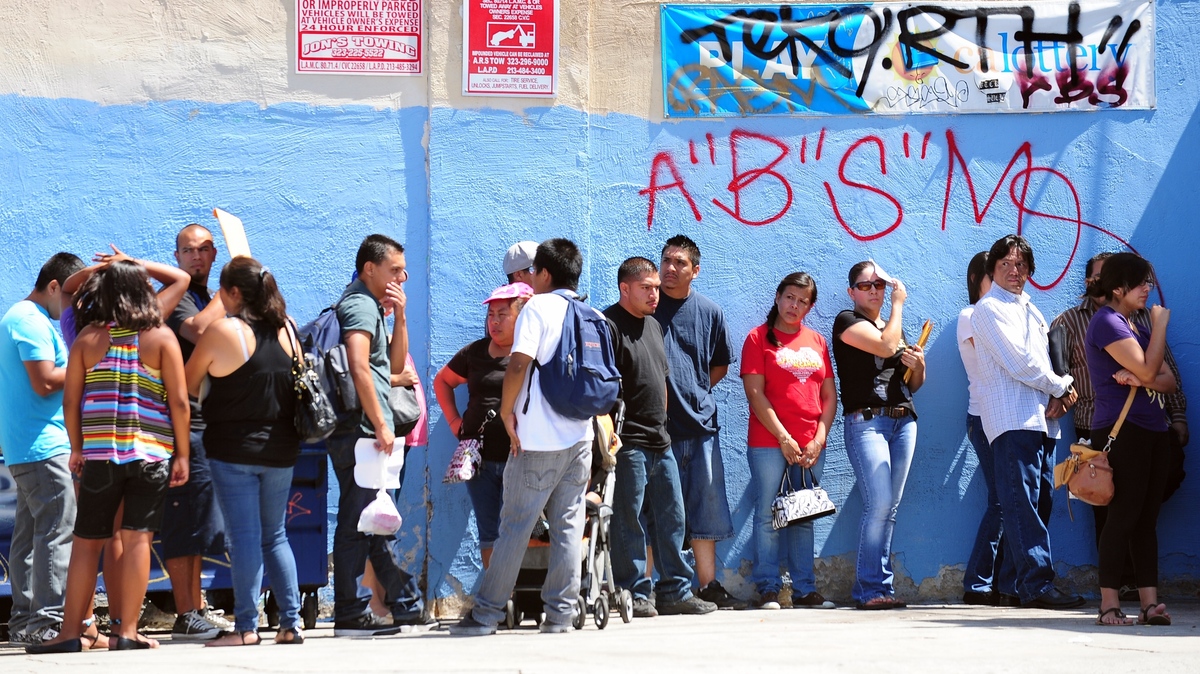 Young people wait in line to enter the Coalition for Humane Immigrant Rights of Los Angeles office on the first day of the Deferred Action for Childhood Arrivals program in August.

As Congress continues its debate over immigration reform, nearly a half-million young people who are in the U.S. illegally have already applied for deferred action.

The Obama administration started the policy, formally known as Deferred Action for Childhood Arrivals, last year for people who were brought into the U.S. illegally as children. Those who are approved gain the right to work or study and avoid deportation for two years.

Still, of the estimated 1.7 million undocumented youths who are believed to be eligible, more than a million have yet to apply for deferred action.

Marlen Florentino, 23, just submitted her application in March. Unemployed and raising two young sons, she decided to first enroll in a GED program at a community college near her home in Reston, Va., in order to meet education requirements.

Florentino admits she was wary of applying for deferred action when she first heard about the program. After seeing her cousins apply without repercussions on their undocumented family members, she decided it was finally safe to acknowledge to the federal government that her family illegally brought her to the U.S. from Mexico when she was 8 years old.

A former hotel housekeeper, Florentino hopes that receiving deferred action status, along with the accompanying work permit, will ultimately lead to a better job.

"Not having any type of documents or anything like that, you don't get paid as much. Sometimes you can't even find a job," she says.

Asking The Government For 'A Favor'

Deferred Action for Childhood Arrivals, also known as DACA, was created through executive action by President Obama last year, partly in response to the failure to get immigration reform through Congress during his first term.

More than a quarter of a million immigrants ages 15 to 30 have been approved for deferred action since the program began last August, according to the latest figures from U.S. Citizenship and Immigration Services. Another 200,000 or so have applied and are waiting for the government's response.

Laura Lichter, president of the American Immigration Lawyers Association, says it's important to remember that deferred action is not a path toward citizenship or even a green card under current law.

"In essence, you're asking the government for a favor," Lichter says.

In other words, deferred action is a way for undocumented youths to ask the government for a pass from deportation because they arrived in the U.S. illegally as children and have not been convicted of any major crimes.

"With 11 million people in the country without status, the government needs to prioritize where it's spending its enforcement dollars," says Lichter, who adds that in a way, applicants for deferred action are doing a favor for the government, too.

Still, opponents of deferred action have criticized the Obama administration for bypassing Congress to enact the policy.

The Bird In Hand

So far, the majority of eligible undocumented youths have yet to apply for deferred action.

Coming up with the $465 fee to pay for the work permit and fingerprinting requirements might be an obstacle for many, not to mention the difficulty for applicants with interrupted schooling of compiling documents that prove continuous residence in the U.S. since 2007.

For some, even filling out the application form can be hard. Lichter says seemingly straightforward questions such as "When did you come into the U.S.?" and "How did you come in?" may be difficult to answer for deferred action applicants who were too young to remember.

Still, Lichter sees the deferred action program as a clear success. Less clear is what's ahead in the immigration reform debate in Congress. In the meantime, Lichter says, her immigrant clients are watching and waiting.

"People are excited about the possibility for immigration reform," she explains, "but they're not naive."

Better the bird in hand, Lichter says, and for many undocumented youth, that's still deferred action.

In the audio of this story, as in a previous Web version, we incorrectly describe the Deferred Action for Childhood Arrivals program as resulting from an executive order. It was actually created through executive action.