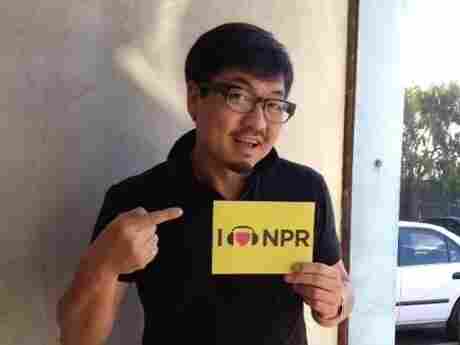 Filmmaker Benson Lee believes that on the quest for success in America, comparatively speaking, "Asians have done pretty well."

"They have the highest income [and] spend the most money on entertainment," Lee says.

But, he says, there's one drawback: "They're the least satisfied with their image in the media."

Lee, born in Toronto and raised in Philadelphia, remembers growing up and loving the films by director John Hughes — the Breakfast Club, Pretty in Pink, Sixteen Candles. "I really connected [to them] as a kid," he says. "But there was a certain aspect of those films I hated, which was always the Asian-American characters."

Yeah, the accent. The geekiness, the can't-get-a-girl ineptitude? All those things still rankle. (One of the most famous — and despised — lines? "No more yanky my wanky!")

That acute discomfort was partially the catalyst for Benson Lee's career. He wanted to expand the view of how Asians are seen — and how they see themselves. So after making a successful documentary on Korean B-Boys (break dancers) and a couple of independent features, he's making a feature-length film about finding his Korean identity at summer camp.

As with the Hughes films Lee so liked, Seoul Searching involves adolescence and all the issues teens encounter as they evolve into adults. It's a sweet coming-of-age story with universal themes — identity discovery, falling in love, etc. But unlike other coming-of-age films, Seoul Searching focuses entirely on Korean kids. Their common denominator? They've all been sent to the same summer camp in Seoul by their parents. The goal? To immerse the teens in their ancestors' history and customs. And they came from various parts of the globe.

That summer in camp — it was 1986 — broadened Lee's image of Koreans. "Camp was actually the first time I was introduced to the world with Korean faces," he says.

Benson Lee has posted a big callout on Facebook for virtual auditions. Casting remains open for the time being, but will probably close soon. Once chosen, cast members will spend the summer filming in Korea.

Lee is doing this because he loves film — and because he wants to, finally, avenge his teenage self that winced every time Long Duk Dong appeared on screen. So Seoul Searching will reflect the gamut of kids he encountered at camp — stoners from the States, Korean Germans with ambitions for an elite position in government, Brazilian playboys and Madonna wannabes. Lee says they're all legitimate reflections of who Koreans are. He especially wants younger Koreans to know there is life beyond some of the unfortunate stereotypes they've witnessed in the media.

"When I was young, it would have meant the world to me just to see a character that I could relate to," Lee says, "because the danger of media is that when you're confined to a stereotype, it invalidates you."