Accessibility links
A Family's Agony Intersects With A National Tragedy : Code Switch Authorities have identified the body of Sunil Tripathi, a missing Brown University student who was erroneously implicated on social media in the Boston Marathon attacks. 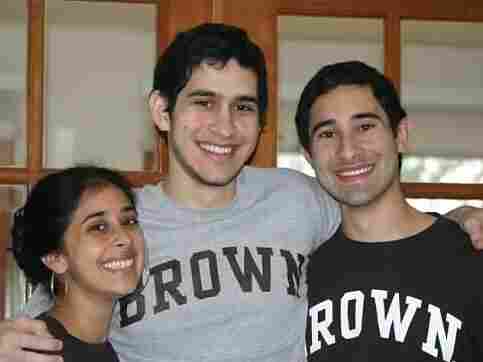 Sangeeta (from left), Sunil and Ravi Tripathi. Sunil had been missing since March, and rumors on social media had erroneously implicated him in last week's Boston Marathon bombings. The Tripathi Family hide caption

Today the body was identified as that of Sunil Tripathi, a missing Brown University student who for a few hours was erroneously identified on social media sites as one of the suspects in the Boston Marathon bombings.

"As these days have shown us, the media is a powerful tool to be used carefully," the family said in a statement. "We hope you continue to exercise caution and treat human lives with delicacy."

It was a little over a month ago that Sangeeta Tripathi got word that her youngest brother, who the family called Sunny, was missing. Sunil's best friend had spoken to him on a Friday night, but she'd been unable to get in touch with him over the next day, which worried her. So she went to his apartment, and when his housemates finally arrived to let her in, they found that his wallet and phone were in his bedroom.

Sunil's parents and siblings, based in suburban Philadelphia, all headed to Providence. Sangeeta and Sunil's brother, Ravi, had also gone to Brown, and so they were already familiar with the area. The family fanned out across town to look for Sunil.

"It was a very cold and very dark night, and the world just felt really, really big," Sangeeta said Tuesday of that first night in late March. She worried for her brother, who hated the cold and wore multiple jackets everywhere.

The Tripathis stayed with a family friend and set up their base of operations: Each morning, they would gather to consult a to-do list and divvy up the responsibilities for the search for Sunil. They slept three or four to a bed and did what they could to bolster each others' spirits.

"We've been trying to keep the momentum, both the emotional momentum and the actual momentum. But every day it's getting harder and harder. It's been really hard watching your parents and not being able to take care of them," Sangeeta told Code Switch before Sunil's body was discovered.

From the beginning, the Tripathis made social media a big part of their search strategy. To get the word out, they set up a Facebook page, which included downloadable fliers with Sunil's picture. Sangeeta said that in the first week, the Facebook page garnered 250,000 page views.

But last week, the tenor of the comments began to change from being supportive to vitriolic. And soon the family was inundated with calls about Sunil's possible involvement in the Boston Marathon bombings. Alexis Madrigal, who covers technology for The Atlantic, told NPR's Steve Henn on Tuesday how the rumors about Sunil being a terrorist got started. "People at, not just at reddit but at 4chan and other Internet forums, decided that they could help with the investigation by taking all the photos that had come out of the bombing, combing through them and looking for — I'm sort of air-quoting here — suspicious characters. People carrying backpacks, people who might look like a terrorist," Madrigal says.

A Twitter user who had been listening to the Boston Police Department's scanner suggested that Sunil was one of the bombers, even though his name was never mentioned by any police on the scanner. Sunil's name became a trending topic on Twitter.

The Tripathis asked the police what they should do, and police advised the Tripathis to do what they thought best, but cautioned them that they would be drowned out. "Their comment was based on past experience, was that a family will never get in front of it, just of because how media works," Sangeeta said. And so the Tripathis temporarily froze the comments on the Facebook page.

Sangeeta said the family always knew that Sunil wasn't involved in the marathon attack; in a family of vegetarians, they still jokingly ribbed the 22-year-old philosophy major for his gentleness. "We would joke that if there was a bug in our house, Sunny would pick up the bug and put it outside so that he wouldn't hurt the bug," she said.

She looked at the FBI's photographs of the bombing suspects and said they knew immediately that neither of the men in the pictures — later identified as the brothers Tamerlan and Dzhokhar Tsarnaev — could have been Sunil.

Erik Martin, the general manager of Reddit, apologized to the Tripathis in a statement. "Though started with noble intentions, some of the activity on reddit fueled online witch hunts and dangerous speculation which spiraled into very negative consequences for innocent parties," he wrote. "The reddit staff and the millions of people on reddit around the world deeply regret that this happened."

But even though he was no longer being implicated in the bombings on the social media rumor mill, Sunil was still missing. Until this week.

Authorities did not suspect foul play, but said it could be months before they determine a cause of death.

"These past few weeks have really humbled us," Sangeeta said Tuesday. "Because these challenges that we're facing are maybe more pronounced in this story, but they're maybe not unique."

Here's an excerpt from the family statement released this morning:

"As we carry indescribable grief, we also feel incredible gratitude. To each one of you–from our hometown to many distant lands–we extend our thanks for the words of encouragement, for your thoughts, for your hands, for your prayers, and for the love you have so generously shared.

"Your compassionate spirit is felt by Sunil and by all of us.

"As these days have shown us, the media is a powerful tool to be used carefully. We hope you continue to exercise caution and treat human lives with delicacy.

"This last month has changed our lives forever, and we hope it will change yours too. Take care of one another. Be gentle, be compassionate. Be open to letting someone in when it is you who is faltering. Lend your hand. We need it. The world needs it."