Accessibility links
To Avoid Or To Embrace? How Actors Navigate Stereotypes : Code Switch Stereotyping in films and TV is as old as Hollywood itself. For some, portraying a stereotypical character — the ditzy blonde or angry black man — is a foot in the door to the acting world. For others, it is a path that can be limiting and repetitive. 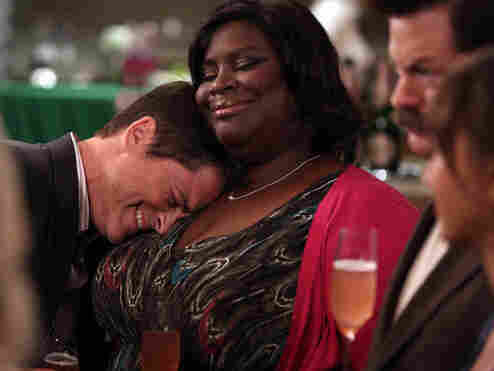 On NBC's Parks and Recreation, former stand-up comedian Retta plays office manager Donna Meagle. Donna is mostly in the background of the show, but is known for obsessing over her Mercedes SUV and for creating the Parks and Rec Treat Yo Self holiday.

Retta says this character is quite different from the roles she was offered in the beginning of her acting career.

"When I started, it was all meter maids or the sassy nurse, or the sassy receptionist in the hospital," she tells NPR's Neal Conan. "And I felt like: Are those the only jobs that large, black women have?"

Retta says she felt these roles didn't "look truthful" on her.

"I would often get called in to play a very loud, obnoxious — which, truth be told, I can be loud and obnoxious. My issue was when it was like a ghetto girl, I didn't think I was good at it; I didn't feel authentic. And so I had insecurities about going in on it."

She also worried that if she became known for those parts, casting directors wouldn't take her seriously. Retta started to get a wider range of roles when friends who knew her well would ask her to work on their Web projects or shorts.

"Casting directors, who don't necessarily know me — all they get are pictures. So they see your face, and they're like, 'Oh, we can place her in this or that.' "

Hollywood casts all kinds of stereotypes, from the ditzy blonde, to the Latina maid, from the Asian doctor to the Middle Eastern terrorist.

China-born actor Raymond Wong started his career in Pennsylvania and was one of very few Asian actors.

"It's a smaller market, so whenever they wanted an Asian actor I was the one they called," Wong says.

In his 20s, he would get cast for roles of 40- and 50-year-olds simply because there were not many other Asian actors around. Still, these roles were few and far between. "When they cast something else they never think of Asian actors to fill those roles," Wong explains. "So I never get called for any of the other stuff when they don't specially say 'Asian.' "

Wong is now based in Hollywood, which is a different story in terms of competition.

He remembers showing up for one casting call for a Chinese man in his age range.

"I thought, 'Oh, that can't be too bad!' I went there and there were hundreds of Asian actors — from Korean to Japanese, to Vietnamese, everywhere. They don't really care what the casting sheet says."

Retta says that little communities develop among actors of a similar type. "You tend to get really familiar with your peers in your type group, because you see them over and over and over again. You'll see me with the same girls having brunch because those are the girls I see all the time," she says.

Wong had a role in the 1995 film Roommates and on TV's Sex and the City, but has found the majority of his work in commercials. He says casting directors in advertising are focused on attracting a lot of different demographics with diversity on screen.

Ricky Sekhon, is a British actor of Indian ancestry who has embraced the terrorist roles that he's often called for. He played Osama bin Laden in the Academy Award-winning film Zero Dark Thirty, but only appeared in the movie briefly and didn't have any lines. Sekhon, who lost 25 pounds for the role, wrote about becoming bin Laden in a piece in The New York Times.

Sekhon says he didn't really have many qualms about playing the man who once topped the FBI's most-wanted list.

"If you just go on appearances, I have a little bit of a terroristy look about me," Sekhon jokes. "There's no getting away from the fact. I'm not at a point in my career where I have the luxury of choosing to turn down roles or not go up for roles."

He also believes that a sense of honesty and some level of connection to a role is important. "You won't find me being cast as a Beverly Hills guy because it would be very, very difficult for me to try to pull that off honestly. I'd have to work on the accent."

Sekhon says he hopes that gigs like Zero Dark Thirty will open up opportunities for more control over his roles, but he's making the best of it for now.