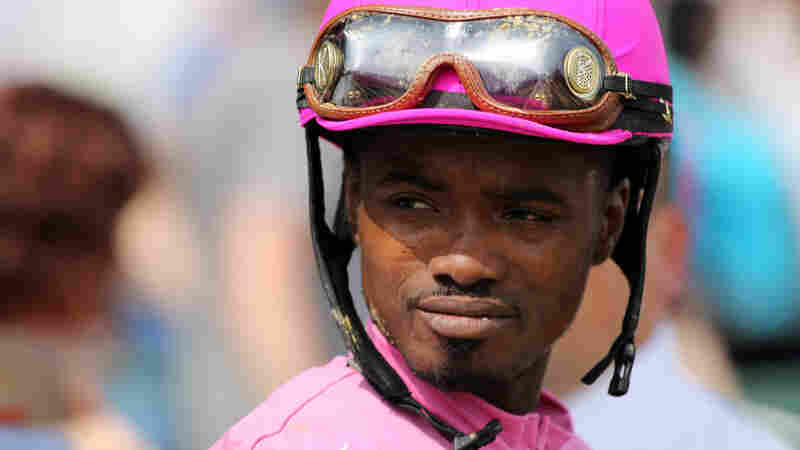 Jockey Kevin Krigger after a race at Churchill Downs in Louisville, Ky., on Thursday. Saturday will be the 139th running of the Kentucky Derby. Gregory Payan/AP hide caption

The Kentucky Derby's 139th running is this weekend, and it will feature a sight that's been a rarity in the race for much of the past century — an African-American jockey.

"Everything that comes with the Derby right now for me is not the same as the majority of the other riders, or any other riders, because I'm the only African-American rider in the race," Kevin Krigger says.

Krigger was born in the U.S. Virgin Islands, but he's been racing in California. He's the first African-American jockey to ride in the Derby in more than a decade.

Krigger will be riding Goldencents, a favorite in the race. And he's confident about his chances: "I'm going to be the first African-American to win the Kentucky Derby since 1902. And that's a hell of a milestone."

Yes, he said the first since 1902. African-American jockeys are rare now, but they used to dominate the sport. Most of the jockeys in the first Derby were black, including the winner. In later years, there were legendary black jockeys who won multiple Derbys and earned international fame.

"That was the face of horse racing until the latter 1890s, when it all started to change," says Maryjean Wall, a longtime horse racing writer who teaches at the University of Kentucky.

Jim Crow, segregation and African-Americans departing the rural South for cities all contributed to a white takeover of horse racing in the 20th century. Christopher Klein at History.com tells us more:

For centuries, Southern plantation owners put slaves to work in their stables. Slaves cared for and raced their masters' horses. They served as riders, grooms, and trainers and gained a keen horse sense from spending so much time in the stables. After emancipation, African-Americans continued to rule Southern race circuits while white immigrants from Ireland and England predominated in the North. ...

Then, suddenly, the rich African-American tradition at Churchill Downs ended. The rising tide of institutional racism that swept across Gilded Age America finally seeped into the world of horse racing. Jim Crow was on the ascent, and the U.S. Supreme Court itself blessed segregation in the 1896 Plessy v. Ferguson decision. Emboldened by the societal changes, resentful white jockeys at northern raceways conspired to force blacks off the track, in some cases literally. During the 1900 racing season, white jockeys in New York warned trainers and owners not to mount any black riders if they expected to win. They carried out their threats by boxing in black jockeys and riding them into—and sometimes over—the rails. In a cruel irony, free sons of former slaves felt the sting of whips directed their ways during races. Race officials looked the other way. Owners realized that black riders had little chance of winning given the interference. Even Willie Simms, the only African-American jockey to win all three of the Triple Crown events, had to beg for a mount. 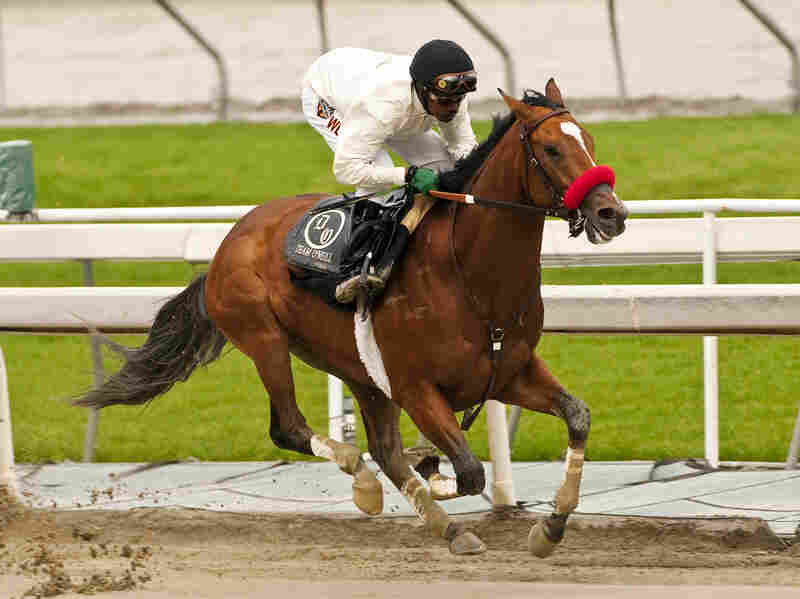 Wall says if Krigger wins tomorrow, it will be an important moment in the Derby's rich history.

"People will pay a lot of attention to that. They'll question why they haven't seen it for so long. Hopefully some thoughtful articles will come out of it," she says.

While Krigger has drawn a good amount of news coverage, another jockey in this year's Derby, Rosie Napravnik, is also attracting interest. Female jockeys haven't been as common in horse racing as African-Americans, but Wall says they haven't had an easy time, either.

"I was there in the beginning when male riders were boycotting any race that the women attempted to ride and the fans would hurl insults at them," Wall says. "I remember at a track in Florida, someone threw a rock at the window of the girl's trailer."

But for Napravnik, there's been some progress.

"I have not had to go through what they went through," Napravnik says.

Napravnik has already set some milestones. She's ridden in the Derby before. And last year, she became the first female rider to win the Kentucky Oaks, the race held the day before the Derby. Despite those successes, and the trailblazing of the female jockeys before her, Napravnik says there's still work to do for women in horse racing.

But she says she has a way around these situations: "The only way I try to deal with that is to beat them."