Accessibility links
On 'Hicksploitation' And Other White Stereotypes Seen On TV : Code Switch Writer Eric Deggans argues that it's just as easy to stereotype white, working-class people as folks of color. He's wondering: Why haven't we seen stronger protests of shows that stereotype whites? 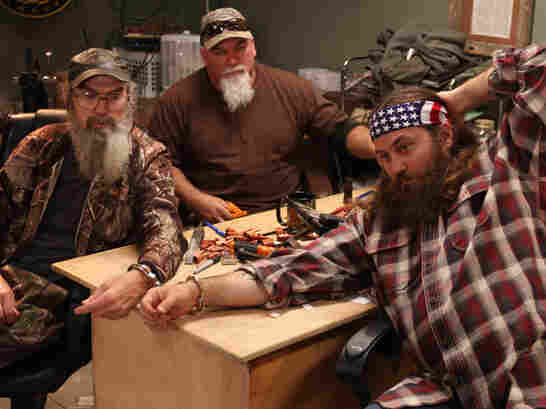 Some of the cast members of the reality show Duck Dynasty find themselves handcuffed to one another. A&E hide caption 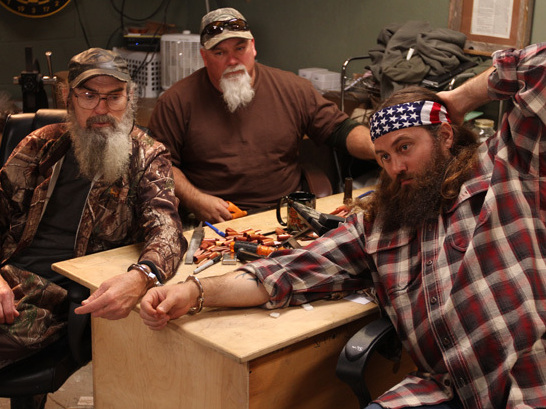 Some of the cast members of the reality show Duck Dynasty find themselves handcuffed to one another.

On cable TV, there's a whole truckload of reality shows that make fun of working-class, white Southern culture. They are some of the most popular and talked about new shows, too, such as Here Comes Honey Boo Boo and Duck Dynasty.

MTV tried cashing in on the redneck TV trend with its own hyped-up platform for young Southern kids behaving badly, Buckwild. It played like a Southern-fried version of Jersey Shore. Its stars were a dimwitted crew of young people in West Virginia drinking hard and riding pickup trucks through ditches filled with mud.

Then, one of them died, along with two other people, in a vehicle stuck in mud. The show wasn't shooting at the time, but Shain Gandee's death was enough to make MTV stop production.

Still, there are plenty more places to see blatant stereotypes of white subcultures, beyond the hicksploitation served by Buckwild. Over on VH1, Mob Wives are the cliche in-your-face Italian Mafia matriarchs. TLC has backward, barely educated rural kids wandering around New York City in Breaking Amish. And barely legal prospective brides brag about marrying their cousins in My Big Fat American Gypsy Wedding, also on TLC.

That's a big pile of the worst stereotypes about white, working-class people around.

And here's the thing: There aren't nearly as many new shows like this about African-Americans or Latinos, especially if they are working class. Shows like Real Housewives of Atlanta and Love and Hip Hop Atlanta show off more lavish lifestyles and have been around longer.

Late last year, the Oxygen channel tried to create a new one, developing a pilot featuring rapper Shawty Lo bragging that he had 11 kids by 10 different women. It was supposed to be called All My Babies' Mamas.

The backlash against this travesty was immediate and powerful. Radio personalities complained on-air, harsh coverage came from CNN and Fox News, and more than 30,000 protesters signed a petition against the show on Change.org.

It worked. Oxygen announced it wouldn't develop the series.

So why haven't these other shows stereotyping white people seen protests just as strong?

I suspect it's because too many folks see stereotypes as a problem mostly for people of color.

We've got lots of practice criticizing degrading images of black and brown people. Activists know how to gather the news stories, book the media appearances and assemble the petitions to press their case. Advertisers get nervous and programmers think twice.

What many forget is that it can be just as easy to stereotype white, working-class folks, and just as hard to scrub those stereotypes off your TV screen.

Eric Deggans is the TV and media critic for the Tampa Bay Times, a freelance contributor to NPR and author of the new book Race-Baiter: How the Media Wields Dangerous Words to Divide a Nation, published by Palgrave Macmillan.

A previous version of this post incorrectly said the show Breaking Amish appears on AMC. It is actually on TLC.