Accessibility links
'Seeking Asian Female' Takes A Close Look At A Fetish : Code Switch Filmmaker Debbie Lum sets off to make a documentary about men with Asian fetishes and unexpectedly finds herself in the middle of the story, acting as a bridge in a relationship. 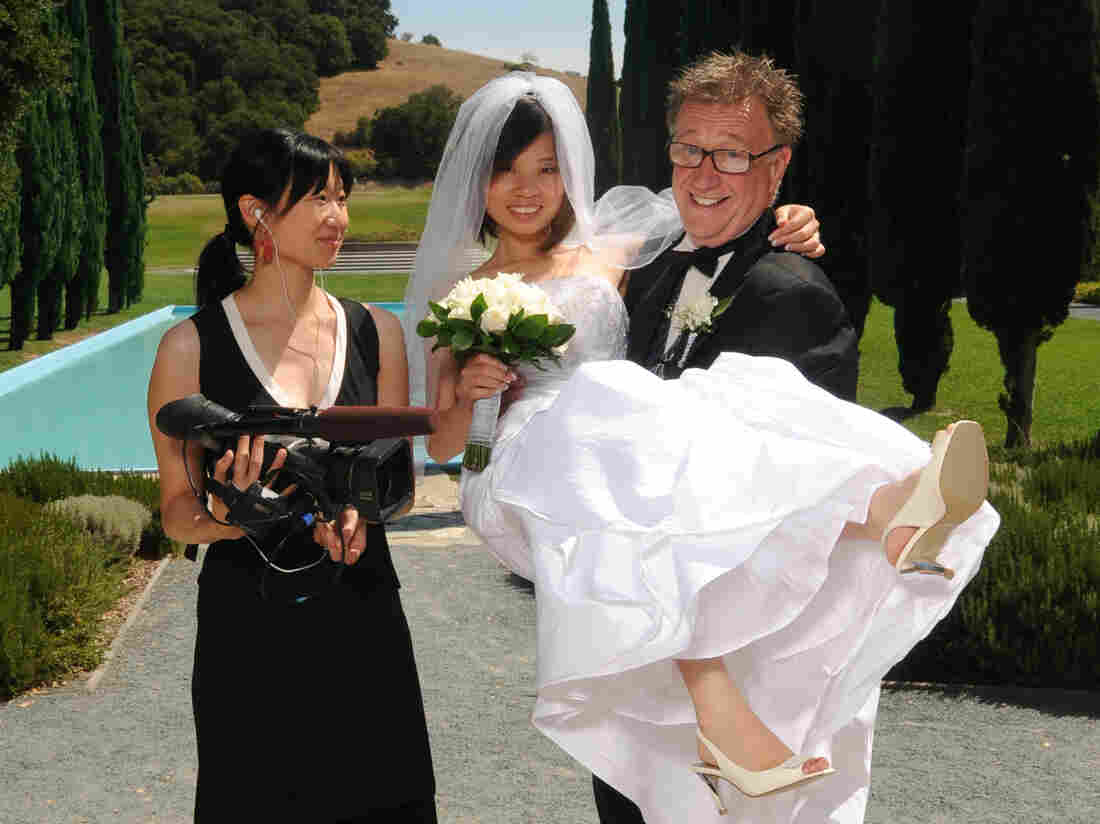 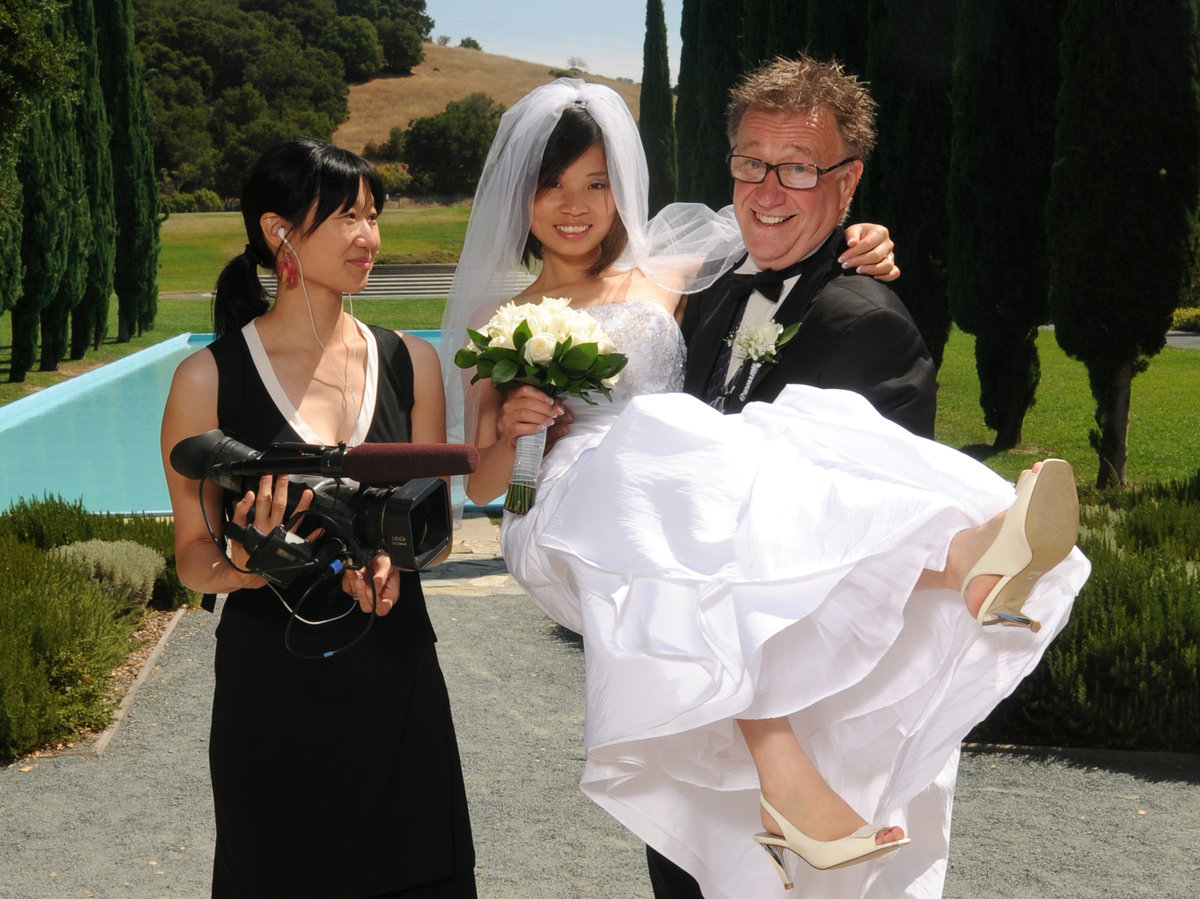 Filmmaker Debbie Lum poses with Steven and Sandy, her documentary subjects, on their wedding day.

It's hard to watch Seeking Asian Female, Debbie Lum's uncomfortably close look at the phenomenon some call "yellow fever" — when usually non-Asian men fetishize Asian women as romantic or sexual partners — without squirming. And at first, it seems like it wasn't so easy for Lum to document the phenomenon.

"I had to fight the urge to turn around and leave," Lum says in a voiceover, right before she meets the character we know only as "Steven" for the first time. She told me this guy had one of the "worst cases of yellow fever" she has seen.

Steven, an earnest, bespectacled, white American man with an unsettling penchant for Asian females, is not exactly the most appealing of potential suitors. He has a tendency to evaluate women based on their level of "Chineseness." As he beckons Lum inside his messy apartment, he tells her with unabashed glee: "You look very Chinese, with the bangs. You know I like that." Later, Steven excitedly describes his love interest Sandy as "looking so Chinese. You can't look any more Chinese than that." What makes him an expert on looking Chinese is pretty unclear, though he doesn't seem too concerned about that.

He seems to lust after Asian women for their supposed beauty and docility. "I mean I'm an old guy, I'm 60," he tells Lum before meeting Sandy, musing about his ideal woman. "Do I want the farm girl to take care of me? Do I want... an intelligent business woman to help me grow back and forth? What do I want? ....There's this Vietnamese movie called The Scent of Green Papaya that has this servant girl who cooks these beautiful meals. Gee, would it be like that?"

Meet Sandy, a 30-year-old woman from the Anhui province in China. Sandy finds Steven on an online dating site and seems to be seeking a potential entryway to the U.S. and some economic stability. (She takes two separate photos of them and makes a sort of endearing, sort of creepy couples picture, much to his delight.) Steven visits her a few times in China, they hit it off and she comes to the states on a K-1 engagement visa.

Sure, Sandy takes care of him. But she's hardly the demure lady he hoped for, just as he's hardly the flashy American she might have expected. Throughout the film, a frustrated Sandy describes wanting to get out of the relationship as soon as she has enough money and schooling.

The film has a whole bunch of flashing warning signs that say this relationship Might Not Be A Good Idea. I cringed a lot. When a frustrated Sandy confesses that she'd "lose face" if she told her family and friends in China about her house-less, money-less American beau, I found myself asking, Why are you doing this?

And yet. Over the course of the film, something remarkable happened for me. Sandy and Steven, together, started to seem like it may not be such a bad thing after all. 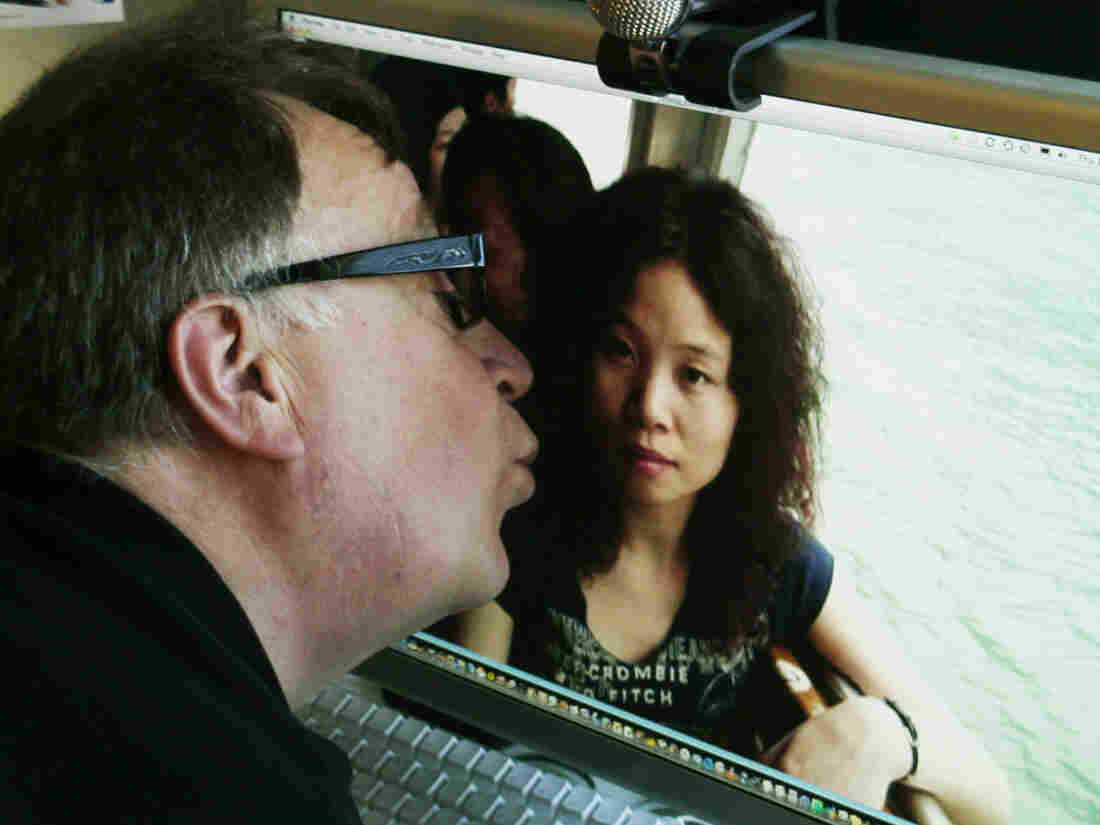 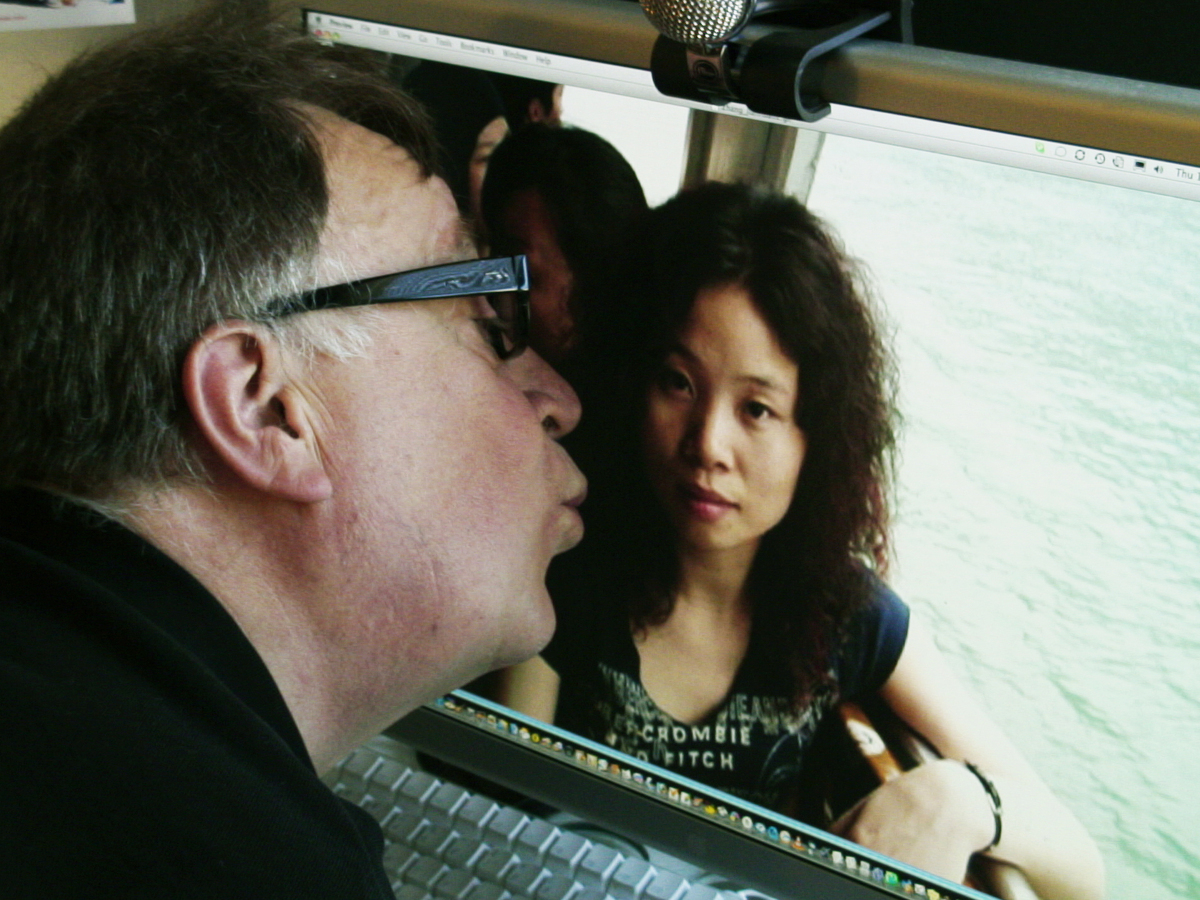 Steven kisses a photo of Sandy, his bride from China.

There was something unsettling about the film, and my reaction to it. Why was I feeling sympathetic to Steven, who fetishizes Asian women? Can a relationship, borne out of something perhaps a little twisted on both sides, evolve into something genuine? Is it even fair to judge someone else's relationship? Lum, who like me is Chinese-American, told me that she began making the documentary because she was sick of dealing with men (usually non-Asian) who shared Steven's creepy fascination with Asian women. But as she made the film, Lum's thoughts changed, sort of like mine.

After Lum settled on Steven as a subject for her documentary, she thought the film would be about his relationship with Sandy. She had no idea that she'd become intimately wrapped up in their courtship: she soon found herself their designated (and reluctant) translator, and from there, the couple's de facto marriage counselor.

When Sandy finds a cache of photos of Steven's ex-girlfriend on his computer — the ex was Chinese, natch — she freaks out. Lum translates their fight. "I can only prove my love day by day," Steven says. (Lum refuses to translate that for him.)

"This is going to be an adjustment on both of our parts," a teary-eyed Steven tells the camera after his fight with Sandy. "This is not China, and I am not Chinese. I'm hoping for the best."

As Lum gets closer to the couple, she starts to see beneath the surface of their relationship — that there might be genuine feelings.

"There's this whole other individual there," Lum said of Steven. "When I see couples like Steven and Sandy, I think about their stories now, as much as I think about what it reads as, or what it looks like from the outside."

Lum, by the way, is married to a white Irishman. But she says her relationship with her husband is different than Steven and Sandy's. "Steven and Sandy's is a kind of modern take on an old-fashioned arranged marriage," Lum said. "They went into it with a really pre-determined desire to be married above everything else, whereas my husband and I kind of just met."

Yet she sometimes wonders if others think of their relationship as one tinged by yellow fever.

Sandy and Steven, by the way, are still together. Sandy now speaks English fluently, Lum said.

I came to this film thinking of Steven as "an Asian fetishist" and of Sandy as "an opportunist." Having spent a little while getting to know them through Lum's lens, I saw their nuances. Parts of their relationship — their fights, their daily interactions, their worries — became incredibly human, completely relatable to an outsider.

Except I feel like there should be a "but."

This narrative still doesn't sit well with me. The way Steven thought about Asian women — stripping them of their individuality, layering on pre-conceived ideals, replacing people with types — was challenged when he met Sandy, a real person with layers of her own. They might make the relationship work, yes, and I might even want them to. But in that case, their road to happiness feels marred with potholes that still need to be examined and considered.

A man we believe to be Steven Bolstad, Seeking Asian Female's documentary subject, responded to the post in the comments section. (We also reached out to filmmaker Debbie Lum to comment and are waiting on her response.) Here's what Steven had to say.