Accessibility links
Can A White Guy Represent For His People? : Code Switch Prominent members of minority groups are often seen as representatives of their group. But writer Channing Kennedy muses on who represents him, as a white person.

Can A White Guy Represent For His People?

Can A White Guy Represent For His People? 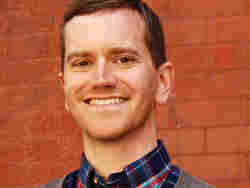 Last week, we wrote about the way members of minority groups are frequently linked in the popular imagination with prominent fellow members of their group. We asked Channing Kennedy, frequent contributor to Colorlines.com, for a commentary on this phenomenon from the perspective of someone without any immediately obvious minority affiliations. Here's what he told us:

Last week, Gene Demby listed four ways that people of color come to represent their entire minority group, willingly or not. He mentions that this is a dynamic that white people don't have to deal with – the burden of representing one's people, positively or negatively – and I agree, much as I agree that the world is round. Actually, that's a better metaphor than I intended, because the reality is more complicated than the truth; while I understand intellectually that the earth is round, I walk on the same flat surface as everyone else.

Some background, and this is a bit Race 101, so bear with me: a group's 'representatives' come into being in direct reference to the stereotypes about that group. We are surprised that Jeremy Lin is so good at basketball and reassured that Charles Ramsey's unobjective heroism is fueled by McDonald's. These stereotypes, in turn, are there to caricature and disenfranchise the groups they apply to, and they're tellingly absent from groups that actually hold power. (As Dave Chappelle observed, nobody knows what white people eat.)

And while there are dehumanizing, disenfranchising stereotypes that apply to whites, they're always along an accompanying axis of identity: Obama-watermelon jokes exist because he's black, but Clinton-Big Mac jokes exist because he's 'poor white trash.' White jokes are inherently toothless when factors like class are removed; implicit bias affects Forrest Whitaker in ways it will never affect Jared Fogle, no matter how many mayo packets the latter stuffs in his pockets at a deli. (You didn't hear it from me.)

In other words, white people don't have representatives because white people don't have dehumanizing stereotypes for their representatives to embody or debunk, and whiteness is simply too ingrained in positions of power for these stereotypes to manifest any real economic or political consequences. And while blackness, Latino-ness, Asian-ness, etc. are often defined by actions and abilities — what they do — white society kicks out its undesirables by pointing to their other identities — what they are. As Hari Kondabolu points out in his live act, James Holmes* was described in the press as mentally ill, while Seung-Hui Cho is Asian without elaboration. Literal Caucasians the Tsarnaev brothers were declared solely Muslim as soon as it was discovered that they could be.

One reason that whiteness is uniquely 'downgradable' is that white people are so massively overrepresented – in media, politics, management positions, marijuana possession, etc. – that internal diversity, or at least the appearance of internal diversity, is inevitable. And it's in this diversity that things get interesting.

We live in a society in which one's identity is often defined by one's most disenfranchised demographic stat. Sometimes this is for clear and admirable political ends, as with the many celebrities who've come out as queer to serve as beacons for bullied queer teens. Sometimes it's to more troubling and involuntary ends, like the poverty stereotypes of Honey Boo Boo. And sometimes it's craven powerlessness performance (I'm looking at you, Men's Rights Activists and Nice Guys Of OKCupid).

Like the unextinctable hipster racists that Lester Bangs wrote about way back in 1979, some of us do obscene things to affirm ourselves as powerless, and we can't face the cognitive dissonance that comes with owning up to our own role in injustice. College-party blackface and warbonnets are dismissed as 'just a joke'; anti-Asian Youtube rants by white kids are claimed to have been made only for a select audience (and then, uh, uploaded to Youtube). Daniel Tosh's endless 'jokes' about raping women and committing violence against trans folks enjoy a national audience through his TV show, and criticism of them is invariably framed as 'oppressing free speech.' This theory of global power, in which mean social justice bloggers rule all with an iron fist, was clearly come up with in a hurry.

But largely, it's only within whiteness' neutrality that these stereotypes stand isolated without being trumped by race in the public perception of the individual. And thus we have a queer rights movement whose foremost representatives are white, a feminist movement whose foremost representatives are white, and Brad Paisley requesting emotional reparations for 'Southerners' with zero acknowledgement of the Black communities who've lived in the South since before they had a say in the matter. This both erases and foregrounds whiteness, atomizing it; Barack Obama and John McCain both allied themselves with Christian Pastor Rick Warren, not White Person Rick Warren, but it would have been impossible for them to conduct the same calculus with a rural black or Asian or Latino Christian pastor, no matter what size the congregation.

In my 32 years as a white person, I've self-identified (at various points) as a Midwesterner, a feminist, a nerd, a poor person, a redneck, a queer ally, an atheist, a punk, a Unitarian, a college dropout, a person with ongoing mental health issues, and any number of other nouns, opt-in or otherwise, which I experience on a uniquely empty palette as a straight white cisgender male. Some of them have had actual social and economic ramifications on my life, and some of them have just been me trying to feel special. But all of them are boxes inside a box too large to see the walls of; when a straight cisgender white male with mental health issues gets in the news for something horrible, I know the box is large enough for me to step away from him. And when my perspective on that box is shifted without my permission, like when a friend asks me why white people are so weird, I compulsively stick out my arms and legs and refuse to fit in.

This isn't a positive trait, in my opinion. As W. Kamau Bell says, our society would be better off with real white pride, an acknowledgement that 'white' history is just as valid or invalid a category as black history.

Very recently, I was at a good friend's 30th birthday party with a bunch of white people with shaggy hair and silly clothes – identical to myself, in other words. When the dance playlist hit up Ol' Dirty Bastard's "Got Your Money," one of the attendees yelled "REST IN PEACE, ODB!" and everyone flooded to the dance floor to embarrass themselves. It felt weirdly gross to me, and I immediately remembered how much I loved this album ten years ago, and how a white friend and I recorded a full album of covers, with me sing-rapping with all the racial epithets left in. Shame and hot blood flooded my face, and as I scanned the room for Instagrammers to step behind, I searched for an appropriate box to put these people in.

Hipsters, I thought to myself.

*This story originally said that the comedian Hari Kondabolu told a joke about Jared Loughner. The person referenced in the joke was James Holmes.