Accessibility links
'Scandal': Preposterous, Unmissable, Important : Code Switch The show has become a social event for a large and varied crowd of African-Americans and others on Twitter, for reasons mysterious, complex and worth exploring. 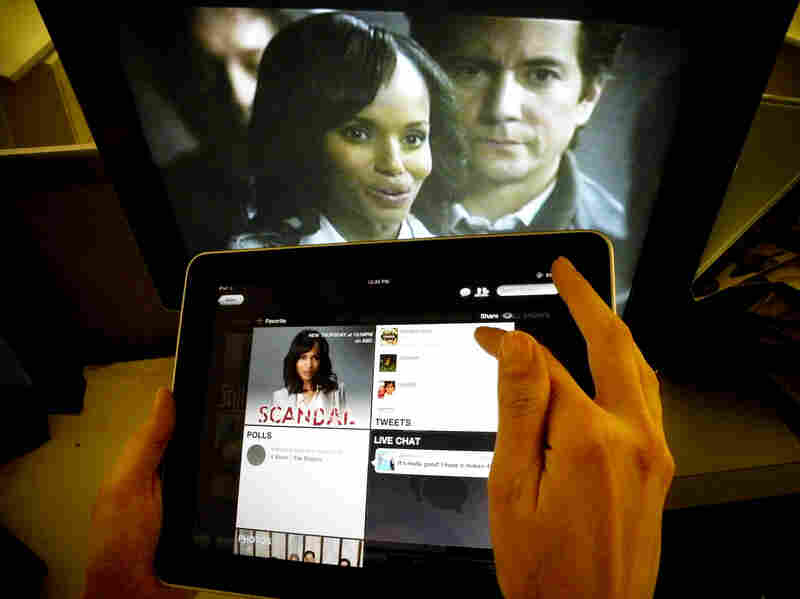 Kerry Washington from ABC's Scandal is shown on a TV monitor as an iPad displays the show page. Frazier Moore/AP hide caption

Kerry Washington from ABC's Scandal is shown on a TV monitor as an iPad displays the show page.

OK, let's get this out of the way: Scandal is a ridiculous show.

The hit ABC drama about a Washington "fixer" named Olivia Pope just wrapped up its second season with one of its trademark cliffhangers.

Scandal's plot arcs aren't really arcs so much as straight vertical lines or curlicues. In the season finale alone, the president of the United States — who is the worst, as our play-cousin Linda Holmes points out — tells his wife that he plans to divorce her, run for re-election and marry his mistress Olivia (the show's putative protagonist), but the president is crushed after viewing a sex tape of Olivia and a soldier whom the president previously sent to shadow her, and one of Olivia's employees seems to have developed an addiction to murder.

It's the kind of show where someone snarls the line, "Wake up and smell the justice!" and it doesn't make you roll your eyes because to roll your eyes would suggest that line stood apart from the rest of the dialogue.

So yes: Scandal is completely, utterly preposterous. And I watch it, without fail, every Thursday.

Because — and I am not exaggerating — watching Scandal is a deeply edifying, profoundly communal experience. The show is the first network drama with a black female lead since 1974, and its executive producer, Shonda Rhimes, might be one of the most powerful figures in television. It was the highest-rated show among black audiences for the first week of May.

And, a big part of Scandal's success has to be attributed to "Black Twitter," the jokey self-appellation to the universe of black folks on the social-networking service. (Black users are way over-represented and disproportionally influential, although no one really knows why.) On Thursday night, there were 571,353 Scandal-related tweets. Scandal's adoring, hilarious, critical Greek chorus on Twitter — academics, pastors, teenagers, college kids, comedians, journalists, retirees, your auntie — feels like some kind of digitized concentration of black American life.

(Not that the folks at ABC really want to talk about that. When The New York Times' Tanzina Vega asked folks at the show about the role black audiences might play in the show's success, the show's producers got a little evasive. The plots on the show itself deal with race obliquely, if they address it at all.)

There are times when the show itself feels almost beside the point; when I finally caught the season finale a day after it aired, sans all the snark and shock, it was appreciably less fun.

When I asked people on Twitter the reason for Scandal's popularity, many said that the show was propelled by the same soapy engine that powered earlier prime-time hits like Dallas and Knot's Landing. But this juicy, twisted show feels much more ambitious than those.

There were other people who argued that the show's success is basically all about actress Kerry Washington — does anyone not like Kerry Washington? — and her portrayal of the superhumanly well-dressed Olivia Pope. But her general flyness and verbose, Rhimes-ian declarations of badassery/love/remorse almost camouflage the fact she's actually a villain on par with Tony Soprano and Walter White.

There are so many ways to perceive her. Hopeless romantic or narcissistic home-wrecker? Mother hen to her damaged work family or their ecru-clad jailer? She bounces between all of those roles, often in the span of a single episode.

This is Scandal's cruelest, most ingenious trick: We want to root for the powerful, accomplished black woman at its center because of the rarity of that sight on TV, but in the show itself that character is a lying, amoral monster. Watching that aforementioned Greek chorus argue about and wrestle with just what the hell to do with Liv is a big part of what makes the experience of watching and tweeting it in real time so fascinating.

Like Tyler Perry's oeuvre (with which it shares a histrionic streak), Scandal's place in black popular culture is way outsized because of the paucity of other black faces in their ecosystem. The work of Perry and Rhimes becomes shorthand for Where Black America Is Today.

But where Perry's work is deeply polarizing, in part, because of his apparent distrust of career-oriented women, Scandal's popularity is fueled by the many professional black women who, like Olivia, are less likely to be Firsts (but may be still Onlys). They are ambitious and careerist and hypercompetent and well-compensated and unapologetic about all of it.

Olivia is both recognizable and intermittently admirable even as her profound flaws keep her from becoming some neat, Huxtable-ish ideal. There are still precious few black faces on network TV, but that's undoubtedly a kind of progress.

So yeah, Scandal is preposterous and overwrought and hammy. It's a trifle — but hardly inconsequential.