Accessibility links
Obama's Shout-Out To A 'Morehouse Man' : Code Switch When President Obama spoke at Morehouse College, he singled out — and surprised — a graduate who had faced long odds.

Obama's Shout-Out To A 'Morehouse Man'

Obama's Shout-Out To A 'Morehouse Man' 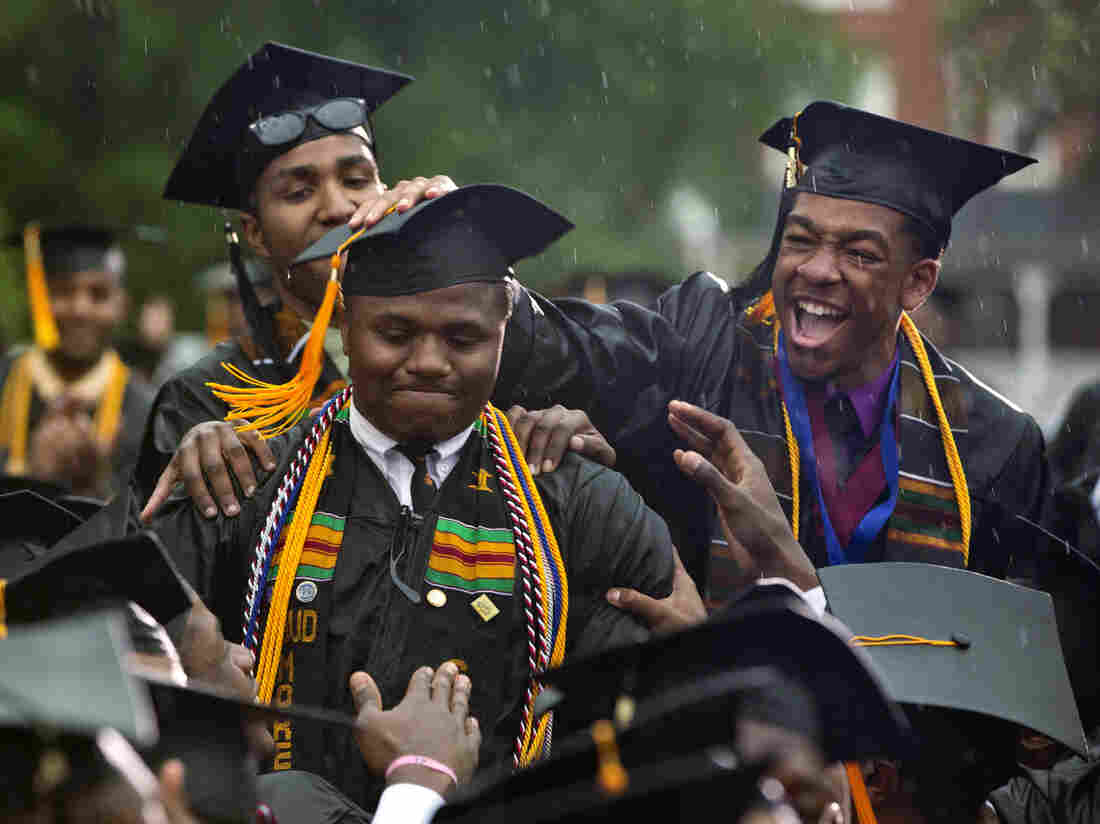 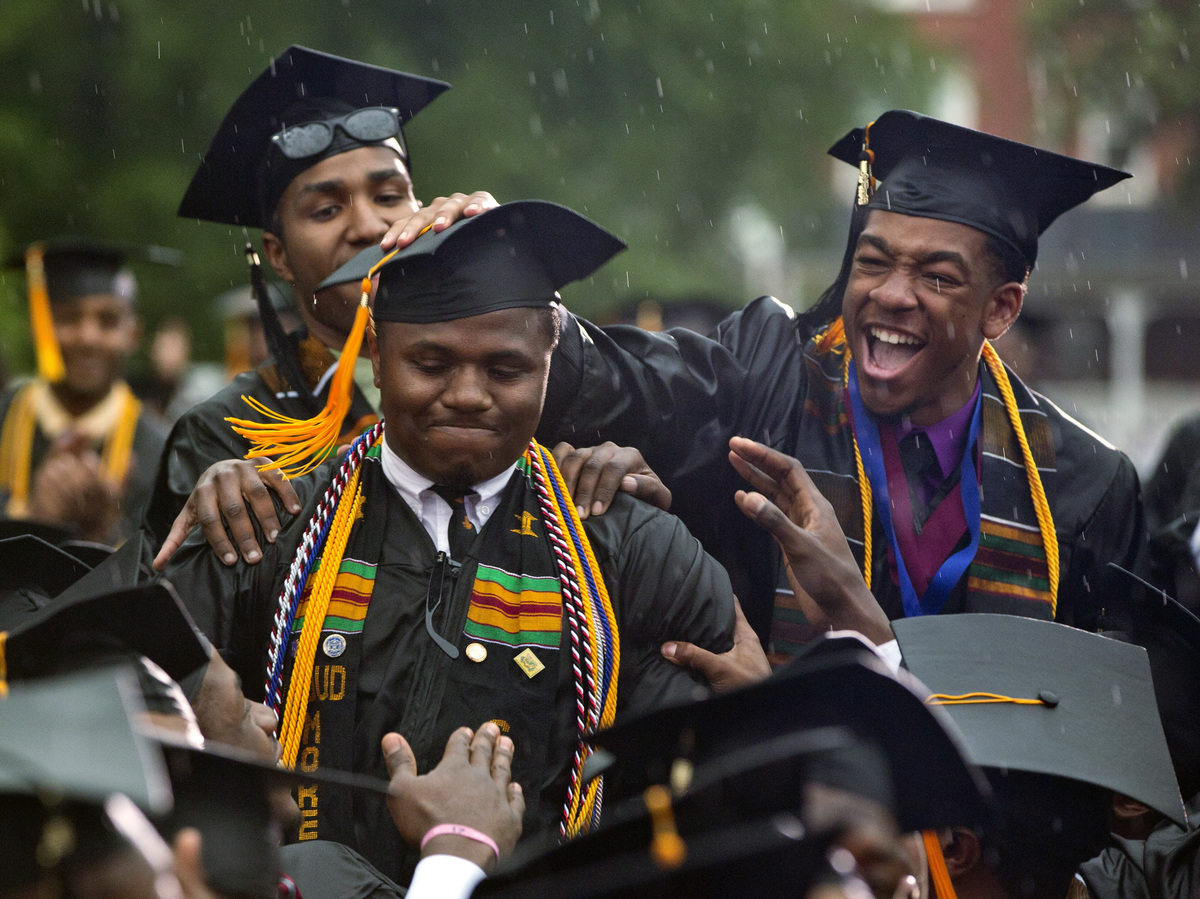 Morehouse graduate Leland Shelton is congratulated as he is acknowledged by President Obama.

When President Obama stepped to the lectern on Sunday to address Morehouse College's graduating class, he gave exactly the kind of speech that you give at Morehouse. The president told the graduating students that they had been trained and nurtured to be leaders. He linked their personal and professional successes to the well-being of their communities. This is part of the obligation of being a "Morehouse Man," he said.

The all-men's college was once a crucial on-ramp into the black elite, and "The Morehouse Man" — learned, proud, ambitious, socially engaged, morally upright — was held up as a kind of ideal of black manhood. And importantly, this is how many of the school's students and graduates think of themselves. (That notion has gotten much more complicated in recent years.) President Obama ticked off some of the notable names who had passed through the school on their way to doing big, important things: Spike Lee, Maynard Jackson, Martin Luther King.

"When Leland Shelton was 4 years old — where's Leland?" the president asked the audience during his speech. Shelton heard his name and froze. A friend nearby nudged him and made him stand up. The president went on.

"When Leland Shelton was 4 years old, social services took him away from his mama, put him in the care of his grandparents. By age 14, he was in the foster care system. Three years after that, Leland enrolled in Morehouse. And today, he is graduating Phi Beta Kappa on his way to Harvard Law School."

But Shelton hadn't told many people on campus much of his personal history. ("Strategic sharing," he called it.) But here he was on this improbable graduation day, standing in the throng in the rain as the president of the United States singled him out for praise, a black man held up as an example to other black men. Classmates clapped him on the back and applauded. Shelton tried not to cry in front of his grandfather, his siblings, his wife. No dice.

Shelton was so harried during his last few days on campus that he missed a phone call and message from the White House. And so he didn't know the president was about to put him on blast.

Another part of the president's speech — a section that loomed larger in news reports about the president's commencement address than it did in the actual address — rankled many folks watching at home. "We know that too many young men in our community continue to make bad choices," President Obama said. "Sometimes I wrote off my own failings as just another example of the world trying to keep a black man down. I had a tendency sometimes to make excuses for me not doing the right thing. But one of the things that all of you have learned over the last four years is there's no longer any room for excuses."

It came a day after the first lady, Michelle Obama, made similar statements at the Bowie State University commencement ceremony, another historically black college. "Today, instead of walking miles every day to school, [many young blacks are] sitting on couches for hours playing video games, watching TV," she said. "Instead of dreaming of being a teacher or a lawyer or a business leader, they're fantasizing about being a baller or a rapper."

The Atlantic's Ta-Nehisi Coates wrote in response: "I would have a hard time imagining the president telling the women of Barnard that 'there's no longer room for any excuses' — as though they were in the business of making them."

There's something dutiful and obligatory about this kind of bootstraps-and-responsibility speech at an HBCU graduation, of course. And it's a posture the president has often taken when speaking to black audiences.

It's a message that resonated at the Morehouse commencement and with Shelton.

"Before he shouted me out I was just thinking about how great the speech was," Shelton said. "He sounded like a Morehouse Man. He'd integrated so much of the history of Morehouse College into his speech ... and the [idea] that Morehouse is here to make great men."

So after being held up as the Morehouse Man par excellence by President Obama, how did Shelton feel about the "Morehouse Man" idea? He was proud of it, obviously, although he said it could use some updating. "I do feel that how we feel about gender roles is outdated and needs to be updated for 2013," he said. "But what I do believe is that Morehouse men should have that global consciousness to them."

He added, "That's not to say we have to be Atlas and have the world on our shoulders."