Accessibility links
'Las Caras Lindas': To Be Black And Puerto Rican In 2013 : Code Switch The complex identities navigated by black Puerto Ricans play out in the music of hip-hop artist Tego Calderón and one of his inspirations, Ismael Rivera. 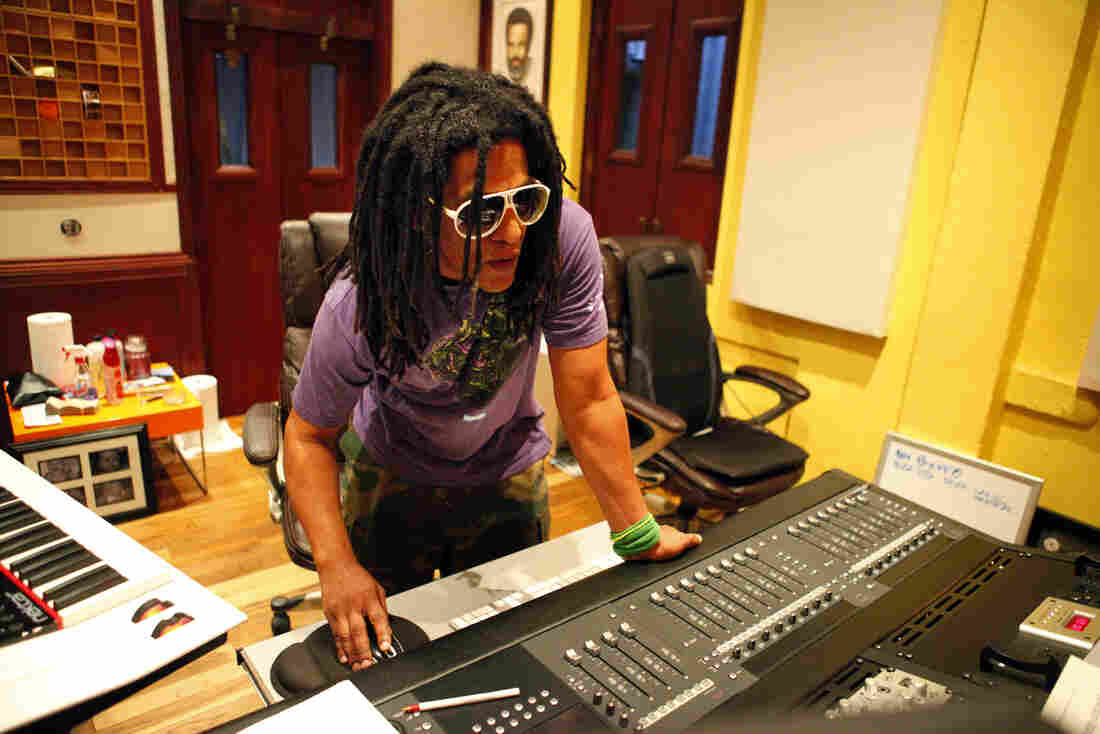 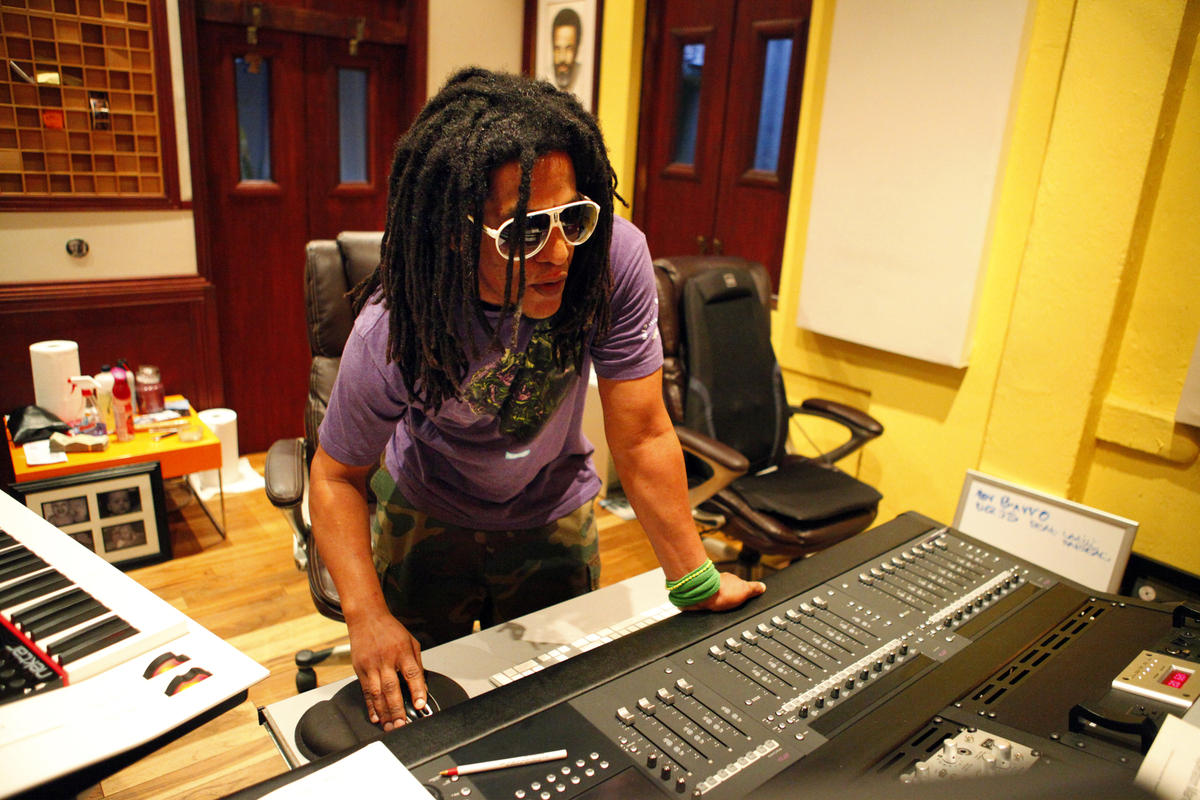 Puerto Rican hip-hop artist Tego Calderón is seen in his studio, El Sitio, in Santurce, San Juan, Puerto Rico. Behind him, a portrait of Ismael Rivera.

In "Niche" ("Black Man"), iconic Puerto Rican singer Ismael Rivera navigates the labyrinth of race and ethnicity in the Caribbean. A light-skinned "café con leche" black man, he wanders through his island like a ghost of a colonial Spanish past, shooed off by both blacks and whites uncomfortable with his presence and what he represents.

In another iconic and deeply melancholy song, "Las Caras Lindas" (or "The Beautiful Faces"), Rivera sets aside the discomfort and pens an ode to his people: "The beautiful faces of my black race, so much crying, pain and suffering, they are the challenges of life, but inside we carry so much love."

I was recently in Puerto Rico reporting on the island's troubled economy and reignited diaspora. During that time, I had the chance to visit legendary rapper Tego Calderón. In his studio in Santurce, Puerto Rico, I found the entire place wallpapered with photographs of Ismael Rivera.

That's no coincidence: Rivera and his musical partner Rafael Cortijo penned some of the most danceable and poignant music narrating the stories of black Puerto Rico. It's a torch that "El Abayarde" (as Calderón is also known) has picked up eagerly; he shared an array of Rivera music with me and my NPR colleagues. He's never shied away from shedding light on race relations on the island, and his honesty has made him a pillar of Latin rap:

"A slave nation, descendants
Docile, tame, that doesn't feel African
They say they are tan.
A country that despite all the mistreatment
Insists that it loves its homeland
But on all fours."

Calderón has also always been extremely vocal about his belief that Puerto Rico should be an independent country. "La Muralla" — "The Wall" — on which Calderón performs alongside Puerto Rican heavy metal band Puya, is one of the angriest, most precise takes on the issue I've ever heard.

Although the Spanish are long gone, Puerto Rico has a complex relationship with the US. It is an unincorporated territory; many prefer to simply call it a colony of the United States. The complexity of race relations on the island is inextricably linked to the fact that colonialism is not at all a ghost of the past. It is alive and well, forcing Puerto Ricans to see themselves through a multitude of mirrors. At some point reality becomes confusing.

González described Puerto Rico as an increasingly fragile building with a foundation that was vastly underappreciated. That house was constructed over the course of hundreds of years, beginning with the Spanish invasion, which led to the construction of the first floor – the blacks slaves and mestizo peasants who enabled the Spanish to develop their colony. For González, it was these people, occupying the first floor, who held the honor of calling themselves the first Puerto Ricans not because they were the first people to occupy the island — the Taino natives, largely exterminated by the Spanish, held that honor – but because "they had the greatest difficulty in imagining any other place to live."

Thus, González's analysis begins with a strong dose of irony. From the start, the house of Puerto Rico was on shaky ground, propped up by people who did not exactly choose to make Puerto Rico their home. And the construction of each successive storey brought stress to the emerging edifice. The second storey was built upon the large 19th century immigration of Europeans that the Spanish supported to loyalize the island population; they became the landowners in the new colony, reigning over the people occupying the first storey. The third storey was laid after the US invasion in 1898, when the US military replaced and marginalized the colonial ruling elite. The fourth storey, the last at the time of Gonzalez's essay, is the managerial class that emerged in the 1940s after the establishment of the Commonwealth (Estado Libre Asociado) and a program known as Operation Bootstrap (Manos a la Obra) led by the Puerto Rico Industrial Development Company, known locally as Fomento.

Calderón expressed disappointment that a lot of black Puerto Ricans do not support the cause of independence from the US. He described a toxic mix of feelings of gratitude, anger and inferiority about the relationship. Among black folks, he says, those feelings are compounded by an education system that teaches little to nothing about black history, and focuses on instilling a sense of relief that slavery is a thing of the past. "They created a lot of 'house niggas,'" Calderón says. "They teach you to be grateful you are no longer a slave."

For Calderón, education was received at home. His father was extremely conscious of Caribbean history and black pride, a fact that a young Tego sometimes found oppressive. "But then I realized everything he said was true." He says that moment of clarity came when he joined the Puerto Rican diaspora, moving to Miami as a teenager. It was then that he stumbled across bands like Public Enemy. He came face-to-face with what he describes as a more blatant racism, about which he finds himself ambivalent:"In the US, it's in your face. In Puerto Rico, it's swept under the rug. I don't know which is worse."

For more from Tego Calderón, check out the latest episode of Alt.Latino, the podcast from Jasmine Garsd and Felix Contreras covering Latin music and culture.