Accessibility links
'Part Of The Community': Oklahoma's Latinos Rebuild After Tornado : Code Switch The heart of Tornado Alley is home to one of the fastest-growing Latino populations in the country. After last week's devastating twister, the community faces some unique challenges — including protecting vital documents and overcoming the fear of asking for help. 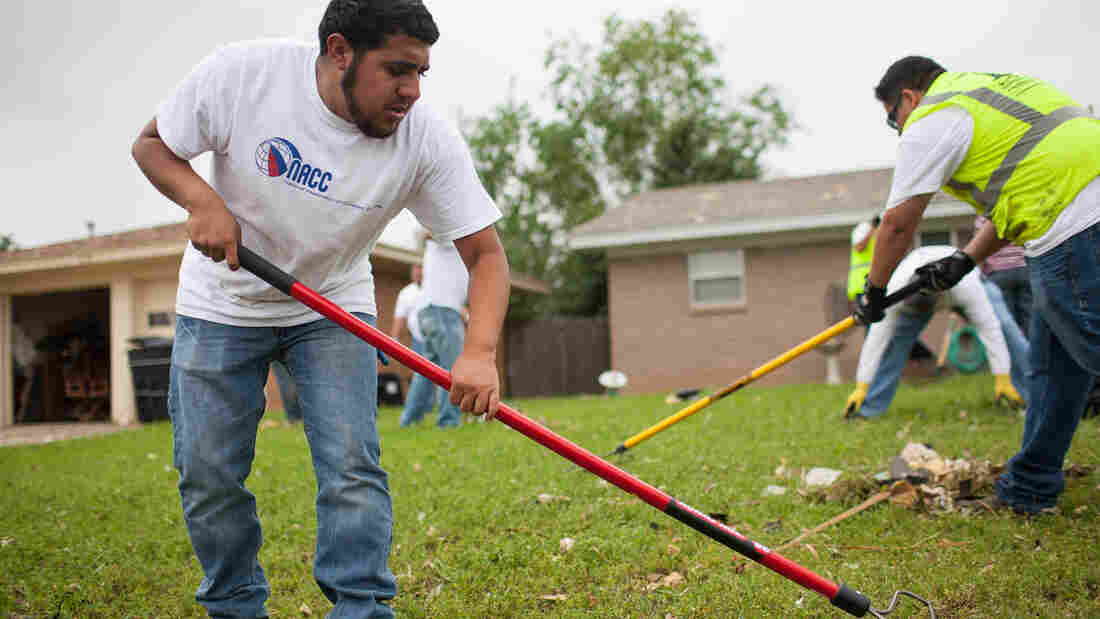 Mynor Sanchez, a resident of Moore, Okla., lives a few blocks away and three houses down from major destruction. He is volunteering Friday in the neighborhood with his church, Templo El Alabanza, trying to do any tasks with which residents need help. Katie Hayes Luke for NPR hide caption 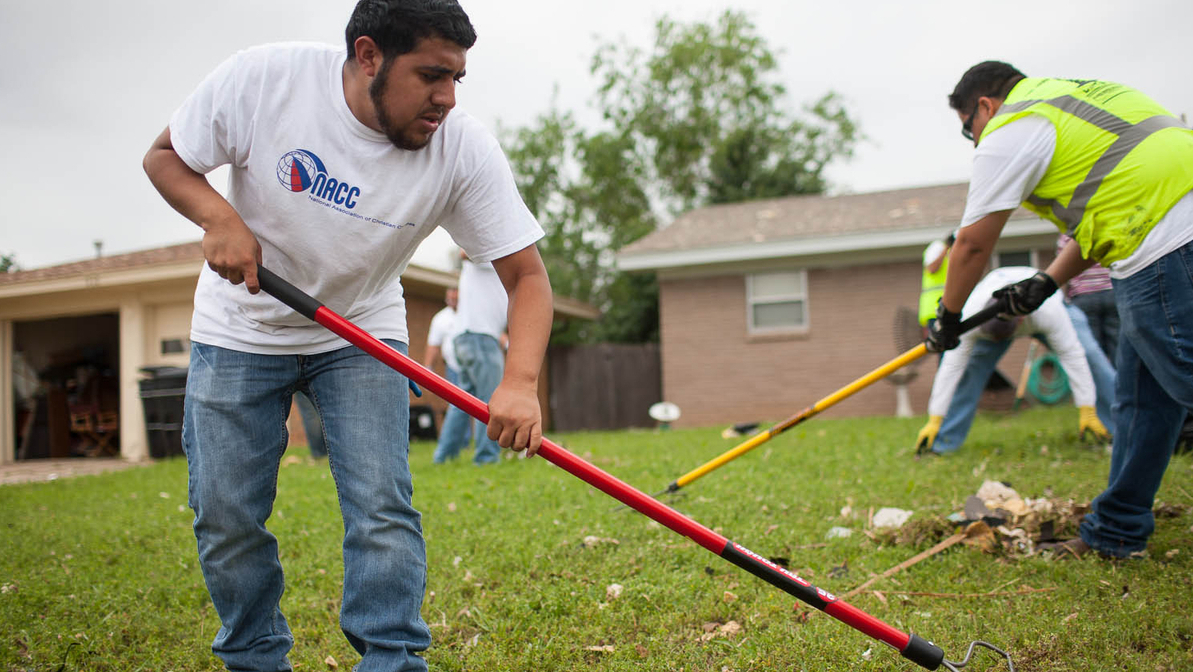 Mynor Sanchez, a resident of Moore, Okla., lives a few blocks away and three houses down from major destruction. He is volunteering Friday in the neighborhood with his church, Templo El Alabanza, trying to do any tasks with which residents need help.

Pastor Chano Najera calls out T-shirt sizes in Spanglish to volunteers waiting for their uniforms.

It's easy to spot Najera in this crowd — just look for the cowboy hat. He preaches in Spanish at Templo De Alabanza in Oklahoma City. On this morning, though, he's wrangling a group of young Latino volunteers as they wheel cases of water bottles onto trucks headed for Moore, Okla., where an EF-5 tornado ripped through neighborhoods last week, but spared Najera's home.

Najera was born in Mexico and has lived in Oklahoma for more than three decades — long enough to know which tornado tips are especially worth preaching: "Go buy a safe box!" he says. "Keep the most important papers and documents and whatever they have in the safe box."

Then, he says, find a space under the floor board of your home and "bury it."

Protecting birth certificates, passports and other personal documents is especially important for immigrants, who make up a large portion of the Latino community in the Oklahoma City metro area, including Moore. Najera also tries to encourage community involvement among Latinos who may feel they don't belong.

"What we try to tell them is: 'No, no, no. You need to be part of it. Don't exclude yourself from the process. We are part of the community,' " he says.

Once the dozens of volunteers from Najera's disaster relief team arrived in Moore, one group set to work raking storm debris from a frontyard. 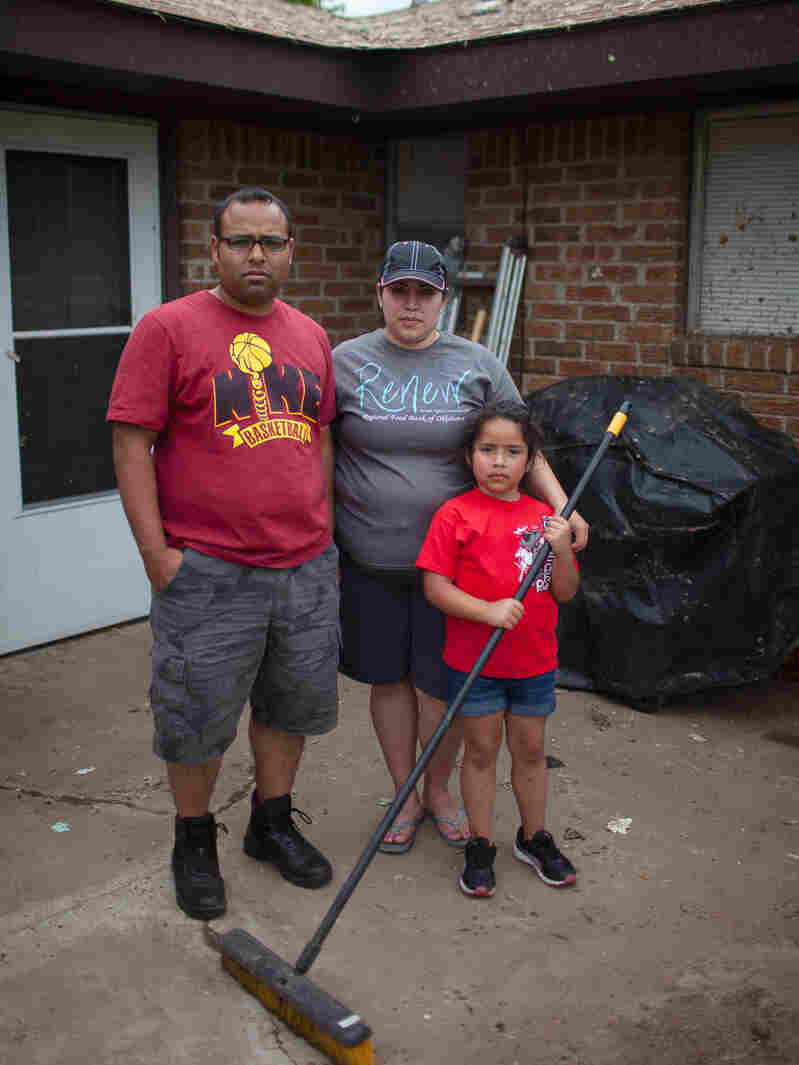 Eli and Maria Sanchez with their daughter, Kaylee, 6 at their home in Moore, Okla., on Friday. Katie Hayes Luke for NPR hide caption 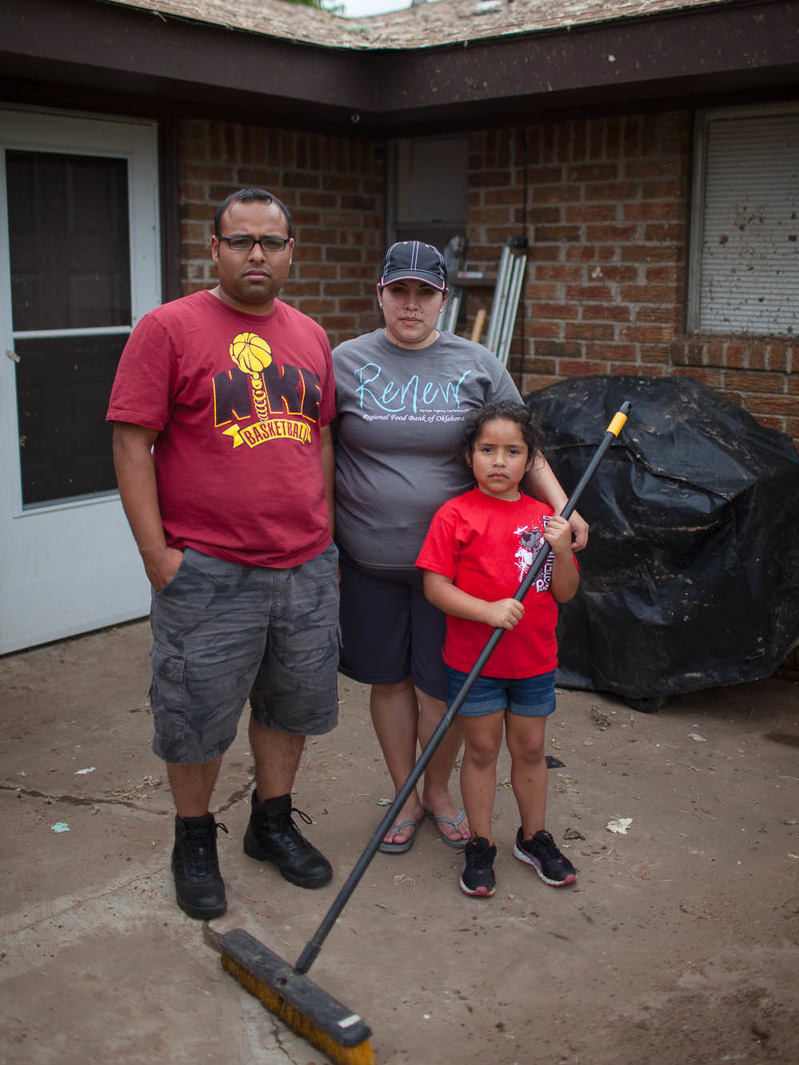 Eli and Maria Sanchez with their daughter, Kaylee, 6 at their home in Moore, Okla., on Friday.

Overcoming 'The Mentality Of Fear'

Eli Sanchez and his family of four live in this neighborhood. The foundation for their brick home moved during the storm, leaving cracked walls inside. The tornado was even less forgiving to his parents, whose home in Moore was leveled.

Sanchez says the one thing his father — an immigrant from Guatemala — hoped to recover was his American citizenship certificate.

"He was proud of that, because he framed it and he put it on the bookshelf for everybody to see," Sanchez says.

Sanchez's wife, Maria, says she understood her father-in-law's wish, because she just became a U.S. citizen herself.

Maria Sanchez was born in Mexico, and she says she hasn't forgotten the barriers facing undocumented immigrants.

It's an all-too-familiar kind of anxiety for people like Amelia, an undocumented immigrant from central Mexico. NPR isn't using her last name.

"It's stressful," Amelia says in Spanish.

Amelia cleans offices to support her and her 8-year-old daughter. They lived in a trailer home in Moore that was in the path of last week's tornado. When the storm came through town, Amelia rushed to pick her daughter up from Plaza Towers Elementary School. They then took cover under a bridge. Amelia says it's a miracle they survived, but they still lost nearly everything.

"I was desperate," Amelia says, "But also afraid to ask for help."

But she knew she had no choice but to take the risk. It took her three days to build up her courage. Then she got in her car, talked to church volunteers and went to a public health clinic for counseling. She even approached an official and asked how the government could help rebuild her life. She says she can't imagine having done any of this before the tornado.