Accessibility links
Black Americans Give Entertainment Options Failing Grades : Code Switch People often talk about African-Americans and other minorities being subject to "food deserts" — areas where fresh, healthy, affordable food is hard to come by. The findings of an NPR poll suggest that we should be thinking about "popcorn deserts," too. 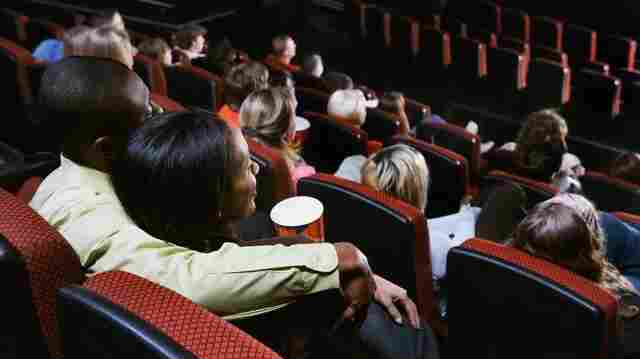 A poll by NPR, the Robert Wood Johnson Foundation and the Harvard School of Public Health found that African-Americans are unhappy with their local entertainment venues. Corbis hide caption 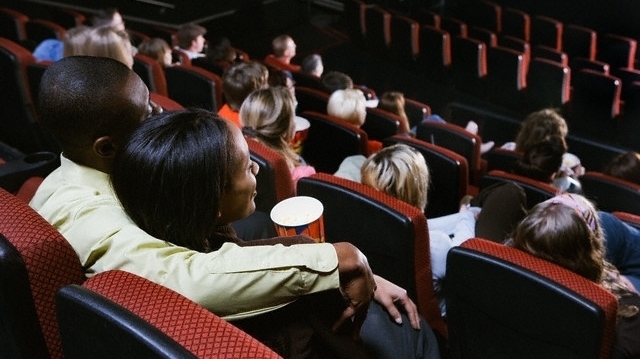 A poll by NPR, the Robert Wood Johnson Foundation and the Harvard School of Public Health found that African-Americans are unhappy with their local entertainment venues.

All this week on Code Switch and on air we've been digging into the findings of a survey of African-American views of their communities, finances and social lives. We conducted the poll with the Robert Wood Johnson Foundation and the Harvard School of Public Health.

What scored lowest in terms of community satisfaction — the most Ds and Fs — were local entertainment venues.

People often talk about African-Americans and other minorities being subject to "food deserts" — areas where fresh, healthy, affordable food is hard to come by. The findings in our poll suggest that we should be thinking about "popcorn deserts," too.

I called up some of the people surveyed to find out why they hated their movie theaters and clubs so much. What I heard fell into two distinct categories. First, there's not much to do, and the little there is to do is of low quality and/or unsafe. The second category of complaint boiled down to: Entertainment in my neighborhood is geared toward white people, and I feel out of place.

I caught up with Angela Berry-Payne on the phone while she was baby-sitting. She lives in a predominantly black neighborhood in Athens, Ga. She says she can't stand the nightclubs that cater to African-Americans in downtown Athens.

George Clarke lives in Waltham, Mass., a majority-white suburb of Boston, and he says there's just nothing for him in terms of entertainment there.

"When you look around, and you don't see another face that's as dark as you, then you know that you might be in the wrong place," he says. Clarke says he travels 45 minutes on public transportation to have a beer in the "right place."

Jennifer Heasley — a single mom and teacher who lives in York, Pa. — agrees with both Berry-Payne and Clarke. She's uncomfortable with her suburban entertainment options: "Often, my children and I go out, and we're in a restaurant, and we're the only black family."

She's uneasy with her more urban options, too. She likes the diversity in downtown York, but says she isn't thrilled with the entertainment available because it's substandard or dangerous.

Heasley doesn't understand why what she's looking for is so hard to find. "Live entertainment, a nice jazz band, maybe some spoken word, an environment where it's brick and low lighting and people are stimulated by the conversation that's going on," says Heasley, "that's what I would like to see."

Preston Lauterbach, author of The Chitlin' Circuit, says entertainment "is good for the soul."

He says that the heyday for black entertainment venues — especially in the South — took place during segregation:

"Saturday night on Broadway in Macon, Ga., in 1954, you would have a decision to make, because down on the corner at the 5 Spot might be Ray Charles, across the street at the Cotton Club might be Little Richard, down the highway at another place might be James Brown."

Lauterbach says that with the triumph of integration came the dismantling of thriving entertainment corridors.

"That social fabric has been torn, and it has yet to be stitched back together in a way that fully meets the needs of those communities the way that those needs were once met," he says.

I had a long conversation with one entrepreneur trying to meet the entertainment needs of the African-American community. We spoke at a movie theater in South Los Angeles. The 15-screen cineplex at the Baldwin Hills/Crenshaw Plaza had a recent face-lift, thanks in part to Ken Lombard's efforts.

I broke the news to Lombard that entertainment venues drew the lowest ratings in our survey. He says he's not surprised; he's been in the business for more than 25 years.

Lombard worked with Magic Johnson to open this theater in a historically black part of Los Angeles nearly 20 years ago. He says people were desperate for a nice, clean venue close to home, and when it opened, it was a huge success.

Today, the investment firm he works for has spent $35 million revamping the entire mall in order to offer better shopping and dining. He says profits are up, but adds that it hasn't been easy. The default response he gets from retail and restaurant brokers is often no. (And he's not the only one.)

"We don't expect the answer to always be yes," Lombard says. "But what we expect is, come and take the tour, look at the neighborhoods, roll your sleeves up and try to understand it in very much the same way you do non-minority communities. And then you'll see some significant progress."

Lombard says that to be successful, entertainment venues have to feel authentic and relevant to African-Americans. But you have to put in the work to understand your patrons.

The results of this poll suggest there are a good number of people out there feeling ignored.