Accessibility links
A Meeting On Tolerance Turns Into A Shouting Match : Code Switch A forum meant to quell tensions between Muslims and non-Muslims in Tennessee was derailed by hecklers. 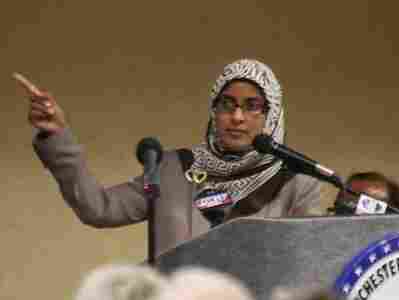 Sabina Mohyuddin was heckled as she spoke at the town meeting last week in Manchester, Tenn. William Hobbs hide caption

The public meeting in Manchester, Tenn., about 70 miles from Nashville, was supposed to address and tamp down discrimination toward Muslims there.

But instead it turned into a shouting match.

Bill Killian, the local U.S. attorney who organized the meeting, told the people in attendance that hate speech was not protected by the First Amendment. Over the last few years, there have been tensions between Muslims and many Christians in Tennessee. A Coffee County commissioner recently posted a picture on Facebook of a man with one eye looking down the sights of a shotgun, with the caption: "how to wink at a Muslim." The photo went viral.

Killian never directly referenced the Facebook post. But he did say that someone didn't have to follow through for a threat to be a hate crime. "If someone makes threats of violence, that is not protected speech, and they will be prosecuted," he said.

At first, Killian tried to keep from talking over the hecklers. One attendee yelled "traitor!" at him as he spoke. But as they went on, he gave up and kept his head down, following his prepared remarks on the lectern as hundreds in Manchester, Tennessee, shouted "go home" and called him a "serpent."

He slipped out of the meeting and declined to comment about his remarks.

The heckling didn't stop with Killian. An FBI agent who spoke and Muslim advocate Sabina Mohyuddin were greeted with jeers.

"In 2007, a mosque was burned down in Columbia, Tennessee," she said. But many in the crown cheered that statement. "Shame on you," Mohyuddin said in response.

Three men were convicted of hate crimes in that case.

Ibrahim Hooper of the Council on American-Islamic Relations said the mood at the meeting felt like people should be carrying "pitchforks and torches."

But the county's mayor, David Pennington, said he disagreed with that characterization of the area's residents.

"We're not just a bunch of old country hicks out here, sitting on the side of the road whittling," he said. Pennington said that the residents were offended because they didn't like being scolded by the federal government. "I think a lot of people were offended that the U.S. attorney was coming down here to give us a lecture."

Pennington also said that many of the loudest protesters at the meeting weren't locals. Indeed, activists from around the country — including Pam Geller, the blogger and author of "Stop The Islamicization of America" — were outside stirring up the crowd with bullhorns and waving American flags.

"This is the line in the sand!" Gellar yelled.

Some of the protesters said that the federal government was playing favorites with religions and giving special protections to Islam. Tim Cummings of Nashville, which is 70 miles away, said that he respected Muslim beliefs until they begin infringing on his own First Amendment rights.

"When I'm being told that if I post something which they might interpret as being inflammatory or I will be subject to criminal or civil penalties, yeah, that's being infringed upon," he said.

But he said the heckling was inappropriate and likely hurt their cause.

Remziya Suleyman, who belongs to a lobbying organization called the American Center for Outreach, said the yelling was intimidating but also emboldening.

"If it was to scare us off, if it was to push us away in anyway, it actually did the opposite for me," she said.