Accessibility links
A Hair-Touching Exhibit Touches Off A Range Of Reactions : Code Switch When Antonia Opiah staged a public art exhibit in New York inviting strangers to touch the hair of several African-American models, reactions to the exhibit ranged from outrage to appreciation. Celeste Headlee interviewed Antonia and her sister Abigail on Tell Me More. 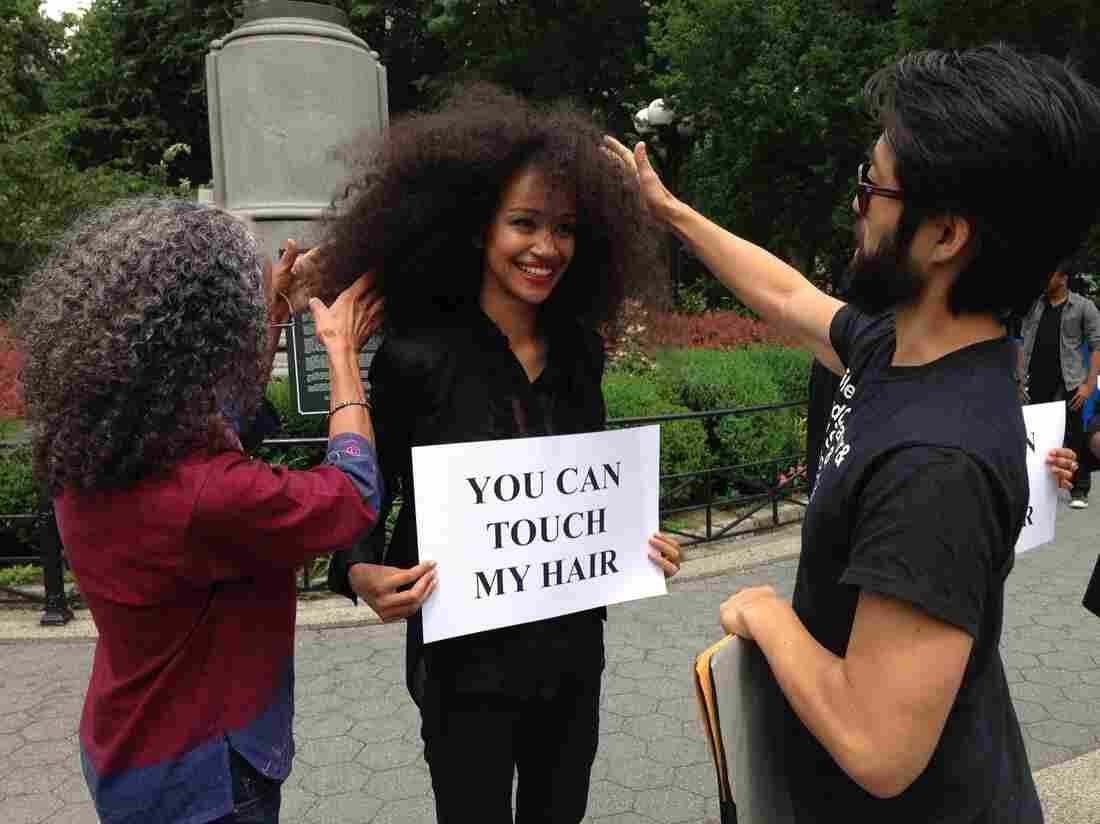 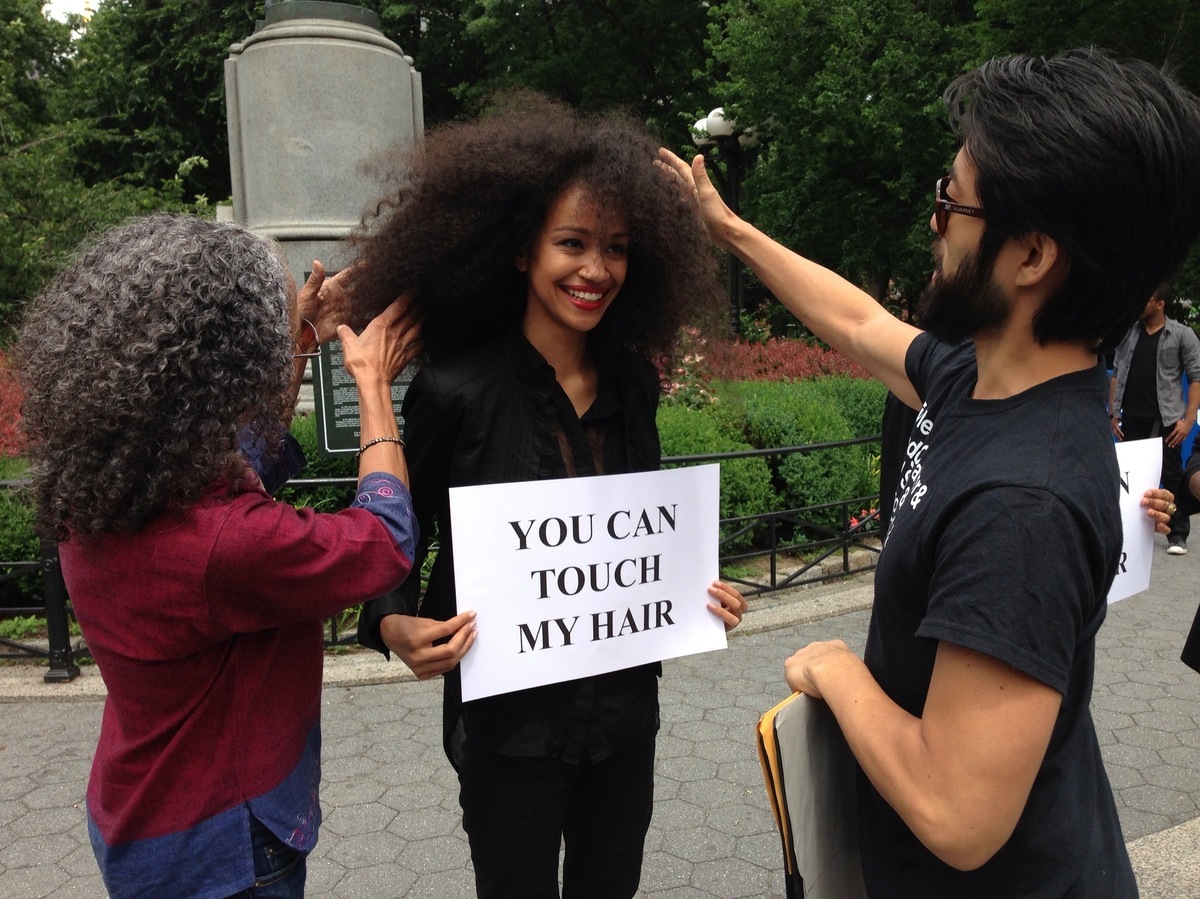 Antonia Opiah and her sister Abigail wanted to start a conversation about hair, but they ended up inspiring a protest. The controversy began with an essay that Antonia wrote for the Huffington Post in which she argued that no one should say, "Can I touch your hair?" without putting some thought into the request:

And if that effort means asking someone if you can touch their hair so it's not something that's foreign to you anymore, ask it. Ask the question. But ask it only when you've earned the right to do so. Ask it when you've taken the time to Google some of the basic questions about black hair. Ask this five-word request when you understand that it carries the weight of hundreds of years of being told our hair is unacceptable and now being told that it's a curiosity. Ask it when you understand that enlightening you about our hair is a responsibility no one individual wants to bare. Ask it when you've actually developed a relationship with a person to the point where you don't have to doubt their response to the request.

Antonia took the topic a step further by staging a public art exhibit in New York, with help from her sister. The interactive exhibit featured three black models holding signs that read, "You can touch my hair." Hundreds of people took them up on the offer, but across the street, a group of protesters expressed outrage over the event.

Celeste Headlee: How do you explain to a white person, a nonblack person why this is so emotional?

Antonia Opiah: "When it comes to hair — black hair is not just hair in America. There's so much history that we carry on our heads, so to speak. For the longest time we've been told that our hair isn't acceptable in its natural state, so we're always encouraged to straighten it or wear weaves. ... There's been a few moments in time when we sort of, you know, put aside what everyone was telling us about our hair and did what we want. The black power movement, for example.

"And right now there's currently a natural-hair — some call it a 'renaissance' or a 'movement' happening — and it's doing a lot to reacquaint us with our hair. So I guess to sum all of that history up in a nutshell, it's a difficult thing for any one person to explain. Which is why I thought having a larger discussion about it could help sort of disseminate the weight that our hair carries."

Abigail, there were people, African-American women especially, [who were] really offended. Who felt as though this art project trivialized their feelings of exploitation when people touched their hair, or ask to touch their hair. What's your response to the people who were outraged over the project?

Abigail Opiah: "Well ... I think one of the main distinctions that we wanted to make [was between this and what] Sarah Bartman went through, for example. [Sarah Bartman was a South African woman who was exploited and displayed all over Europe.] Some of the people had signs saying, 'I'm not your Sarah Bartman.' ... Sarah Bartman was duped, so to speak, into being put on display by white people. So I think, you know, they'd seen images of the first event, they had seen the hashtag and they didn't really understand the larger frame of the story that we were trying to tell.

"So I think they became very incensed about that and came out to really just add another layer to the dialogue, just to kind of let people know that this is not a free pass to let people, you know, just touch random women's hair. So that was their stance, and we kind of welcomed them. Because they were essentially saying the same things we were saying, just in a more direct form."

Antonia, I wonder if you were surprised by the strength of the protest?

Antonia: "I wasn't surprised by it. I understand where it comes from. We are a protective community. And we have reason to be protective, or to protect ourselves. Racism isn't something that happened in the past. It's something that continues to happen today. And the way that it happens today is in a very sort of — it's not as visible as in the way it happened in the past, which makes it more dangerous. So we're always as a community protecting ourselves from that kind of danger. So I understand where the protest came from. I think what — I took a couple of things away from the protest.

"But I think that if you look at that whole picture it shows exactly where people stand. And it shows that it's not — we all don't think, feel the same way about it. ... Not everyone sees it as someone stroking them, like an animal. Some people actually welcome it. And that's one of the big takeaways that I got from the entire projec — that the response to that question varies from woman to woman and even from moment to moment."

So you wanted to start a conversation with people who are not African-American perhaps. To help them understand the issue better. So let me allow you to do that. Let me play the role here of someone who says, "Look, I don't even know why you mention racism. It's not racism. I think your hair is beautiful. I've never felt anything like it. And I want to see. I want to understand what it's like." When you say "racist" that makes me feel hurt. How do you respond to that?

Antonia: "Well, that's a hard one to respond to. But I guess the way I could respond to it is that when — if you're someone I don't know, and you're putting me on the spot, it makes me feel self-aware and it makes me feel self-conscious. It makes me aware of my difference from you, even though I'm American too, in a time when I don't necessarily want to feel different. ...

"So how do I want to respond to you? I think the underlying issue here is that [in] America we all go around touting, you know, integration and 'We are all equal,' and 'We are all the same.' But there are these small moments that are happening in everyday lives that do a lot to make people aware of their race and aware of their differences.

"And in some moments I may be open to celebrating my differences and sharing those moments, or sharing my differences with you and also learning about how you're different. In other moments I don't necessarily want that responsibility. I may just want to go about my day and just be a normal person — be an American, not a black American or a white American, or someone that has hair that's different to you. Because my hair isn't different to me; it's normal. It's something that I don't have to explain to myself, or anyone else like me. So the fact that I have to explain it to you is something that I shouldn't necessarily have to do because you don't have to explain your hair to me; because I know everything to know about your hair. The media tells me about your hair; the media doesn't necessarily expose my hair or my kind of hair to you."