Accessibility links
Deconstructing Martin Luther King, Jr.'s Dream : Code Switch How does a great orator develop his speeches? Before Martin Luther King, Jr. gave his iconic address at the Lincoln Memorial in August 1963, he gave speeches in Detroit and Newark, N.J., that tested the ideas and language of "I Have a Dream." 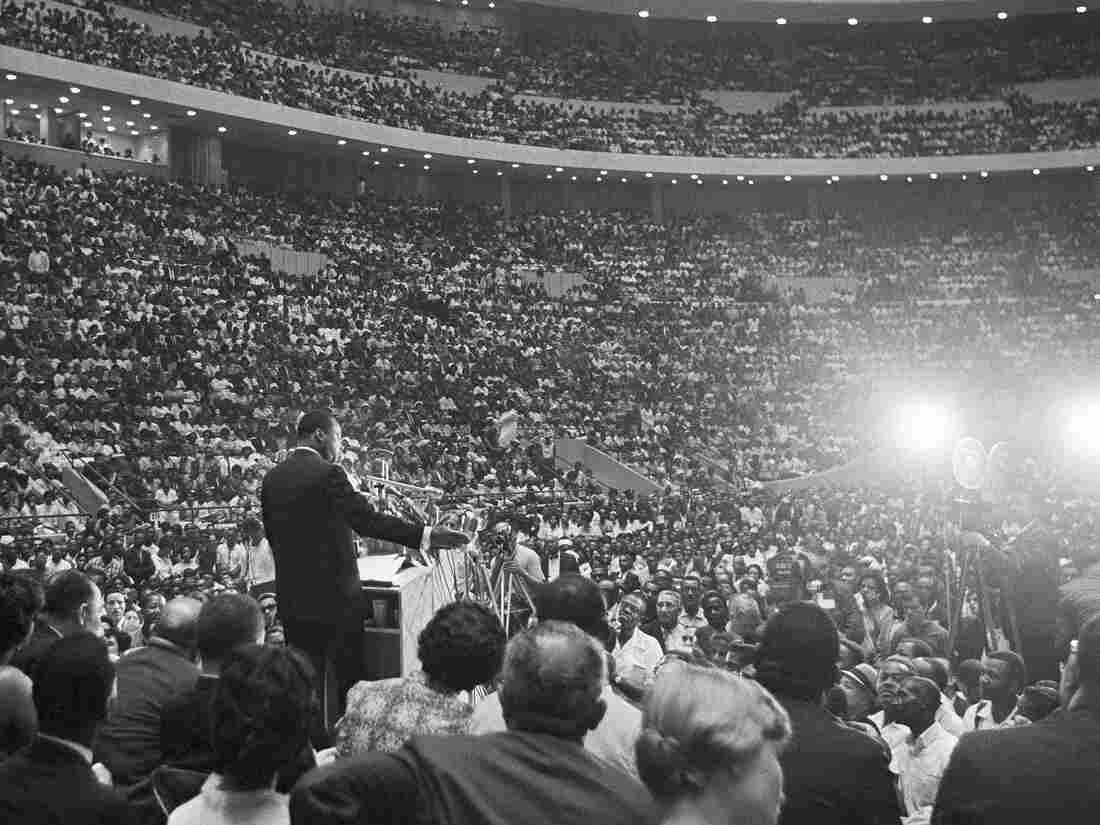 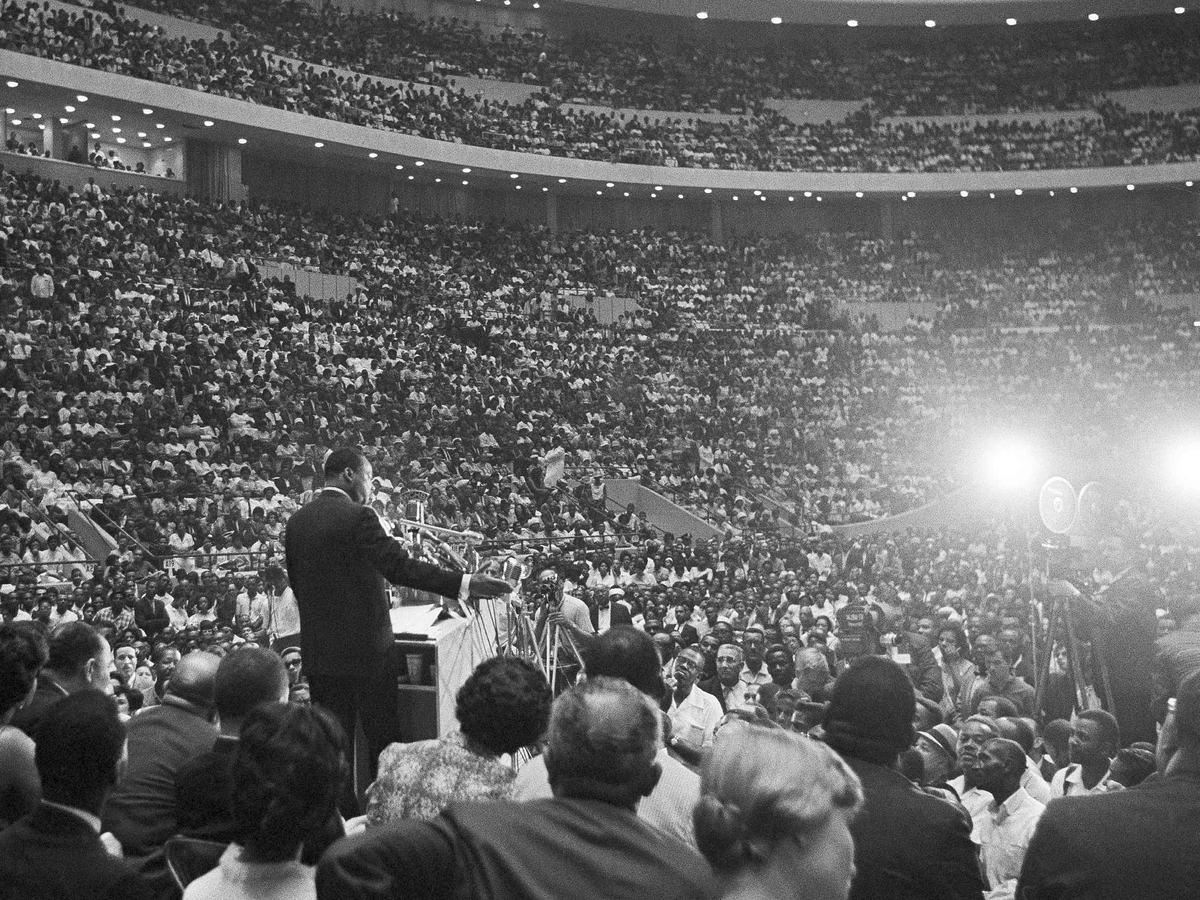 "We want all of our rights!" Martin Luther King, Jr. told a throng of people gathered in and around Detroit's Cobo Arena on June 23, 1963. He was speaking at what he called the largest and greatest demonstration for freedom ever held in the United States. "We want them here, and we want them now!" he said.

Fifty years ago this August, King gave the iconic "I Have A Dream" speech at the March on Washington. But the first time King spoke of his dream of equality and brotherhood between the races, was earlier that summer in Detroit.

Parts of King's Detroit speech may sound familiar to those who have heard the address he gave at the March on Washington. But the Detroit speech was tailored especially for a city with a long history of Civil Rights activism.

"I have a dream this afternoon, that one day, right here in Detroit," King said, "Negroes will be able to buy a house or rent a house anywhere that their money will carry them, and they will be able to get a job."

Organizers of "The Walk to Freedom" wanted to speak out against the brutality that Civil Rights activists faced in the South. They also wanted to address the inequities in jobs, housing and education faced by blacks in the North. King's speech dealt with it all.

"I have a dream this afternoon ... that one day little white children and little Negro children will be able to join hands as brothers and sisters," King said.

King gave his Detroit speech just two weeks after NAACP field secretary Medgar Evers was assassinated. His speech also came on the heels of protests in Birmingham, Ala., where police chief Bull Connor ordered police to use fire hoses and dogs to break up demonstrations.

"Before the victory is won, some like Medgar Evers may have to face physical death," King told the Michigan crowd. "But if physical death is the price that some must pay to free their children and white brothers from an eternal psychological death, then nothing can be more redemptive. 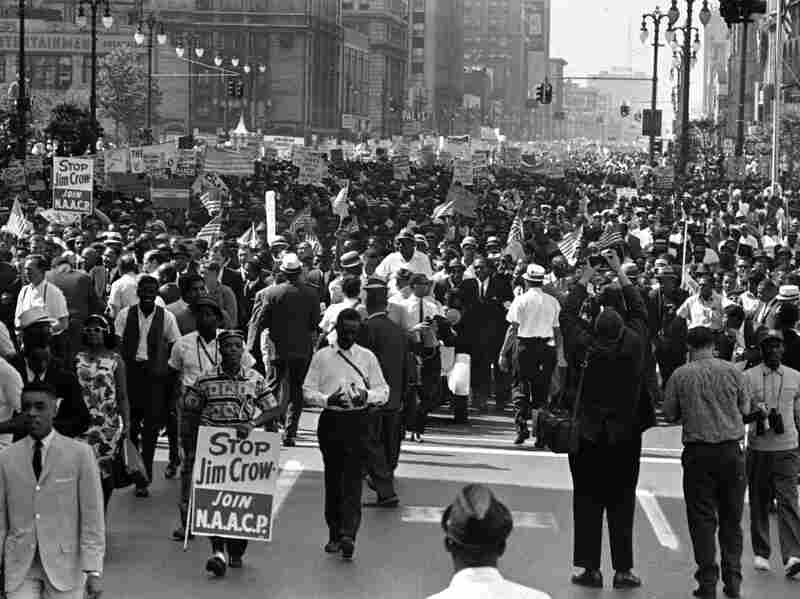 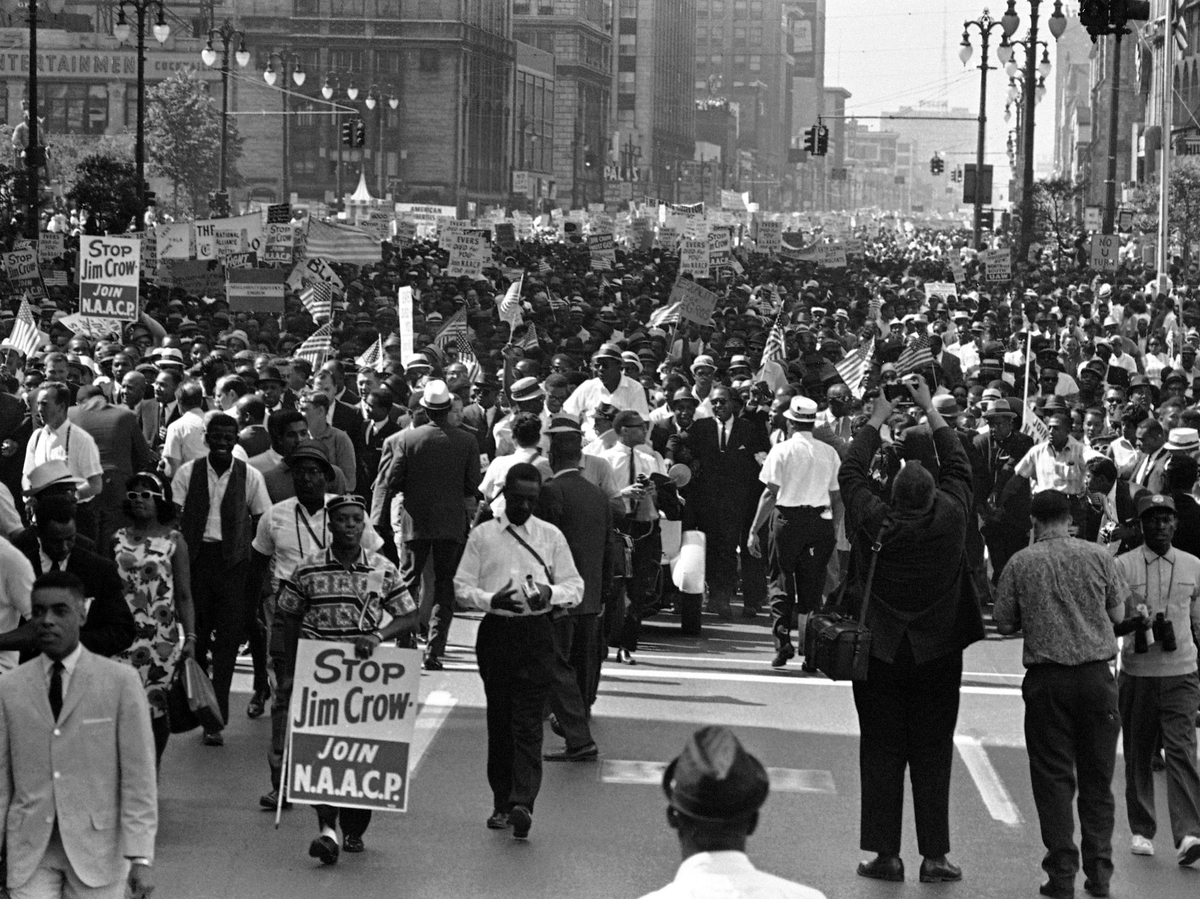 Martin Luther King, Jr., leads thousands of protesters along the streets of Detroit on June 23, 1963.

Boggs said King's address spiked the Civil Rights movement in the city. People there remember it not so much for the speeches, but for the organization and the way it brought the whole state together.

"It really changed conditions in the city," Boggs said.

Gloria Mills was just 14 in June 1963, but she was there the day more than 125,000 people streamed down Woodward Avenue.

"It was just thrilling," Mills recalled, adding that they piped King's voice out of Cobo Arena all around the river area so the people outside could hear. "I can still feel the chills from listening to that man speak because of the timing and then his leadership.

"We just knew we were on the precipice of something very, very important."

Lonnie Bunch, director of the Smithsonian's National Museum of African American History and Culture, said King often tried out themes for his speeches. Not only did he give his Detroit speech in June, but he also gave a similar one in Newark, N.J., in January 1963. Bunch says King knew it was critical to have the right tone. And by the time it came to the March on Washington, King knew exactly the rhythm he wanted and the story he wanted to tell.

"While there's something wonderful about imagining it as if it sprung from the head of Zeus, it really is part of long months of work and study just to get it right," Bunch said.

At the University of Michigan in Ann Arbor, Stephen Ward, a professor of African-American history, said people shouldn't think of King's speech in Detroit as a preview of his words at the March on Washington. Ward, who specializes in the Black Power movement of the 1960s and '70s, says the Detroit and Washington speeches are not the same.

"I think he was giving a speech for each context," Ward said. "In (Washington) D.C., he's speaking to a national audience, in the nation's capital, trying to push the civil rights legislation."

Like many preachers, and Civil Rights activists, Ward says King would use some of the same language and ideas in different places. And he believes the way most people think about the March on Washington — and the speech — is limiting.

"It was his March on Washington speech," Ward said, "which included the 'I Have a Dream' oration and idea which he gave at least in Detroit and probably a few other places, because those are the things he was thinking about and he was communicating and sharing."

The NAACP in Detroit and UAW-Ford sponsored a 50th anniversary celebration of the "Walk to Freedom."

Detroit NACCP President Rev. Wendell Anthony said the march and a series of workshops were about trying to continue King's work against violence, racism, voter suppression and the inequities in employment that continue to plague his city.

"Dr. King was about bringing folk together," Anthony said. "So that fact that we leave him on the mountaintop dreaming is our fault. He wouldn't want to be there. He wants to be back down in the valley working."