Accessibility links
Report: Walter Mosely, Author Of 'Little Green' And 'Devil In A Blue Dress' : Code Switch Six years ago, the mystery writer sent Easy Rawlins off a cliff, seemingly killing him. Now, Easy's back on the streets his creator once called home. Mosley says other than Los Angeles, he and his detective hero don't have much in common, but NPR's Karen Grigsby Bates begs to differ. 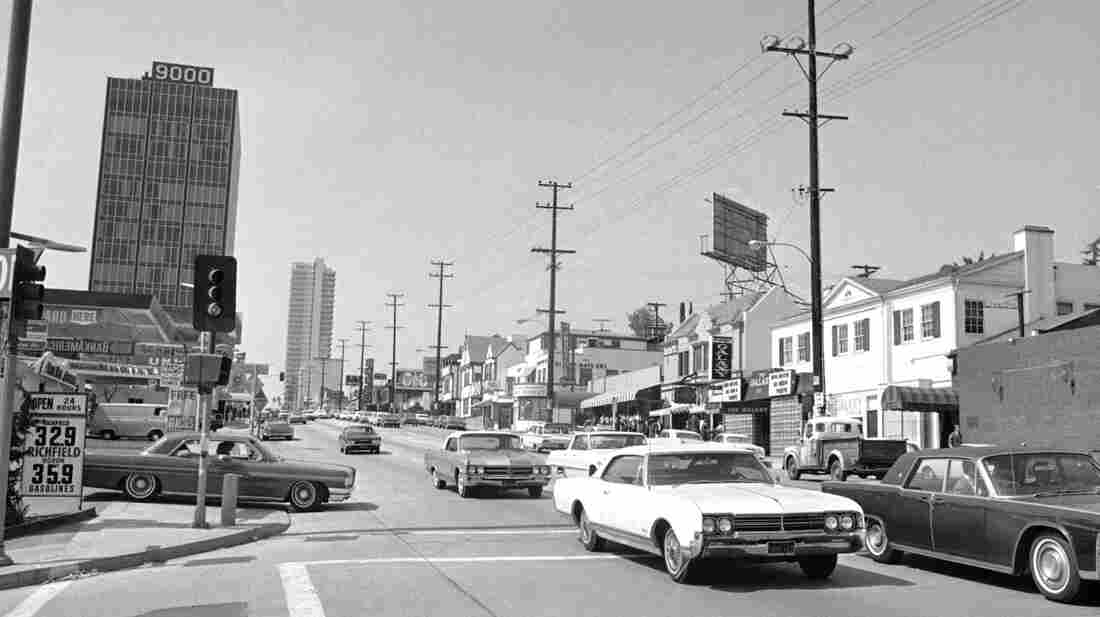 Little Green opens in 1967 and follows Easy Rawlins' search for a young man who disappeared after visiting the Sunset Strip, seen here in 1966. HF/AP hide caption 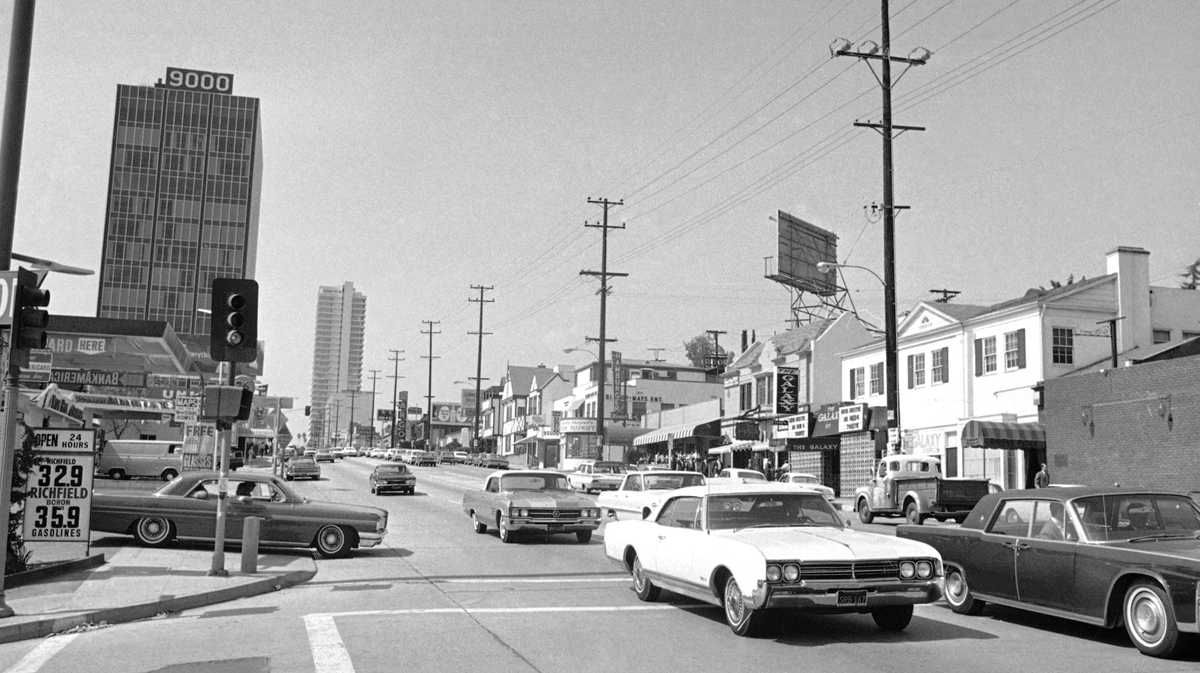 Little Green opens in 1967 and follows Easy Rawlins' search for a young man who disappeared after visiting the Sunset Strip, seen here in 1966.

Walter Mosley fooled us: We thought he'd killed off Easy Rawlins, the protagonist of his much-loved series. But it turned out Mosley just needed a break from the work — a long break. Six years later, in May, he came back with Little Green, possibly the best Easy Rawlins to date. Like the rest of the books in the series, it's strongly influenced by Los Angeles, the city that helped shape Mosley himself.

More From NPR's Crime In The City Series

When Easy first reappears in Little Green, it's 1967 and he has recently driven off a Malibu cliff. His violence-prone best friend, Raymond Alexander (Mosley fans know him as Mouse), brought him back, barely alive. Once the detective hero has partially recovered, Mouse asks him for a favor: He wants Easy to find a kid named Evander Noon, aka Little Green, who left home to hang out with some hippie kids and hasn't been seen since.

Easy meets up with Evander's worried mother, Timbale, in a scene that's classic Mosley: "Her eyes were wide and her fists trembling. Timbale wore a shapeless purple dress that had probably been stitched in Mexico, smuggled into Southern California and sold downtown replete with fake tags." With just a few words, Mosley shows that Timbale has little money and even less time for fashion. She's wearing a badly constructed knockoff dress that's been made by one set of poor people across the border, and sold by another set in Los Angeles.

Heading east from his hotel in the Westwood neighborhood, toward Easy's part of town, Mosley explains that the Easy Rawlins books are set in Los Angeles because, at the time, black people looking for work could find it in Southern California.

Denzel Washington's Easy explains the trend in the 1995 film version of Mosley's Devil in a Blue Dress: "Like me, a lot of colored folk from Texas and Louisiana had moved out to California to get them good jobs in the shipyards and the aircraft companies." 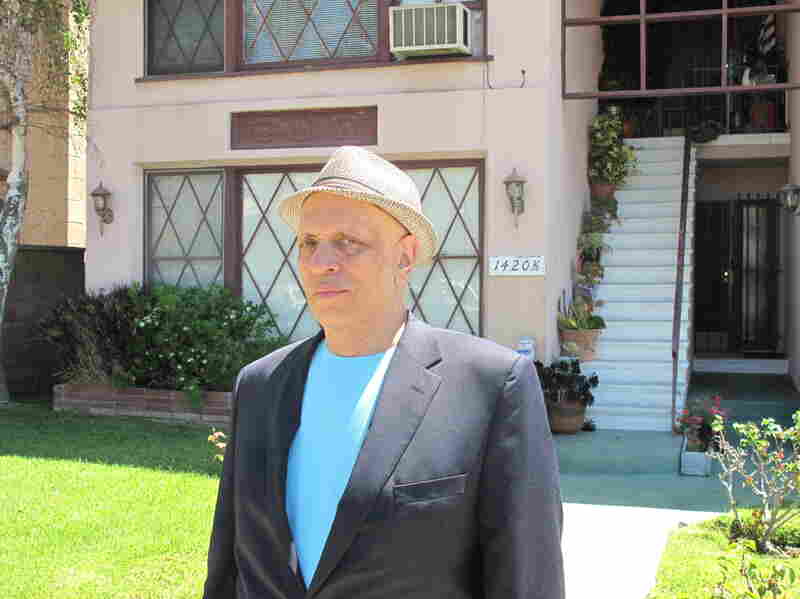 Walter Mosley stands in front of the house his parents owned, near the Pico-Fairfax neighborhood in Los Angeles. Many of the landmarks he knew as a child find their way into his books. Sam Sanders/NPR hide caption 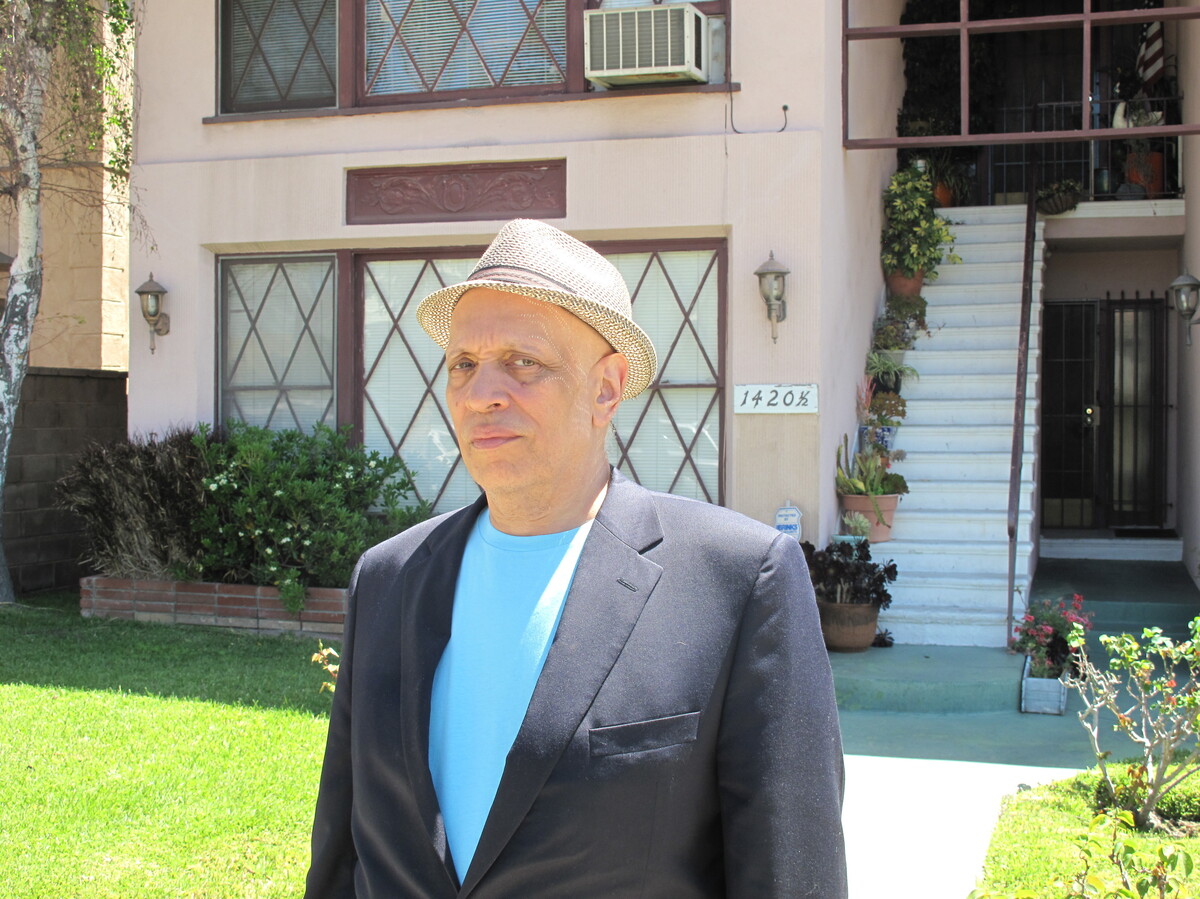 Walter Mosley stands in front of the house his parents owned, near the Pico-Fairfax neighborhood in Los Angeles. Many of the landmarks he knew as a child find their way into his books.

Mosley did just the opposite: He was born in Los Angeles, but left the city decades ago for New York. And while he and Easy may have gone in different directions, the character and his creator each wanted the same thing — more freedom and more opportunity to live his life as he saw fit.

"One of the reasons that I left Los Angeles is because I was oppressed by the feeling that how I lived — who I lived with, where — was going to define my entire life," Mosley says.

Mosley and Easy also see the city through the same lens, as a place that's constantly filtering and separating the vast majority of the have-nots from the slim number of haves. Mosley says LA's topography reinforces that separation, keeping poor and working class neighborhoods isolated from better-off parts of town. The boom years that put so many shiny, high-rise offices and apartments on the city's Westside didn't touch the parts of town Mosley and Easy know best, like South LA. In fact, Mosley says, "A lot of LA hasn't changed at all."

At least, not outwardly. The small houses and businesses in South Central LA and in neighboring Watts look very much as they did when Easy first arrives in the 1940s, back when the city's black community was thriving. What's changed, Mosley says, is who lives inside, thanks to a racial and ethnic turnover that is quintessentially Los Angeles:

And that's not the only thing that's changed. Mosley doesn't usually have use for a car in New York, but he remembers how good it felt to drive in LA. He writes about it in Little Green: "L.A. at night, back in the sixties was a wonderful place to drive. There were lots of people but it wasn't overcrowded. The avenues and boulevards were wide and open to free-flowing traffic." 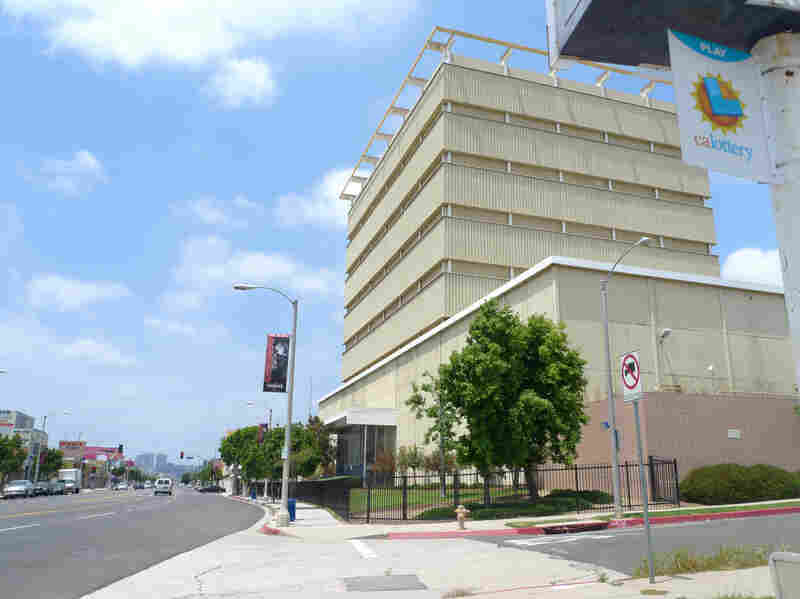 The office building at the intersection of Pico Boulevard and Genesee Avenue actually covers a working oil pump (note the lack of windows). Courtesy of Noah Albert hide caption 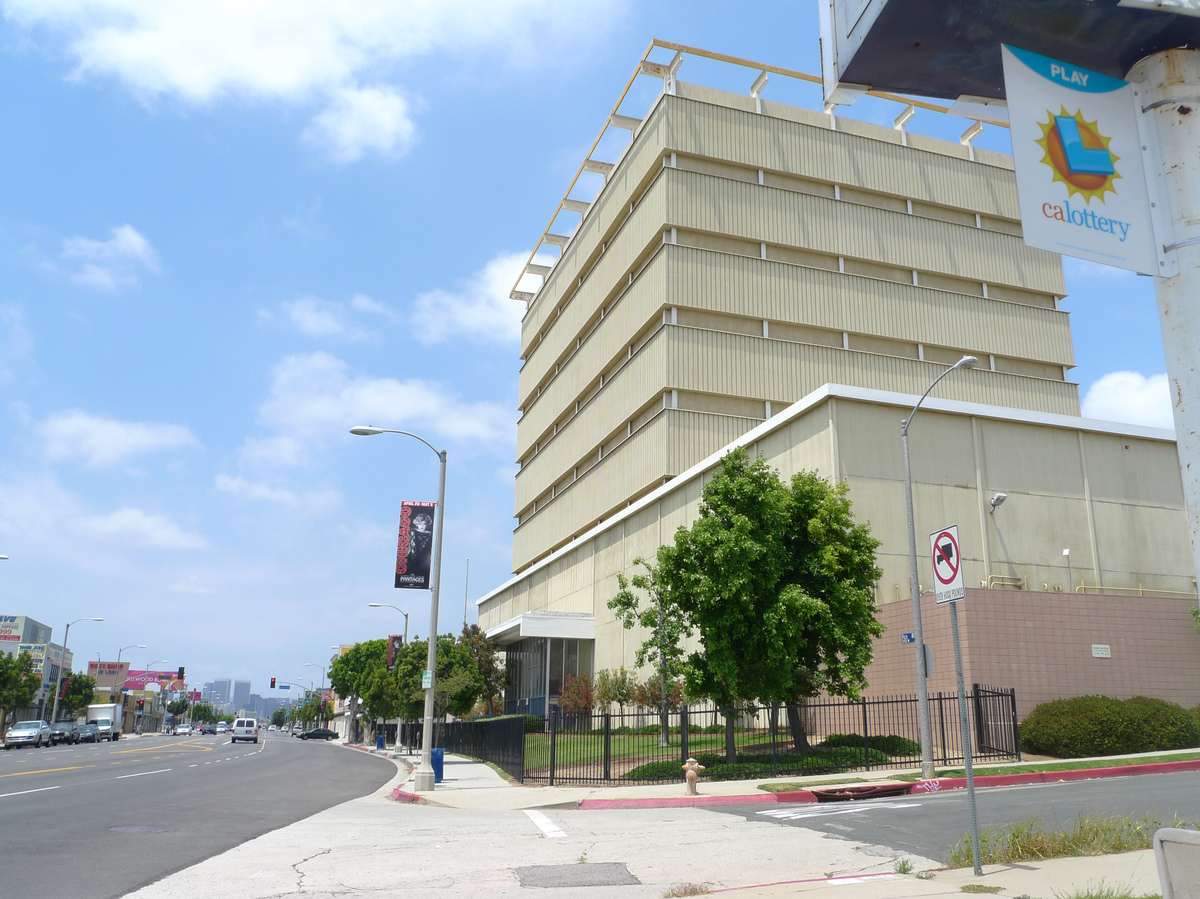 The office building at the intersection of Pico Boulevard and Genesee Avenue actually covers a working oil pump (note the lack of windows).

Today, LA's "free-flowing traffic" is a thing of the past.

Back In The Neighborhood

Mosley still knows LA's streets well enough to act as a flesh-and-blood GPS. He heads to the middle of the 1300 block of Genesee Avenue, just north of Pico Boulevard. Genesee is a quiet street, shaded by big trees. Mosley pushes back his straw fedora, spreads his arms wide and breathes in the fragrance of freshly cut grass.

Just a block away, Pico Boulevard is noisy, painfully sunny and scented with exhaust from the buses rumbling past. "When I was a kid in the '60s up until the '70s ... Pico was the dividing line," Mosley explains. "Mostly, black people didn't live above it and, like, a good percentage of black people lived below it."

Some of the landmarks here show up in his books, like a working oil well disguised behind the facade of a high-rise office building. "This is that giant oil well that Easy is always talking about," Mosley says. "It's been here since I was about 14."

This part of the city is criss-crossed with unnamed alleys, one of which Mosley uses as the location of Cox Bar, an illegal drinking establishment in his novels

Easy's own house is here, too. At the beginning of Little Green, Easy is convalescing in a Bel-Air mansion owned by a friend. "When he got out," Mosley says, "he comes back home, to this block, and a white guy has squatted in his house."

With some help from his lethally inclined buddy Mouse, Easy evicts the squatter. Mosley says, with some understatement, "It was Mouse, so it wasn't a gentle dislodgement." 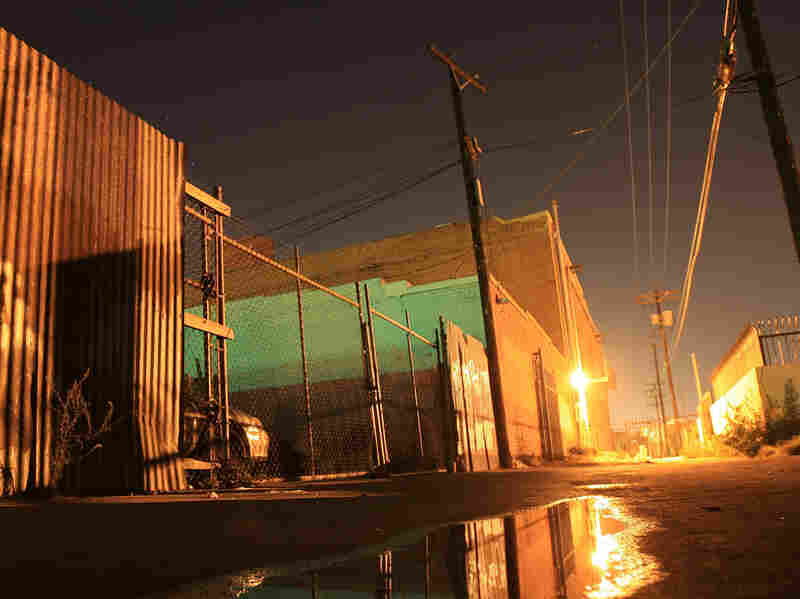 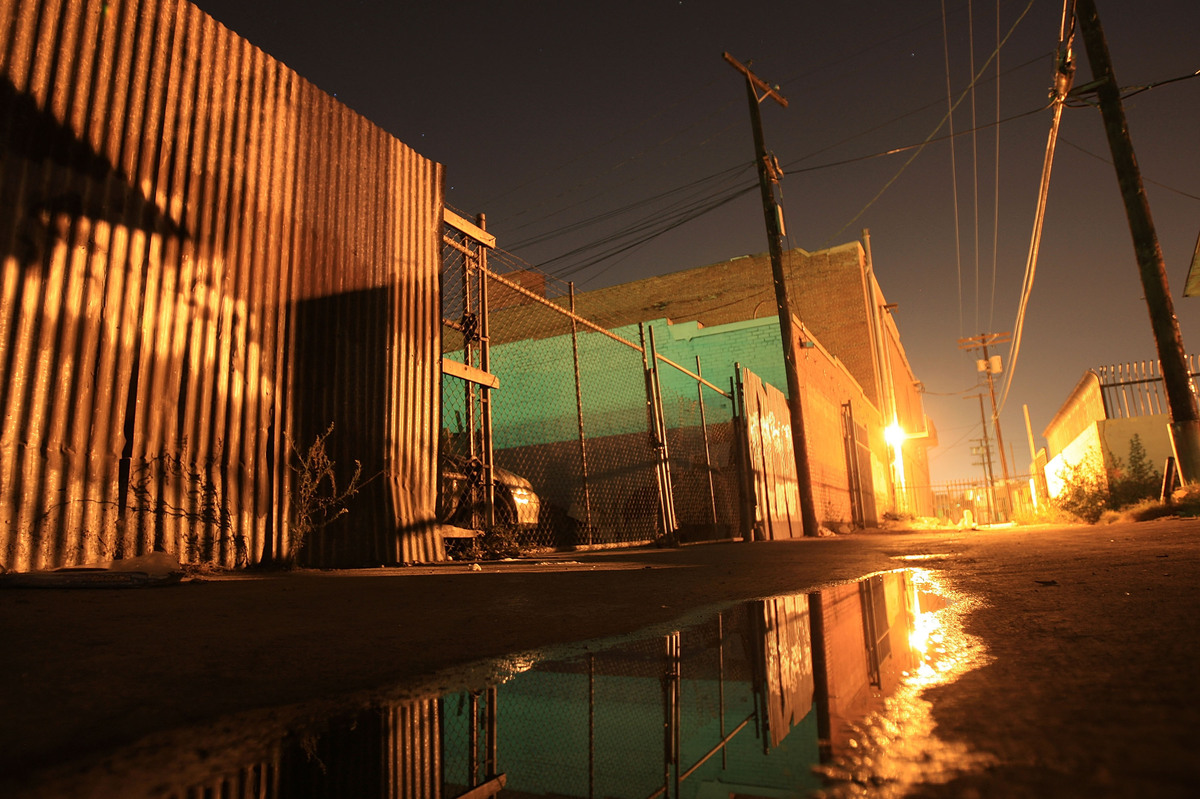 Where Walter And Easy Intersect

There's a lot of LA in Little Green, from the street carnival that was Sunset Boulevard during the mid-'60s to a forested lot in Compton, behind which is the carefully hidden home of a root-working healer named Mama Jo. (Her concoction gave Easy the strength to hunt for Little Green.)

Mosley has walked a couple of miles now on a lot of the streets he knew intimately as a teenage boy. He prepares to leave, but before he goes, there's a little surprise: He stops in front of a pink fourplex with fancy, diamond-paned windows.

"This is the house my parents owned, the front and the back," he explains. "We lived in the back. It's a great place — I love it!"

And it's just around the corner from Easy's house. Once again, Easy Rawlins and Walter Mosley intersect. If you ask Mosley how much he and Easy have in common, he pauses before answering, "Other than Los Angeles, I don't really know."

But it's no mystery to this reporter: Walter Mosley and Easy Rawlins share a passion for social justice and a plain-spoken eloquence that makes people pay close attention to what each man is saying.

Read an excerpt of Devil in a Blue Dress

Easy Rawlins and the Unbearable Sadness of Being Oct. 10, 2007