Accessibility links
Are HBCUs In Trouble? An Evergreen Question : Code Switch Some tough news about several historically black colleges has prompted folks to wonder if they're viable and necessary — questions that sometimes simplify their strengths and challenges.

Are HBCUs In Trouble? An Evergreen Question

Are HBCUs In Trouble? An Evergreen Question 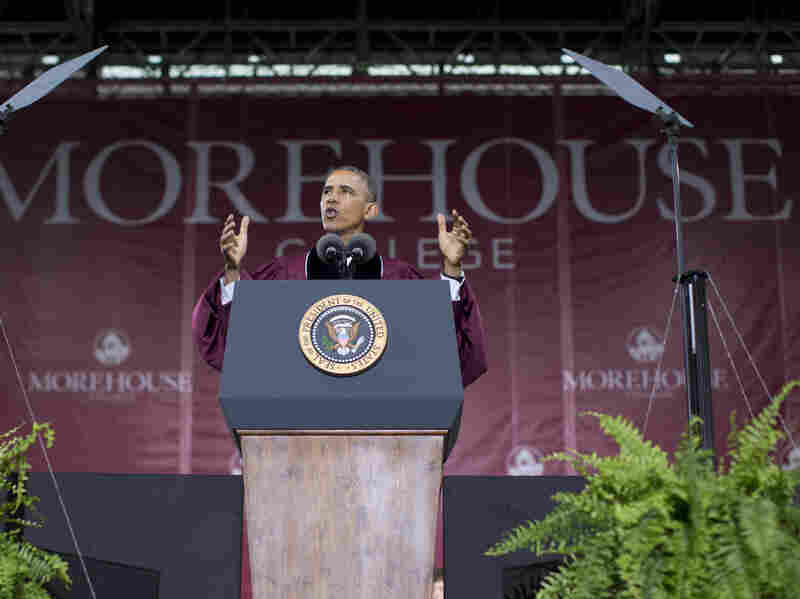 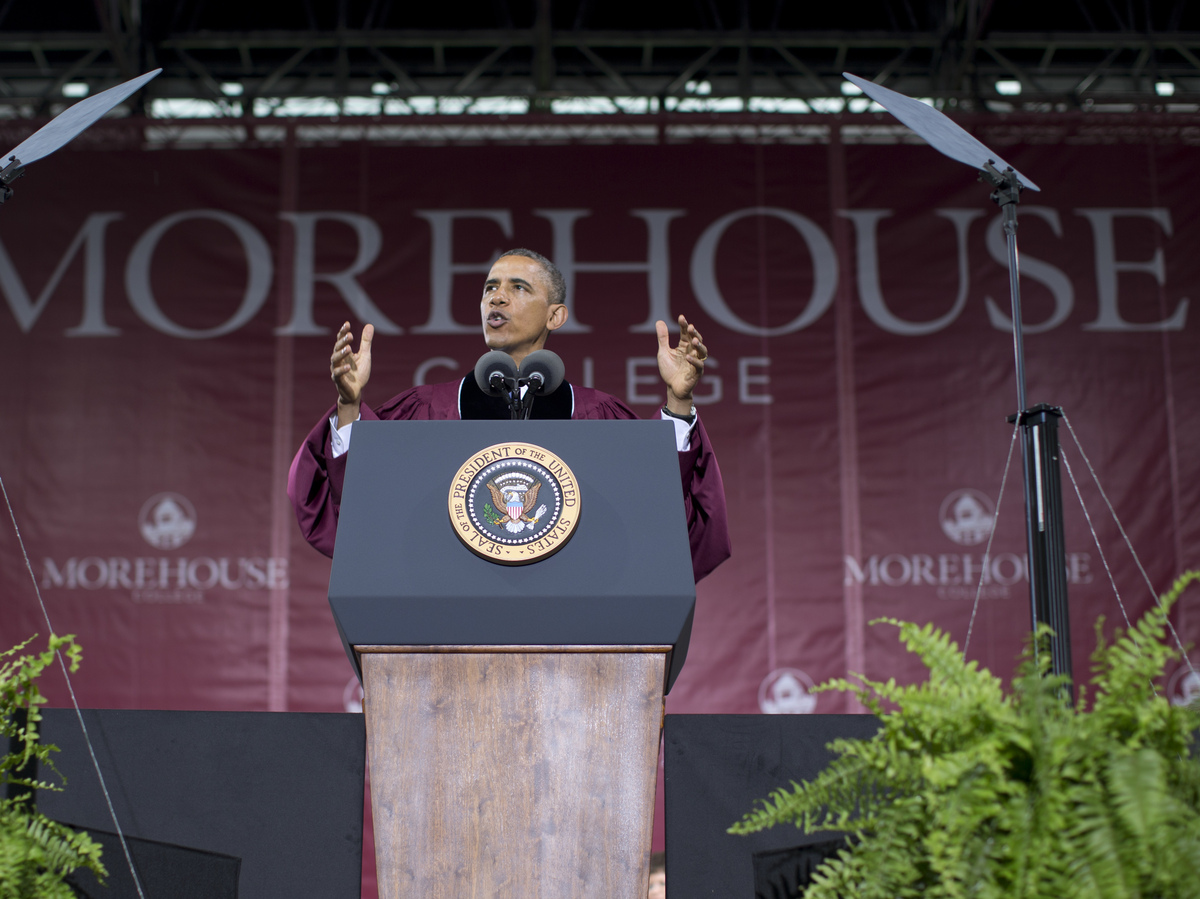 Earlier this month, St. Paul's College, a tiny, 125-year old liberal arts college in southern Virginia, quietly announced that it was throwing in the towel and would be closing its doors at the end of June.

The 600-student college had been struggling for years to find funding and to remain in good standing with the accrediting body that governed it. But St. Paul's president said that its plan to merge with another unnamed historically black college or university (HBCU) had suddenly and unexpectedly imploded, leaving the school's board of trustees with few options.

The news of St. Paul's closing came around the same time that a board member at Howard University, another historically black institution, wrote a much-discussed public letter warning about the school's dire financial straits. The school was hemorrhaging money, the trustee said. Its student body was shrinking. "Howard will not be here in three years if we don't make some crucial decisions now," she wrote.

These events come amidst a flurry of questions about the educational opportunities available to black students. Just this week, the Supreme Court issued its ruling in a major case on affirmative action in higher education, asking a lower court to reconsider the legality of the University of Texas's admissions policies.

For decades, folks have been asking: is affirmative action still necessary? And they ask the same questions of HBCUs: have black colleges outlived their usefulness?

St. Paul's and Howard are very, very different. While St. Paul's impending closure was greeted by people saying they'd never heard of the school, Howard is probably the most prominent HBCU in the country and it boasts an army of famous alumni (and alumni, famous and otherwise, who are very, very vocal about their alma mater). If Howard was in trouble, folks wondered, were any black colleges safe?

Marybeth Gasman, a professor who studies education policy at the University of Pennsylvania, has been studying HBCUs for years. She said that these questions about the viability and usefulness of HBCUS are as old as the idea of HBCUs themselves. She pointed to a recent Washington Post article with the headline "Is Howard University at a Crossroads?" as an example. "Every few years, HBCUs are a crossroads," she said. (We spoke on the phone, but the eye-roll was heavily implied. Headlines from 1993 and 2002 illustrate her point.) "The first thing that happens is that when a school gets into financial trouble, people say 'Oh, no, HBCUs are going down the drain.'"

Gasman said she looked at 300 articles about black colleges published between 2000 to 2003, and found that the articles tended to be negative.

There are negative signals for HBCUs, to be sure. But the picture is more complicated than those signals alone would indicate. And in some areas, HBCUs are making serious advances.

The aforementioned trustee's letter garnered lots of unwanted attention to Howard, which has watched its enrollment slide in recent years. Even in better economic times, the students that HBCUs serve are often the first in their families to attend college and they have less wherewithal to pay for college. But new, stricter rules on awarding loans have put HBCUs and their students in a tighter bind.

That's hit Howard, which also spends a significant part of its revenue on its teaching hospital, especially hard. Twenty-one percent fewer students are receiving federal loans at Howard — which shakes out to about $7.5 million in real dollars. And since HBCUs have relatively small endowments, they can't be as generous with scholarships.

HBCUs have long struggled to find stable avenues of support. "HBCUs have always been in a situation where a lot of them have had to struggle. a lot of that had to do was inequitable fundings," Gasman said. "I like to be very blatant about it and say that it's a product of American racism."

After Brown v. Board of Education, deep-pocketed white philanthropists cut off their financial support for black colleges because many felt those institutions would be unnecessary in the putatively integrated new America. But predominantly white colleges were slow to integrate, and black colleges suddenly had fewer resources to tap.

Today, HBCUs like Howard sit in proximity to a huge pool of unexplored funding — alumni giving. But black colleges have had an especially rough time getting their alums to open their wallets for socioeconomic reasons such as relative wealth, Gasman said. She said the reason many people give for not supporting their alma maters is that even alums who love their schools don't necessarily trust them with their money. Why? Walter Kimbrough, the president of Dillard University in New Orleans, chalked it up to a "Bermuda Triangle" of unpleasant if not counterproductive experiences at their schools registrar's office, the business office and financial aid offices that leave graduates feeling that their universities are poorly run.

The red tape and logistical headaches of handling administrative issues are well-worn tropes of the HBCU experience. At Howard, the "A building" is notorious. President Obama even joked about it at Morehouse's commencement in May. "I know that some of you had to wait in long lines to get into today's ceremony," he said. "And I would apologize, but it did not have anything to do with security. Those graduates just wanted you to know what it's like to register for classes here."

"Overall, HBCUs have to work on their administrative mechanisms that frustrate their alumni, but you have to be customer service-focused," Gasman said, while adding that cash-strapped institutions have a harder time ameliorating these problems. But that administrative jankiness also means that many HBCUs simply aren't particularly good at following through on their fundraising aims. "[HBCUs] have got to invest in fundraising so people can go out and raise the funds they need."

But many are trying, and some are succeeding. Howard's alumni giving rate was a paltry 4 percent in 2008; they've quadrupled it to 16 percent in 2012. Spelman College in Atlanta and Claflin University in Orangeburg, S.C., both having alumni giving ratios in the mid-forties and climbing, and are racing to become the first HBCUs to hit the 50-percent mark — a number that would rival some Ivies.

A Tough Marketplace For Colleges

St. Paul's will be the latest HBCU to shut down, but the last several decades have seen several others cease operations. Prentiss Institute and Bishop College both closed in 1988. Mary Holmes College shut down in 2004. Morris Brown College in Atlanta has been on life support for years, and recently rejected an offer from the city to eliminate its crushing debt, and faces a longshot bid for survival.

But while small HBCUs are struggling to stay afloat (see the aforementioned obstacles to fundraising), they're also being buffeted by the same financial challenges that are buffeting mainstream institutions. "Students these days want everything," Gasman said — like state-of-the-art facilities and lifestyle amenities — "and a lot of small liberal colleges don't have a large endowment, [so] they can't compete."

"If you're a small liberal arts college, you have to have something you're really good at it," she said. "I don't think it has a lot to do with black colleges, per se."

And just as St. Paul's is shuttering, another institutions is joining the HBCUs. American Baptist College in Nashville, Tenn., with a student body around 150, became the 106th school with that designation earlier this month. The federal government designates any institution founded before 1964 "whose principal mission was, and is, the education of Black Americans" as an HBCU, making those institutions eligible to receive federal funding. Some institutions that saw their student bodies become primarily black after 1964, like Chicago State University, aren't eligible. (Conversely, Bluefield State College in West Virginia, which earned the HBCU designation in the 1960s still retains that designation even though its student body has been about 80 percent white for decades.)

If you look at the numbers, they can be kind of jarring: aside from more well-known schools like Spelman and Howard, most HBCUs have six-year graduation rates below 50 percent. According to the Journals of Blacks in Higher Education, 24 black colleges saw only a third of their graduates earn a bachelor's degree.

But Gasman said that so much of this is a function of demographics. [What HBCUs] have at their core is a dedication to low-income students," she said. "That makes it harder to have higher graduation rates" — HBCUs students face financial pressures outside of college and so they have narrower margins of error. "If you're doing that kind of work, you're dealing with low-income students, you're tuition-driven, your alumni are not making enormous salaries and you're dealing with racism, it's a difficult situation."

But as low as those graduation rates may be, the numbers at many HBCUS are still higher than the national average for black graduations. The Journal of Blacks in Higher Education recently took a look at 41 institutions, and found that more than half those HBCUS saw their graduation numbers tick up over the last 15 years, and 10 of those schools saw increases in the double-digits.

And in the aggregate, HBCUs, small and underfunded as they may be, are still doing a lot of higher lifting for blacks in higher education: one in five African-American college graduates earned their degrees at HBCUS; black colleges graduated nearly all black students (90 percent) who earned bachelor's degrees in STEM fields between 2006 and 2010; black colleges produce half of all black public school teachers, half of all future lawyers and eight in 10 black judges.

The popular conversations around HBCUs tend to get flattened into debates over whether they should exist, and those conversations have remained frozen in time for the last half-century. But the fact that we keep returning to these conversations illustrate just how hardy these institutions have been and how attractive they remain for black folks looking to gain a foothold in the middle class.

"I always like to say that HBCUs are just as diverse as the rest of institutions of higher education," Gasman said. They have different individual histories, pull from different applicant pools in different regions, and have distinct strengths and challenges. "The thing they have at their core is a dedication to low income students. It's a noble, noble goal that a lot of [mainstream] institutions don't want to have anything to do with."

A previous version of this story said Claflin University was located in Atlanta. In fact it is in Orangeburg, S.C.