Accessibility links
Moscato Finds A Younger, Hipper — And Browner — Audience : Code Switch This sweet sparkling wine has been a hit with people of color ever since it started being name-checked in rap songs. The popularity has winemakers eager to reach this new group of customers 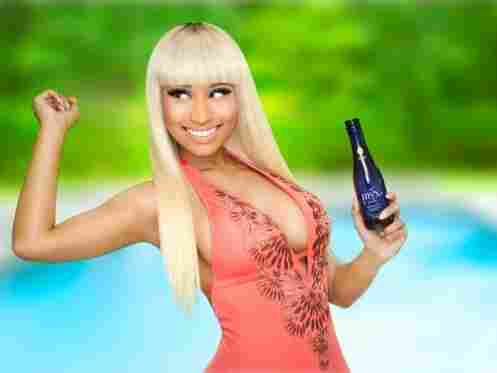 The wine of the moment — well, the past few years, actually — has been moscato. And its rise has been astronomical.

"I've been following the wine category for over 10 years," says Danny Brager, the senior vice president of beverage/alcohol practice at Nielsen. "Frankly, I haven't seen anything like it at all."

Nielsen doesn't just track TV; Brager's group follows retail wine sales. According to Brager, the number of moscato brands has doubled in the past three years — and it's not over yet. Sales of moscato will keep growing, he says, at about 25 percent a year.

But almost all of the big press about moscato and its newfound fame seem to forget one thing about the wine and its consumers: race.

Brager says one would typically describe the average wine drinker as older, white and upper-income, and they are equally split by gender. Not so with moscato drinkers.

"Much more African-American," says Brager. "Much more Hispanic, much younger, much lower-income, much more female."

Brager says African-Americans are three times more likely to drink moscato than some other table wine.

That's believable, especially if you listen to hip-hop. As long I can remember, some rapper has been name-dropping some type of alcohol in his or her song. For a while it was the champagne Cristal. I distinctly remember the liqueur Hypnotiq being big when I was in college, and ciroc vodka is trending a bit right now. But moscato has trumped them all.

Lil' Kim is believed to have first rapped about it in 2005: "Still over in Brazil sippin' moscato, ya must have forgot though, so I'mma take you back to the block yo."

But Drake gets most of the credit for putting moscato on the map, in a song from a 2009 mixtape. The lyrics include the line: "It's a celebration — clap clap bravo. Lobster and shrimp and a glass of moscato."

After that, it became a hip-hop staple, name-dropped everywhere. Most recently, the wine was featured prominently in the chorus of a Waka Flocka Flame song ("I'mma sip moscato, and you gon' lose them pants"), as well as in one featuring Kendrick Lamar.

Moscato even found its way into the world of reality TV. For a while, NeNe Leakes of the Real Housewives of Atlanta was pushing her own brand, Miss Moscato.

It's unclear how moscato got so big with hip-hop — and black people — so quickly. The New York Times traced the origins of the affinity to comments that Cristal champagne's managing director made in an interview with Esquire. Asked whether Cristal's association with a "bling lifestyle" might hurt the brand, he said, "That's a good question, but what can we do? We can't forbid people from buying it." Soon after, in 2006, Jay-Z started a Cristal boycott.

That would leave the perfect opening for a sweet drink like moscato to step into the hip-hop scene, no?

A Wine For The Uninitiated

But despite moscato's popularity, the strange thing about hip-hop's fascination with the beverage is that the wine is not at all high-end: It's a relatively cheap white wine made from the muscat grape. Some of the very best bottles can cost less than $50.

And moscato is really sweet and has low alcohol content. Sweet enough and weak enough, in fact, to make a wine drinker out of anyone, which is why winemakers love it so much. People who don't think of themselves as wine drinkers, who are intimidated by the idea of a wine tasting, who would never, ever try to search out "earthy tones" in a deep red — those people drink moscato, and they like it.

At the San Antonio Winery in Los Angeles one sunny Sunday afternoon, I found dozens of these moscato wine converts, like Quintasha Scorza.

Scorza first sampled moscato while she was working at an Olive Garden restaurant. After that, she was hooked. She was at the winery with a group of girlfriends — all black — celebrating one of their birthdays. All of the women in the group — and many of the people in the winery — were drinking wines like moscato. The wine drinkers are young; they're Latino, or black or Asian. And a lot of them are pretty new to this: Moscato is their gateway wine.

And the dealers have latched on — they're reaching out everywhere.

If you live in Los Angeles, you might have seen a billboard for Bartenura moscato. It advertises Bartenura as the official moscato of the Dodgers. It's kind of an odd pairing, until you think about the strategy at work.

Eric Arnold, an editor at Tastingroom.com and author of the book First Big Crush, says the ad isn't just about bringing in new people, but about taking them somewhere else.

"What you're seeing here is a wine company realizing that they can use moscato to turn people on to the other products that they sell," Arnold says.

The thought is, if you start out with moscato, at some point, your palate will mature and you'll start drinking other, more expensive wines — from those same winemakers.

Arnold predicts that even the rapper Drake's taste might change over time: "If we could build a time machine and go listen to a Drake song three, four years from now, I would be willing to bet you that he's long since moved on from moscato and he's singing to his girlfriend about Napa cabernet or burgundy or something like that."

Steve Riboli, vice president of San Antonio Winery, says that if moscato fans' tastes never change, that's fine. "I think we as an industry have been trying so hard to make everybody like dry wine for the last 50 years.

He hits on a good point. Over the course of my interviews for this story, a handful of wine experts wouldn't even be interviewed for the story. If you Google "moscato," very soon you'll find blog entries decrying the drink as "ghetto." As much as moscato fans like the drink, there's a certain snobbery that dismisses it altogether.

But people who like moscato really don't care. Moscato drinkers are loyal to their brand — so loyal that beverage makers are flooding the market with various moscato spin-offs. Beer and moscato-mixed drink recipes. Nicki Minaj-endorsed coconut moscato. Moscato-infused vodka? Yeah. That exists.

Riboli may be on to something: There is nothing wrong with sweet potato pie. Soon, there'll be a slice of it for everyone.