Accessibility links
How A Minority Biking Group Raises The Profile Of Cycling : Code Switch Minority cycling groups are forming all over the country. One in Washington, D.C., in particular, is trying to change the perception of just who is a cyclist. 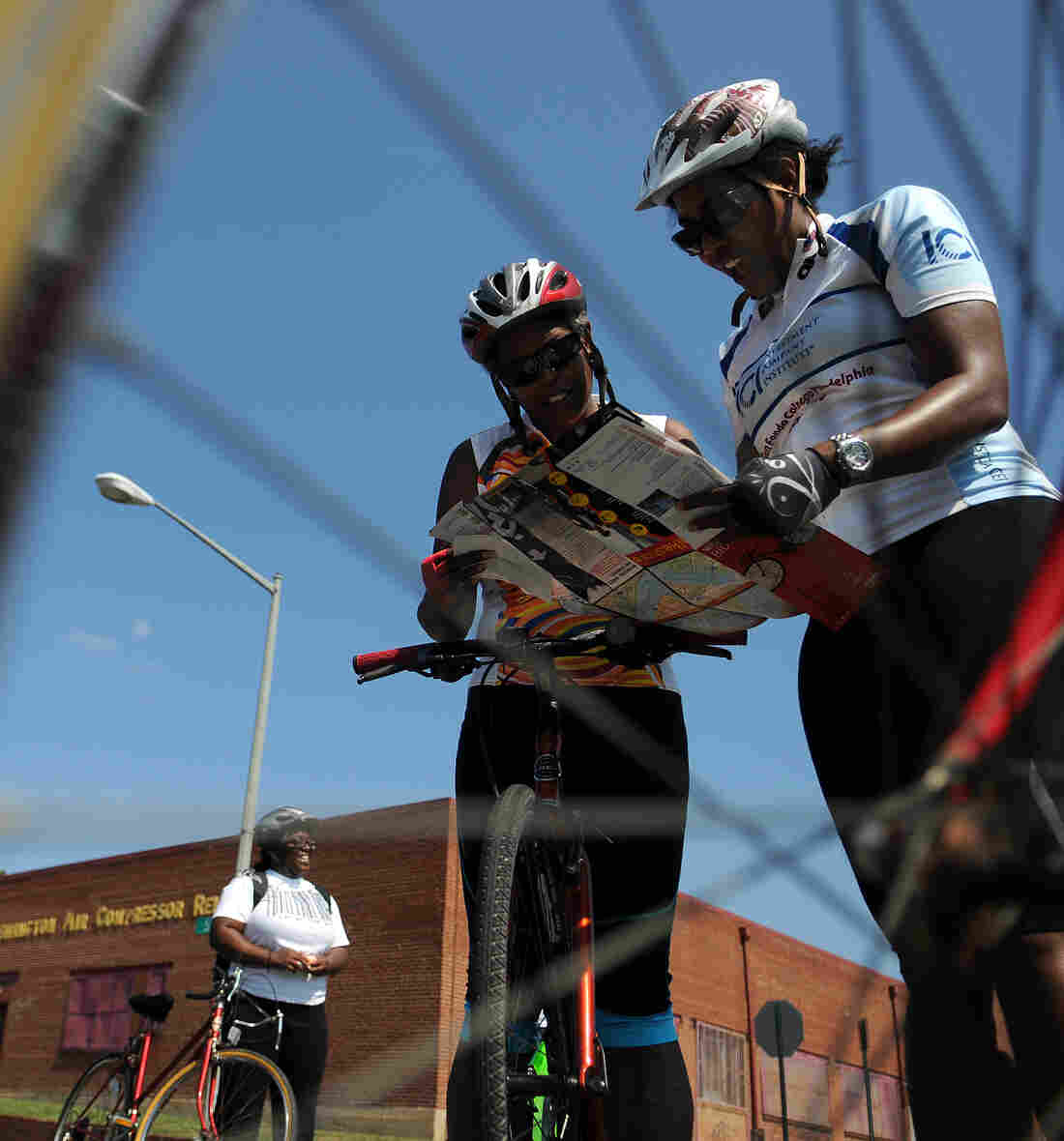 Members of Black Women Bike: DC consult a map while on the road at an event in June 2011. The Washington Post/Getty Images hide caption 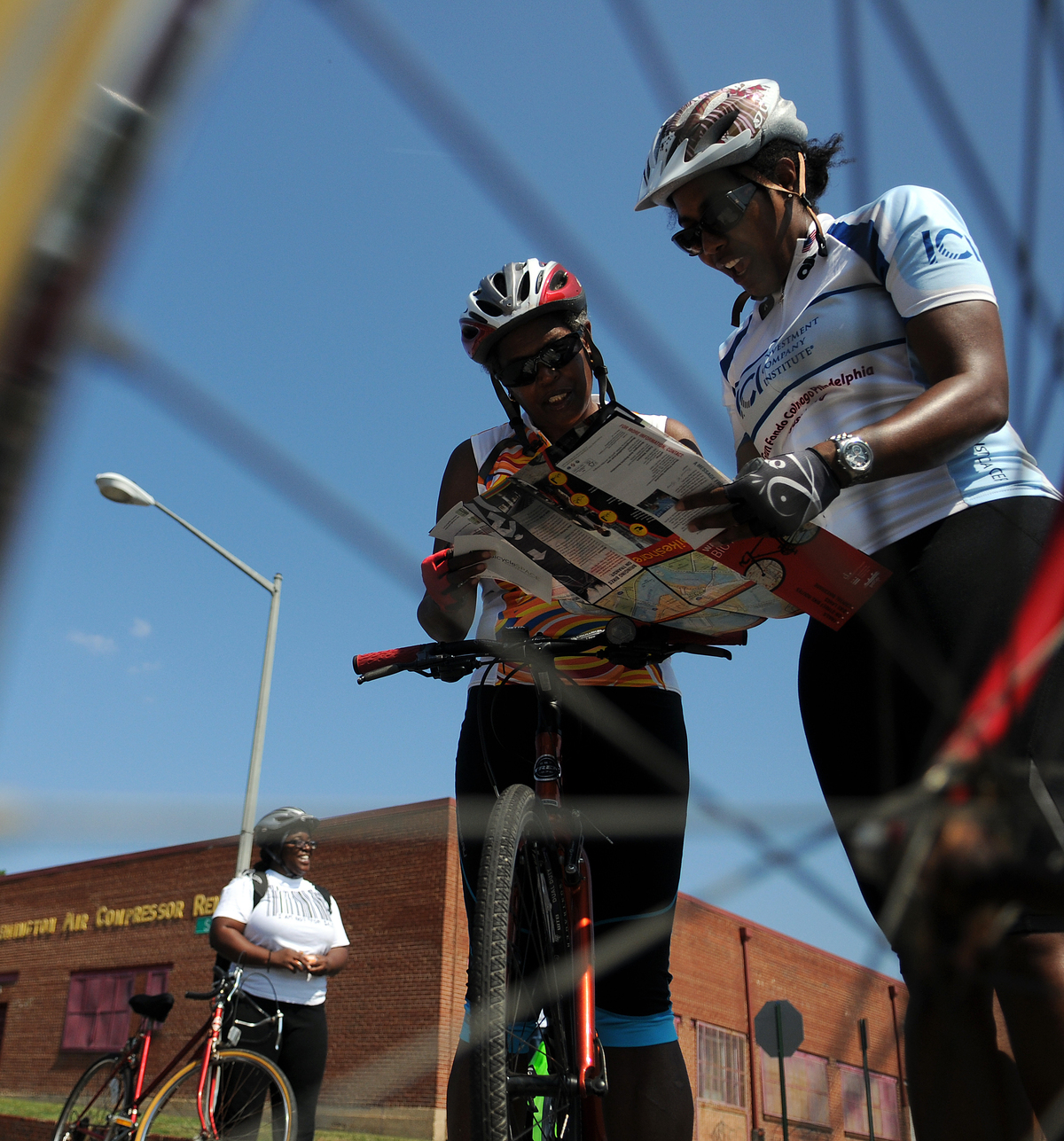 Members of Black Women Bike: DC consult a map while on the road at an event in June 2011.

Flip open any cycling magazine and you might think only skinny, good-looking, white people ride bikes. But increasingly that doesn't reflect the reality. Communities of color are embracing cycling. And as a fast-growing segment of the cycling population, they're making themselves far more visible.

There's a story that Veronica O. Davis likes to tell about why she started a cycling group for black women. She was pedaling past a public housing complex near her Washington, D.C., neighborhood one day when a young black girl shouted to her mother, "Mommy, mommy, it's a black lady on a bike."

"At first I was like, 'Why is she so excited?' And I realized I'm probably the first cyclist that she saw who looked like her," said Davis.

That one small experience led to a Twitter message, which then led to a Facebook group. Two years later and now 800 women strong, Black Women Bike: DC is a full-blown cycling movement. And it's not alone.

Minority cycling groups are sprouting all over the country. There's the National Brotherhood of Cyclists, We Bike NYC in New York and Ciudad de Luces/City of Lights in Los Angeles.

A recent report by the League of American Bicyclists cites people of color as the fastest-growing segment of the cycling population. Bicycle commuting rates in those communities are growing, too. The league's Hamzat Sani says that's not surprising.

"You'll see a lot of third-shift, late-shift folks or restaurant workers engaged in cycling because public transportation doesn't work when they get off of work. But those aren't the cyclists we'd see in a magazine, right?" said Sani.

With Black Women Bike: DC, Davis works to change the perception of just who is a cyclist. It's not just spandex-clad weekend warriors riding 30-speed carbon fiber bikes. It's moms who want to ride with their kids. It's women who are training for their first triathlon. And it's utilitarian commuters like her.

Davis bicycle commutes 10 miles to and from work nearly every day. Today's ride to downtown D.C. is a little breezy. Nothing she can't handle, though.

"People joined for different reasons. Some people joined with the message of, 'I thought I was the only one.' Or 'Hey, I've been thinking about biking but I didn't have anyone to bike with,' " Davis said.

Part of their mission is to make cycling more accessible, whether it's for fun, fitness or transportation. That means addressing big issues like cycling infrastructure and street safety, or more trivial personal issues like how to prevent helmet hair, which can become a barrier for some minority women.

"It's always a big issue. The secret to biking and having good hair is a satin scarf. It cannot be any other type of scarf. For a lot of black women, we sleep in satin scarves," Davis said.

More and more groups like Davis' are popping up around the country. These groups are part cycling club, part social movement. Sani recalls a group ride in Atlanta with Red, Bike and Green, an African-American cycling collective.

"It was very powerful to have a group, like 60 or 70 riders who were all black rolling through a predominately black community on a bike," Sani said.

In many inner-city neighborhoods, there aren't even bike shops — and cultural barriers remain. Sani has heard time and again from his peers in the black community that "black people don't bike."

"If you look at the history, it's just not true," Sani said. "And there are new groups emerging that are really pushing and changing the face of cycling as we see it."

Marc Sani, no relation to Hamzat, is the publisher of Bicycle Retailer and Industry News, a trade publication. "Primarily, cycling has been mostly a white sport, much like skiing in that sense," he says.

Regardless of roadblocks, groups like Black Women Bike: DC are trying to raise the profile of bike riding in minority communities. And as the number of black, Latino and Asian cyclists in this country grows, more riders will be able to see themselves reflected as they pedal around town.