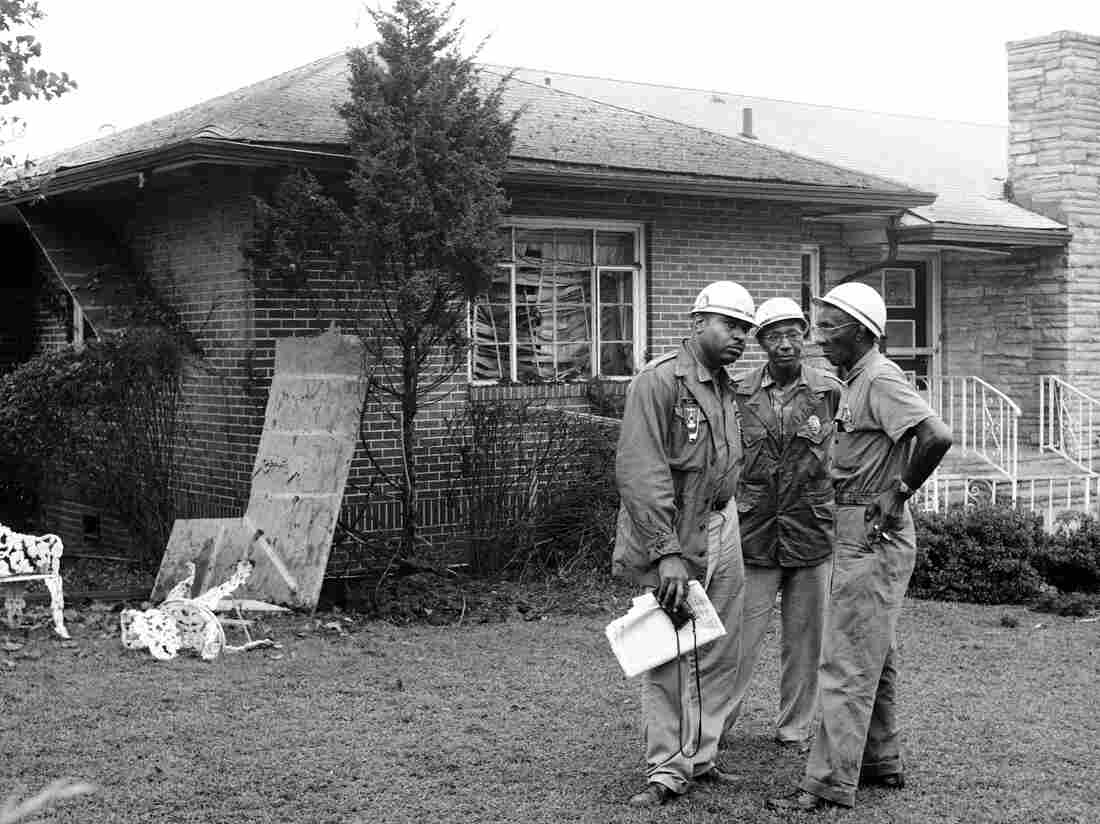 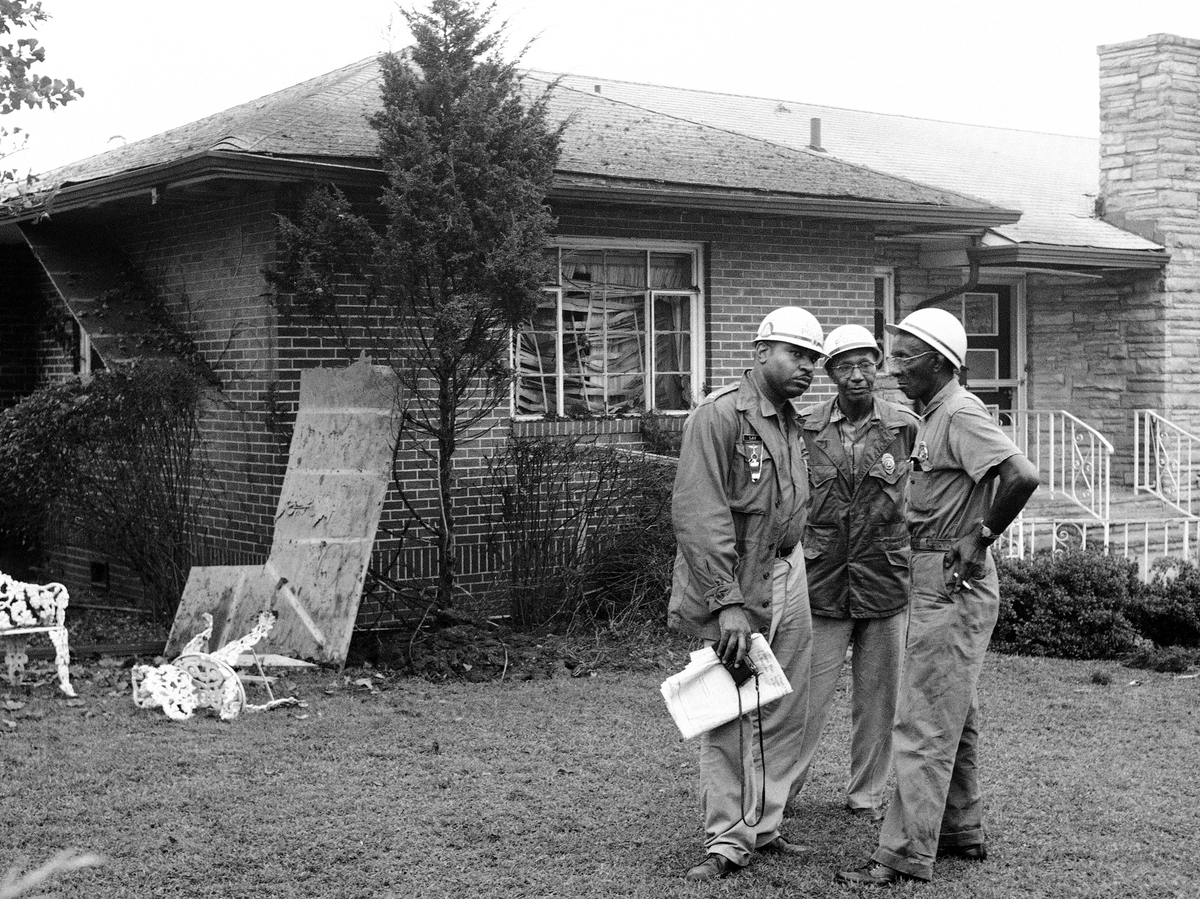 Long before the Civil Rights marches of 1963 thrust Birmingham, Ala. into the national spotlight, black families along one residential street were steadily chipping away at Jim Crow segregation laws — and paying a price for it. As part of our series looking back at the seminal events that changed the nation 50 years ago, NPR's Debbie Elliott paid a visit to Birmingham's Dynamite Hill.

In many ways, the story of modern Birmingham starts on Center Street, a leafy hill lined with neat brick ranch-style houses. In the 1940s, Center Street was the city's color line. To some, the west side was the white side and the east side was in transition.

Standing at the top of the hill, Jeff Drew remembers when the first black families tried to cross that divide.

"If you wanted to get a house on the west side of Center Street chances are you were going to have some resistance from white folks," Drew says.

But Drew's family, along with other up-and-coming black professionals, moved to the west side of Center Street anyway in a determined effort to take on one of the most segregated cities in America. At first, Drew says, the Ku Klux Klan would burn the doors of the houses that African-Americans moved into. Sometimes members of the Klan would fire shots into the dark of night.

"Those big cathedral windows were what were being shot at all of the time," Drew recalls.

And then there was dynamite. Drew says they knew a blast was coming when they heard decommissioned police cruisers burning rubber up Center Street.

"Flying up the hill. They'd throw that bomb, and we used to marvel at how fast those guys could drive. Cowards. Right up this hill," Drew says.

Those trips were so frequent that Center Street became known as Dynamite Hill, which was quite a distinction in a city that had its own notorious nickname: "Bombingham."

Birmingham historian Horace Huntley says white supremacists, with the power of the government and police behind them, were trying to intimidate civil rights pioneers.

"There were 40 plus bombings that took place in Birmingham between the late 40s and the mid 60s. Forty-some unsolved bombings," says Huntley.

"Bullet shots through the window [were] frequent. We had a ritual we followed: you hit the floor and you crawled to safety," she remembers. "Our house was bombed twice. My mother found a third case of dynamite in her garden before it went off."

Lee and her sister Barbara Shores recount those turbulent days in their book, The Gentle Giant of Dynamite Hill. Today, they are proud of their father's pioneering civil rights work. But as children, it took a toll.

"We couldn't even walk the one block to school because of threats, constant threats that were made on our family. I couldn't walk home from high school with other kids. That's all, when you get to be 13-years-old, what you want to do is to walk home with your boyfriend [and] stop by the corner store to get ice cream or candy or what have you," Lee says.

The way the girls were protected and taken everywhere by car made it difficult to cultivate friendships.

"It kind of made the other kids think that we were stuck-up or privileged. Couldn't give out my telephone number. So I just kind of resented that. I resented that a lot," Lee says.

Lee was so resentful she left Birmingham for college and wouldn't return for decades. But her father understood the battle in Birmingham was winning the larger war. That's why the family remained on Center Street after the first bombing in Aug. 1963.

During an oral history interview with the University of North Carolina in 1974, Arthur Shores describes the second bombing that took place, two weeks later.

After one bombing, a riot erupted on Center Street. People were throwing rocks and bottles at the police, who returned with gunfire. One man was shot and killed.

"Terrorism is nothing new to us.... It's a new term. We were terrorized back in the 50s and 60s almost every day. It was commonplace," says Jeff Drew, who still lives in the Dynamite Hill house where he was raised. Drew says his parents were close friends of Martin Luther King. He says that "Uncle Mike" spent many nights at his Dynamite Hill house.

And yet, despite the violence, the strategic meetings for the Birmingham campaign continued.

"I was with my dad at one time where the Klan called him and said, 'Nigger Drew, we gon' bomb your house tonight.' Dad said, 'What you call me for? Come on, come on. Do it right now. You don't have to call me. Just come on.' Hung the phone up. Dad was courageous as were other people up here."

Drew says the families on Dynamite Hill knew they were advancing a righteous cause.

"The Civil Rights movement was successful in making Negro-Americans a human being," says Drew.

Drew stands in front of his house that's perched near the peak of Dynamite Hill. There's a long, tall brick wall that is now covered with vine. It's a wall his parents erected to deflect the bullets and bombs. He hasn't torn it down.

"This wall was built as a testament not to fold in the face of violence and terrorism," Drew says.

Drew is joining Birmingham's year-long commemoration of events 50 years ago, and is dedicating himself to the work begun by his parents and their neighbors on Dynamite Hill